I jammed on the breaks.  The needle drops from 75 mph down to 45 in a very short space of highway. Everything from the back of the RV moved forward.  Scott calmly took off his headphones, looking at me.  Him, “Yes?”  Me (bouncing in the driver seat), “Quick, quick! Look out the window!!  Look!  Look!  Look!”  Scott (dryly, slowly), “Ok, I see it.  And what are you doing?”  Duh!  “Getting off the highway!!”

Because I was driving (which is fairly rare when Scott’s around) I hadn’t done a proper map recon.  I was totally blindsided by Cadillac Ranch … one of those obvious, cool, must-stop places that I would have been excited about had I known to be looking. 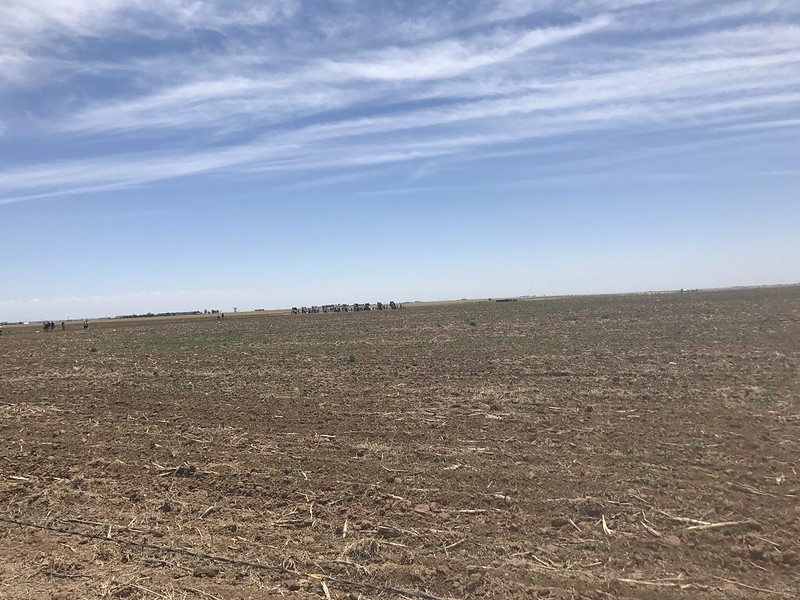 Look, I know a cool roadside attraction when I see one.  I wasn’t about to blow past this.  Grumpy Pants out back wasn’t happy about the extra 30 minutes and pulling sudden Gs, but by the time he was spray painting cars in an art exhibit that’s been going since the 70s, he silently agreed that I was right (I could see it in his eyes).

I can’t explain it any better than Roadside Attractions:

“An aristocracy of roadside attractions has been raised over the years: glorified in photo essays, calendars, blogs, and social media fiefdoms; spotlighted in video and film; instantly recognizable as icons. These Great Monuments, we are told, represent America’s hopes and dreams, art and commerce, materialism and spiritualism, folly and fame.

Standing along Route 66 west of Amarillo, Texas, Cadillac Ranch was invented and built by a group of art-hippies imported from San Francisco. They called themselves The Ant Farm, and their silent partner was Amarillo billionaire Stanley Marsh 3. He wanted a piece of public art that would baffle the locals, and the hippies came up with a tribute to the evolution of the Cadillac tail fin. Ten Caddies were driven into one of Stanley Marsh 3’s fields, then half-buried, nose-down, in the dirt (supposedly at the same angle as the Great Pyramid of Giza). They faced west in a line, from the 1949 Club Sedan to the 1963 Sedan de Ville, their tail fins held high for all to see on the empty Texas panhandle. “ 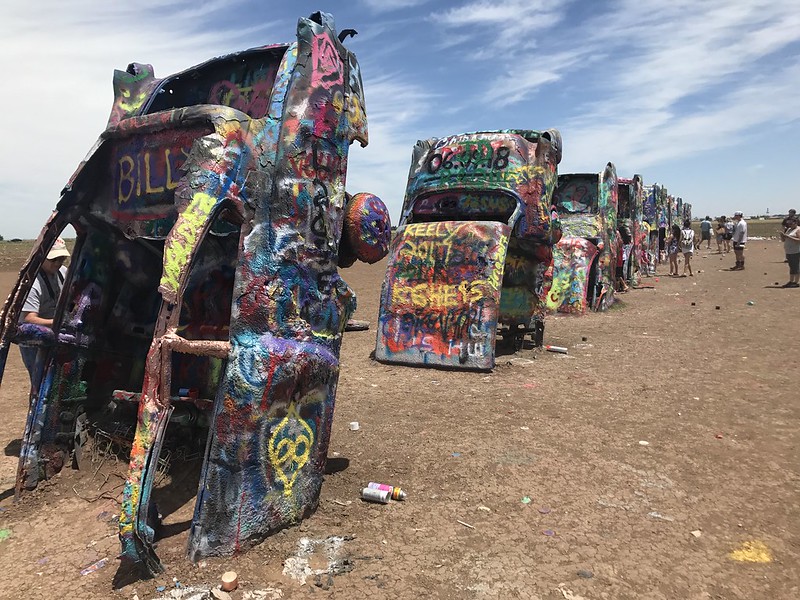 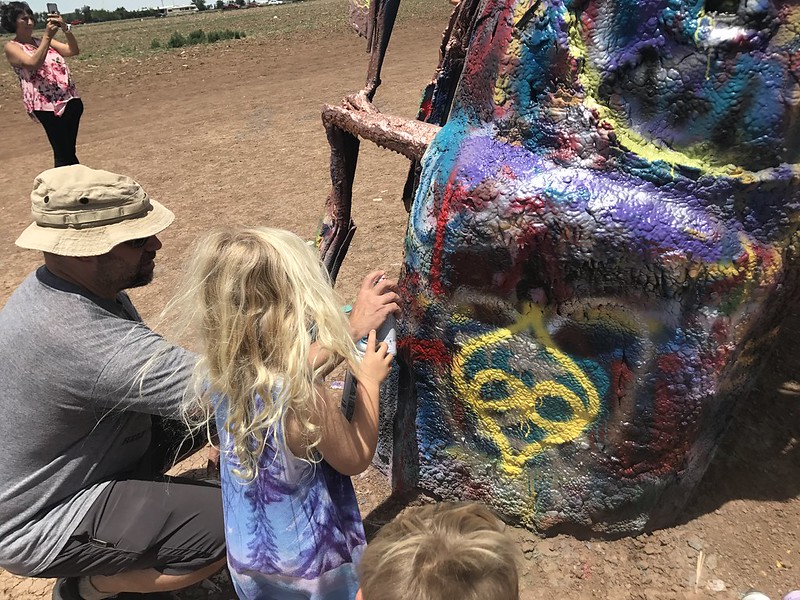 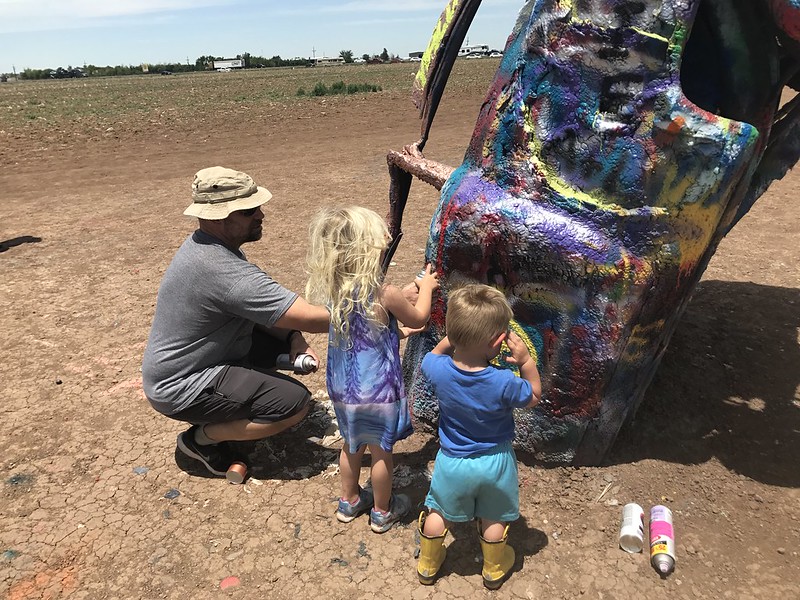 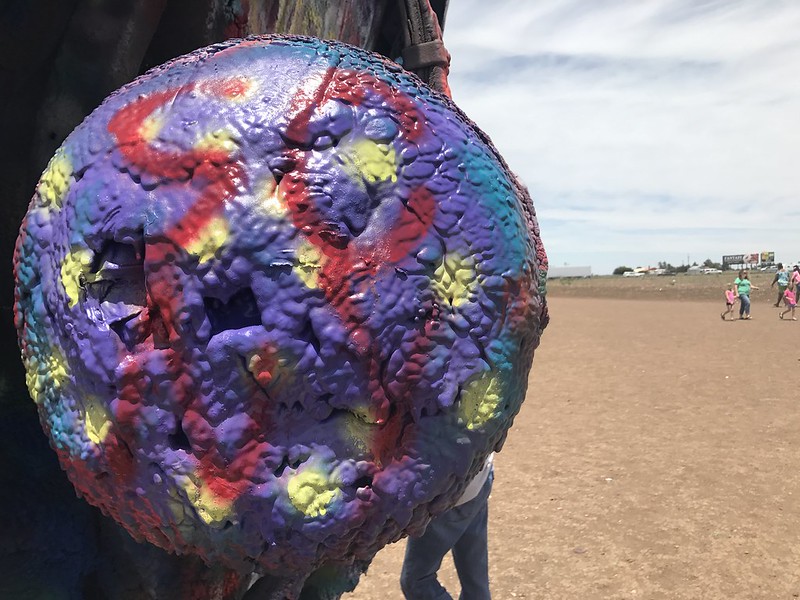 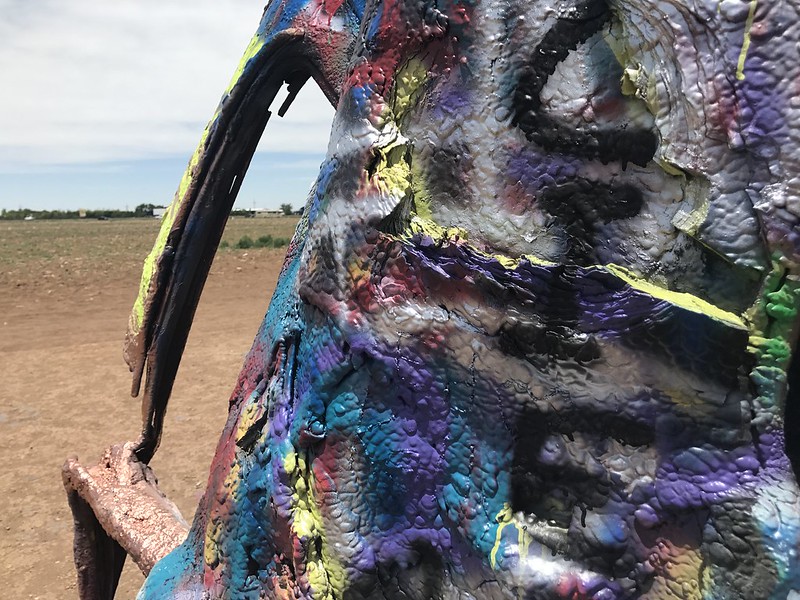 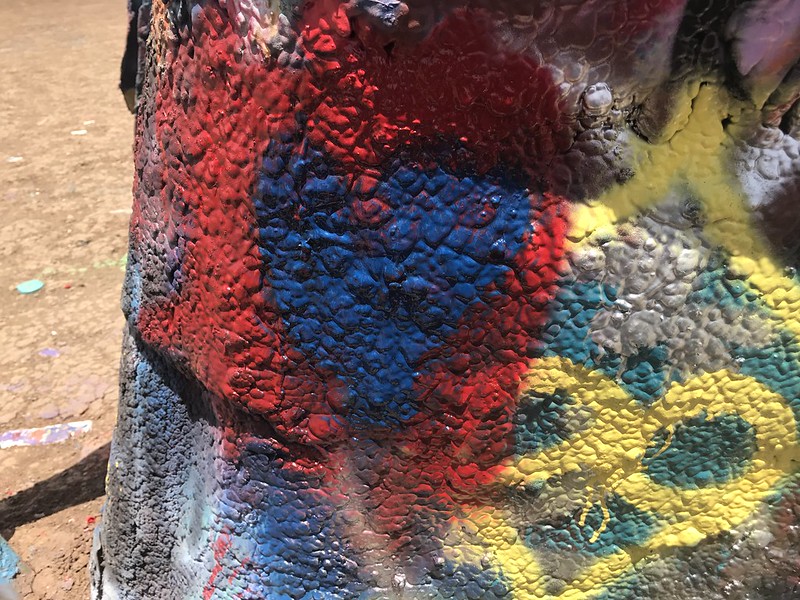 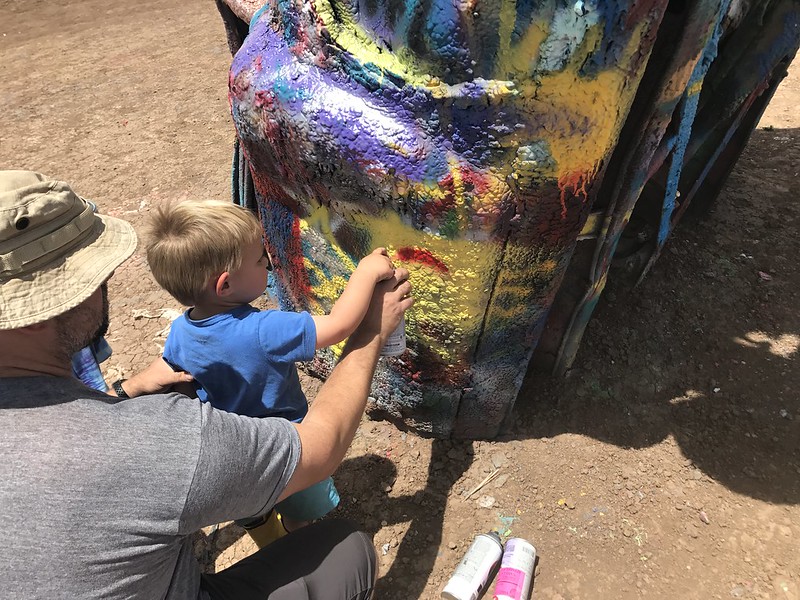 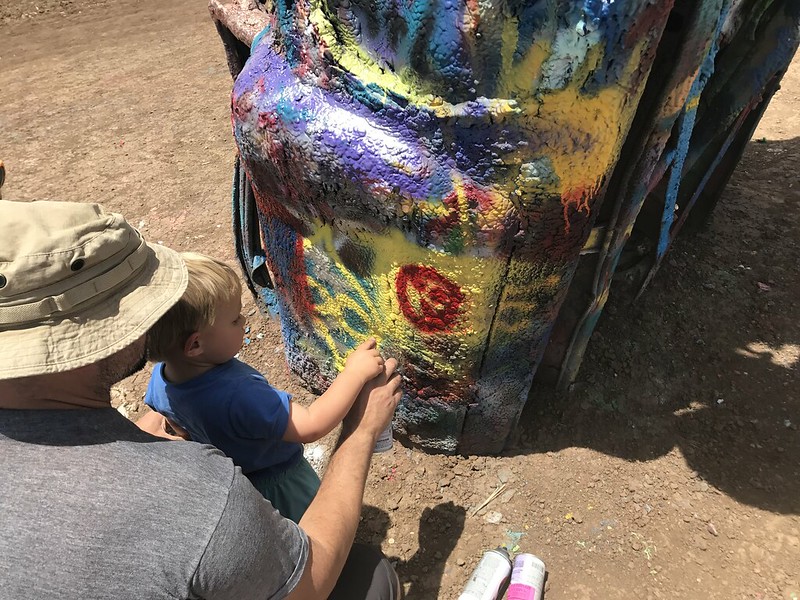 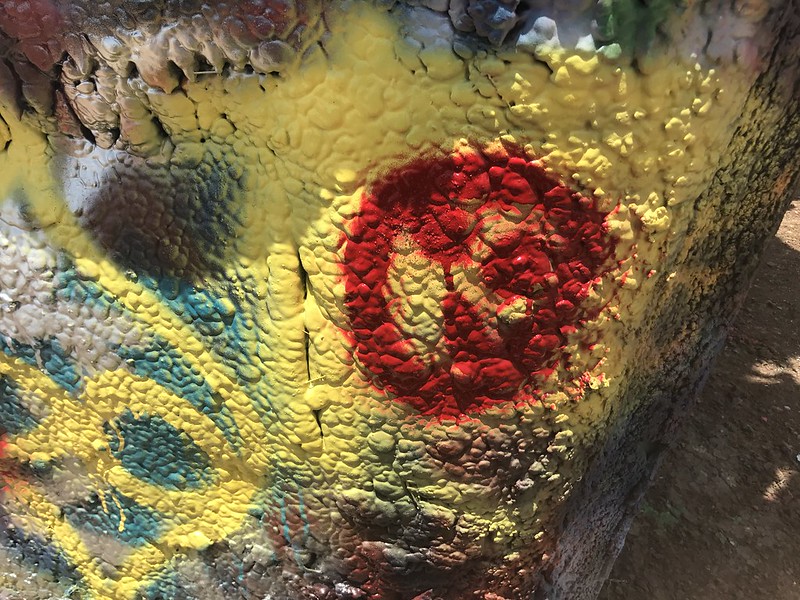 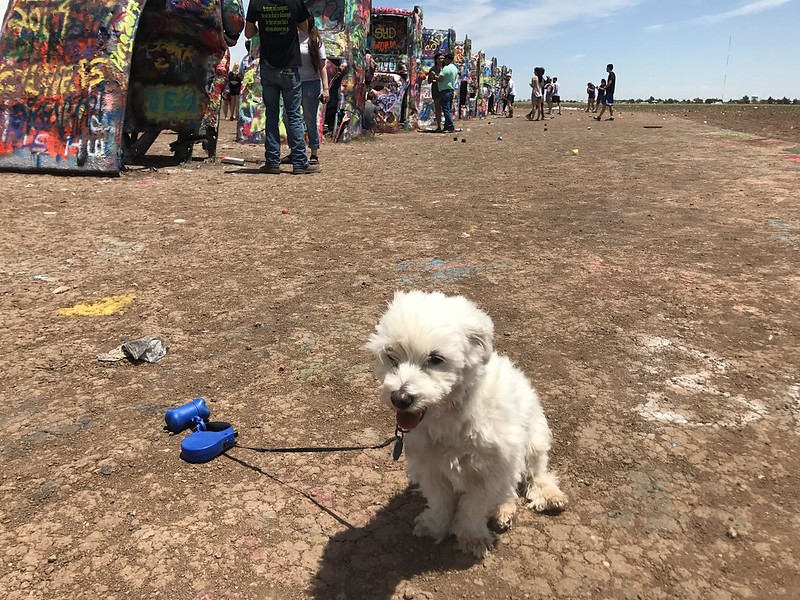 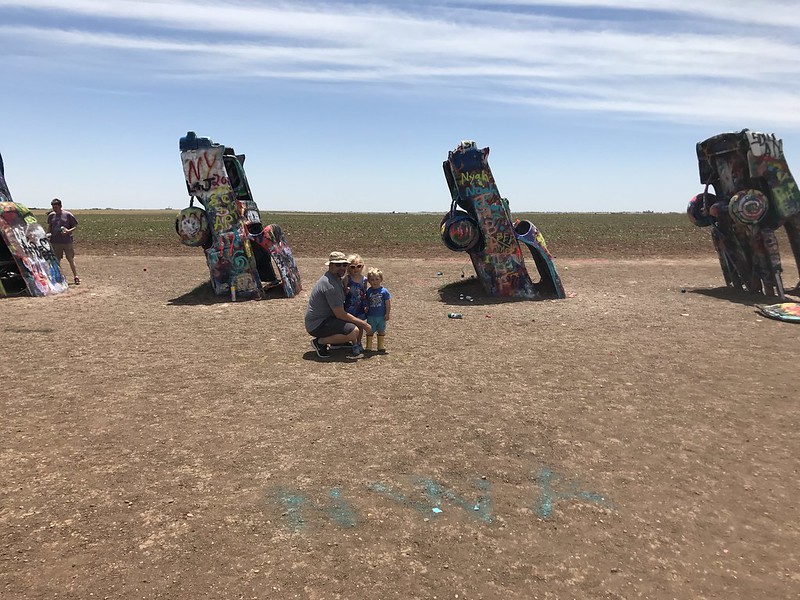 This was a perfect mid-day picnic spot.  I couldn’t have planned it any better if I’d tried.  It was definitely a karma high five.  So glad we saw it! 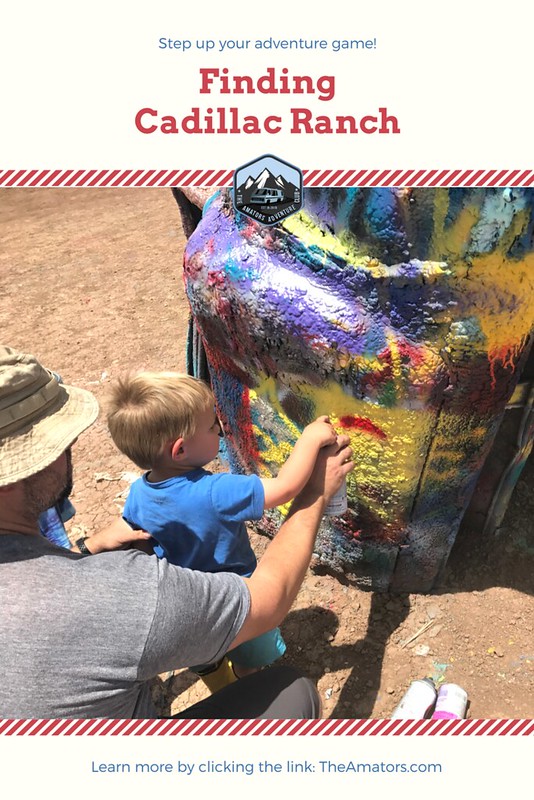 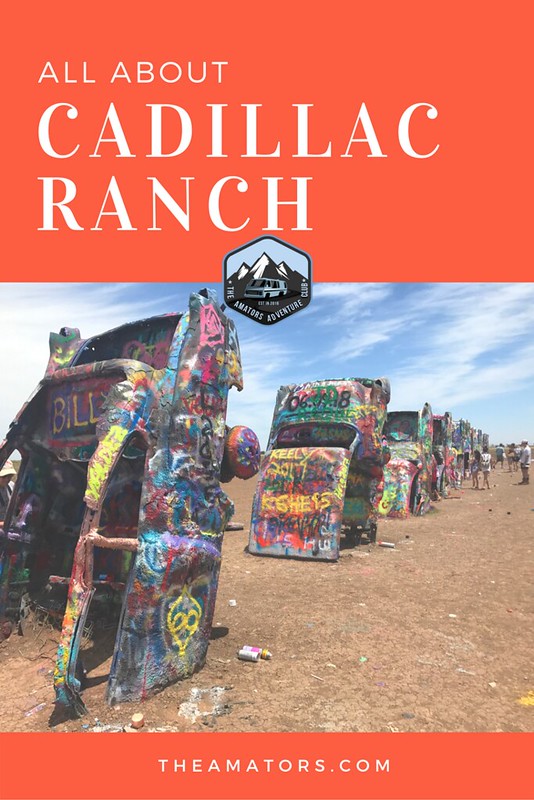 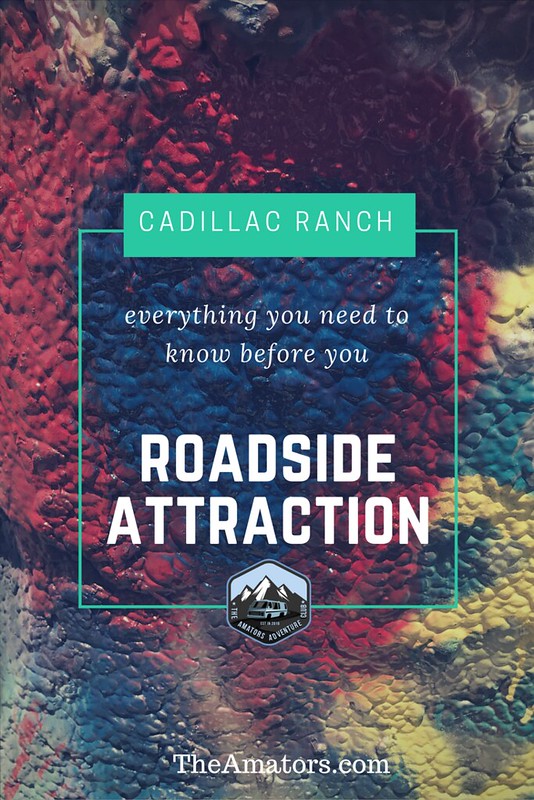 The updated life plan. Scott, the kids and I loved RV'ing around the U.S.  I describe it as epic.  We plan to do it again when the kids are a bit older.  The next time we'll hit the Pacific northwest,...

Not surprisingly, I may have made yet another mistake.  I usually take them in stride now, but this mistake bugs me a little bit.  It has to do with hair. Earlier today, Evie pulled me aside from all the excitement...

It turns out we were wrong - you and I.  In all fairness, not entirely wrong but we hadn’t hit the nail on the head.  Everyone thought the Chief looked so much like the RV in Breaking Bad… and wasn’t...