Not surprisingly, I may have made yet another mistake.  I usually take them in stride now, but this mistake bugs me a little bit.  It has to do with hair.

Earlier today, Evie pulled me aside from all the excitement and action at Grammy and Grandpa’s house.  Evie to me {with hesitation}, “So, who’s going to do my hair?”  Me, “Grandpa and Daddy, Honey.  This is a special class to teach men how to do their little girl’s hair.  A woman is going to teach them and they’re going to practice on you.”  Evie to me, “O……….k.  But they’re not going to cut it, right? And they’re not going to do anything weird to it?!”

There it is – that last bit.  That’s my mistake coming back to haunt me.

Raising a young lady today is a tricky high wire act.  You wanna let little girls be little girls – whatever that means to each of them.  (Likewise for little boys.)  If it’s pink and frilly, let’s do frosting and Barbie.  If it’s mud and frog guts, let’s get dirty.  You don’t want to inadvertently instill sexist stereotypes.  You want to encourage leadership and foster critical thinking all the while nipping know-it-all and all-about-me in the bud (because no one wants to grow one of those).  I even have to be careful about what I say about how/why I’m losing weight lest we walk ourselves right into the body image DMZ.

Being the ‘candid’, often sarcastic person that I am (my self-assessment), I have to pay close attention to what I’m saying.  That is an enormous task.  Those little ears are turned on 24/7.

Pretty and its first cousins cute and adorable are the most treacherous for me.

Here’s the problem, I have mom-goggles.  That doesn’t embarrass me one bit.  I think Evie is cute, adorable and, yes, pretty.  (I also happen to think most kids are cute, adorable and pretty unless they’re pathologically mean, rude or unbearably annoying with a high pitched voice and a desperate need for unconditional attention.  Then they become ugly and I get mean.)

I have made the mistake of telling Evie that her hair is pretty one too many times.  It’s because I really like her hair.  Scott and I both had blonde (free of charge) until our teenage years.  “Enjoy it now, Honey,” always starts my warning. “Someday you’ll have to decide between dishwater brunette and a ridiculous amount of money for often brassy, not-quite-right blonde.”  And those ringlets… yeah, I’ve been brutally honest about those too.  Once they get cut off, those baby curls are gone for good.  My thought was that I wanted to be crystal clear ahead of any sort of scissor happy situation.

Unsurprisingly, she’s proud and protective of her hair.  Is that bad?  I don’t know.  Maybe.  She’s almost 5.  Should she care about her hair?  Probably not?!  Maybe?!  Is telling her that her hair is special vanity?  I don’t know.  I hope not… because I did that.

For the record, I also overly praise her problem-solving ability, initiative, tenacity, curiosity, compassion, and kindness with specific examples.  I’m not a total and complete dummy.  I swear I read articles and books on how to raise a good person.

Maybe I overthink these things sometimes.  Better that than not caring, right?!

Anyway, she had a wonderful time at the Daddy, Daughter and Grandpa Day at the barbershop.  It’s quite possibly the most clever little class I’ve encountered.  They had a craft table set up for the girls with anything and everything to glitter and glue.  Instruction for the men was followed by a cooler of ice cold beer brought out for a little bit of earned relaxation and socialization.  (Side note:  sometimes I think it must be nice to be a man…. you get rewarded with beer for a stressful {?} couple of hours learning how to fix hair?!?!!? )  Now we have a Daddy AND a Grandpa that can whip up a french braid if the going gets rough.  I’m not sure if this is a nation-wide effort or a local thing, but either way, I highly recommend it.

The pictures from Hair Day.  All hairstyles are courtesy of Scott, modeled by Evelyn: 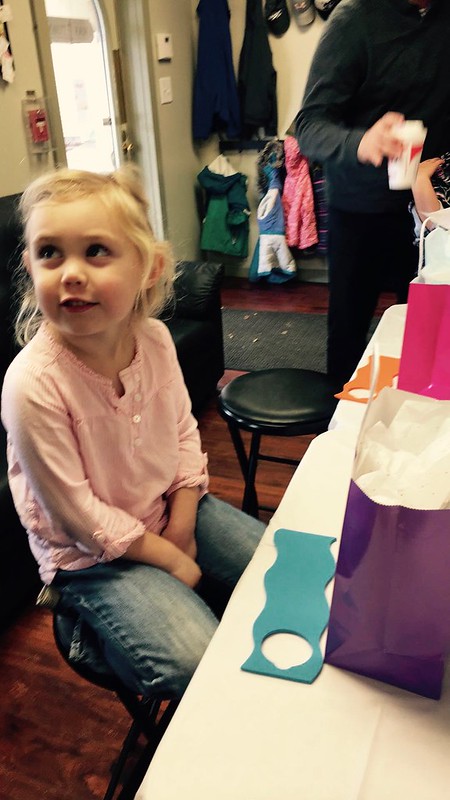 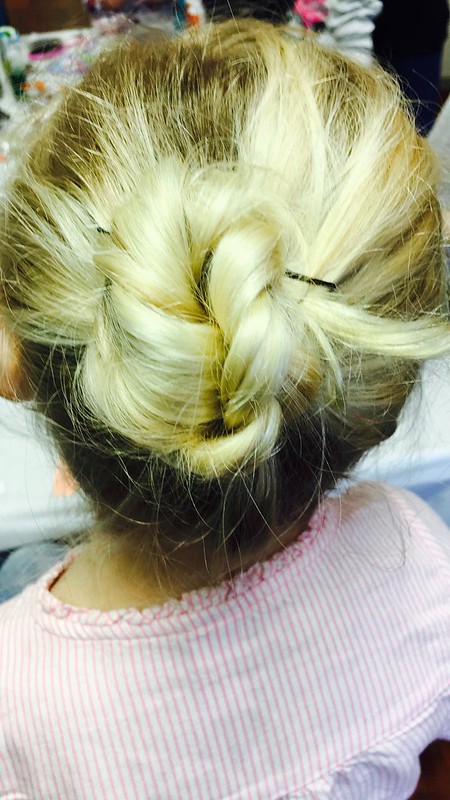 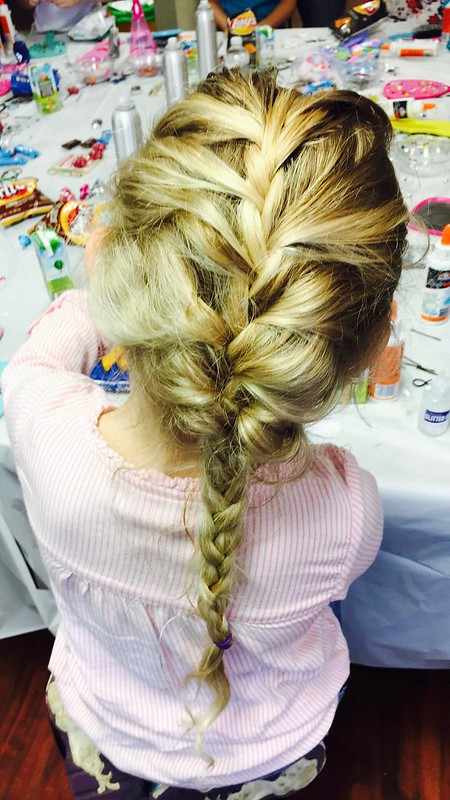 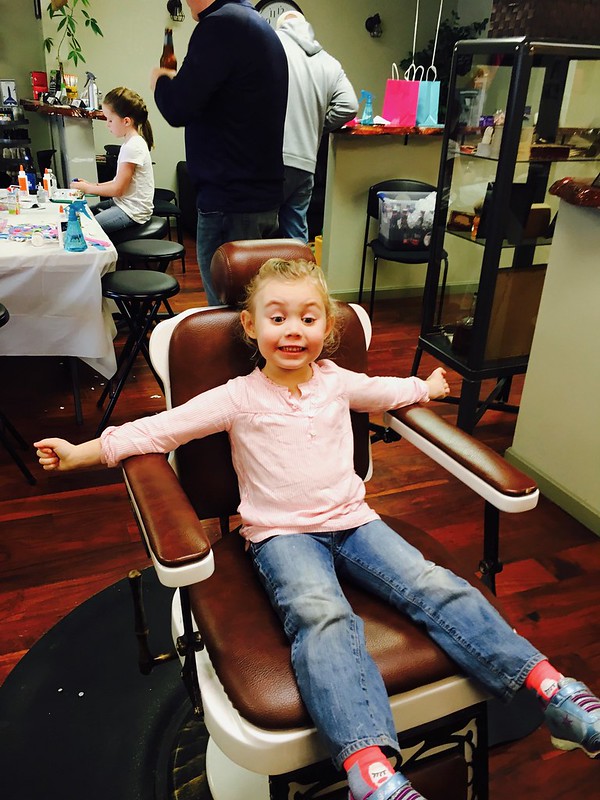 Since this is a hair post and I recently stumbled into Scott’s senior year photos, let’s go ahead and add those.  I held a caption contest on Instagram and boy did it deliver! 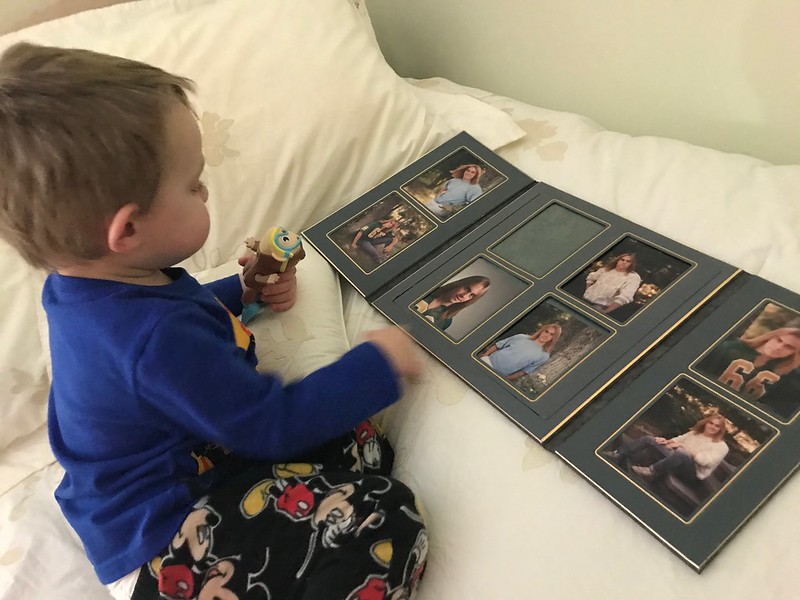 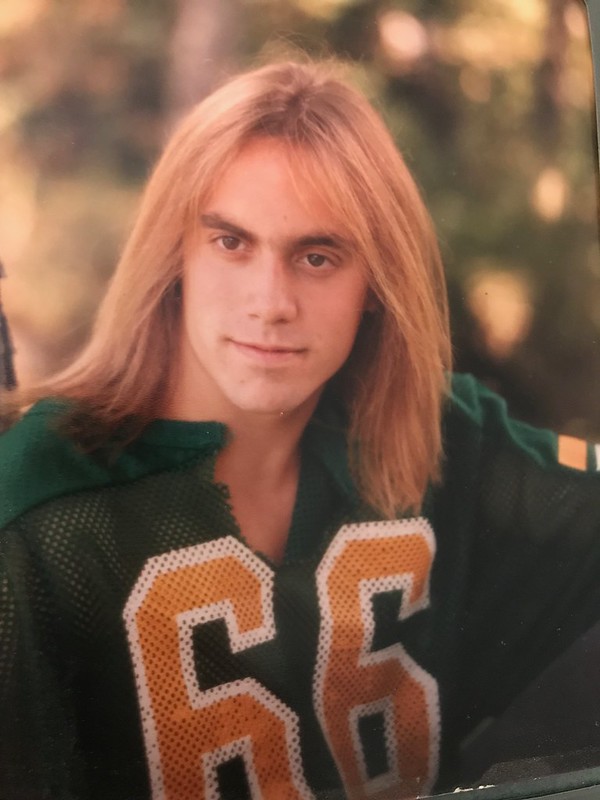 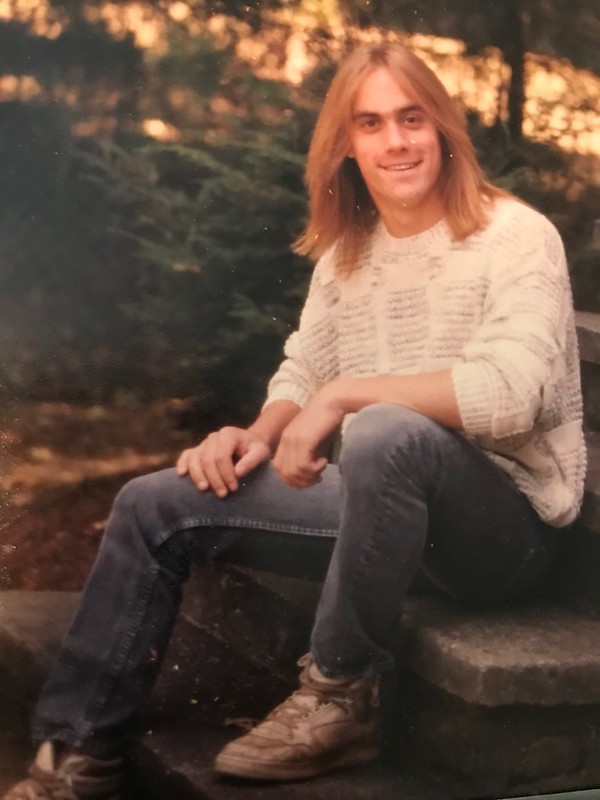 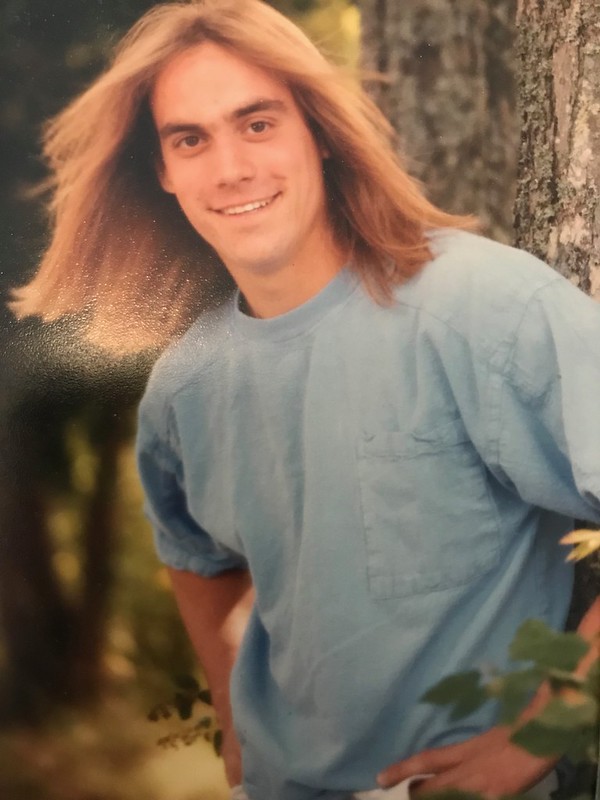 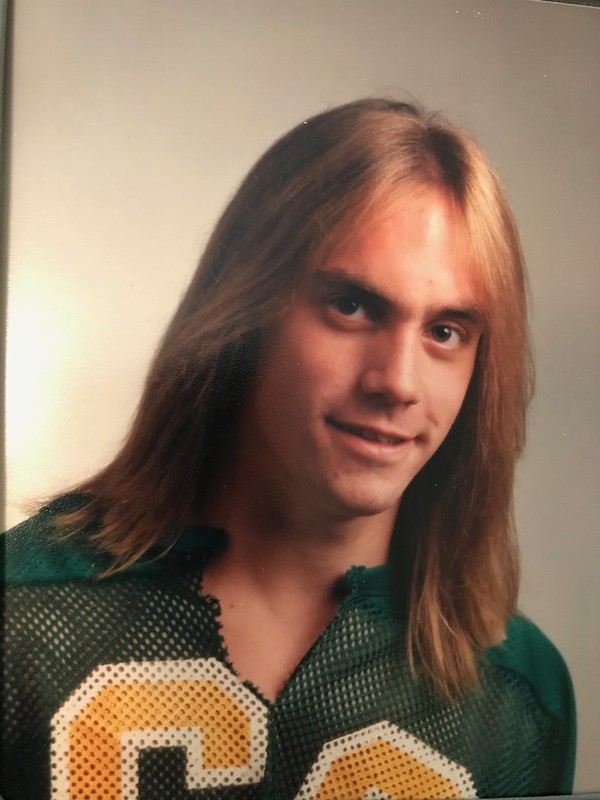 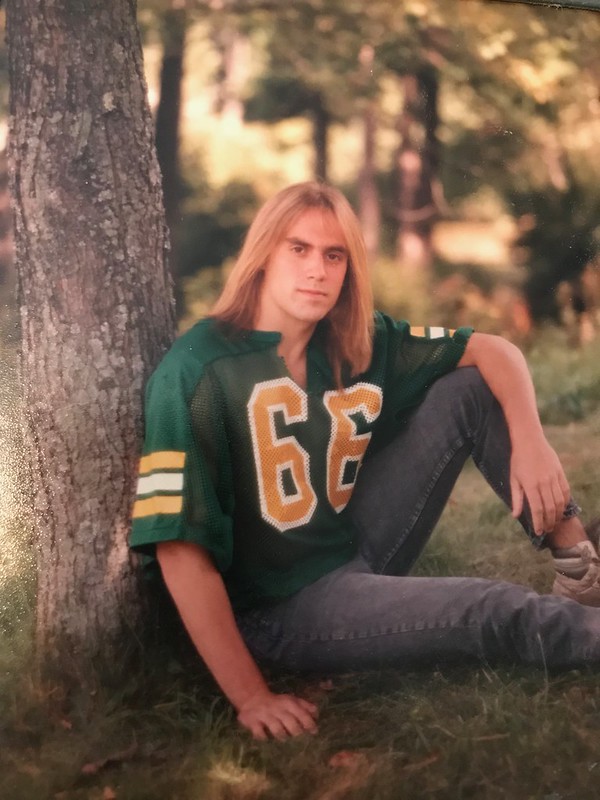 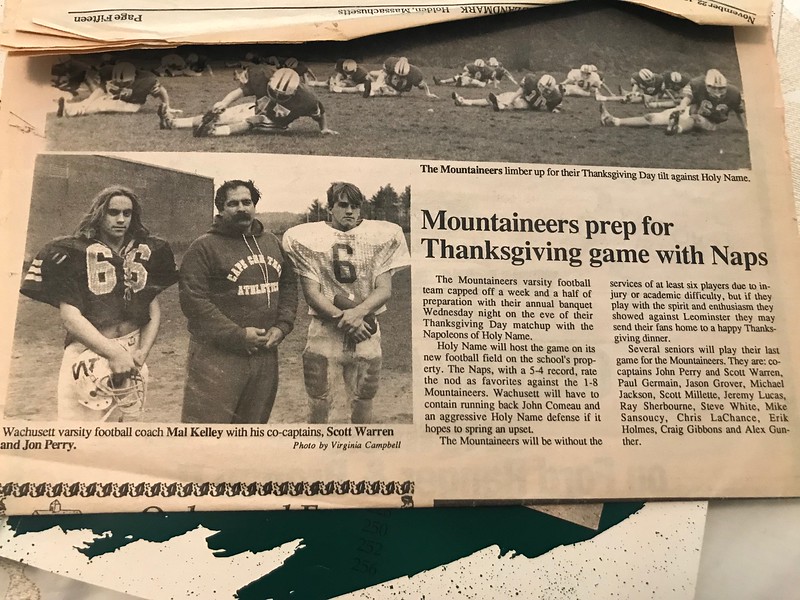 More photos from our last couple of weeks.  Evie is starting to sound out words like a champ: 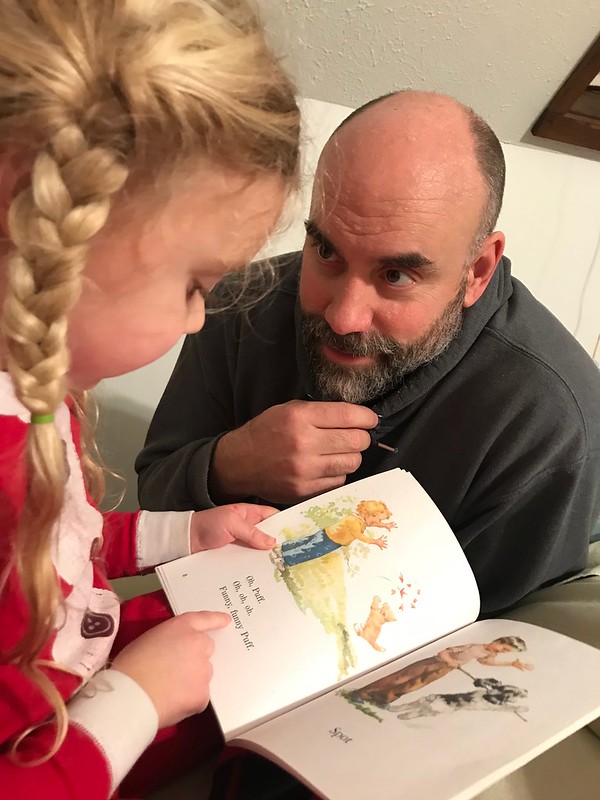 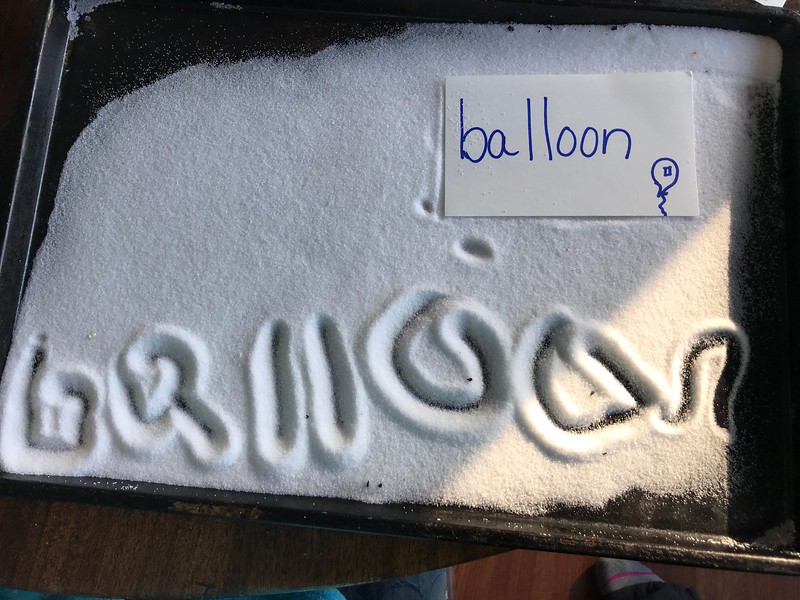 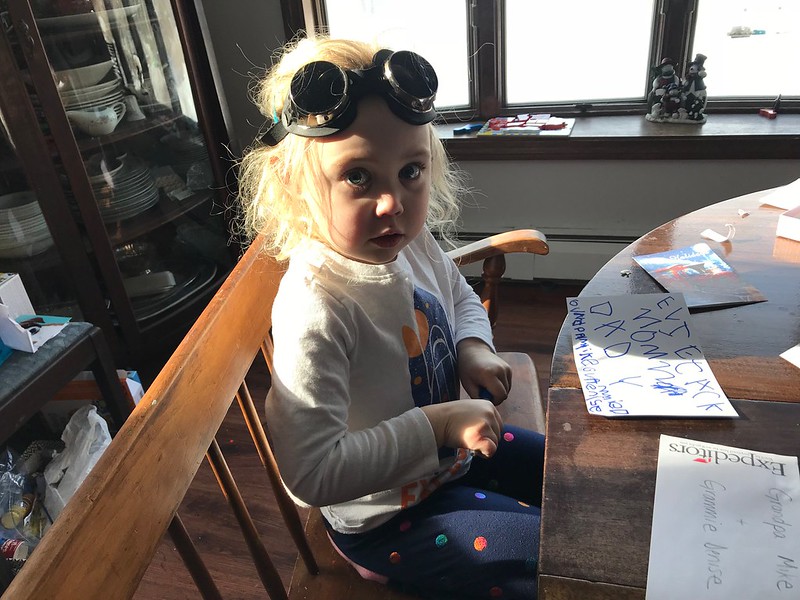 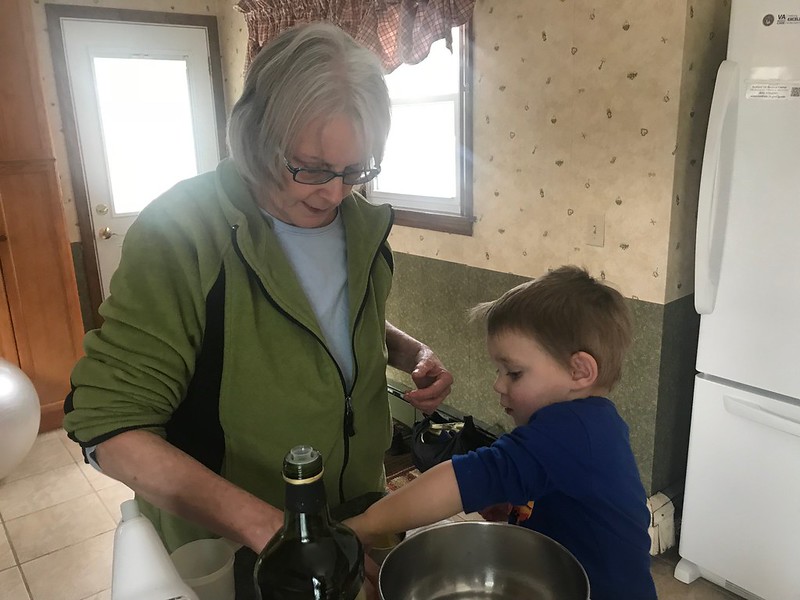 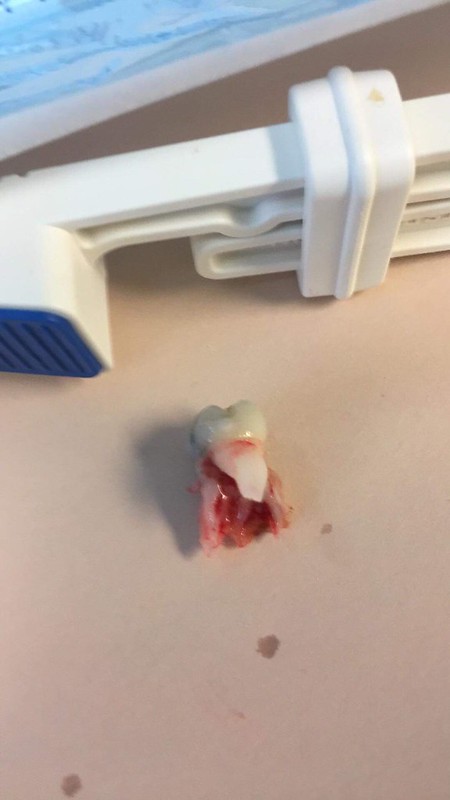 Evie’s tooth got infected so it had to be pulled.  She had her first visit from the Tooth Fairy.  Now she has a place holder in that spot until her 12-year-old molar comes in.

With a little time to kill in Cincinnati, we decided to hit up Smale Park. It was mentioned in several places as a nice afternoon outing.  That's a huge understatement.  This place is awesome.  At this point we're park connoisseurs...

I just received what may well be one of the best compliments of my life.  That's not hyperbole (I hate hyperbole).  It's legit.  I'm still a little floored. I was getting the kids ready for bath time.  For us, this...

"I love rest areas," said no one, ever. But dang if we didn't find one that's worth a shout out. Is there someplace that collects the Best of Rest Areas? A connoisseur of highway turn outs? If so, I heartily...