oddPicturesRepairsRV InfoThe Story of Us

Heading south (for the sun) and west (to California) we’ve been seeing some eclectic parts of New Mexico.  There’s some really out-there stuff in this State.  Prove it?  A town name Truth or Consequences.  Why would a town hold a contest to name it?  Weirdos.

How about this horror movie gas station: 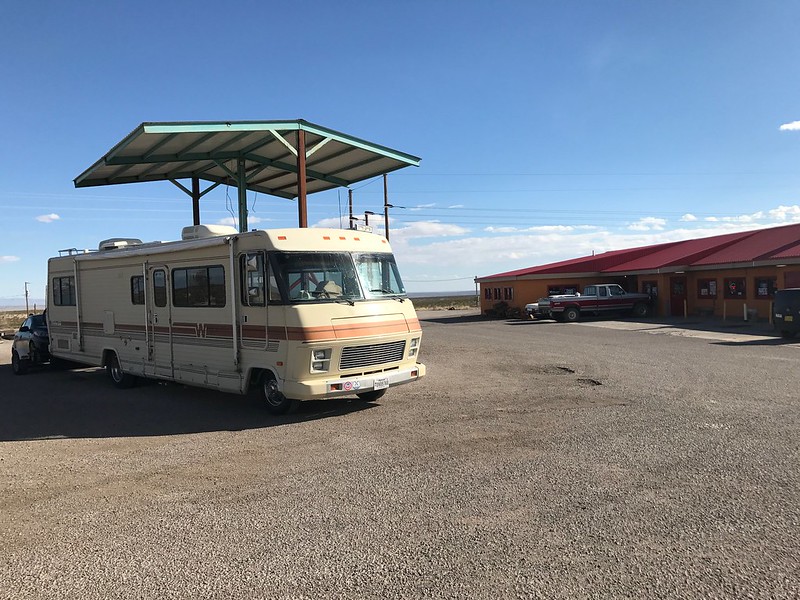 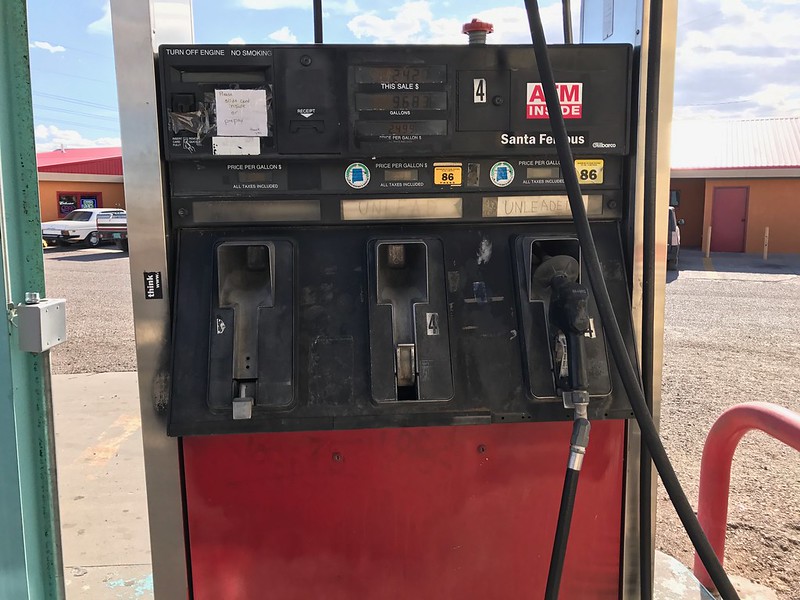 I was desperate for gas.  I pulled into this monster.  Every single pump (or rather… of those that had nozzles) only had 86 octane.  That doesn’t even exist in New England.  Normally we put the super good stuff in the Chief.  I walked inside to pay and the building was literally sewed onto half of a train car (in the backside so you can’t see it in the picture).  It was a diner/bar/night club with a cast of characters straight out of the Star Wars bar scene.  I paid for $25 and ran.

Then there’s Hatch.  Yeah yeah…. I know… Hatch chilis are the best.  But explain this place in the middle of town?!  What I want to know is this – is this meant to be a threat? Warning?  Sick sense of humor? 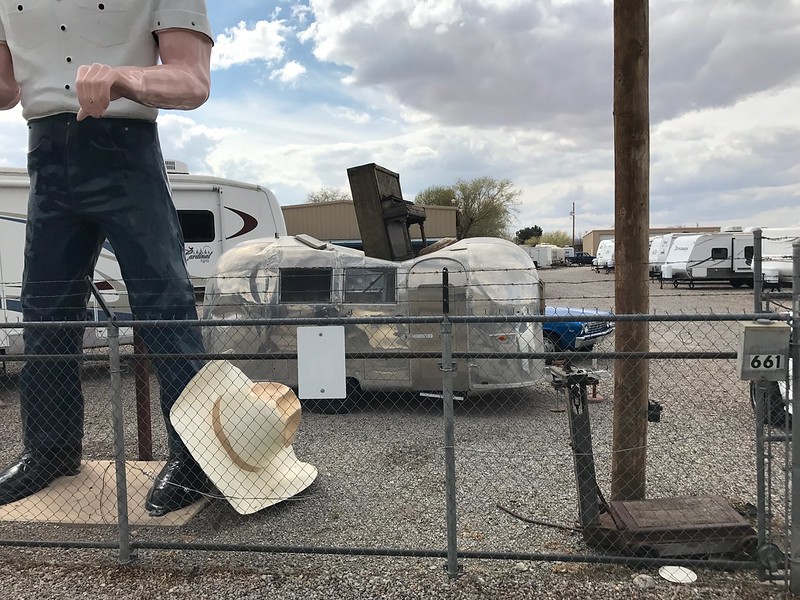 And we made the obligatory pepper stop. 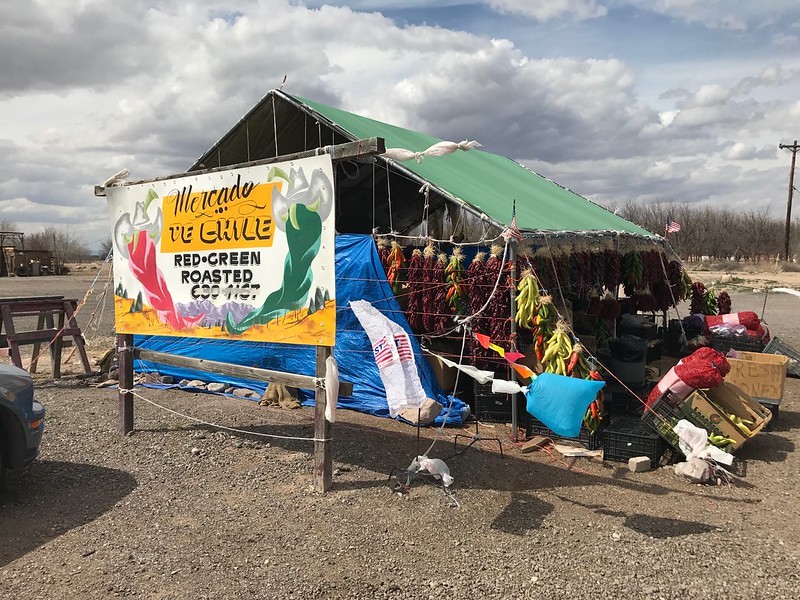 While driving through all that,  I had an unsettling conversation with my mom.  There’s a clanking going on in the Chief.  It sounds like it’s coming from under the driver seat.  It doesn’t happen in response to the suspension (which was my first guess).  Scott knows about it…. it’s been happening for awhile now but it seems to be getting worse.

Mom talked to WCE president, otherwise known as my brother, and her casual explanation of his guess at the problem made my skin tingle and my heart skipped a few beats.  Essentially, if it’s the universal joint and it breaks the RV won’t move “another inch”.  Period.  Dead in the water.  Ummmmm…. come again?!  Let’s go ahead and clarify this a touch more before we drive through the never-ending desert that is Arizona and southern California.

I personally called my brother.  Yes, while driving.  There was no one else on the road and this suddenly became Priority One.

After talking to him, we picked an early campground and pulled in.  I didn’t want to, but I got on my hands and knees… and then my belly… and inched my way from the back of the RV all the way to the front.

Observations:  It’s dirty and gross under the RV.  There are no spiders.  The drive shaft is solid as a rock before and after all 3 joints.  There appears to be only 1 drive shaft.  I also grabbed the muffler pipe to try to move that for good measure.  There is no play.  I guess things were still built to really really last in the 1980s.

At this time (and this is subject to change) I do not believe the universal joint is the problem.  My next stop is to take it to a truck repair so they can put it on a lift to see if they can identify the problem.

Google made this video of my afternoon and I laughed so hard I posted it on my account.  There’s nothing like a good, unflattering backside up in the air for a hearty laugh! 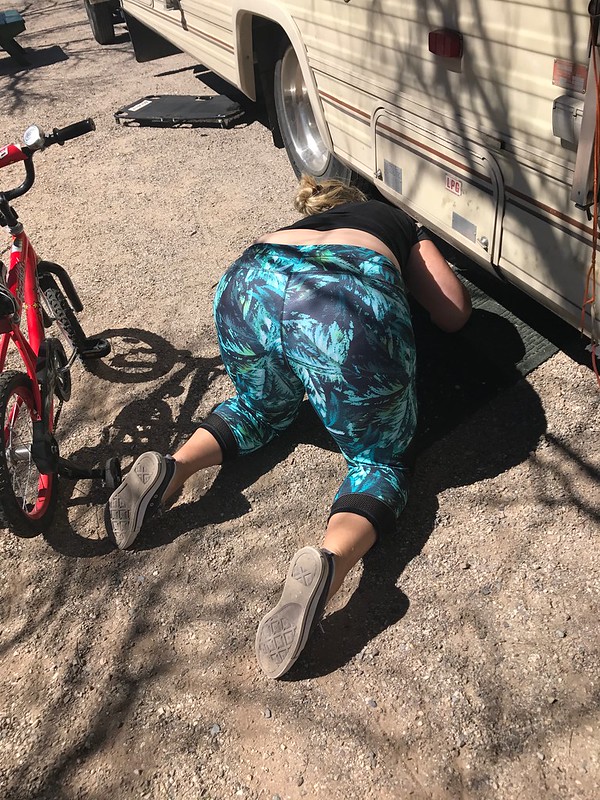 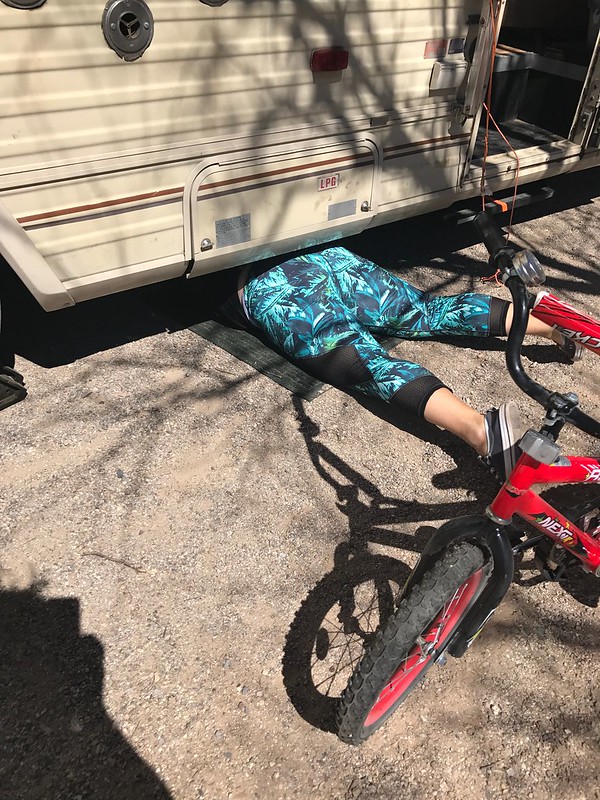 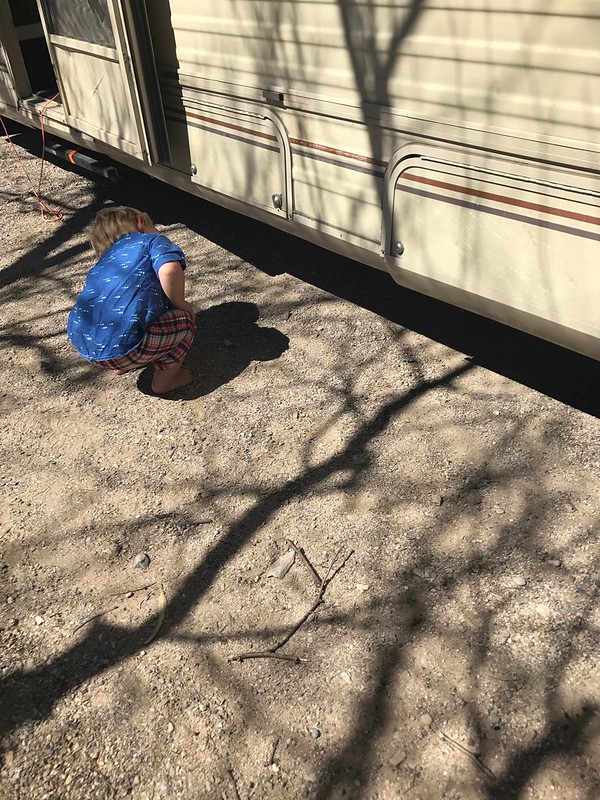 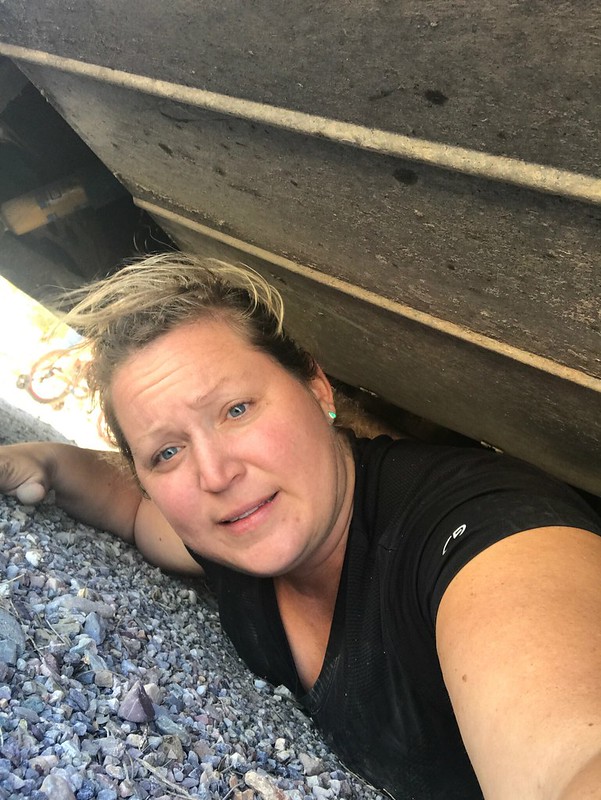 Since we’re on the topic of issues… here are the rest of the potential points of failure I’m monitoring:  a slow leak in the rear suspension.  I think it’s on the passenger side.  It pumps up nicely when I turn it on, but it shouldn’t be losing all the air after 1 night. The black tank sensor is off.  It may have something to do with the fact we haven’t been entirely level some nights.  I pretty much know when it needs to be emptied but I’m being conservative on my guestimates.  Finally, I lost the little water regulator and it was almost impossible to correctly attach that to the water input so I’m just filling up the water tank and using that (even when we’re in a park).  Being tired and dangerously close to becoming a bear…. I’m taking that part easy on myself.  It’s only for a month.  Scott can get it all set up right when he’s back. 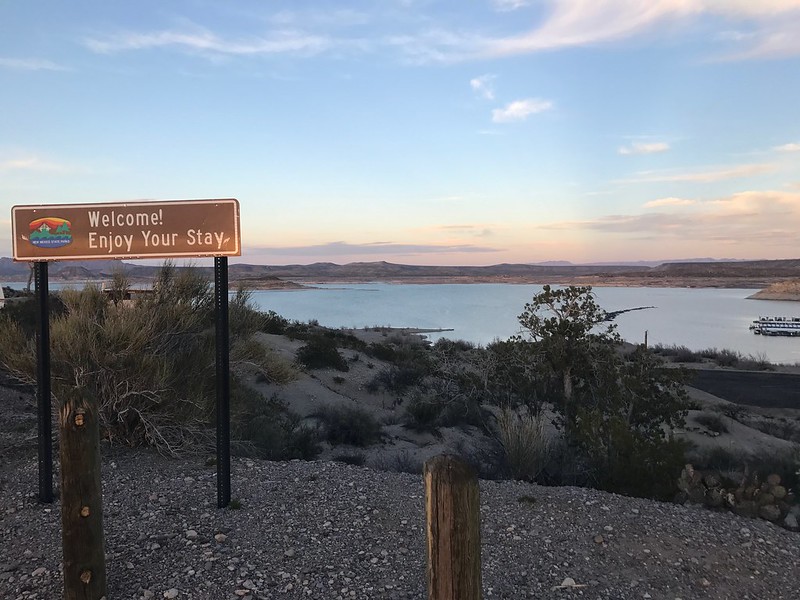 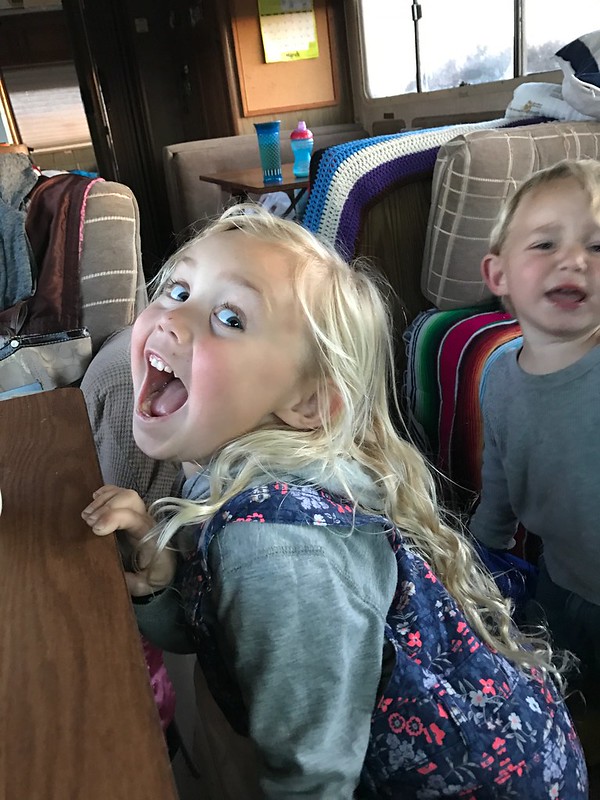 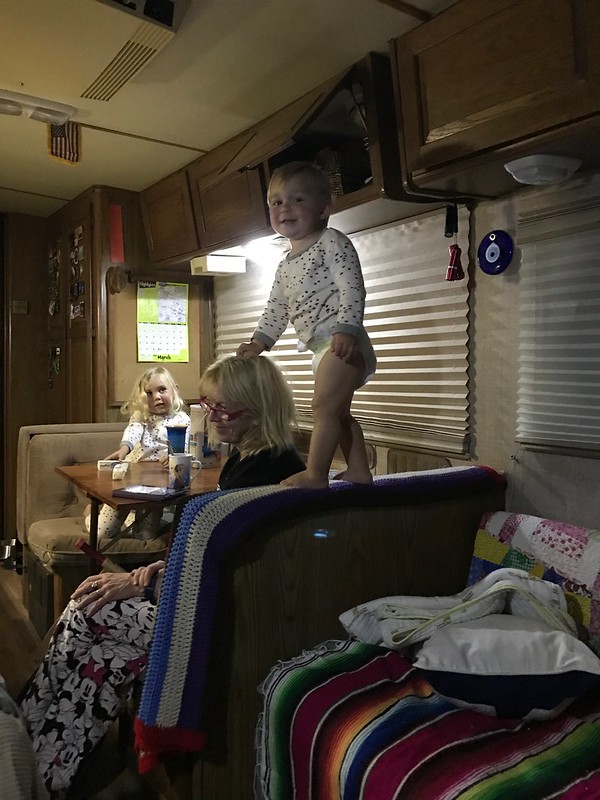 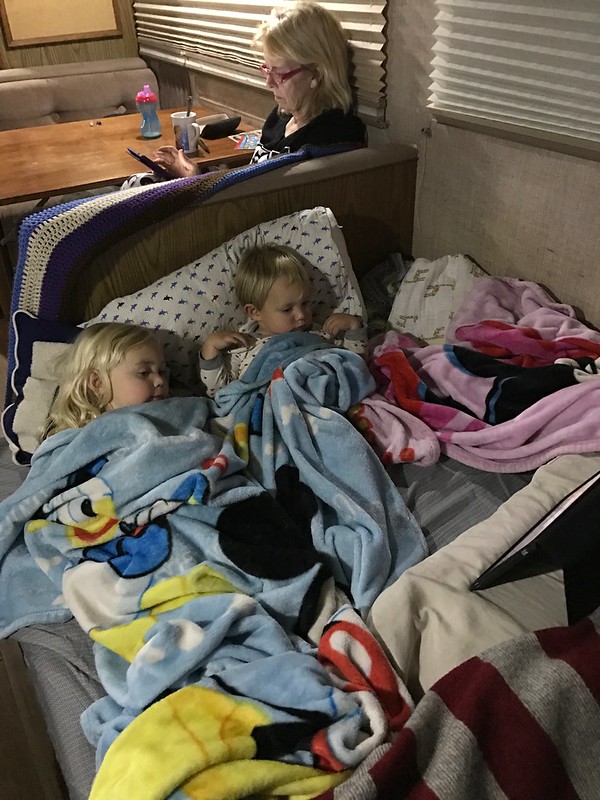 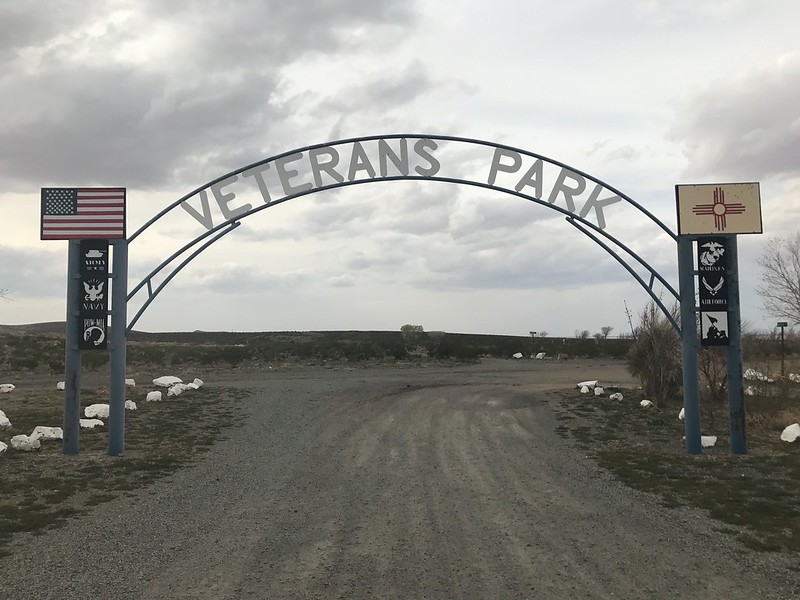 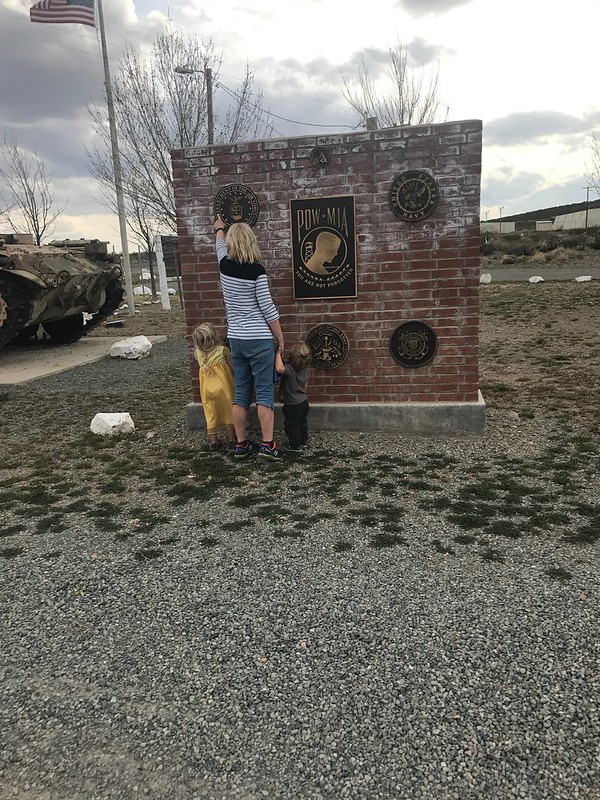 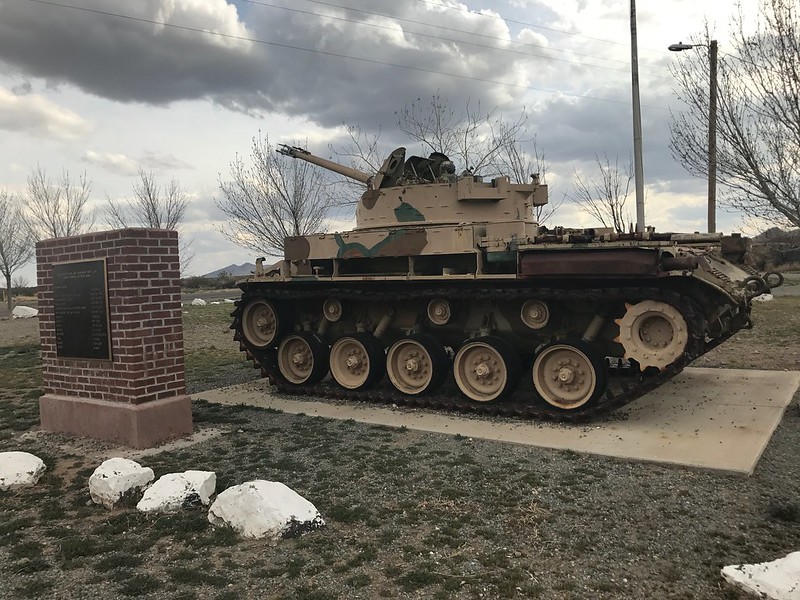 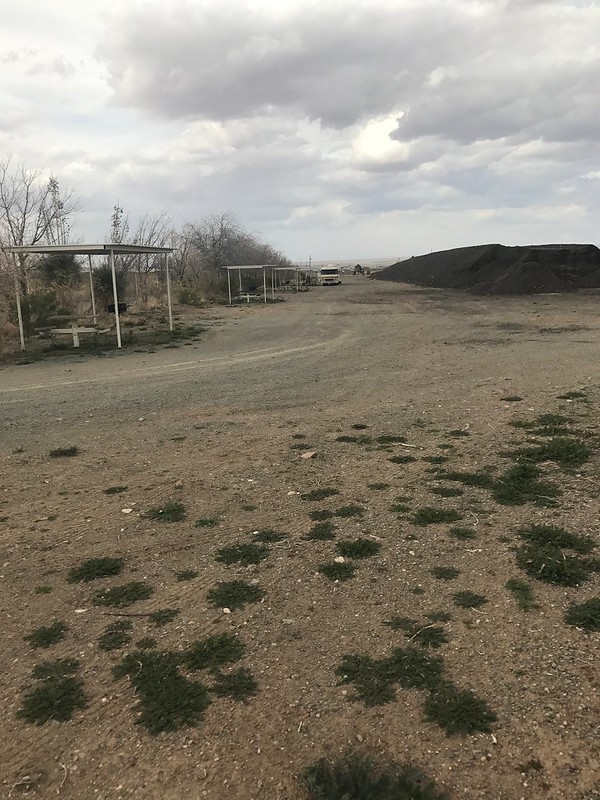 If I have a superpower, it’s picking the cream of the crop when it comes to friends.  Seriously.  It’s my strength.  (I also collect weirdos, misfits and creatives so... you know... if you’re reading this and we're buds, just know...