All hell broke loose – just as I expected.  The kids were screaming and there were real tears.  Leaving Auntie Ang and Uncle Brock’s house was a complete s—show.  Mercifully, no one was there to see it (although I’m sure the neighbors got an eye full).  I absolutely believe that the kids are loving this year and their little brains are absorbing so much about the world.  However, they also miss having a routine and being near friends and family.  I know the former from intuition and the latter because Evie tells me … all… the… time.  Having her aunt and uncle, her grandmother and her personal rockstar – Nathan – in one place at one time {for an extra long weekend} was like Disney wrapped in a candy cane bow on Christmas morning.  But we couldn’t stay with Ang and Brock forever, no matter how much it was discussed. 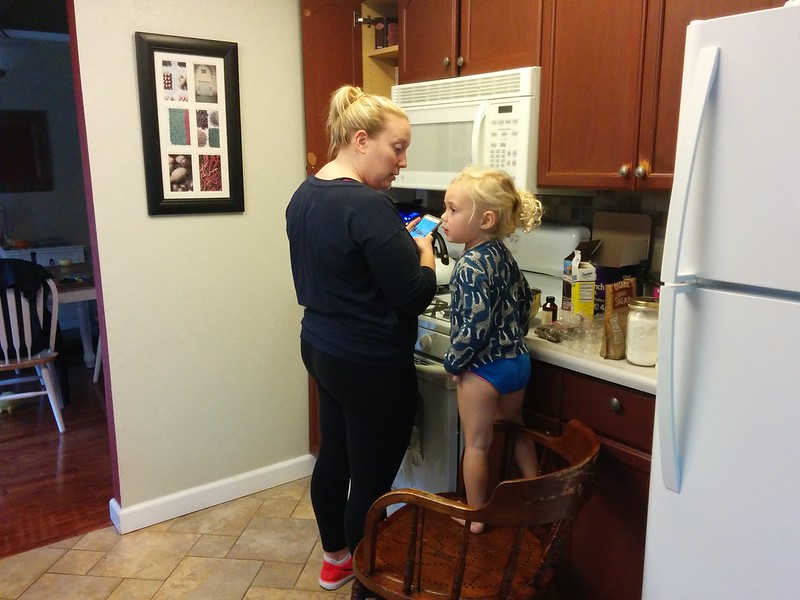 Making chocolate chip cookies together (why doesn’t she want to wear pants?  No idea) 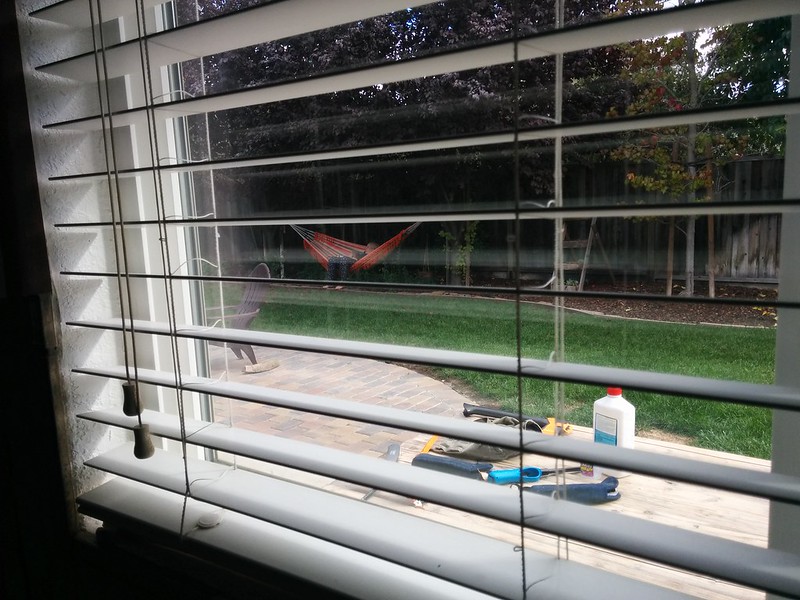 Auntie Ang and Jack in the hammock outback. 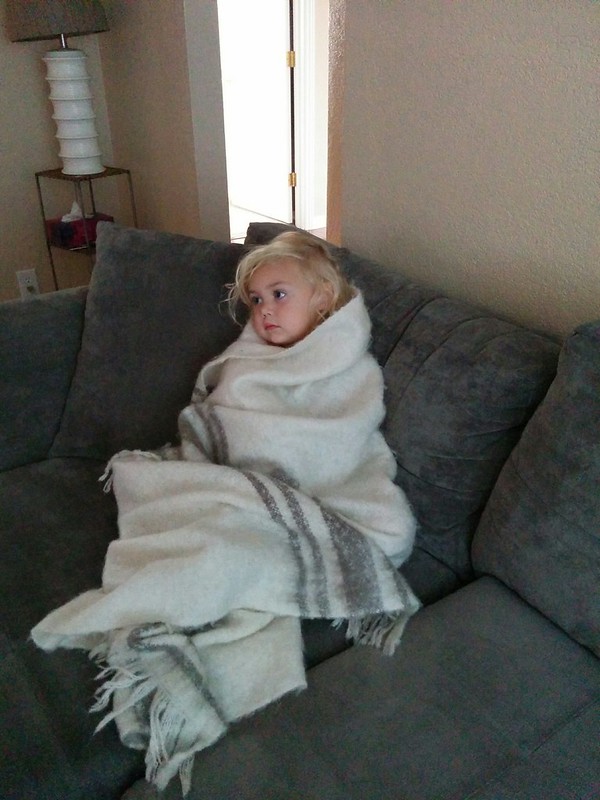 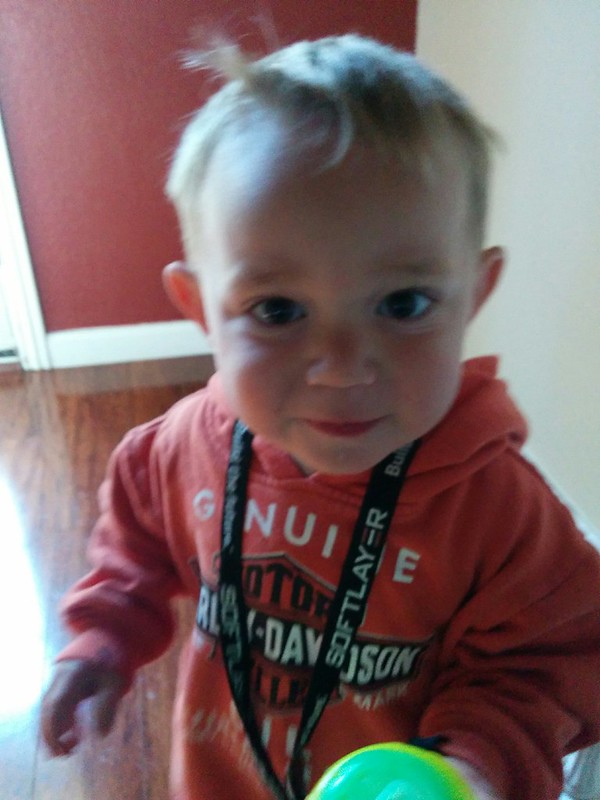 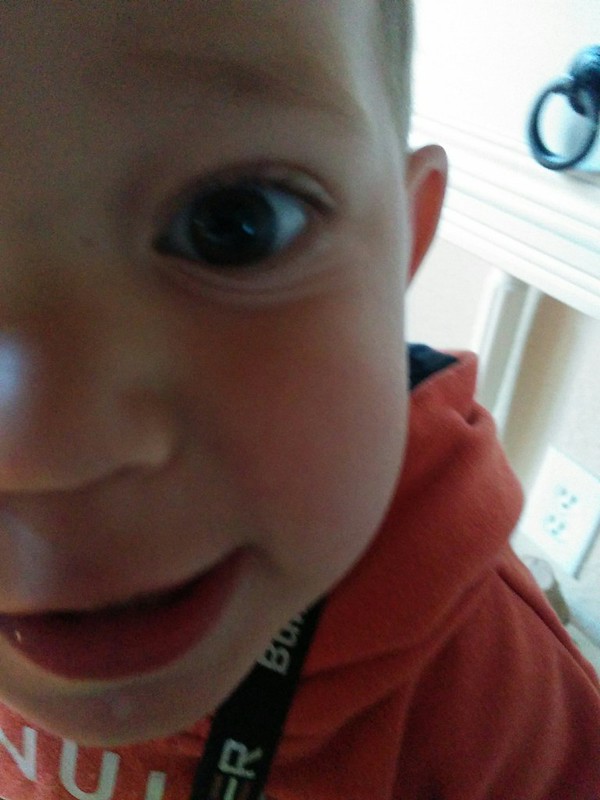 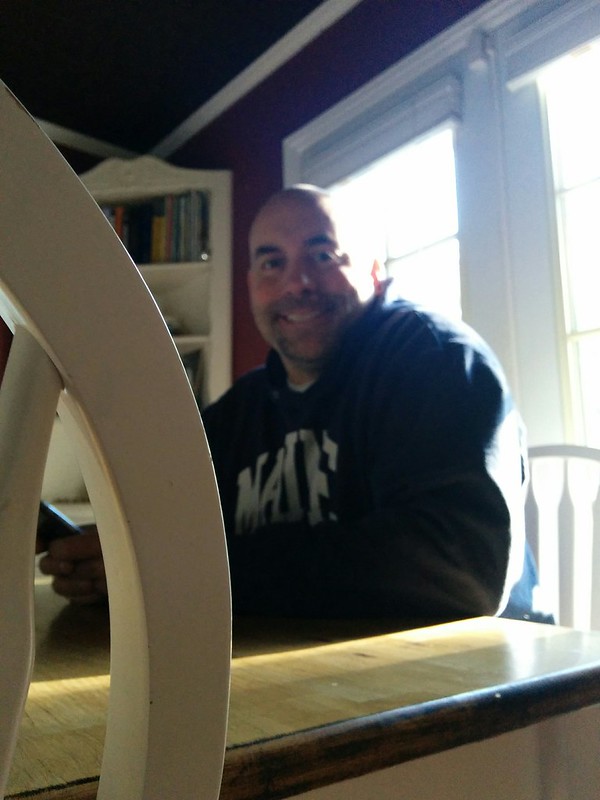 Monterey was our first stop outside of San Fran.  It was a nice hop  and we have great friends from Istanbul who live there, Tom and Ann.  We planned to meet up at the famous Fisherman’s Wharf but our lightsabers got crossed and we completely missed them.  We found free parking outside of the Monterey Tides (AWESOME lobby and hotel bar) just down the shore.  We took a taxi to the pier.  When we found out we were going to miss Tom and Ann we talked about taking off but decided to grab dinner on the pier just for the heck of it.  The cliff notes are simple: over priced and cold.  Maybe we were just having a run of bad luck so I’ll give it another shot somewhere down the road (especially if I can stay at the Tides) but it’s a cold shoulder at least to the pier, right now. 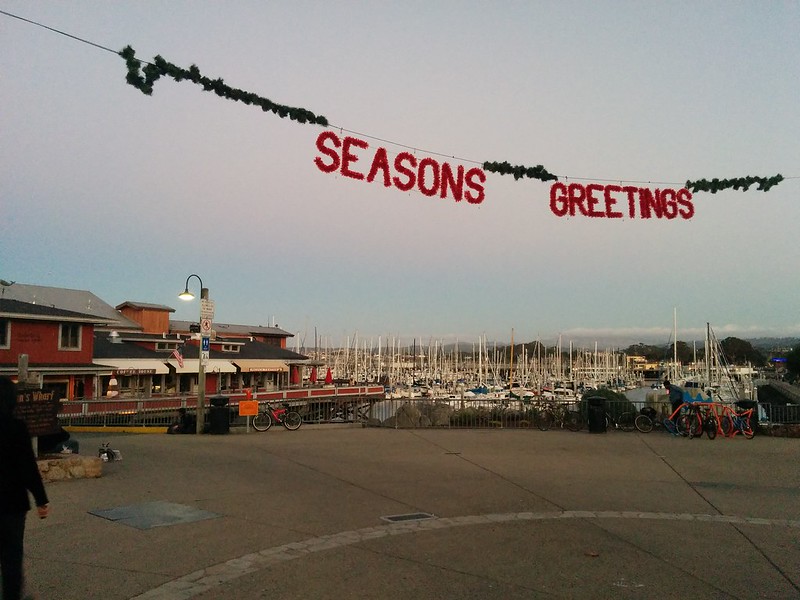 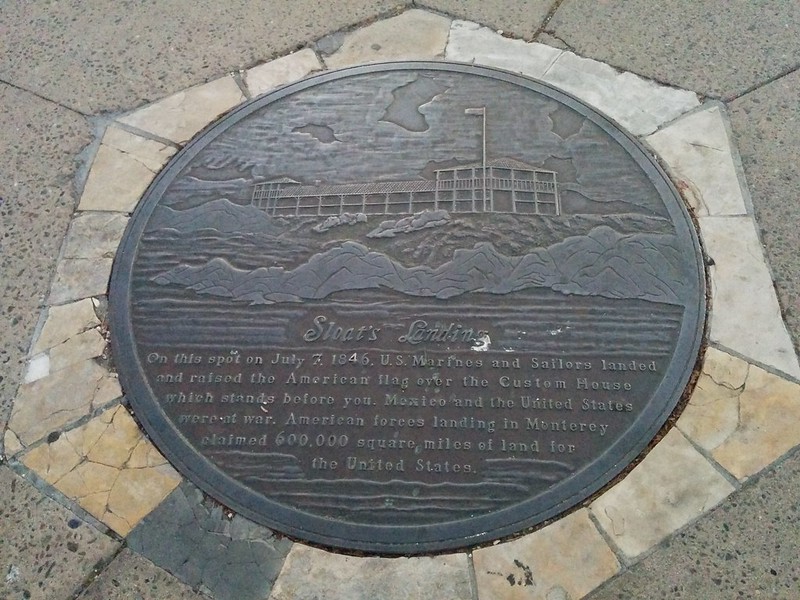 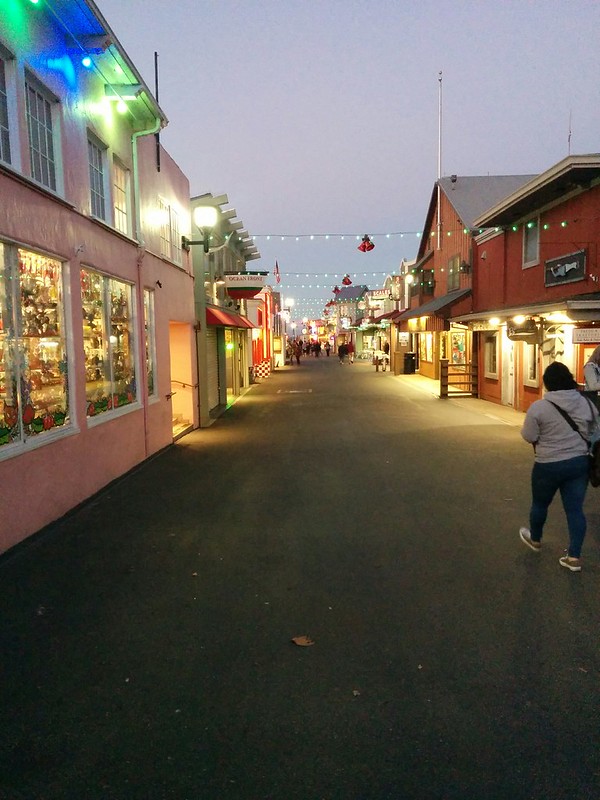 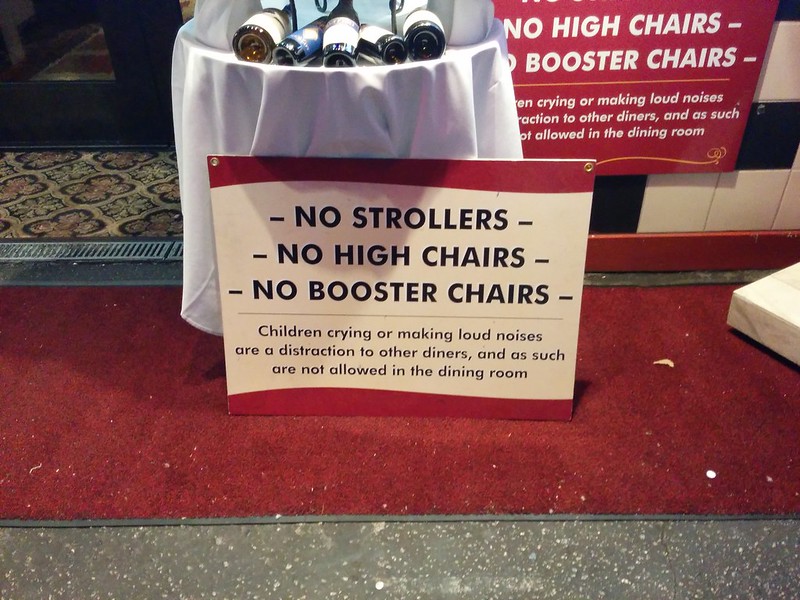 Taken at Old Fisherman’s Grotto.  Please be sure to flip them the bird when you walk past (I did 3 times). 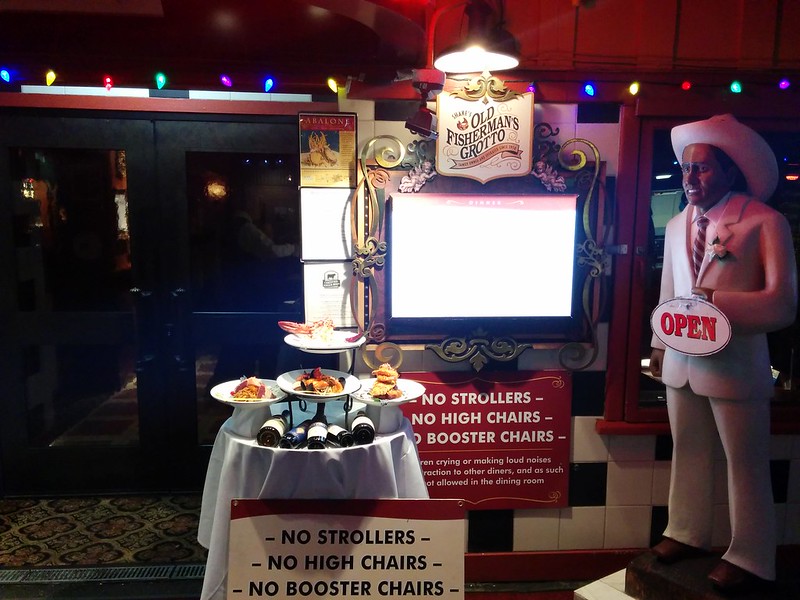 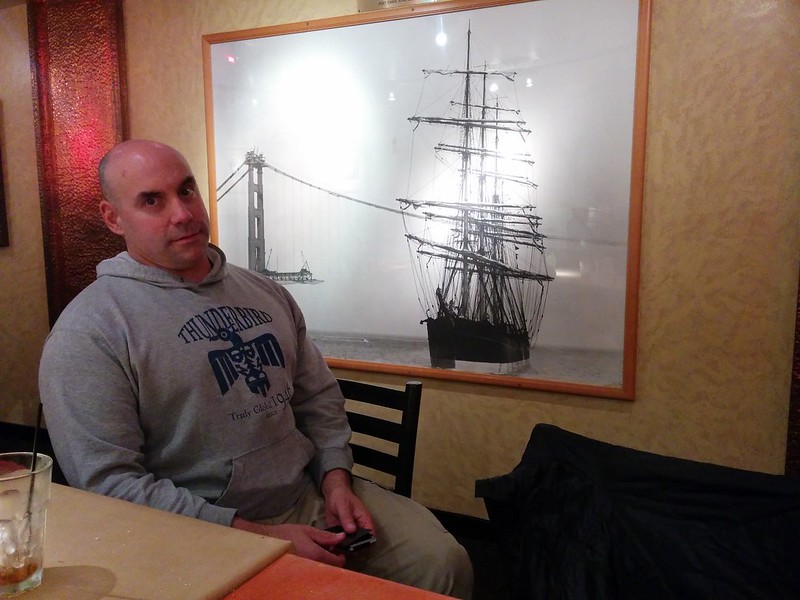 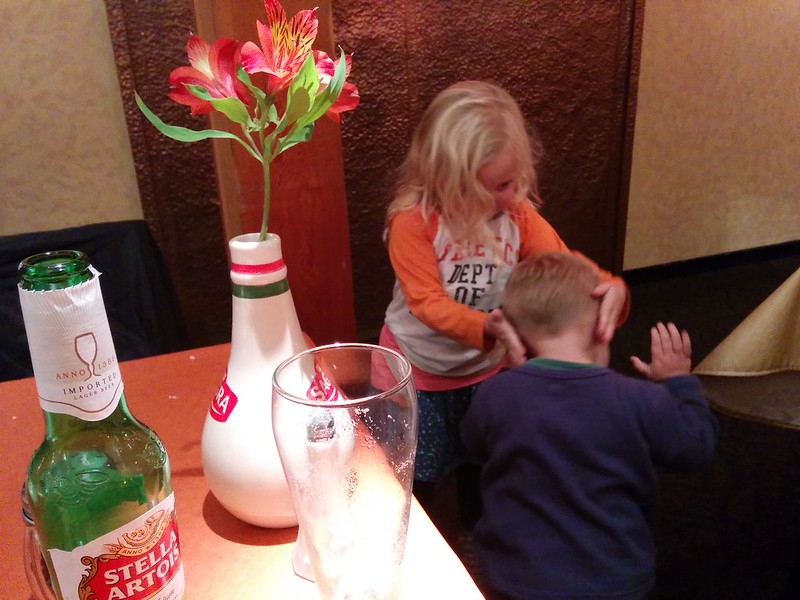 She’s always playing with his ears… always.  Taken at the pizze joint, down the road from the inexcusable signs.

We boondocked in a Safeway parking lot that night, in a town name Carmel-By-the-Sea (it’s the legit name… didn’t make it up).  I found the spot on a freecampsite.net and confirmed with customer service in Safeway that it would be ok to overnight (something that is RARE in California).  The lady said, “No problem,” but someone must have forgotten to tell the gruff man who banged loudly on our door at 6:30 the next morning. He was very…. instructive that we needed to move on.  We switched to a different spot in the lot, the kids and I did groceries while Scott worked and we left early.

I try to be balanced when I’m planning our destinations.  I pick things I know Scott will like.  I throw in plenty of parks to keep the kids well exercised and happy.  I don’t go out of my way for things of interest only to me because it’s usually not much fun (even for me).  Hearst “Castle” was no different and only reaffirmed that I need to choose things-to-see carefully.

La Cuesta Encantada (the “castle”) was… an interesting/annoying stop.  I’m using quotes for castle because I’ve been to real castles.  This mansion is gorgeous but it’s not a castle.  The tour is overpriced at $25 per person (as is everything in the gift store – $9.50 for a patch?!  I’ve never seen them more than $5).  I probably would have skipped it altogether but I’ve wanted to see the indoor pool for some time (and it forced Scott to drive on Pacific Coast Highway for 3 hours! Yay!).  This is going to sound completely wacky and, let’s be honest, I can go down the rabbit hole with the best of them (…prove it?  My grandfather performed bare handed psychic surgery on people).  I remember having a dream when I was young about a big indoor pool.  I’m not going to go into all the boring details, but it’s weird that I remember the dream and the dream was eerily similar to the recessed part of the indoor pool.  I remember the first time I saw a picture of the indoor pool – my skin goose bumped and I got the chills.  I wanted to see it in person.  Unfortunately, before getting to the last stop on the tour, the guides were so overbearing and irritating I couldn’t concentrate on anything but finding the bus to get the hell out of dodge.  My fault probably – bringing 2 kids who had been cooped up carseats to a place where you literally can’t touch anything…. not even the FLOOR {even though it’s made out of travertine which is the same damn material they used in Rome which is still standing 3000 years later}… was a bad idea.  Don’t even get me started… 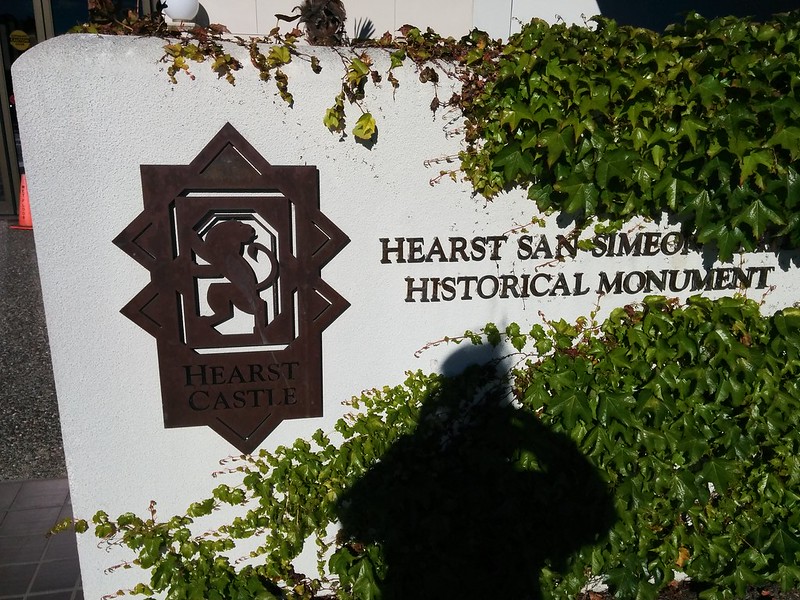 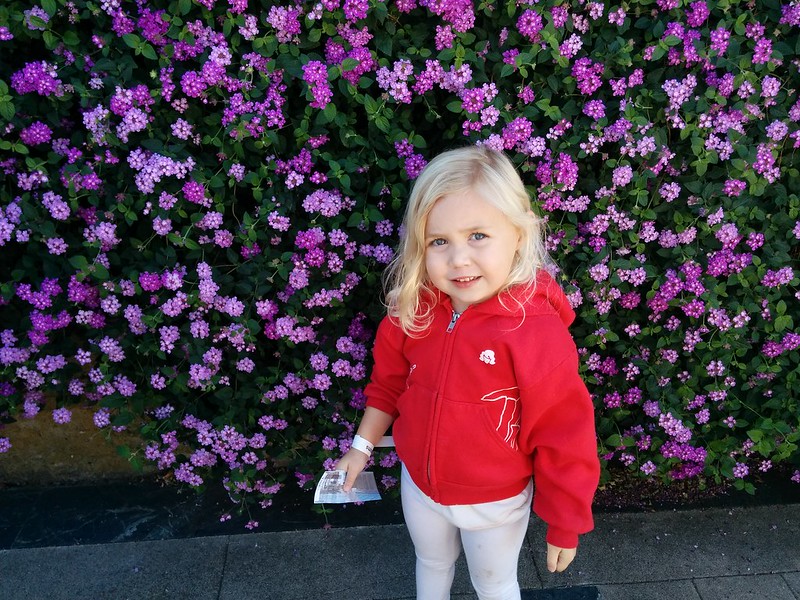 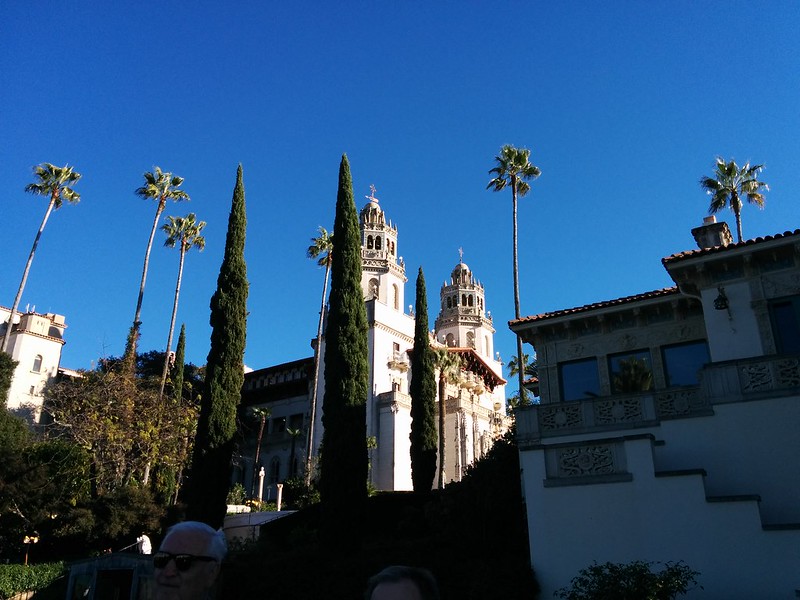 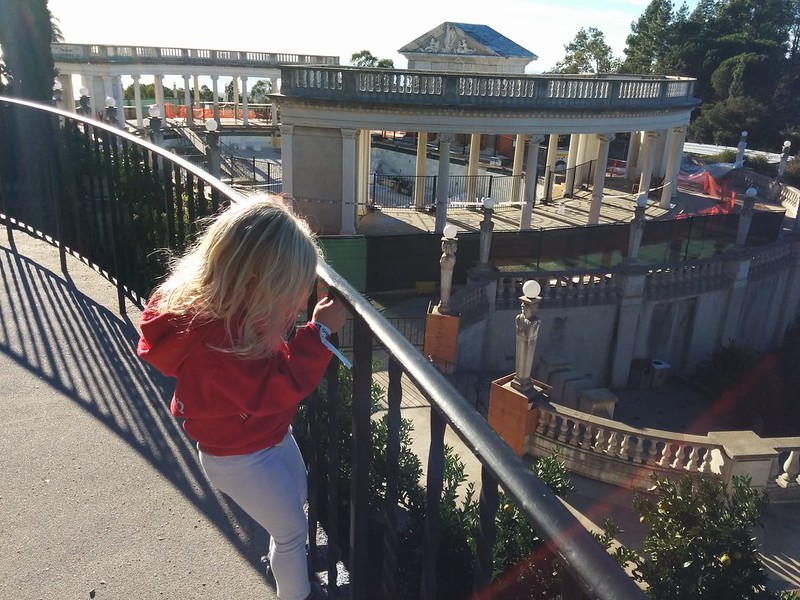 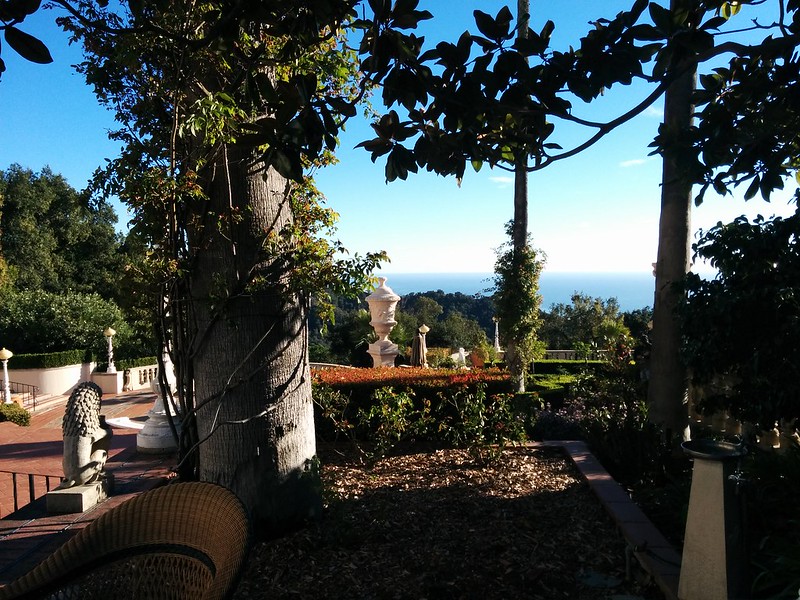 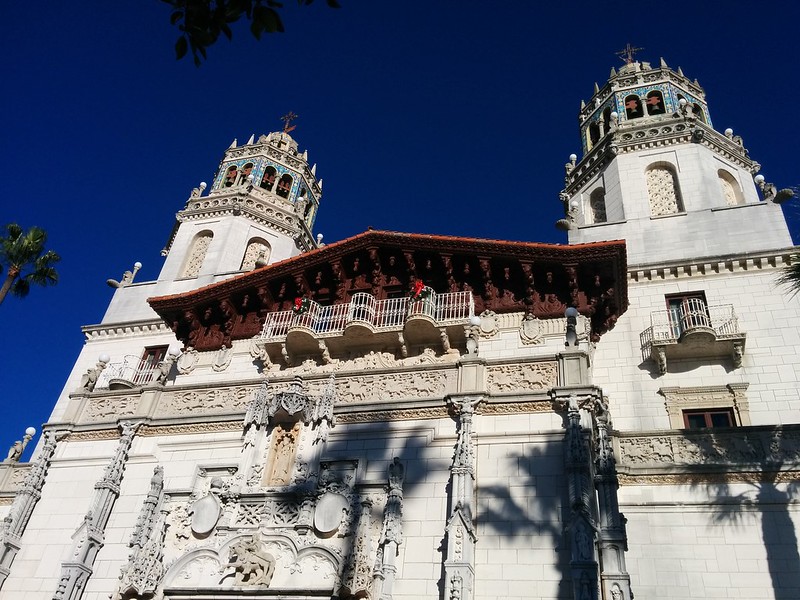 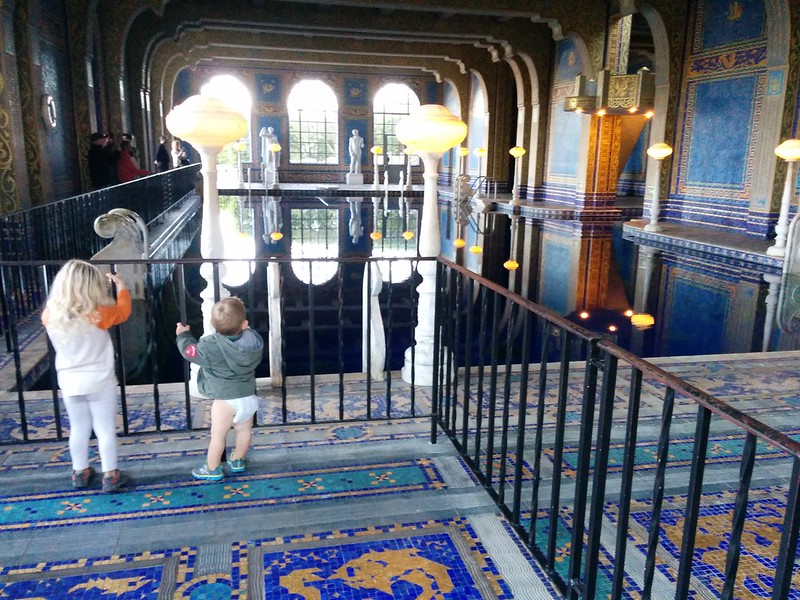 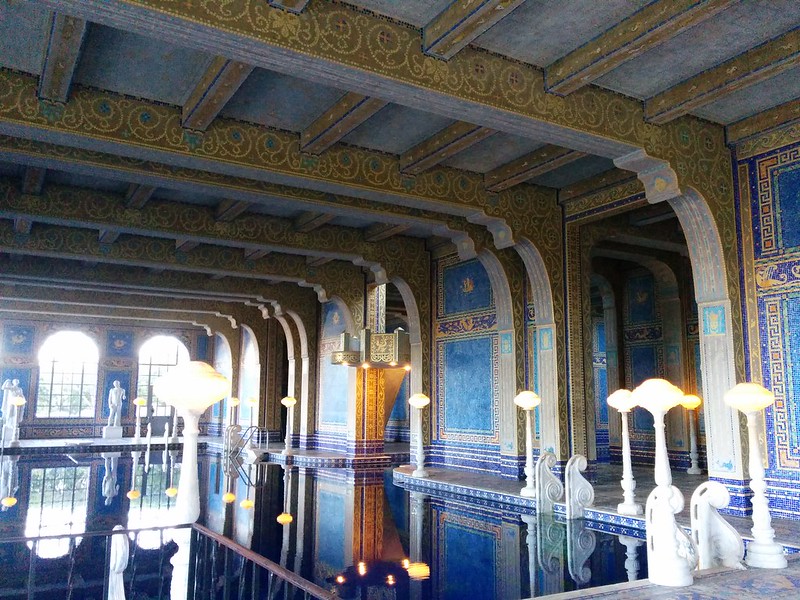 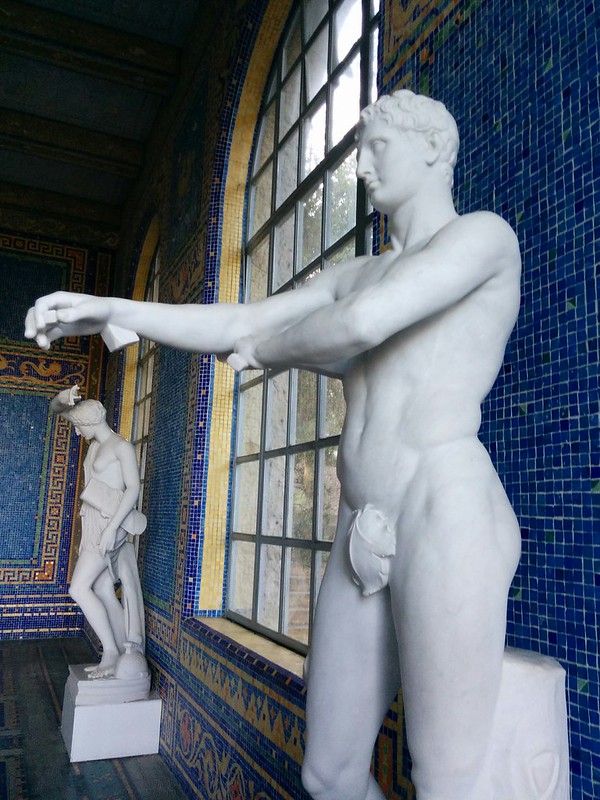 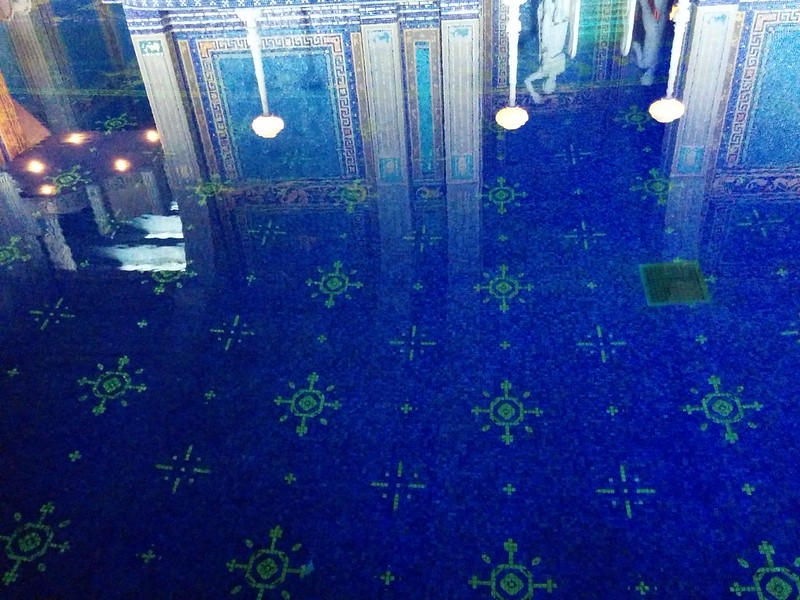 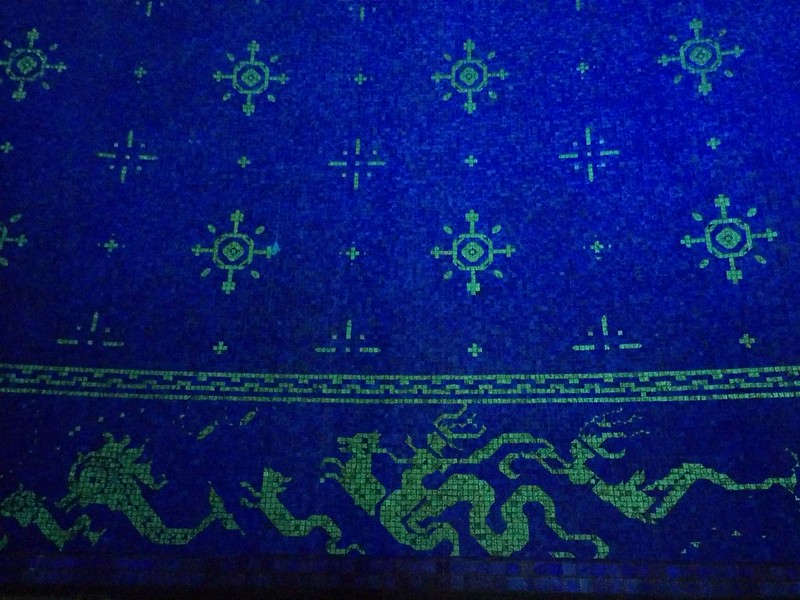 Beautiful place.  Skip it if you have kids.  I’d only go back for a chance to swim in the indoor pool.

After spending a couple of weeks here, California is an outlier for me.  I think it might be the the magnetic opposite of Utah.  In Utah, you are hard pressed to find a bottle of beer (and what you can find is weak).  In California, the grocery stores imbed wine with almost every other food group (including condiments).  There was more wine than food.  In Utah, most things are a reasonably priced.  Our weekly grocery bill averaged about $150.  In California (where food is actually grown) I got out of the grocery store with what I thought were some snacks and lunches and 4 chicken breasts… no alcohol and no dinners… $130.  I want to buy organic as much as the next person but for double or triple the cost?  I can’t afford it. Ditto on gas – we bought fuel en route to LA (about an hour outside the city).  It was $3.99/gallon for the CHEAP stuff.  Whoa.

California is also, by far, the least ‘nice’ state that we’ve encountered.  That’s my polite way of saying we’ve encountered enough assholes to recognize a trend – it’s not just a few randoms.

The list is getting rather long now, isn’t it?  This is not like this in other places.  If you’re from California, don’t think this is normal.

For all it’s faults though, I still love the place.  The Pacific Coast is wild in a way that the Atlantic isn’t.  I love the mountains.  I love the big skies and sunsets over the sea and misty giant tree groves.  It feels more healthy here.  We even found a fruit stand selling avocados, 5 for a $1.  Now you’re talking!  Just… people… stop being stressed out weirdos, please.

We’re arriving in LA to spend a few days with close friends before heading out of the state.  Looking forward to seeing that the city of dreams has to offer.

Today was one of those serendipity days.  I love it when that happens. One thing leads to another and it all just falls into place... you jump in the flow and go. We decided to stay a third night in...

Four Out of Five