I’m procrastinating at this point.  Not cool.  We had so much fun in Sedona and I took so many pictures…  The post feels like…. something I’ll get to tomorrow.  Except, tomorrow was 3 days ago already.  Unsatisfactory.

The kids refuse to wear shoes.  They always have, I suspect they always will. It drove people absolutely batty in Colombia.  Our Latin brothers and sisters are terrified of cold feet.  No idea why.  As for me, I don’t care either way as long as it doesn’t impact what we’re doing.  For example, shoes are required in restaurants because it’s the restaurant law – ditto for stores.  I believe in natural consequences – the fact that their feet should be cold ought to make them want to wear shoes.  This logic is 100% flawed, by the way.  It’s bitten me more times than I care to recount but we’re committed to the path at this point.

Subsequently, being that we’re in the desert, the kids get pickies (little bits of cactus or thorns) in their feet almost every day.  It is no longer a surprise but it still hurts.  I remind them about the dreaded pickies each morning and several times throughout the day.  Instead of making the normal choice to cover their feet to avoid this problem (they each have several pairs of shoes), they’ve become good at using tweezers to pluck out the pickies.  Who am I am to stand in the way of bona fide problem solving?! 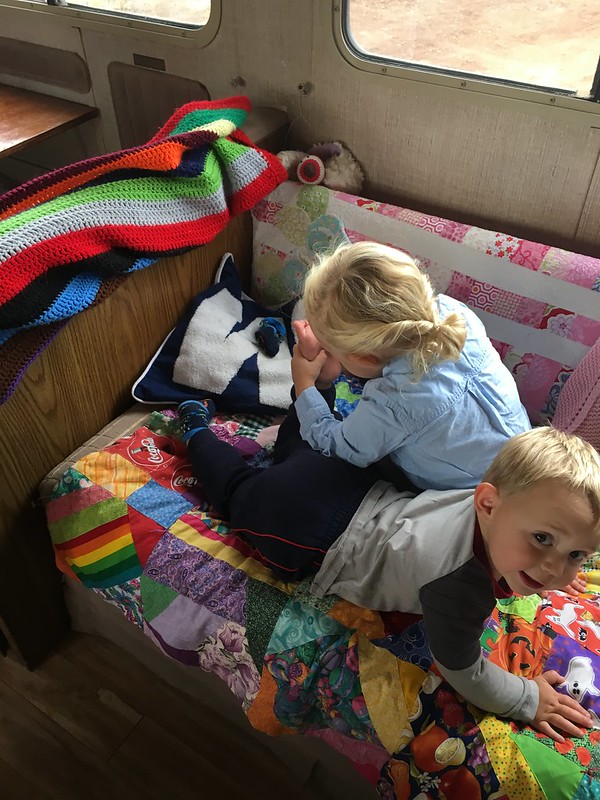 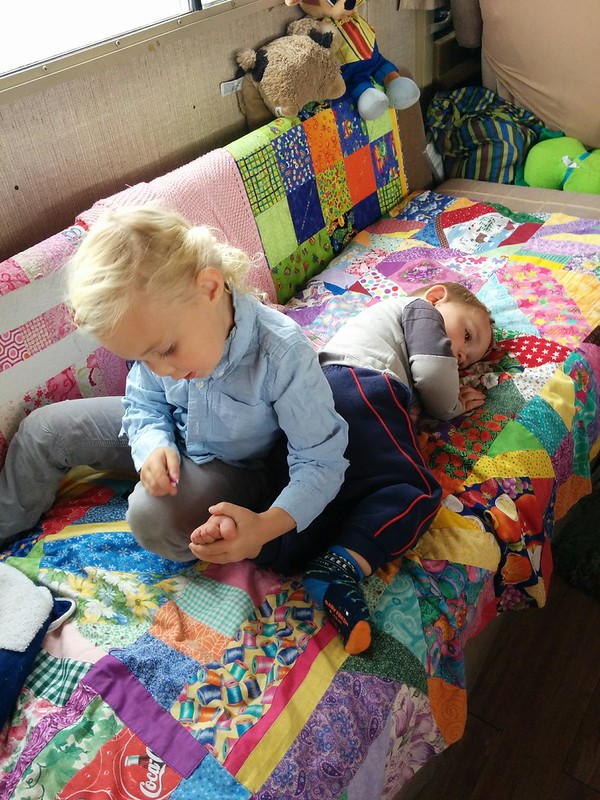 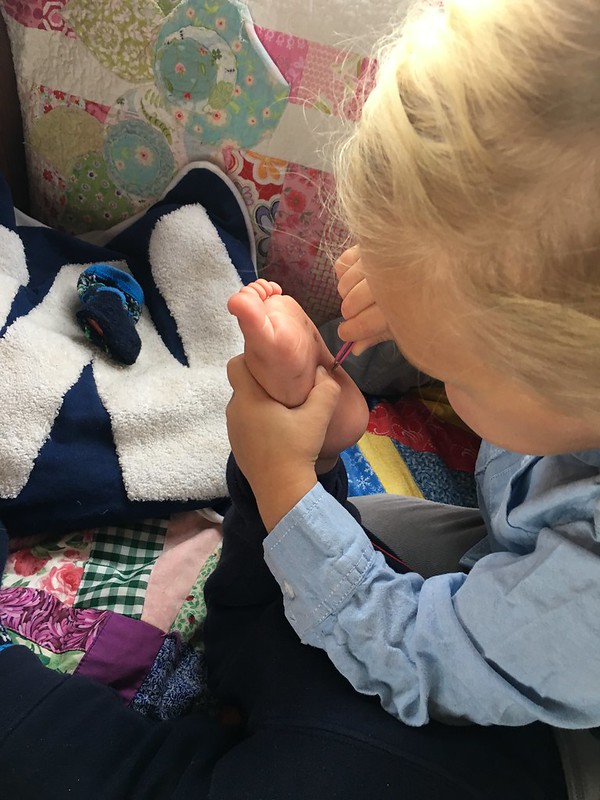 The day after we went to Bell Rock, we hit the Airport Vortex.  I can’t call it a ‘trai’l with a straight face.  It’s a rock scramble to the top of a decent knoll.  The knoll doesn’t look that impressive in the pictures, but she’s got some height (especially when you’re responsible for 2 miniature ninjas who don’t show proper respect for the edge).  The view is, like all of Sedona, inspired.

At the vortex, I couldn’t make this up if I tried, there was a man playing a bowl. Yup – a bowl.  I don’t know how to explain it…  He had a large glass or crystal bowl and he was using a leather covered stick to rub around the edge of the lip.  It made a haunting sort of ring – very distinct.  I liked it.  It sounded like the place felt.  I’m not sure how a place can look and feel like a sound, but it did.  There was also another pair of hikers – 2 women.  One of them was vocal about not liking it all… she claimed to be “noise sensitive” (and not in the sensitive/medium/talking to the other-side kinda way…. just a vanilla ‘I”m a giant ass’ kinda way).  I heard her but I’m hoping that Bowl Man did not as he seemed very deep in his meditation. 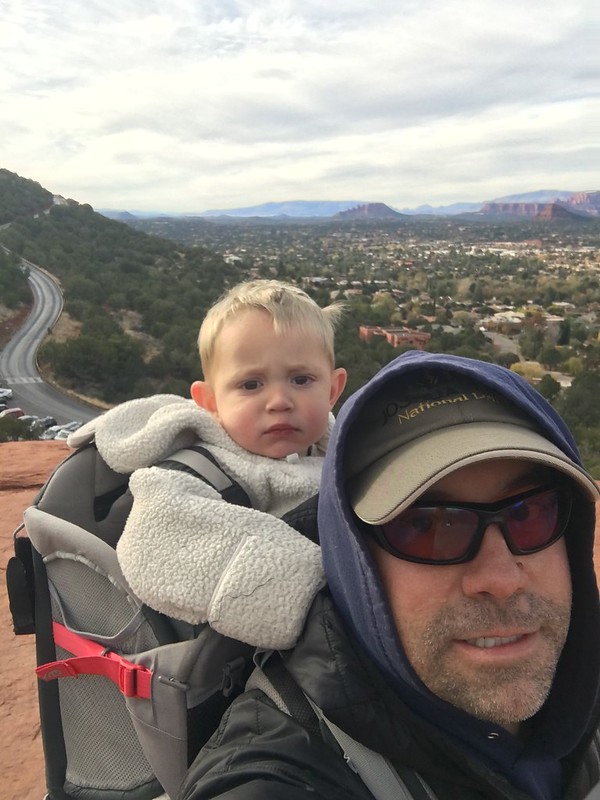 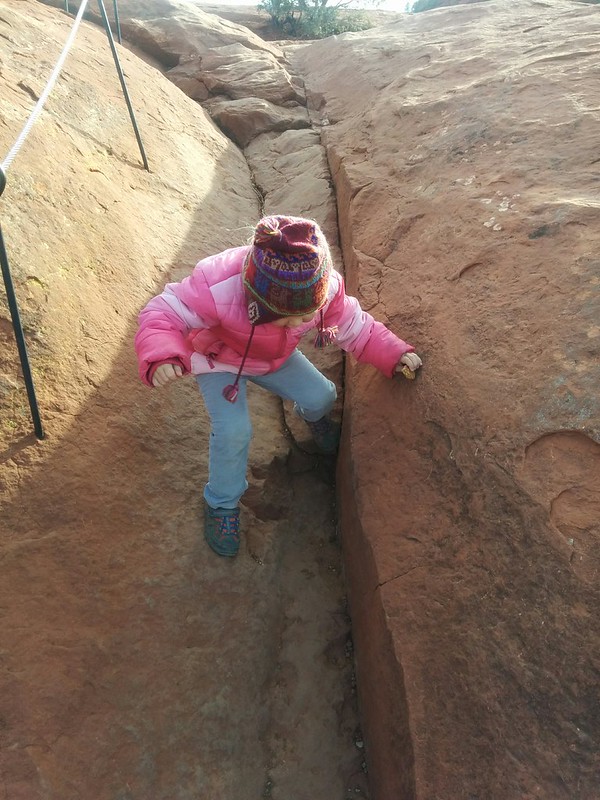 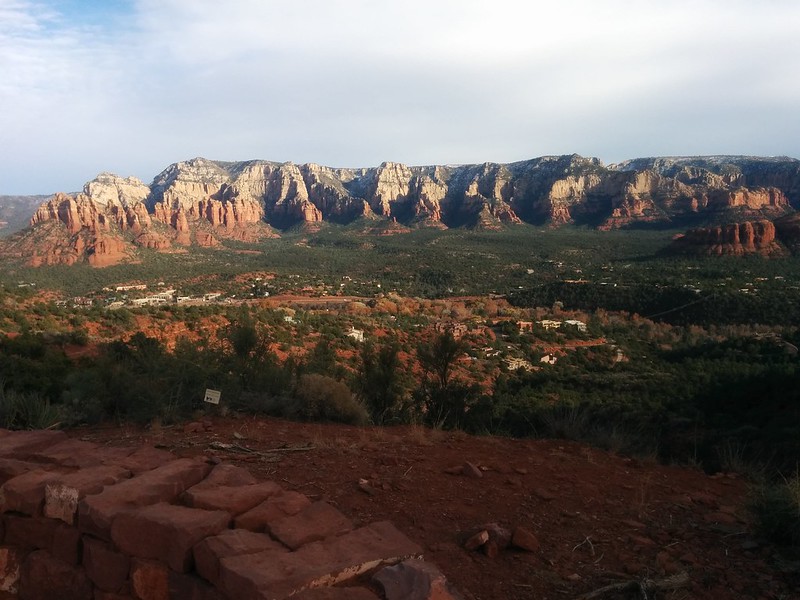 Next we drove up to the Chapel of the Holy Cross… another Frank Lloyd Wright building (the dude was nothing if not prolific).  It’s a beautiful church inspired by the creativity of a sculptor who wanted the cross to be an integral part of the structure.  It was completed in the 30s and it’s still a highlight of the city (according to most people and Trip Advisor).  Here’s the view from the chapel: 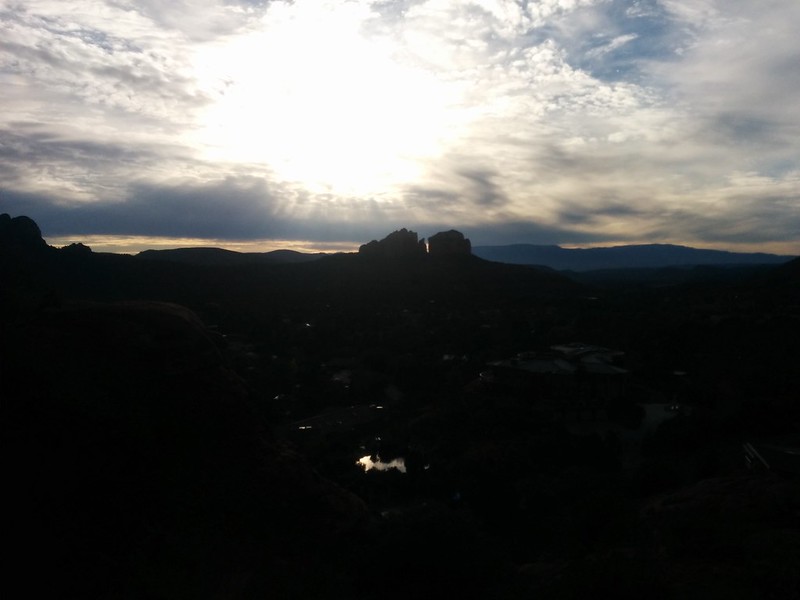 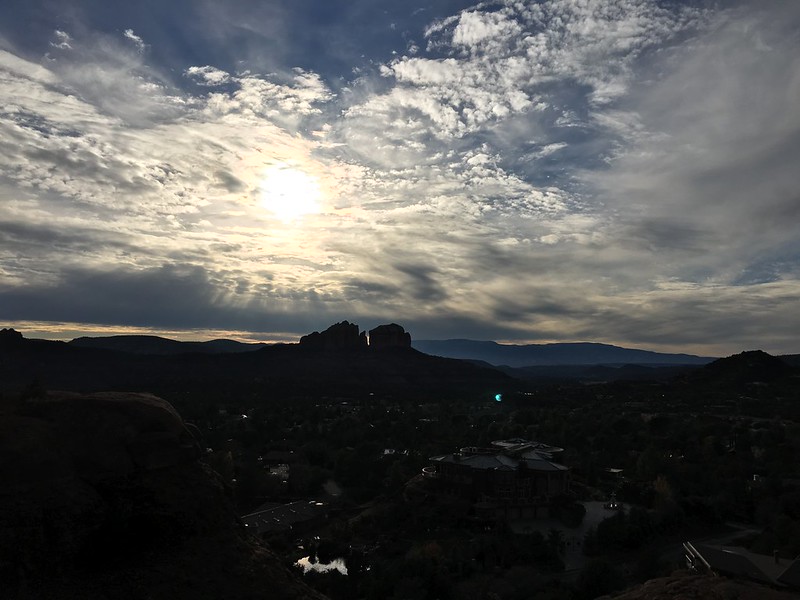 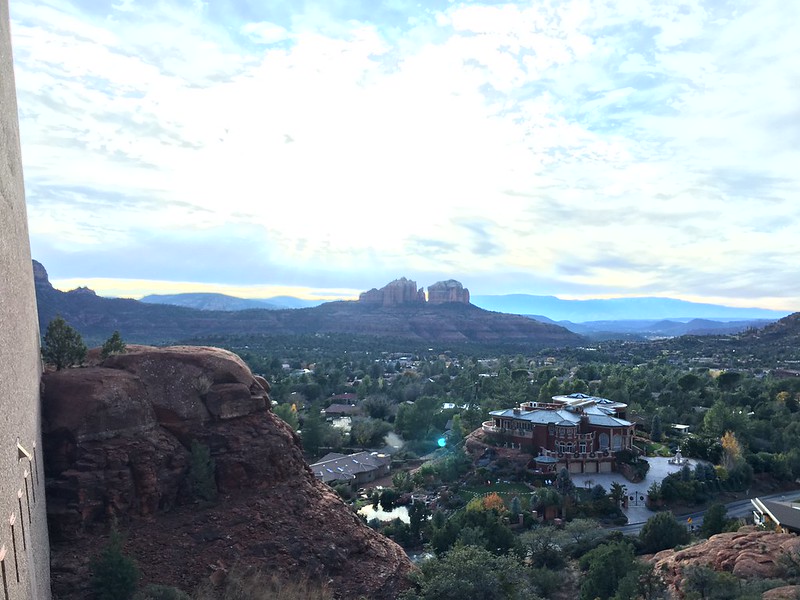 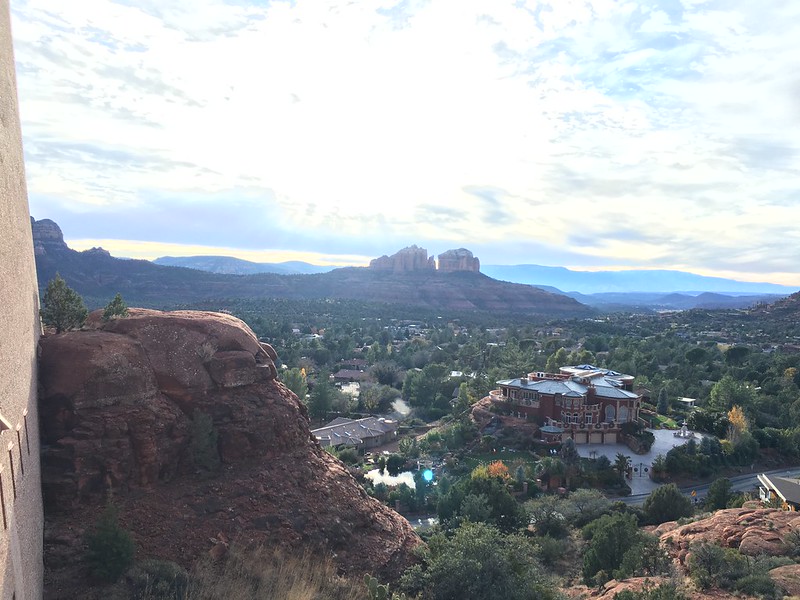 Ohhhhhh… the blue orb, right?  It wasn’t in the first picture, then it was… then it moved around.  I know I know…. hot pixel…. shooting into the sun.  The only weird thing is that orbs are kind of a “thing” in Sedona.  Google Sedona AZ orbs.  They held a whole conference on them in 2007.   I think it could be attributed to slight angle shifts.  But, you know, I shoot into the sun all the time and this is my first orb.  Isn’t that funny?!

More about the chapel.  It was crafted from clay by Marguerite Brunswig Staude.    She was inspired by the then-new Empire State Building.  After she captured FLW’s attention, they planned to build it in Hungary, but WWII broke out and plans were scrapped.  She searched the U.S. for an appropriate place and settled on the buttes of Sedona.  It’s a Roman Catholic church and it’s absolutely breathtaking.  It’s also quite small and intimate. 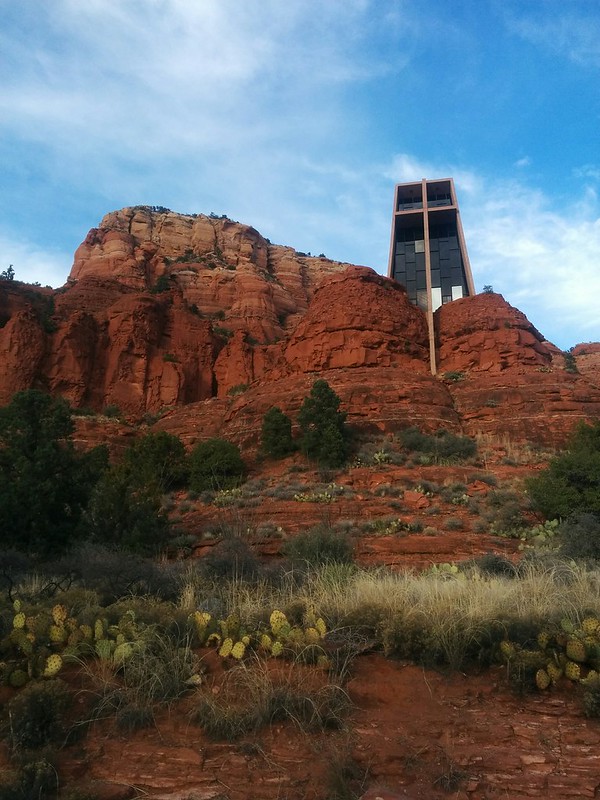 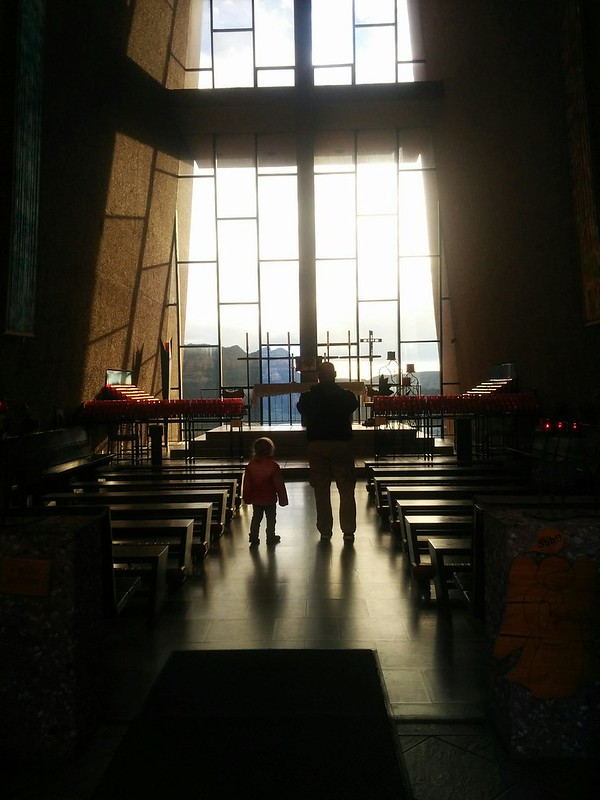 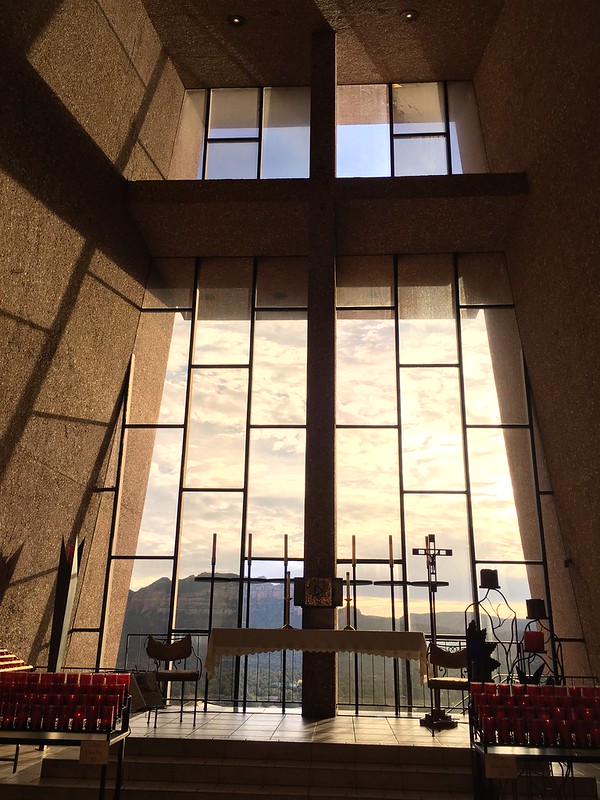 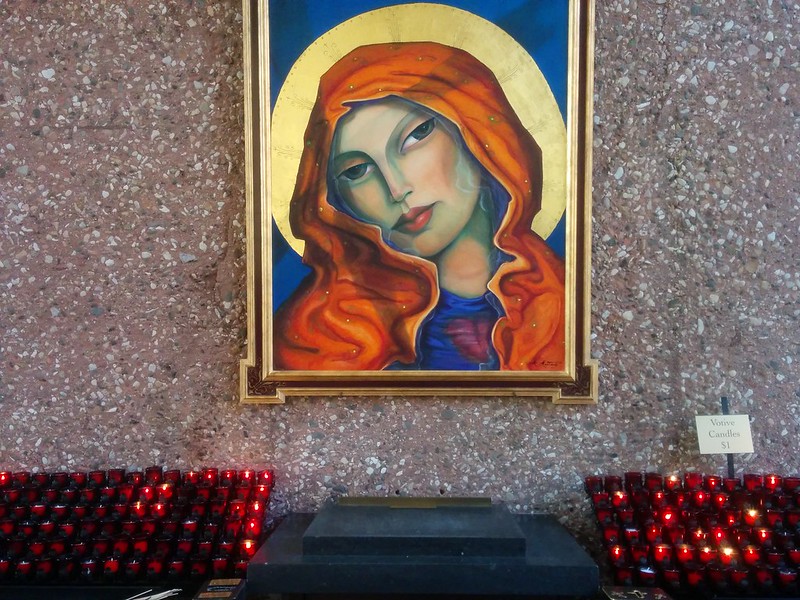 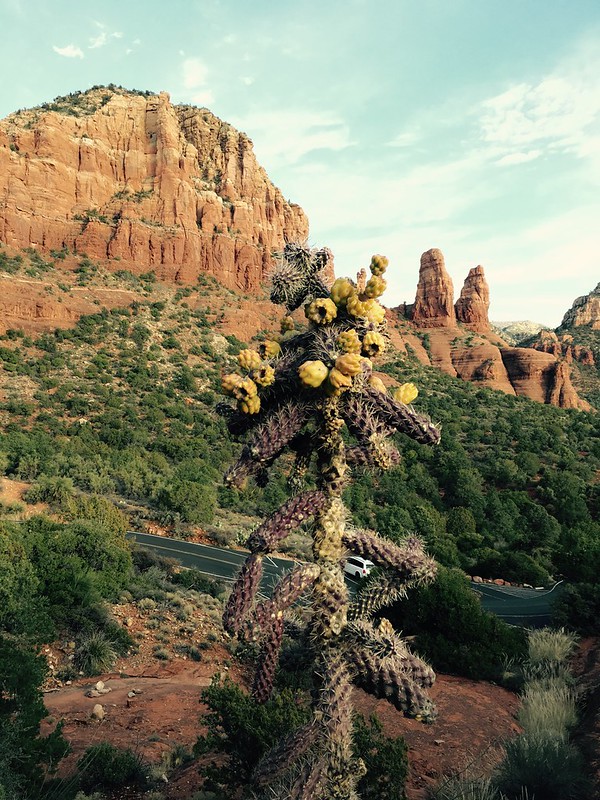 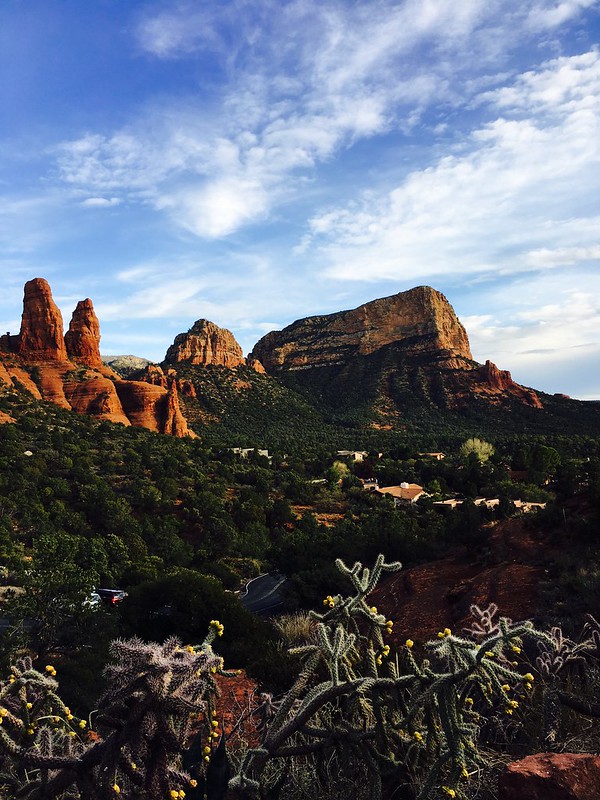 We burned rubber out of Quartzsite.  Kidding.  Just kidding.  The tires are too good right now to do something so mean to them. I wasn’t blow away by Joshua Tree the last time, so I hadn’t planned to spend time...

Bonneville, UT.  Ring any bells?  When Scott first mentioned the town, I thought he was referring to an old grandma car (and even that was a stretch because I don't pay attention to cars).  Turns out, I wasn't completely off...

While listening to Bill play live piano music in an old world lounge in the Bluenose Inn in Bar Harbor on a cliff overlooking the Atlantic, I have certain expectations for how the kids will comport themselves.  I'm normally very...