When it’s cloudy I optimistically assume it’s going to be a little warmer.  I think of the clouds as nice fluffy earth blankets.  That wasn’t the case in Sedona.  It got progressively colder as the week went on (and we started with snow, so… that’s not good).  The clouds were actually a cold front… a mean, ugly blast from up north.  Screw you, winter.  We’re in the southwest…. we ought to be seeing temperatures in the 70s (so we can laugh at everyone above the 40th parallel).

This is the third and final post on Sedona (at least for this visit).  Good riddance (to the post, not the place).  I’m officially done procrastinating.

The day after visiting the vortex, I dragged Scott and the kids to the Boynton Canyon energy vortex.  Look… I’m not a vortex hunter.  There’s a website for those folks.  In this case, however, the short hikes to fairly unique “attractions” were a perfect fit for 2 little wanders and 2 adults with only a half a day set aside for adventuring.

As this is also the third post referencing the energy, surely it’s an exhausted topic…. so I’ll be brief.  It is said that there are 2 kinds of vortexes, sometimes described as masculine/feminine or yin/yang or electric/magnetic.  The best explanation I’ve heard of them so far is outward looking and inward looking.  The vortexes with great vistas encourage you to look outward from yourself.  They help you recognize that your problems are small in the grand scheme of things.  You are part of a larger whole.  The inward looking vortexes are in canyons.  You are shut off from the rest of the world which helps you focus on what’s happening within.  Inward looking is where healing takes place.  Our day 3, Boynton, is said to have both kinds.  It’s a place where there is harmony.

I heard a couple arguing the parking lot post hike so I’m not convinced… she essentially told that poor guy to take a long walk off a short pier and I think he might have agreed with her.

The vortex location is on a butte that overlooks a box canyon and the view is… as usual…. special.  However, it has to be said that the Enchanted Hotel does, kind of, kill the whole nature vibe a little.  No hotel seems to pay enough attention to their roof, ever notice that?!  (I bet it’s a fantastic place to stay, though.  It’s on our list for our next visit. )

Sitting on top of the butte at the vortex was a man playing a flute (no… different dude than the day before…otherwise I would have been creeped out).  Because of the landscape you could literally hear him playing from over a mile away.  Isn’t that crazy?!  I don’t know much about flutes but I don’t think they’re known for their sound carrying.  We met him on his way down. His name was Robert and he gave each of us a heart-shaped stone. He said they are infused with the energy at the vortex.  He didn’t ask for anything and he didn’t offer anything.  He was jaunty like a leprechaun (although much too tall to actually be one). 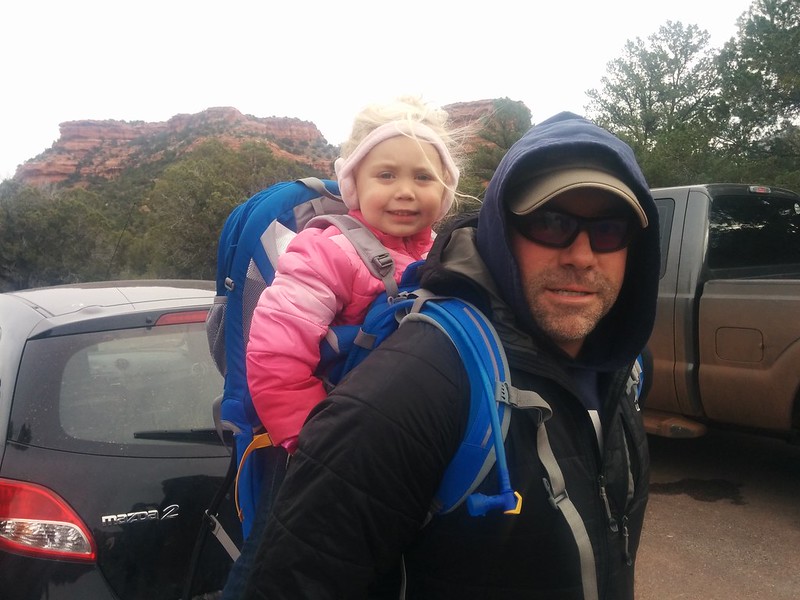 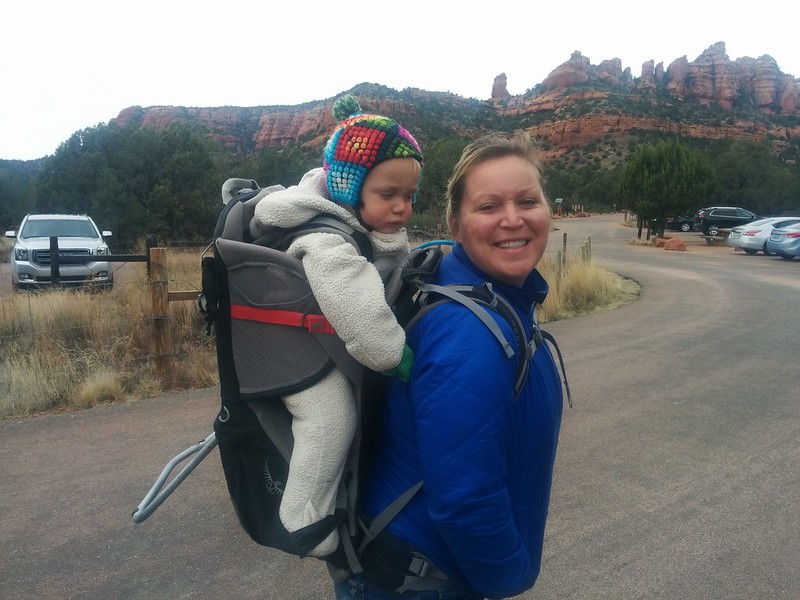 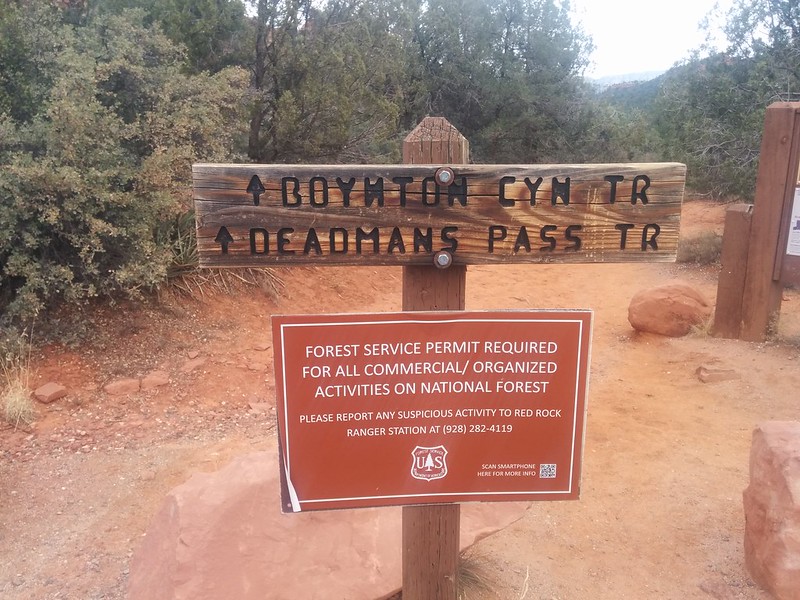 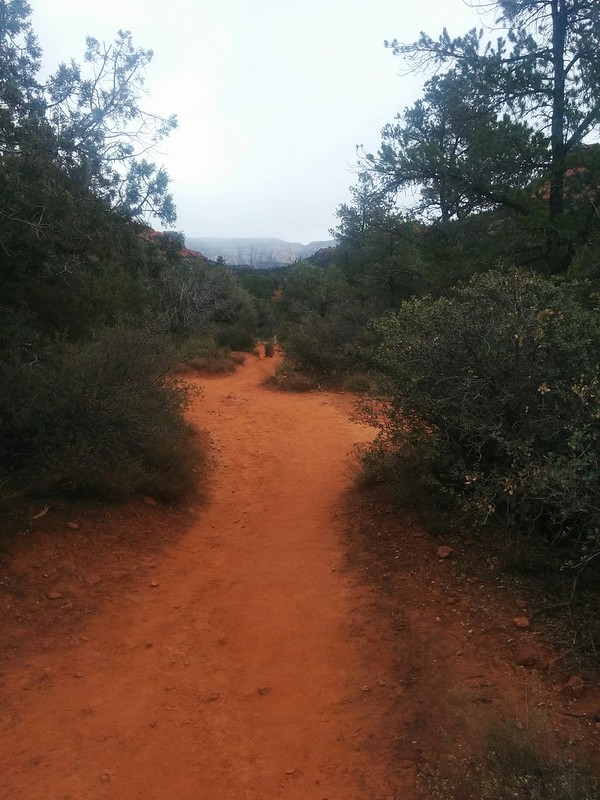 We didn’t change the color in this photo… that was the legit color of the ground. 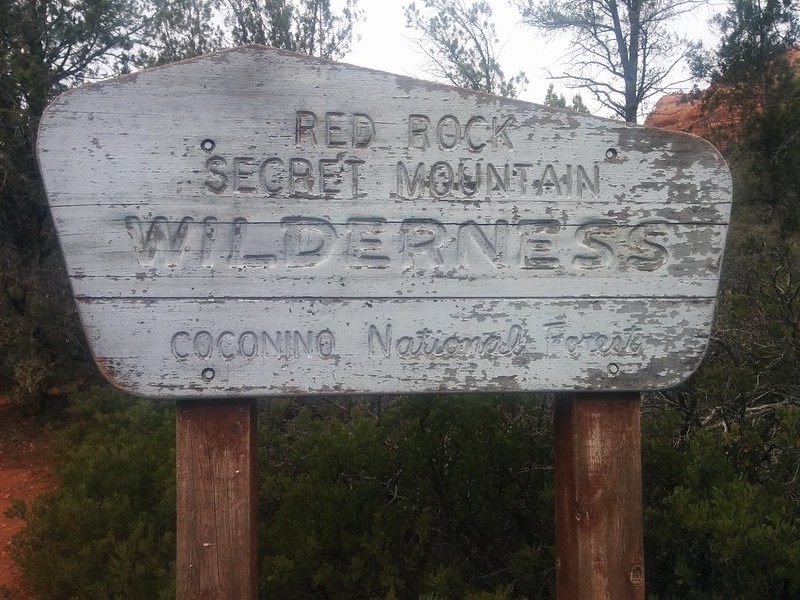 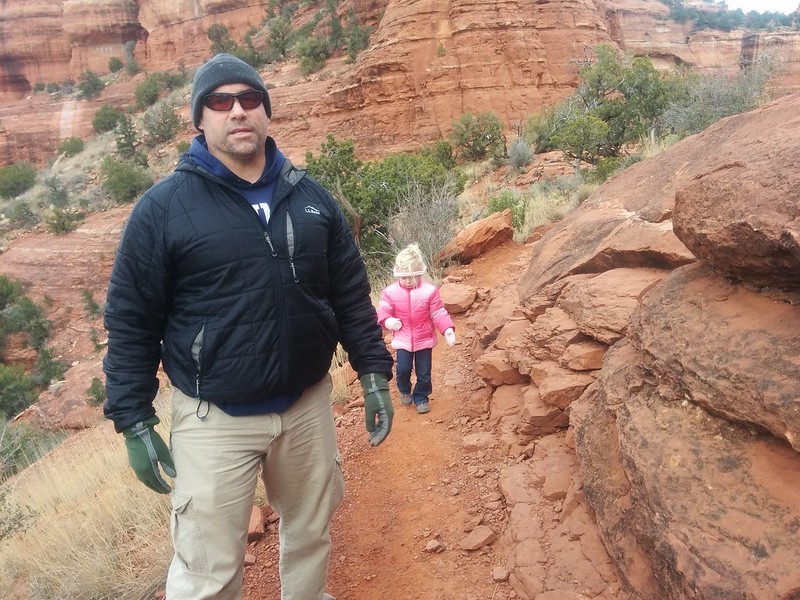 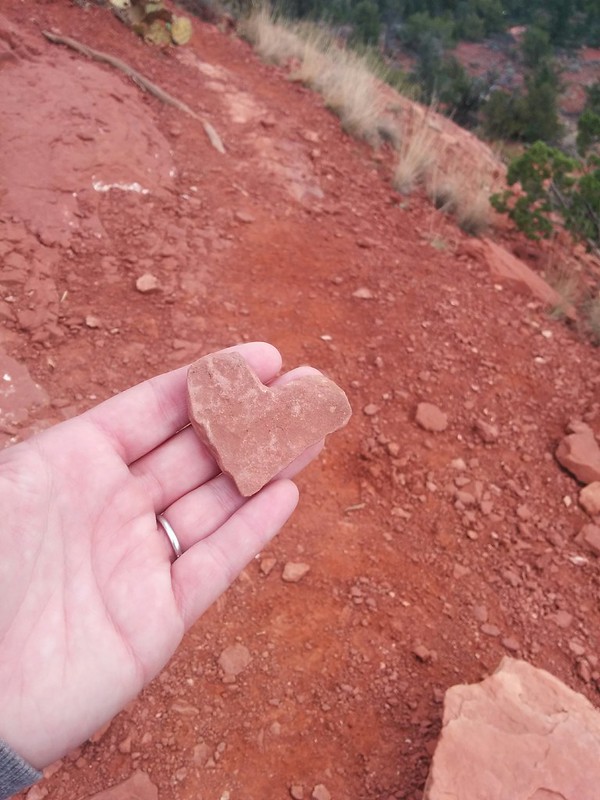 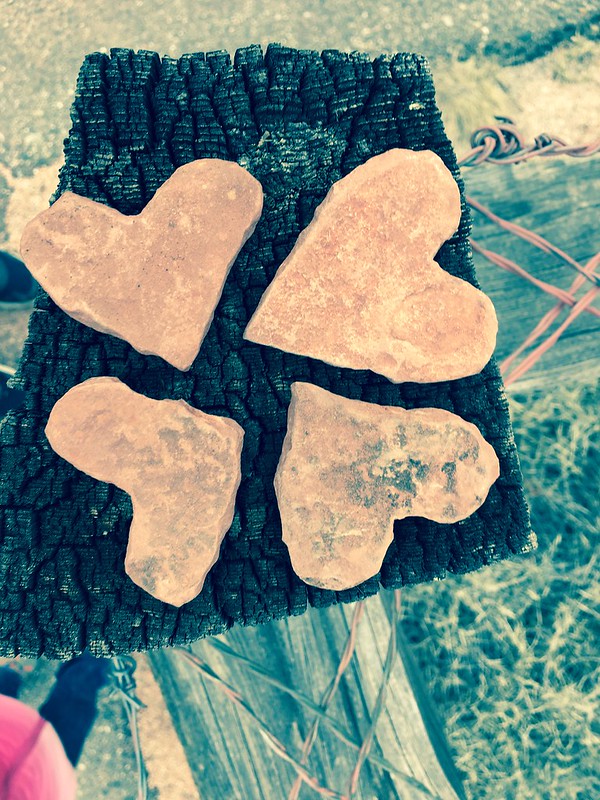 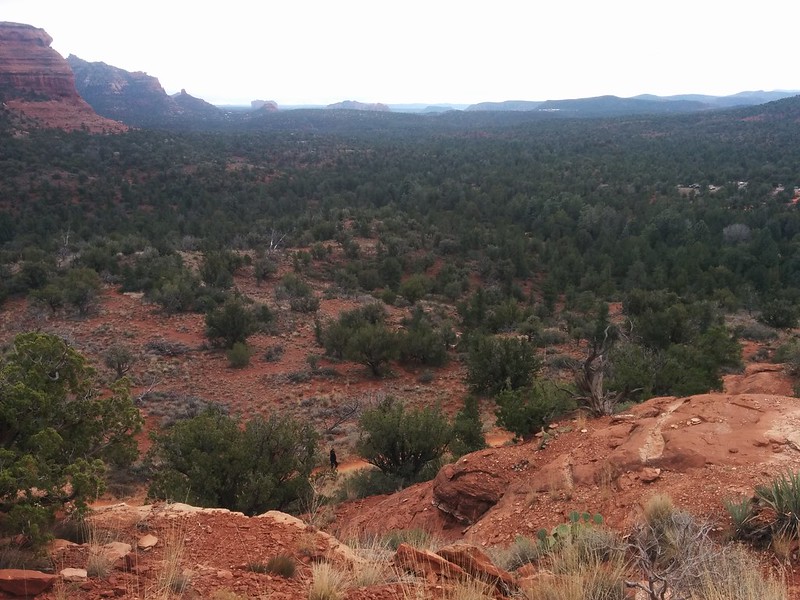 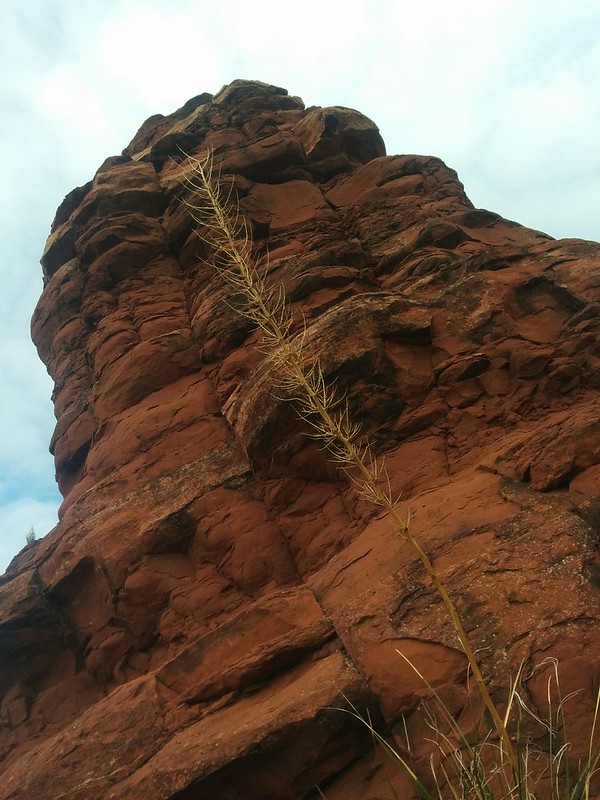 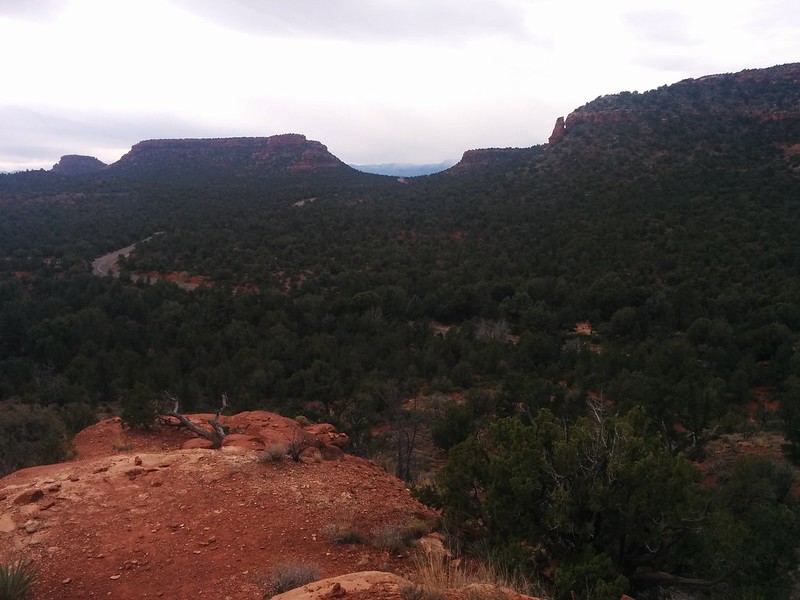 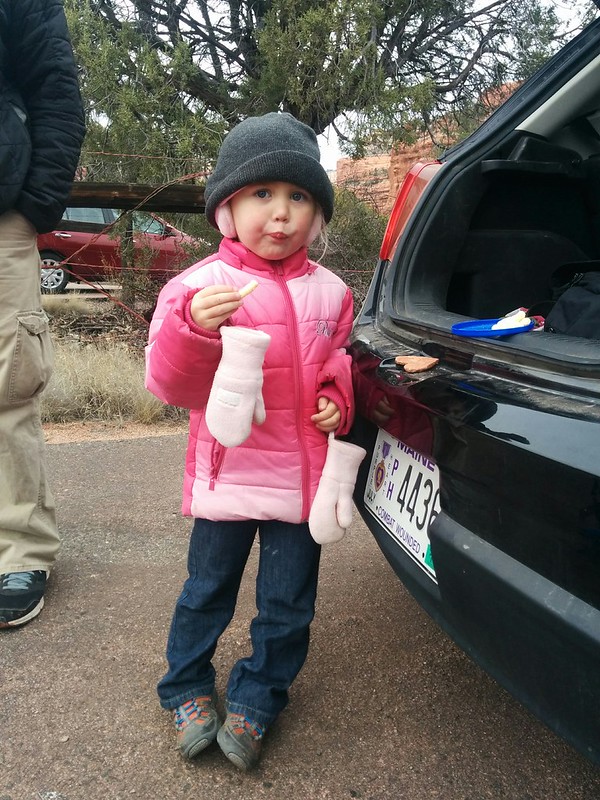 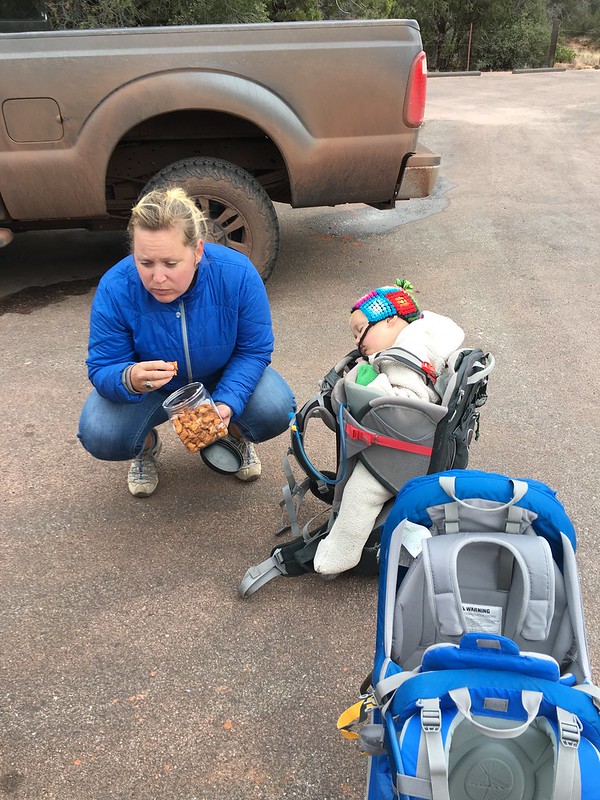 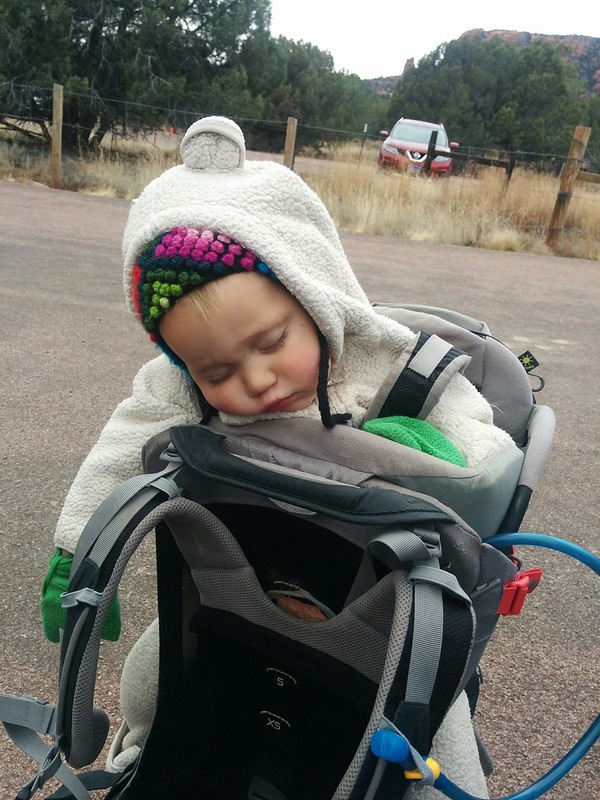 Denise – this last part is for you.  I mentioned that the Juniper trees change in the energy vortexes (which is an easy way to know you’ve arrived).  The first picture is of a normal tree – found all over the place in Sedona.  The pictures after that are all taken at vortex sites.  They’re all twisty.  Whatever makes the tree grow like that, it’s really interesting to look at them. 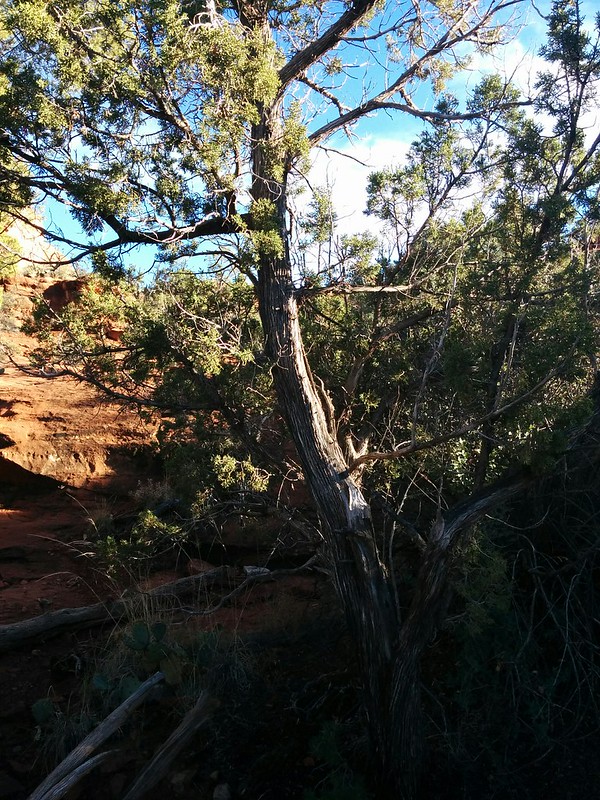 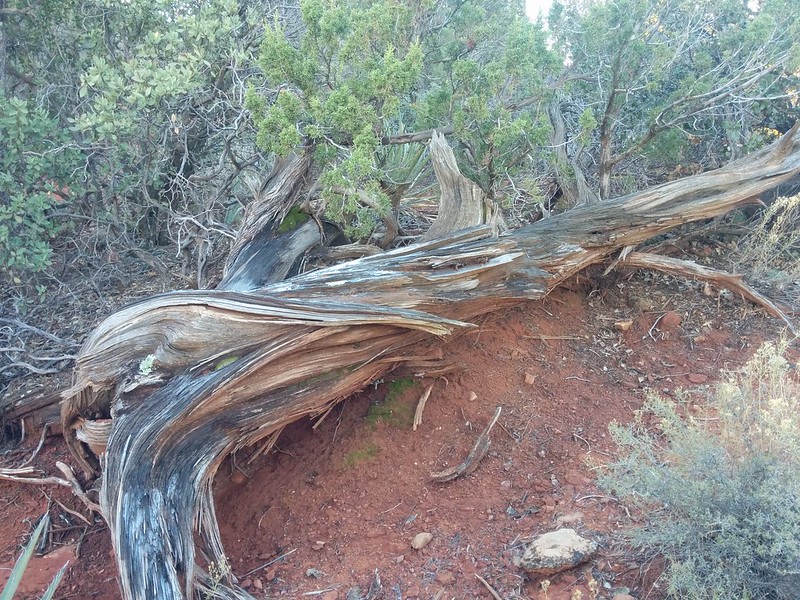 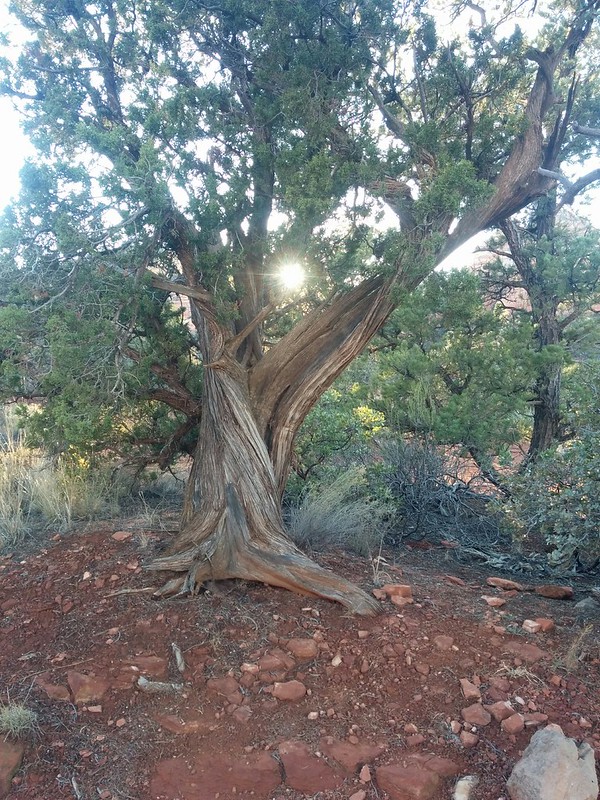 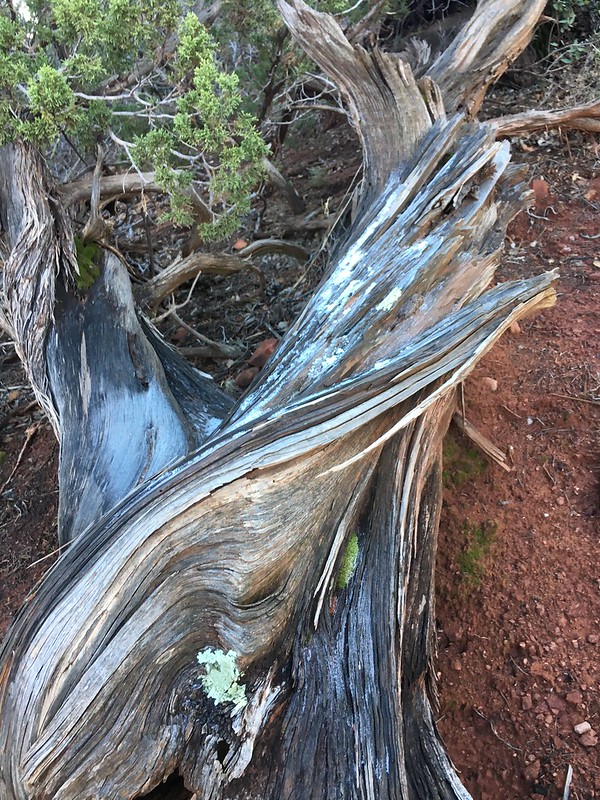 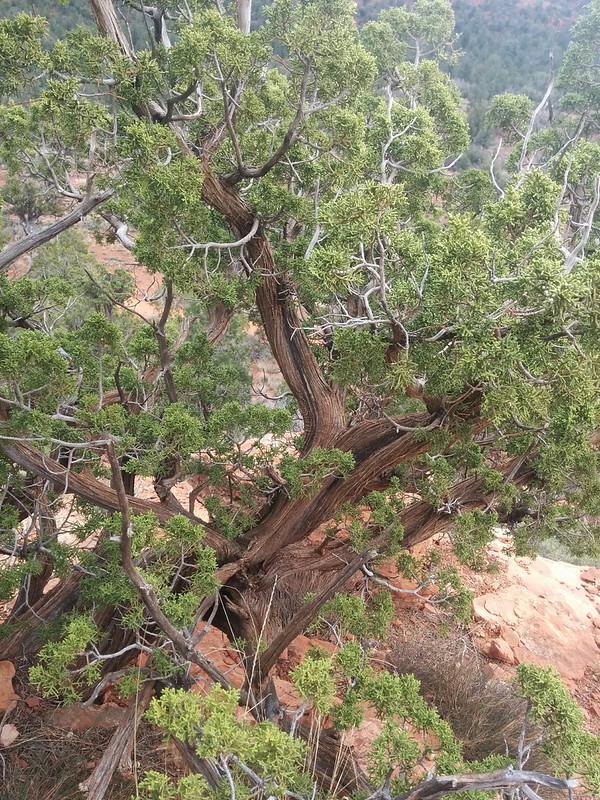 I know it may seem like we’re always hiking.  Unfortunately, that’s not the case.  75% of our day is like a relatively normal day (pretty much… we’re still living in an RV, of course… so there’s that).  We still want the things we’ve always wanted… like sweet treats.  Unfortunately, they aren’t as easy to deliver because of the eccentricities of the kitchen.  I’m a cookie maker.  I love cookies and so do Scott and the kids.  Specifically, I like chocolate chip cookies and sugar cookies.  Both very easy to make (unless you’re Christy and you forget to add an ingredient or 2 – miss you!! xoxo).  Here’s the rub.  The oven doesn’t work in the Chief.  There’s a valve that we need to replace.  However, to do that, we need a time machine back to 1985.  As we wait for Doc Brown to show up, I’m using the oven as storage.  Scott has promised to replace the ancient beast of a microwave that he pulled out of the wall in San Fran with a nice, new, little convection oven / microwave.

Having only a grill and a stove top does not make cookie-making easy.  But who needs easy when you can have… creative?!  The kids and I made the dough (and promptly sat down and ate most of it… as any proper cookie maker is want to do).  I decided to fry-cook the rest (I’m coining the term here and now –  you’re my witness).  I know you’re thinking it looks bad and sounds worse.  I get it.  It’s not a traditional cookie.  But I’ll tell you what, I’ll take a fry-cooked, crunchy on the outside, hot and a little gooey on the inside cookie over no cookie any day of the week.  Remind me to share my new brownie invention too… I can make molten brownies now without an oven too!! 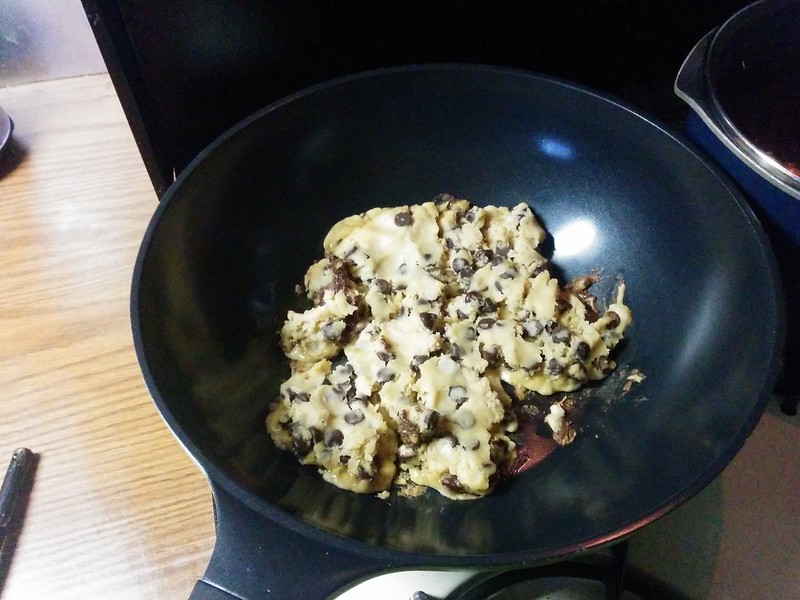 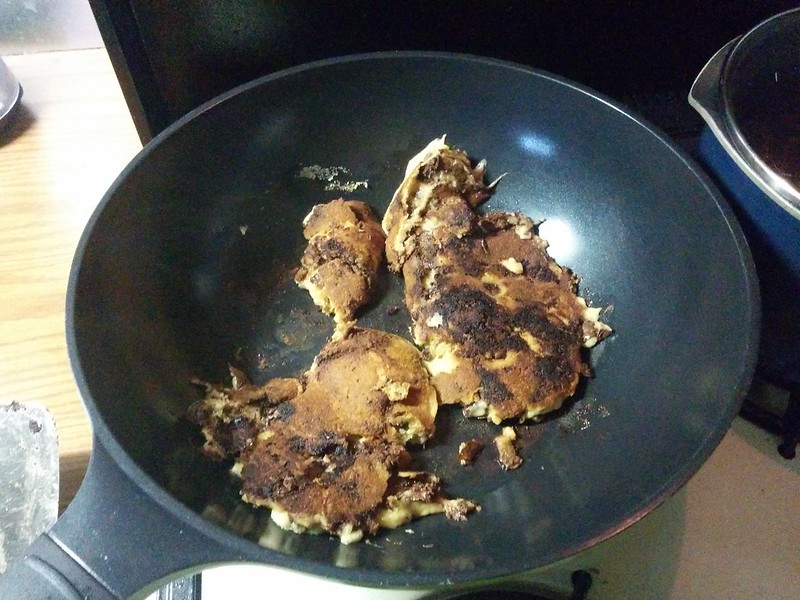 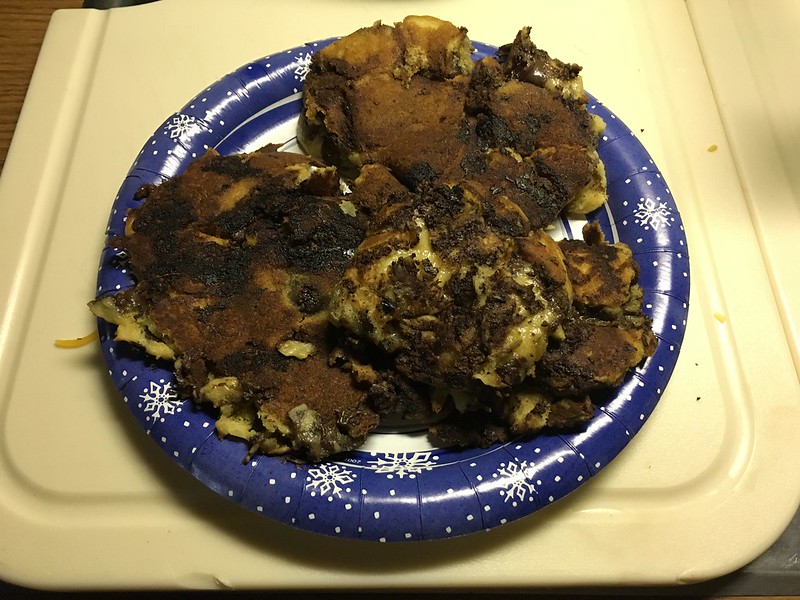 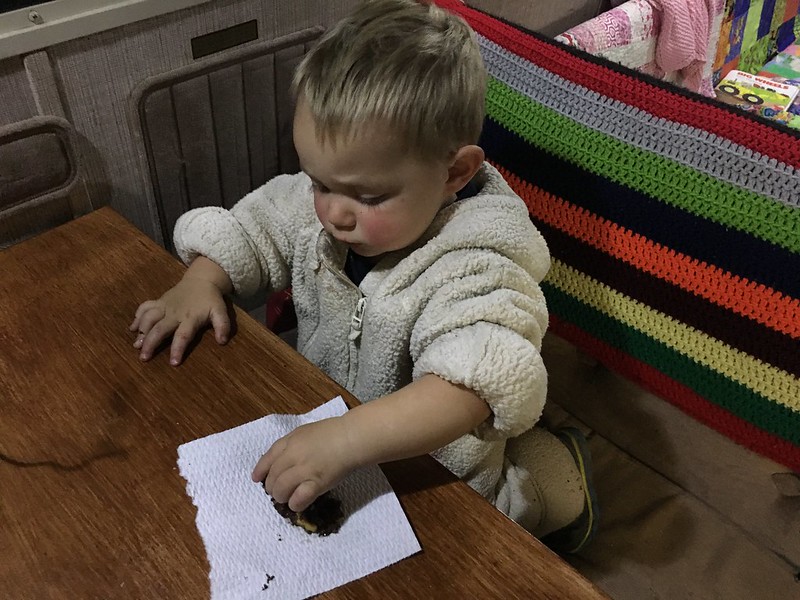 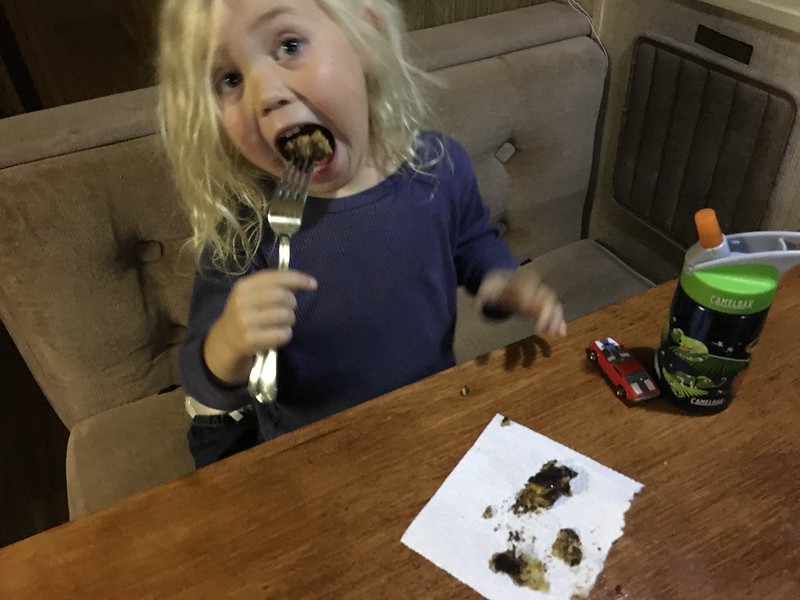 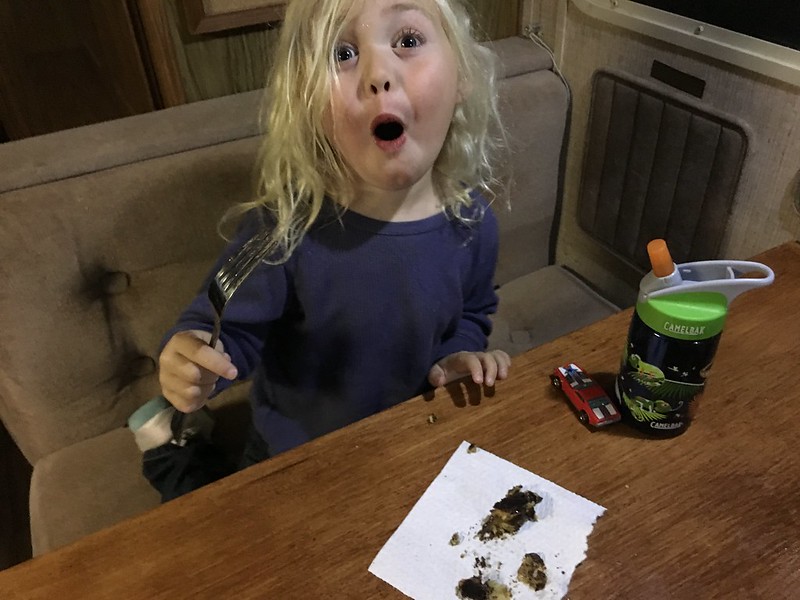 Return to The Chief

I jammed on the breaks.  The needle drops from 75 mph down to 45 in a very short space of highway. Everything from the back of the RV moved forward.  Scott calmly took off his headphones, looking at me.  Him,...