If I’m talking about Sedona, 9 times out of 10 I’m talking about the energy vortexes too.  Because I know and love you guys (everyone not in the ‘magic family’… and even some of you who are), I know you’re having a good laugh already.  I can distinctly hear, “What the hell are you talking about this time, Warren?!” So… I’m going to start with what an energy vortex is (allegedly) and then I’ll get to our visit. 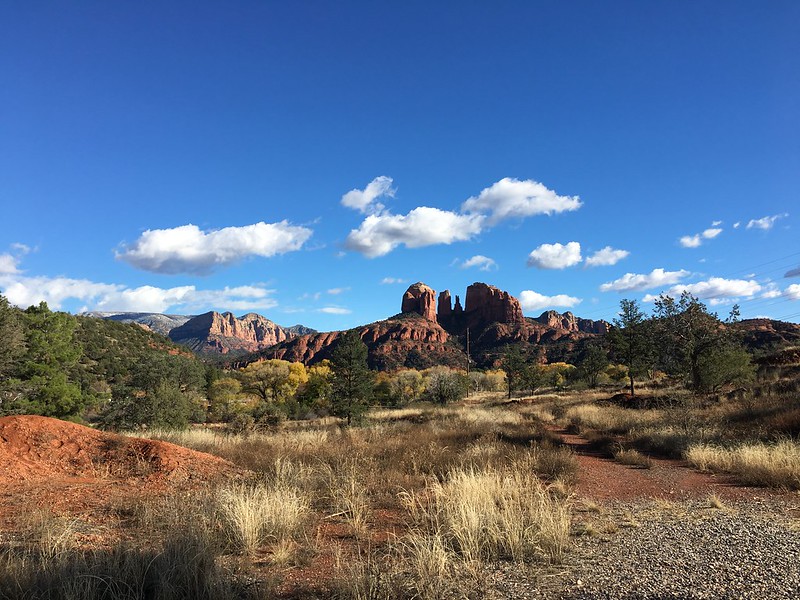 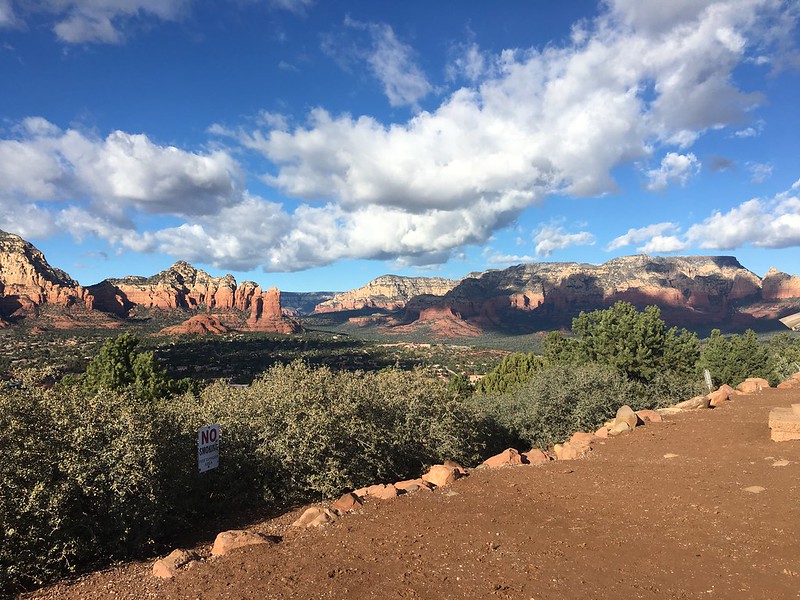 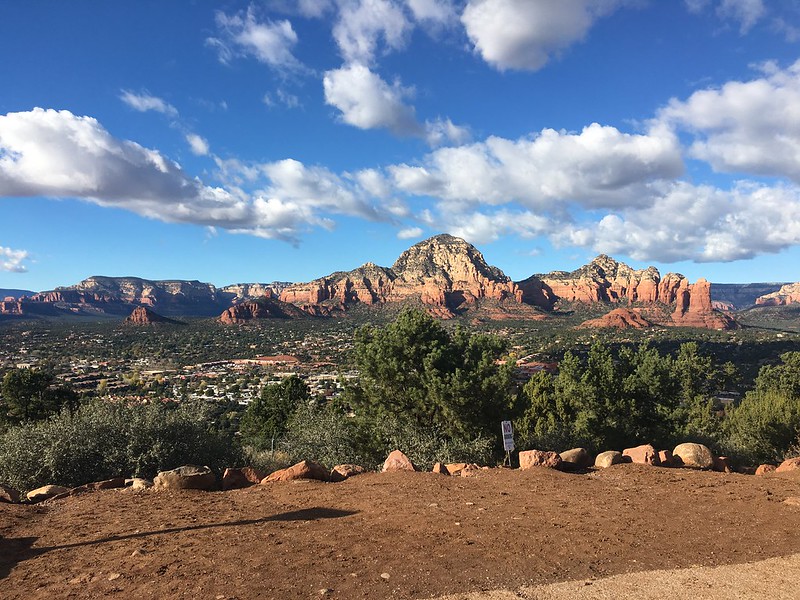 According to the current working theory, an energy vortex is a place where the divide between dimensions is less.  That sounds wicked fruity and I’m laughing as I write it.  Let me be little more specific but, heads up, we’re getting dangerously close to “glazed eyes, tell-me-when-it’s-over” science and math.  String theory is a unification theory – a theory of how the entire universe could work.  It’s an explanation of how Newton’s physics and Einstein’s physics {including quantum mechanics} relate, how gravity happens, it defines black holes…. all kind of juicy stuff.  In string theory, there are at least 10 dimensions in existence.  We operate in 3 (aka 3-D) plus time.  So what’s going on in those other dimensions and how do they impact our comfy 3?  No idea.  That’s the stuff of science fiction at this point.  But the theory goes that these “energy vortexes” are actually areas where the other dimensions are closer… the energy is more accessible.  At least that’s how I understand it.  PS  I got to meet Ed Witten, one of the leading scientists pursuing string theory when I was an undergrad.  In 2004, Time magazine stated that Witten is widely thought to be the world’s smartest living theoretical physicist.  Giddy times!!

Back to Sedona.  We found a great boondocking site less than 10 minutes from downtown and set up camp (fire road 525 if you’re heading in that direction).  Over the next few days we settled into a routine: wake up, eat breakfast, head to the library, eat lunch, go hiking, eat dinner and go to bed.  FYI, I didn’t push the library on the kids.  They pushed it on me.  It beat out of the playground every day because of the giant supply of toys.  Meanwhile I got stuck talking to a now-sober lady who appears to have accidentally fried her brain with drugs.  She was in Sedona to visit her son in lock-up.  She got into how her boyfriends (that’s plural) beat her, her dire economic situation and her use of prescription medication.  All that and I never once asked her a question. 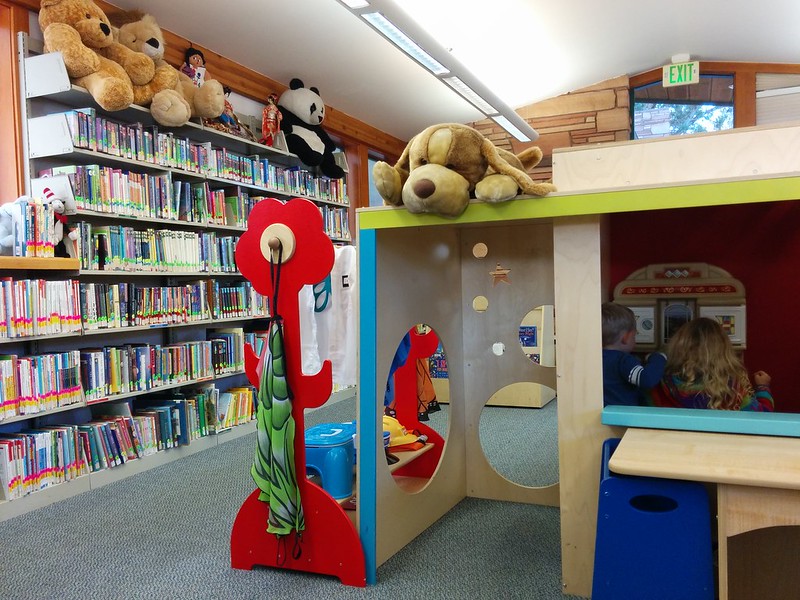 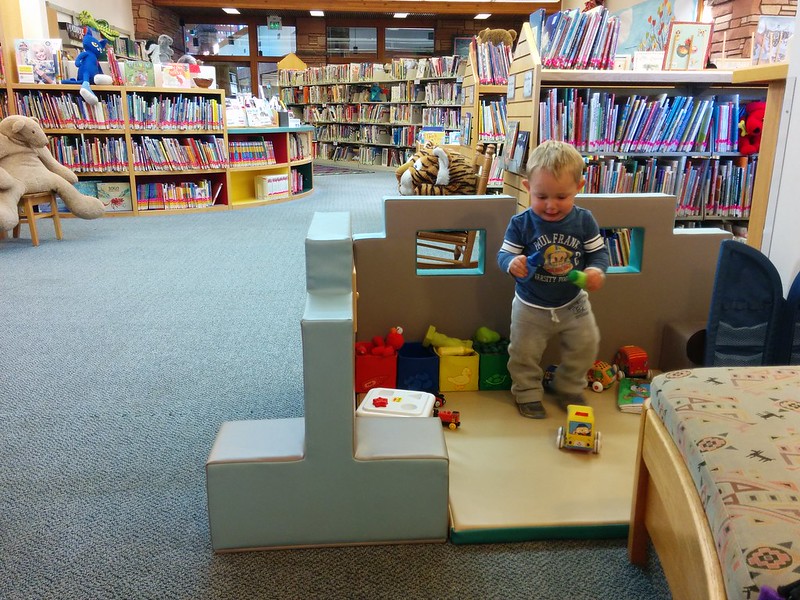 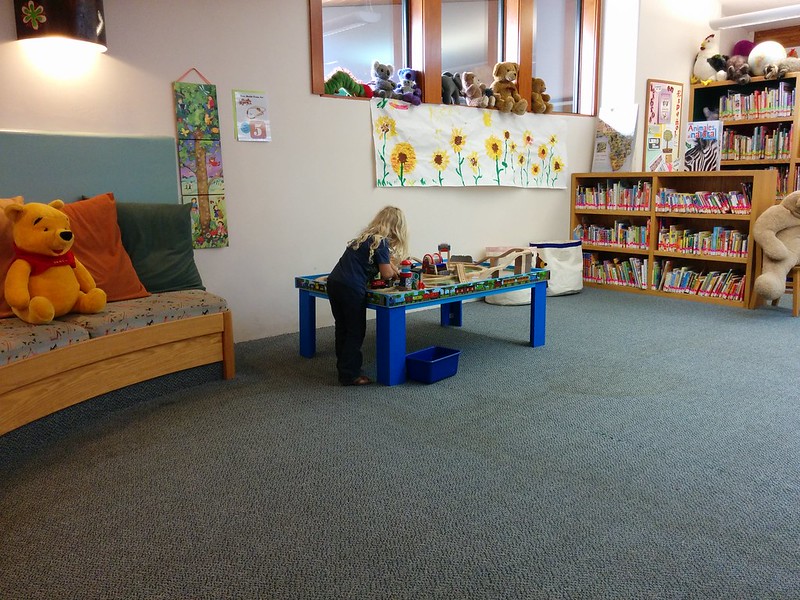 Hiking Bell Rock.  It’s one of the big draws to Sedona.  There are hypotheses out there that an alien spaceship is buried under it…. or it is an actual portal.  You can really get as weird as you want out here and no one bats an eye.  I had a lady once tell me she goes into the rocks and talks with the “rock people”.  Every now and again I knock on a rock and ask if I can come in.

I’ve been to Bell Rock several times and never seen or heard anything out of the ordinary.  I will say, though, that I feel great when I’m there.  Is it because I’m outside – hiking, fresh air, outstanding views, nature – highly likely.  Does the energy feel different?  I don’t know.  I like it.  I keep going back.  This was Scott’s second visit as well.  The first time he bumped into Vice President Joe Biden on the trail (see…. we aren’t the only nutters who like the spot).  Evie showed off some of her developing rock climbing skills when we accidentally got on the black diamond trail. 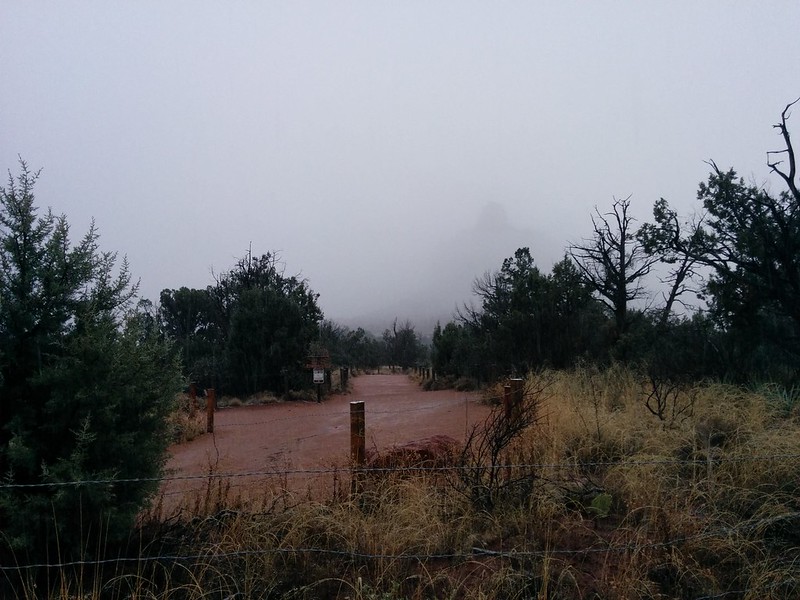 Arrival Day – we stopped by Bell Rock.  It’s getting a dump of snow. 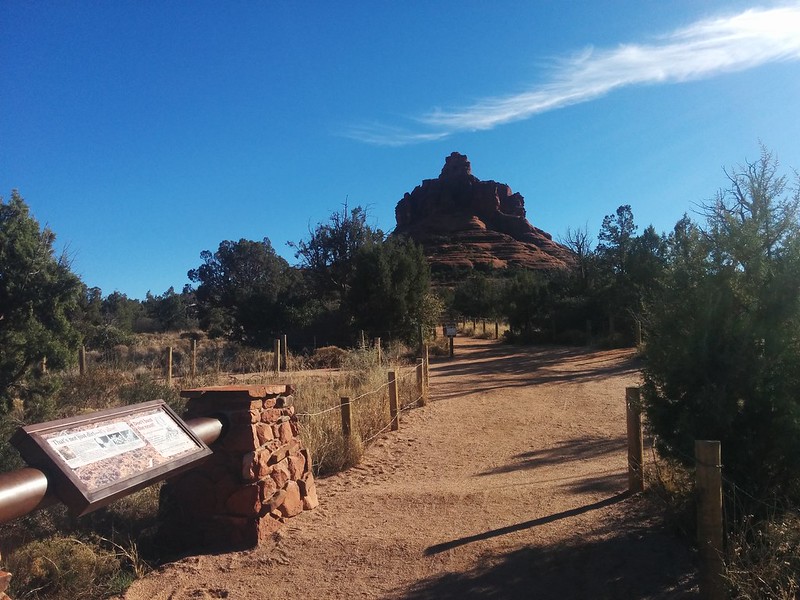 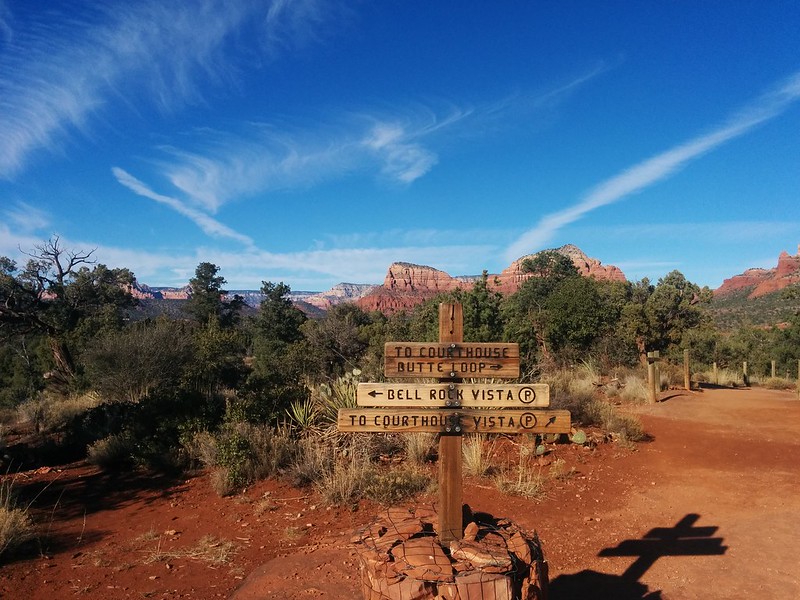 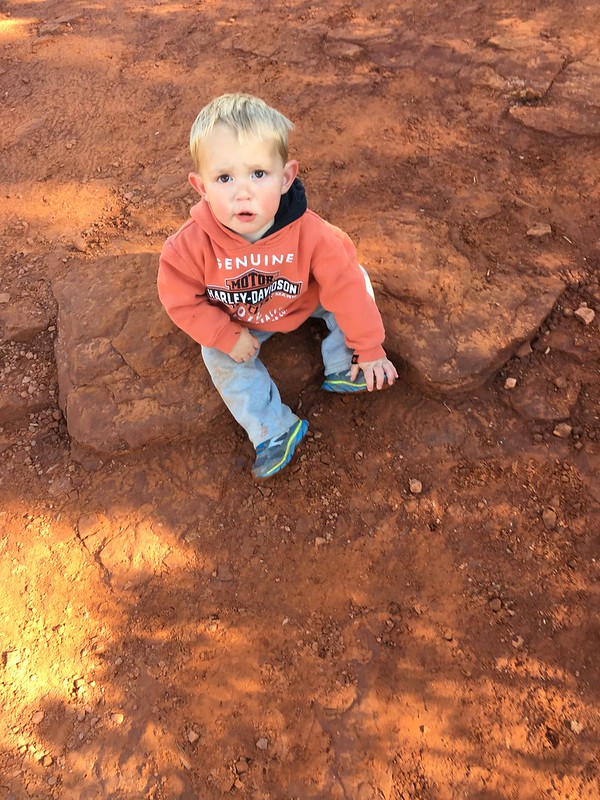 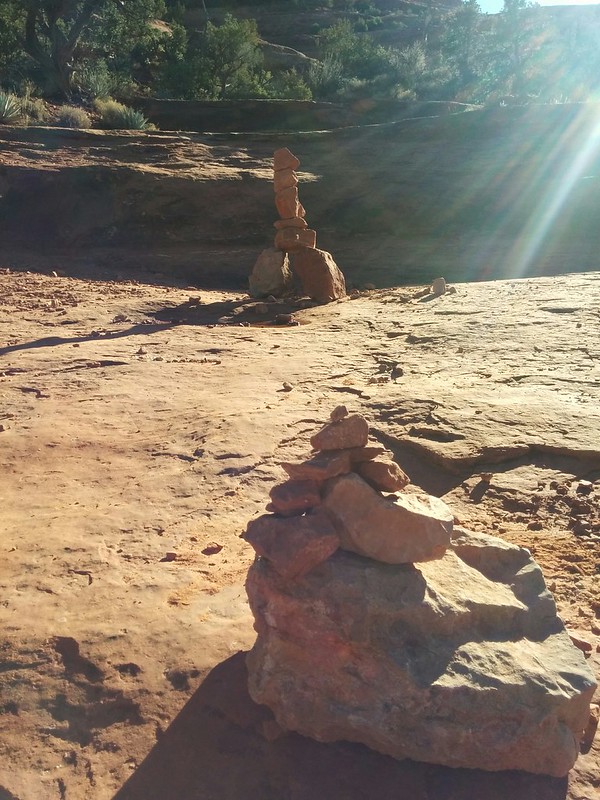 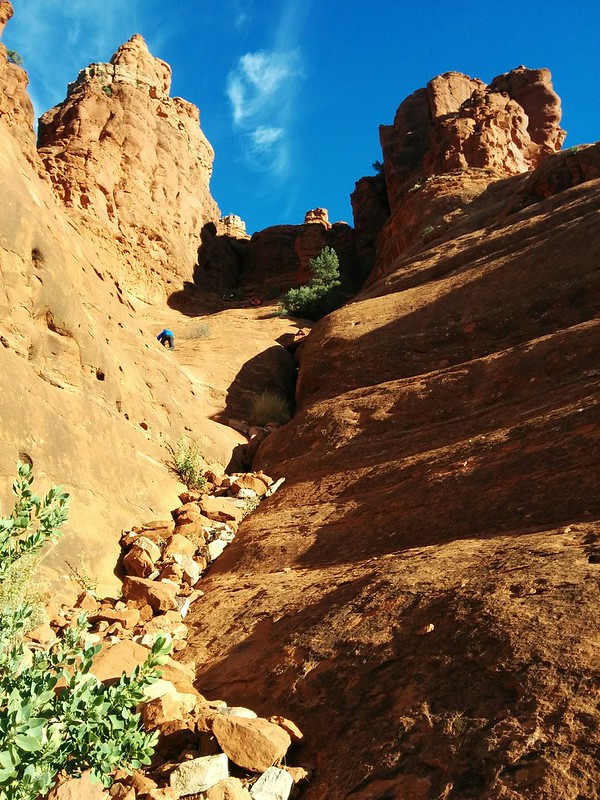 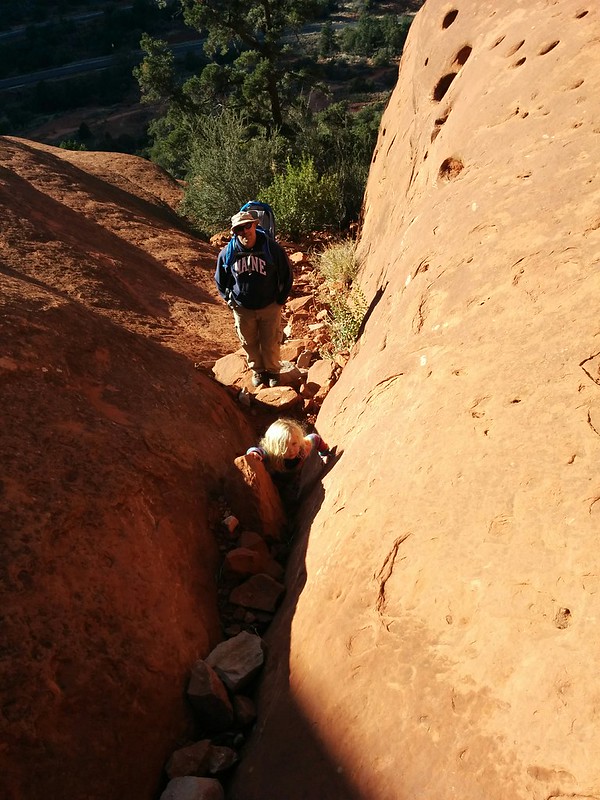 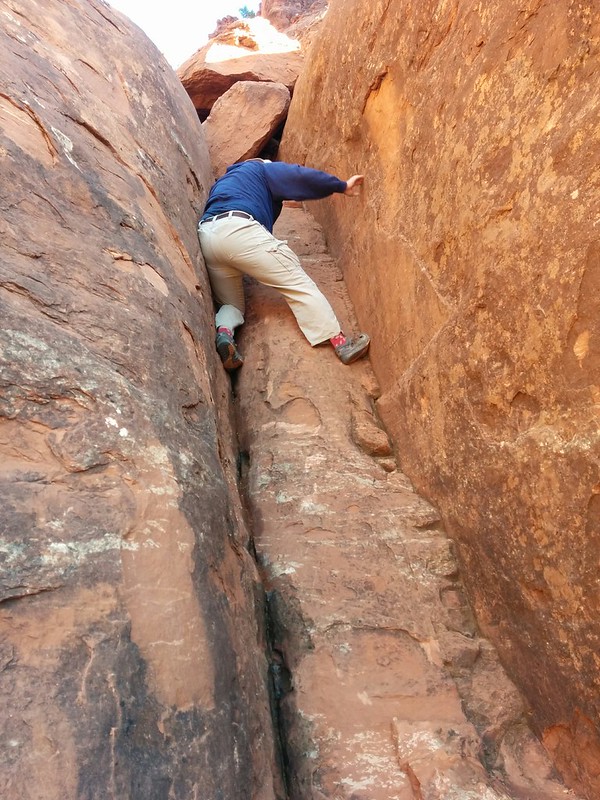 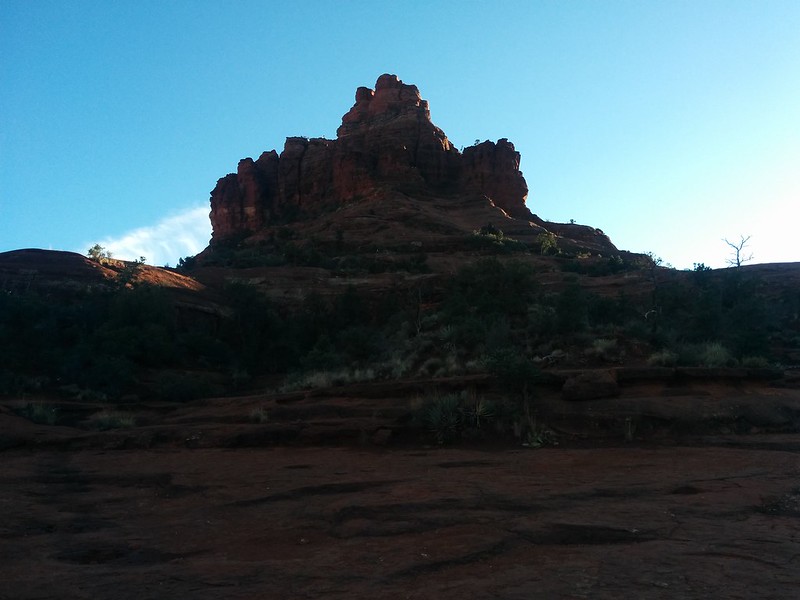 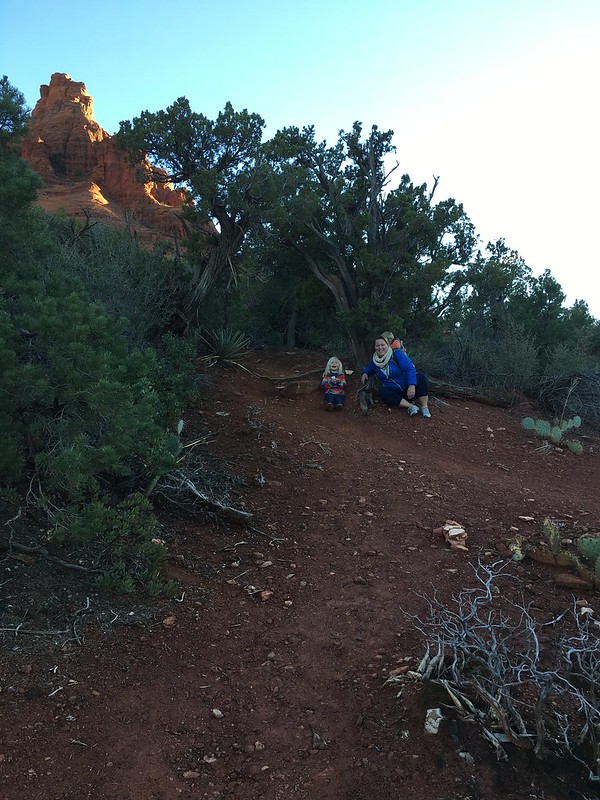 Evie and I came to Bell Rock when she was 6 weeks old.  We flew into Arizona for Scott’s graduation from Thunderbird right before returning to Istanbul.  She and I took a day trip up to…. you know… “take in the energy”.  Here’s a pic or 2 from 2013: 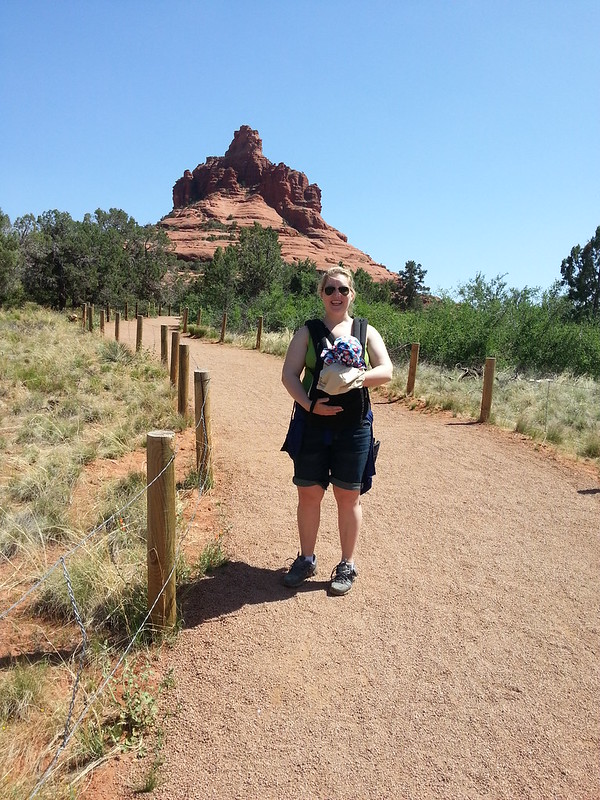 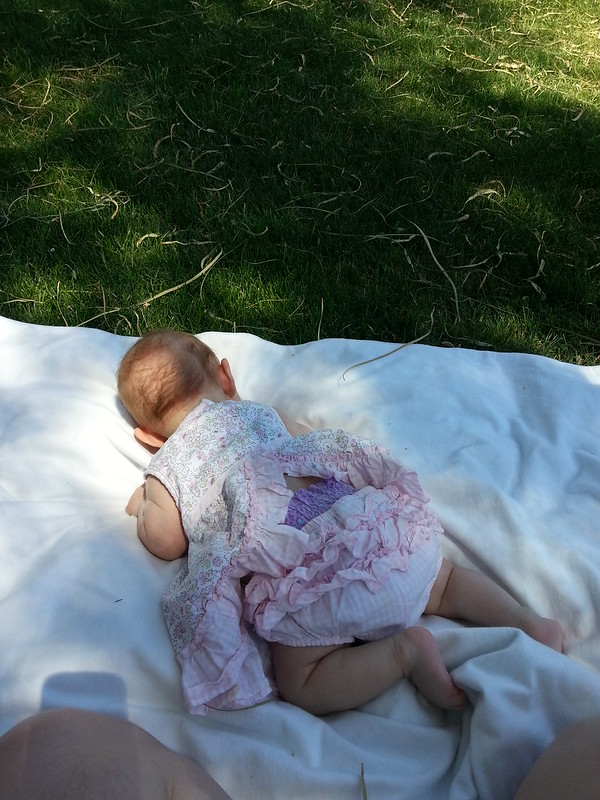 We might be dangerously close to beach bum territory at this point.  As is usually the case when we’re in one of these mystical hot spots, he had some interesting business develop.  He may have a new product line which has inspired him to work like a dog to get it ready to roll out.  Hopefully it turns into something interesting. 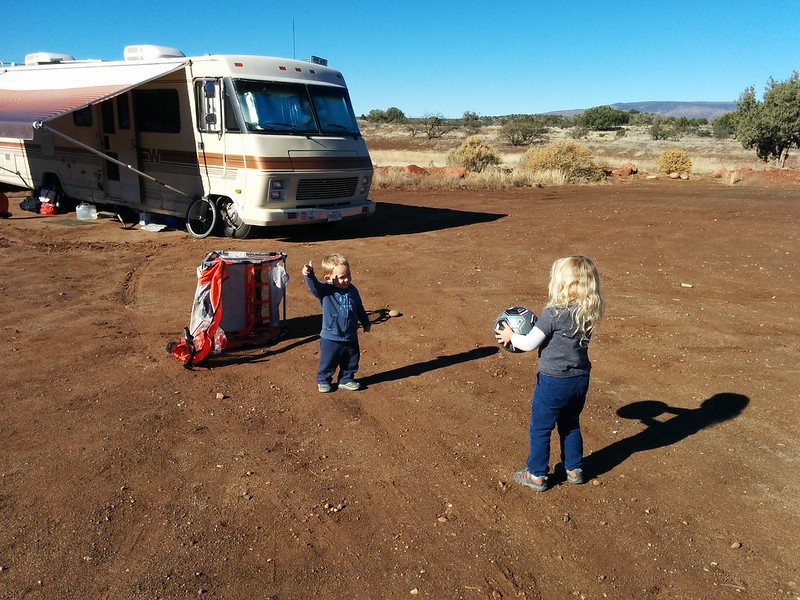 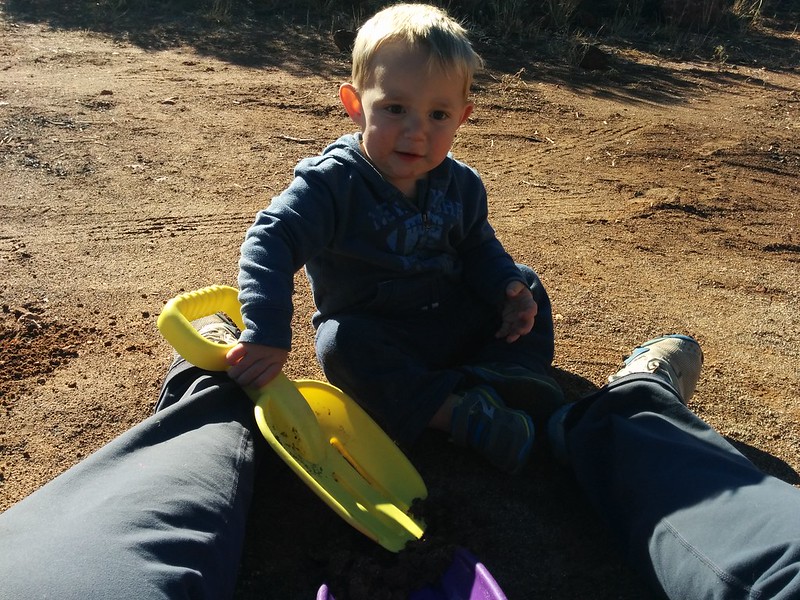 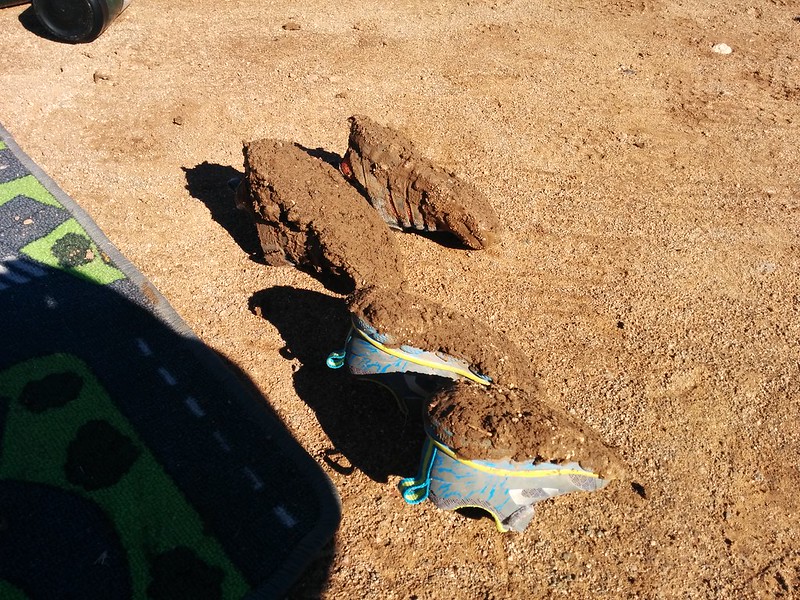 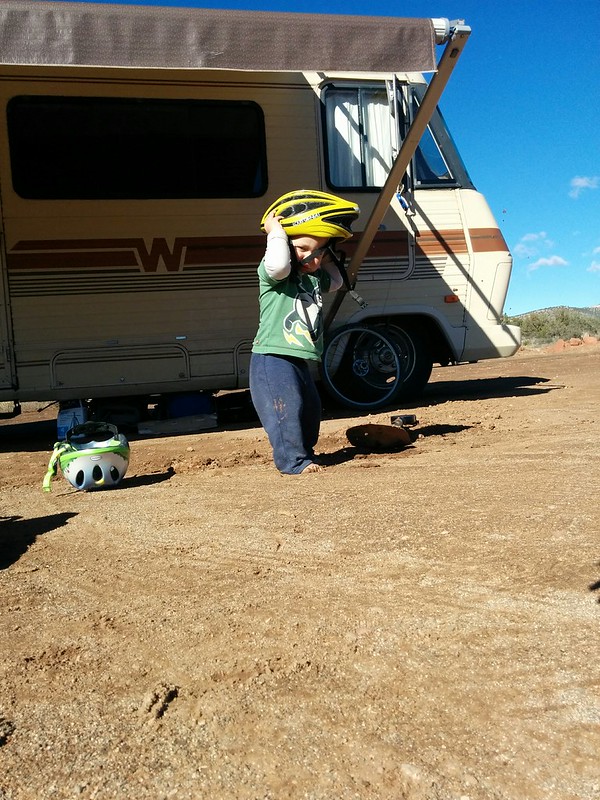 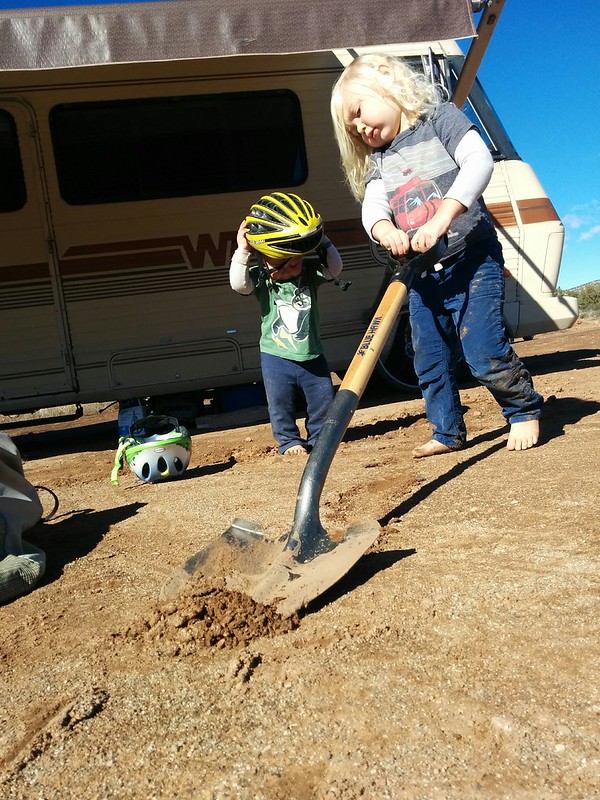 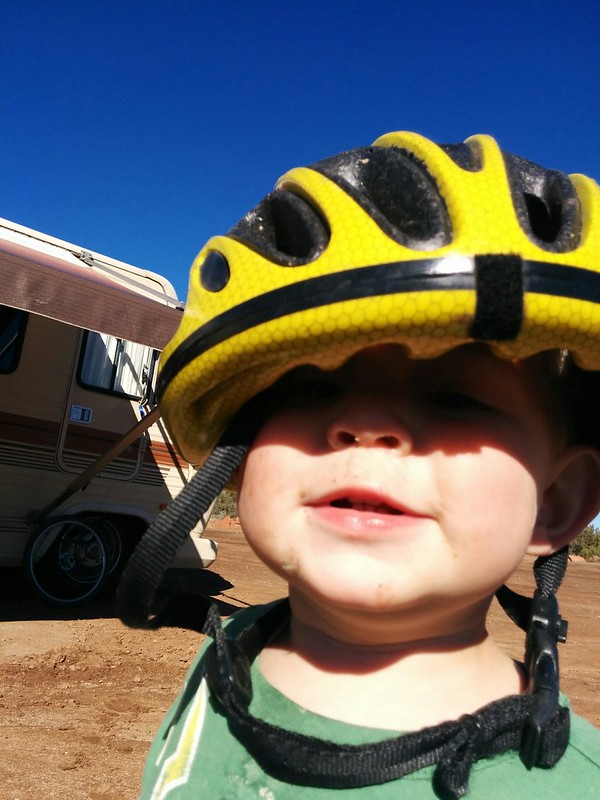 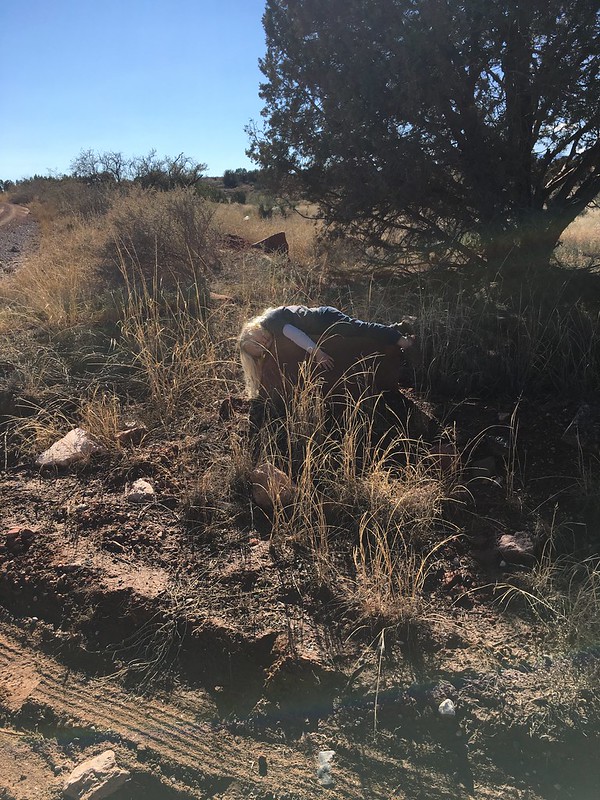 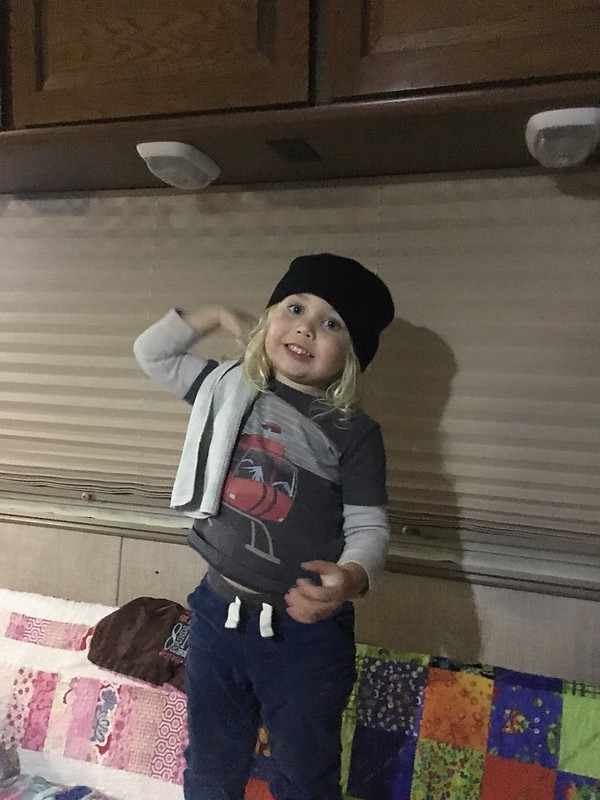 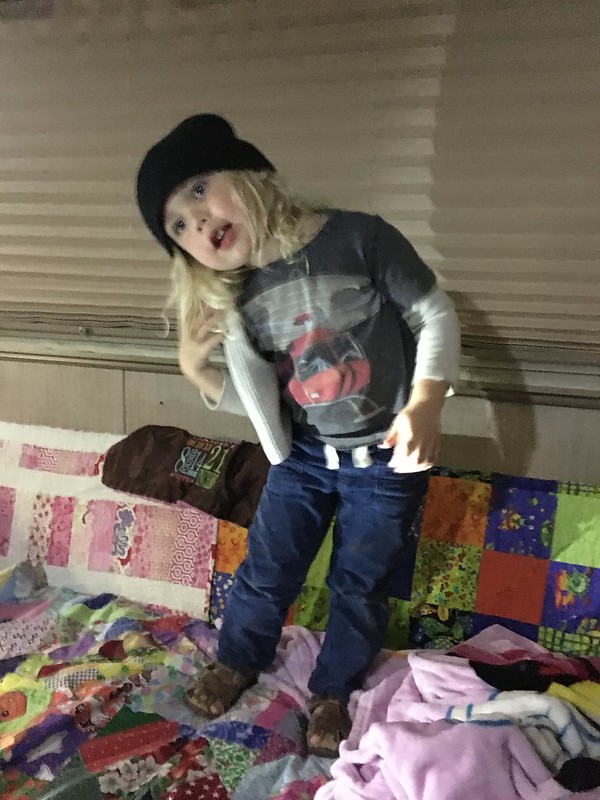 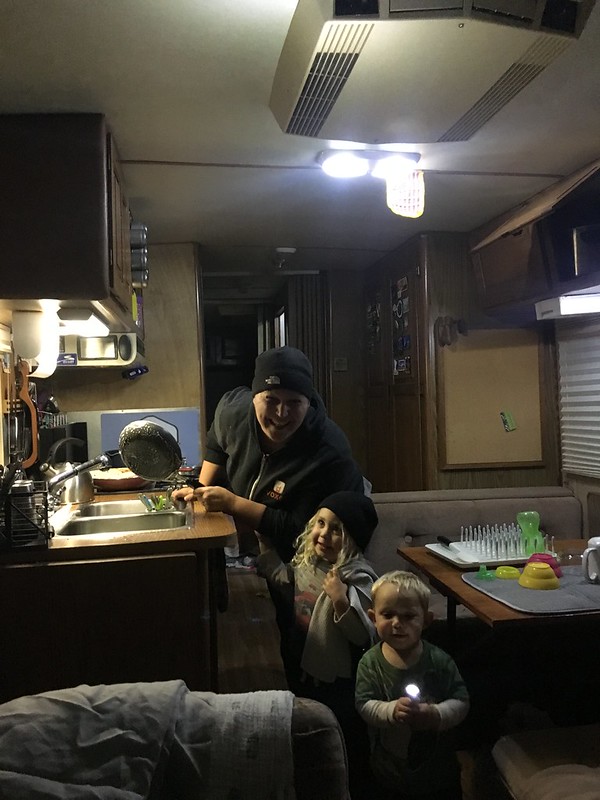 Did I mention that it snowed the day we arrived?  Yeah… it snowed.  Temps were below freezing at night.  I don’t think camping in the cold is particularly fun.  I prefer warm temps and little to no wind.  But it wasn’t unbearable either.  There was a group of homeless guys who spent the night in a car just down from us so I think the fact that we had heat and plenty of blankets really put our situation into perspective for me.  We were comfortable.  Judging by the loud swearing at 4 am, they were not. 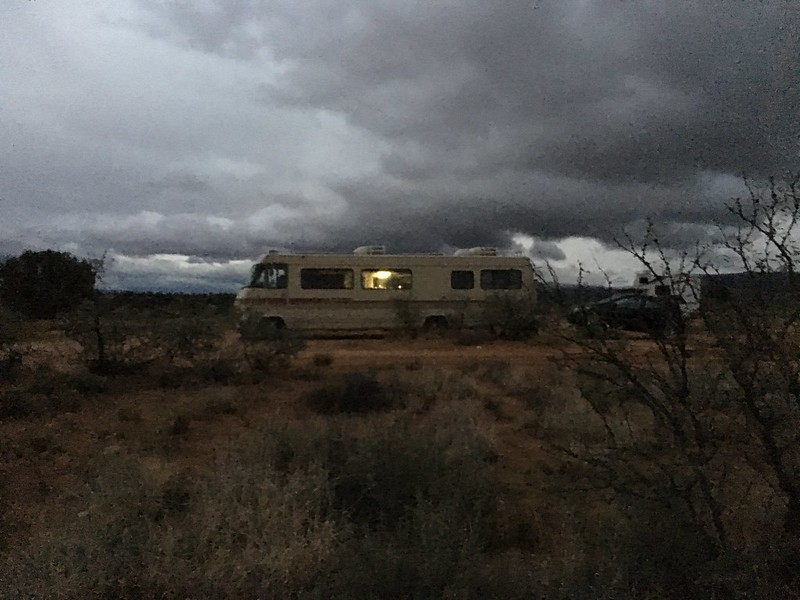 We’ve been in Sedona a while… long enough to warrant a second pos because this isn’t even close to all of it!
Click here for Sedona #2 (may not work yet – I haven’t written it!)

Previous Post
Sedona – The Airport and the Chapel
Next Post
The Night After Boondocking: Our Daily Life

When There Is No Emergency Room, But You Know You Need One!

Ker-thump.  I was off the bed, scooping Jack up from the cement floor in less than a heartbeat. Even though he's a monkey, Jack was in a little bit too much of a hurry to climb the ladder to the...

The kids got to spend a lot of quality time with their most Supreme, Biggest Stars on the Planet VVVVVIPs.... Grandmom, Grammie Denise, Grandpa Mike and Nate this holiday season.  It goes without saying that the spirit of Grandad was...