Reunited and It Feels So Good

I thought when you let RVs sit for awhile, creepy crawlies made them into home.   I get it – it’s comfy.  I suppose that’s because birds and squirrels always felt welcome in Great Grandma Howes’ travel trailer down to Pink Camp.  Granted, that was 1950s technology and we let it sit ALL winter…. and spring…. and most of fall….  Perhaps I overestimated the abilities of our furry, feathered or flexible friends.  I’d love to tell you that we used some magic mixture of DEET and lavender…. if I had, I’d put a big fat Amazon link up and encourage you to try it.  (Ok, but I still put the Amazon link in on the off chance you just remembered you wanted to buy something).   Instead, as usual, it seems the best thing to do is keep the RV as clean as possible.  No need to use weird chemicals that are more likely to kill you than anything else.

We’re back in action.  We flew into Phoenix airport on the 10th, overnighted at a hotel because it was late and… kids.  In the morning, everyone got their “one last bath” then we drove out to pick up the Chief.  The RV got to live next to horses and a goat.  When Evie saw it she clapped her hands together and said, “How lucky was the Chief?!”  I totally agree.  We had parked the RV at Michelle and Chad’s folks’ home, just outside of Phoenix.  They were so sweet and generous – another BIG BIG thank you to Bill, Debbie, Chad and Michelle.  You have the biggest hearts and we look forward to spending time with you again. 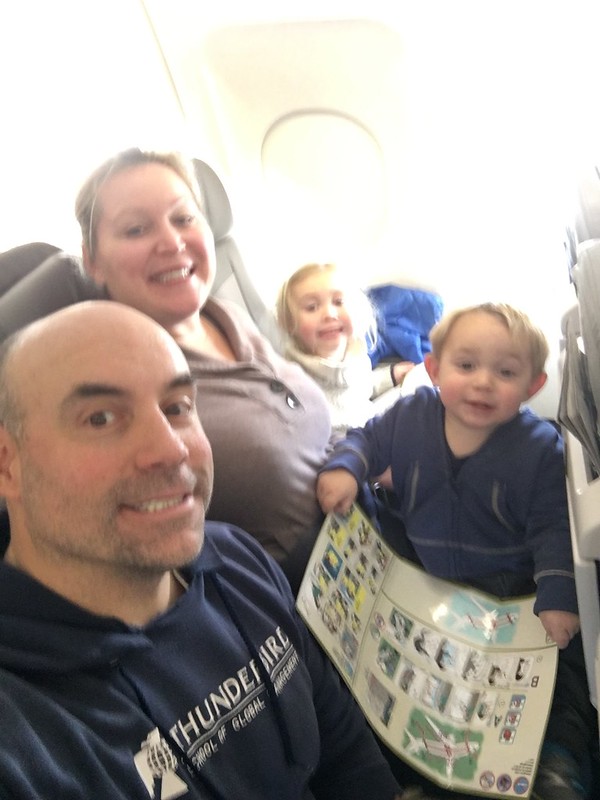 The sticker in the next picture was given to her by the pilot (an awesome lady)… which led to nice conversation about how Lorna flies airplanes and one day she’s going to teach Evie and Jack how to do it.  I feel like we should all have some familiarity with it – just in case one day you find yourself in a cockpit at 30,000ft with no one to fly the plane. 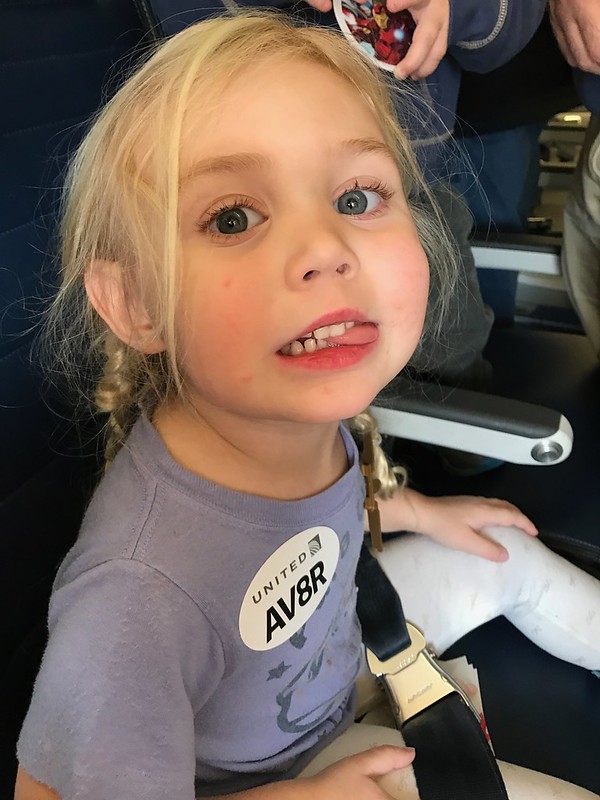 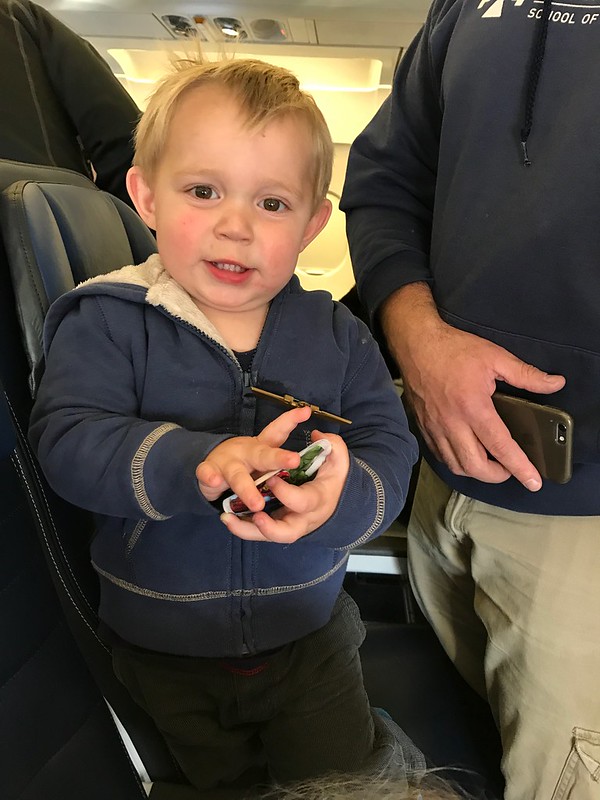 We left with 3 backpacks, 2 car seats and 1 dog carrier.  How the hell am I supposed to fit THIS into the Chief?!  There are 3 giant bags on that luggage cart.  It is literally overflowing.  Awesome for me. 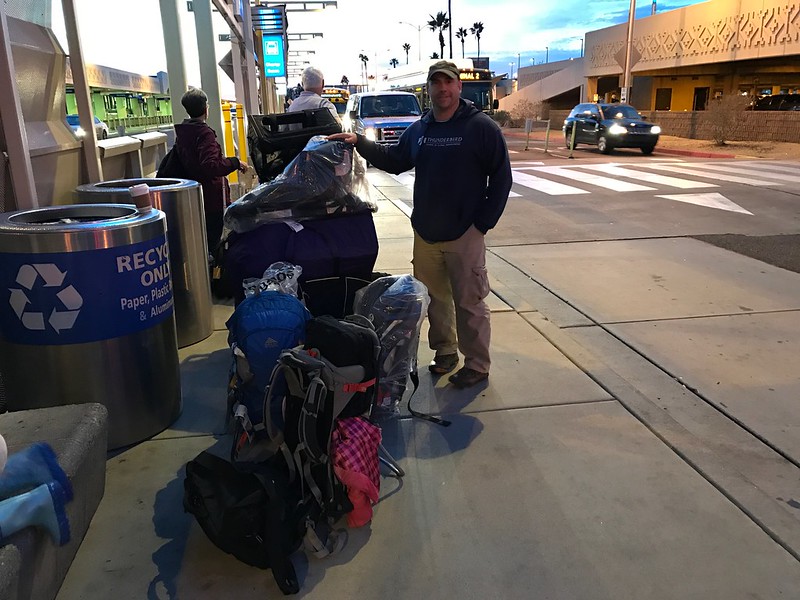 No wonder a queen size bed feels cramped when this little Space Eater is sleeping next to you. 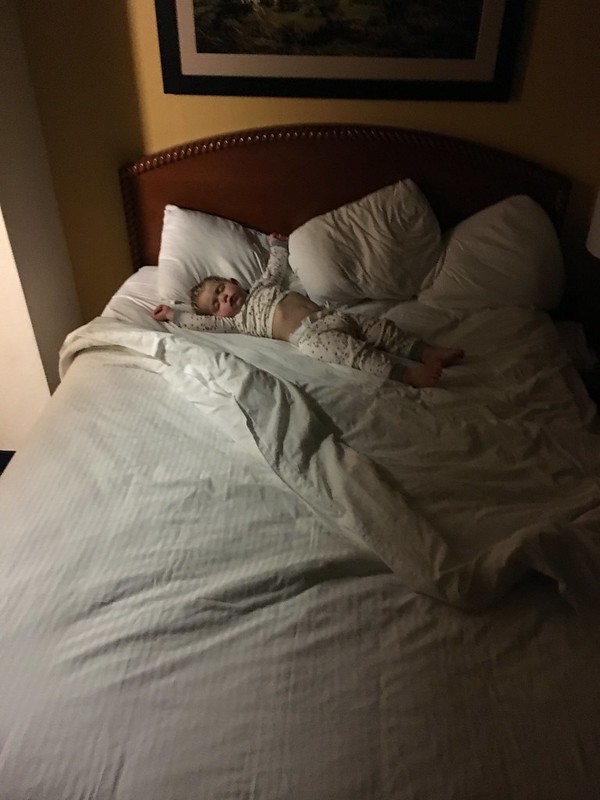 After a night in a campground to fill up and get our camping feet under us, we headed out to almost-free land.  We’re set up on Arizona Trust land.  The permit is $20 for a year.  I’ll take that.  Of course, the signs that read “Red flags will be placed here during live artillery practice”.  We read that, paused for a sec….  No red flags today.  Ok, sounds good.  Proceed. 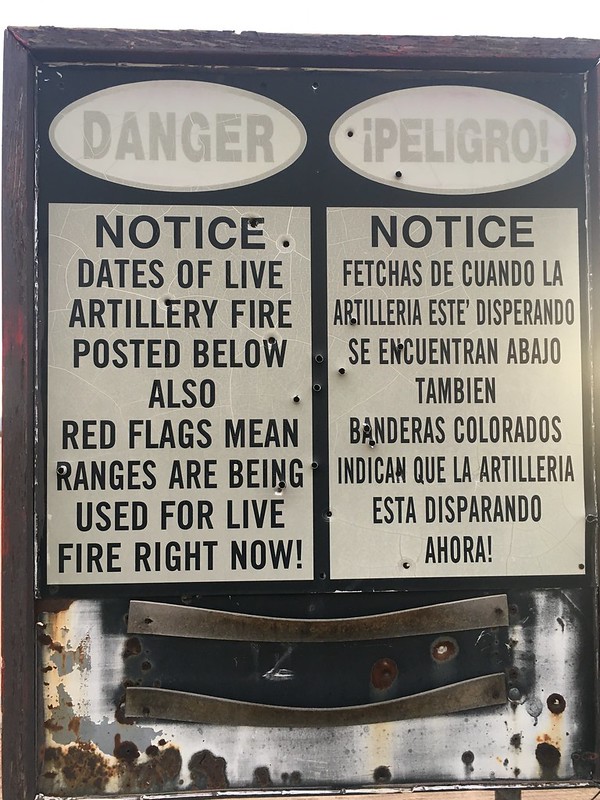 So here’s a funny lesson.  Not all Walmarts stock all products.  That may seem obvious, but…. not really.  We expected them to all have the big stuff.

Santa brought Evie a ‘big girl’ bicycle.  It was a big deal.

The bike is shockingly heavy for being so little.  Scott says the less you pay for a bike, the more it weighs.  Evie’s weighs a lot more than my hand-me-down-from-Scott’s-expensive-bike-days.  We decided to go easy on ourselves – instead of dismantling it, fitting it into luggage (which was clearly already full) and bringing it with us on the plane, we availed ourselves of Walmart’s “shipping services”.  Never heard of it?!  I wouldn’t ask a Walmart employee for it by name.

Here’s how it works, we brought the unused bike {back} to Walmart (Maine winter – it never saw the outside).  They take it.  When we arrived in Phoenix, we planned to head to the closest Walmart to “pick it up”.  Unlike Maine, however, Walmarts in AZ only stock the more expensive Spiderman and Superman red bikes…. there’s no red rocket bikes to be had.  It goes without saying that it has to be THE bike that Santa brought.  So what to do, what to do?!  That’s a problem yet to be solved.  Thankfully the “shipping department” can be slow so we’ve got a few days to work on it.

Scott is currently working on fixing a different problem – the automatic step.  I’m sure you haven’t forgotten that the metal arm snapped as we were leaving Sedona.  The replacement arrived in Maine.  He swapped them out but now there’s no juice to the little motor.  He tried soldering an obviously broken wire (big kudos to me for bringing my travel soldering iron) but that didn’t do the trick.  Looks like we’re going to have to replace the entire board.  Back to retracting the step with our trusty bungee chord and bright orange straps for now.  Very classy. 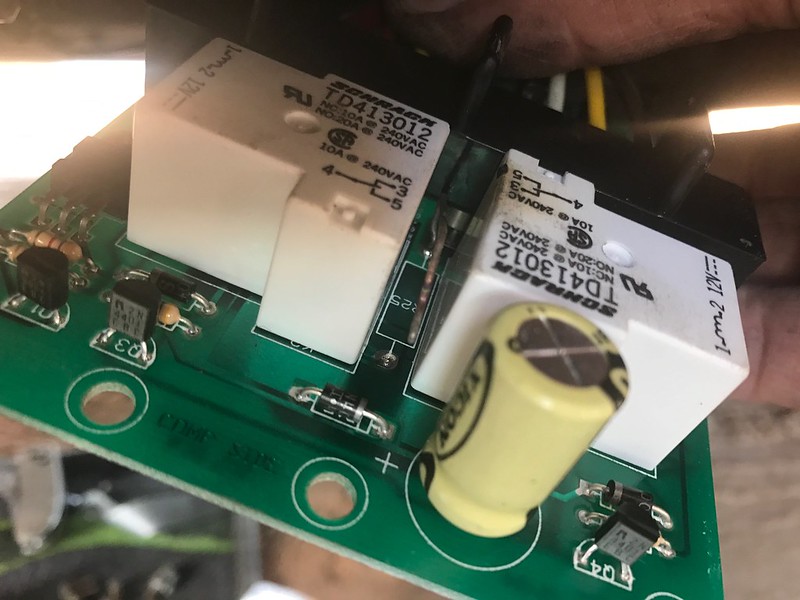 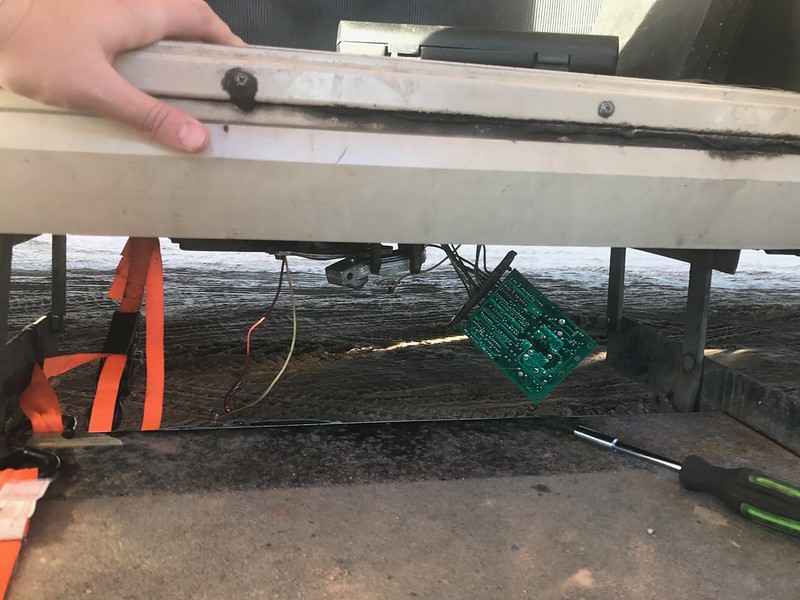 We also got an oil change for the Chief.  If ever in the area, we highly recommend Quality Truck Repair in Phoenix, AZ.  They got us right in and had the RV out in under an hour.   Total cost $76.89.  If you’re wondering, we use diesel oil.  If you want to know why, ask Scott.  This is our first change since setting out in August. 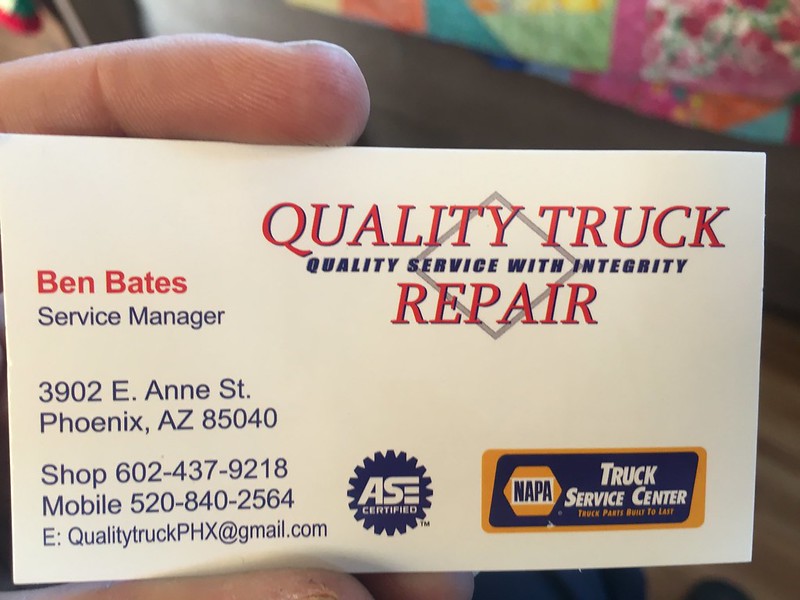 As is always the case with us, all plans are subject to change until 5 minutes prior to proposed launch.  That being said, the current plan is to make our way to Texas.  Technically we’re ready to haul.  However, we just found out that my uncle and cousin are close so we’re going to stick around an extra day.  Corey is riding a bike across the U.S. to raise awareness for Mission 22.  It’s entirely possible that they’ll make better time than we do (wouldn’t that just be a kick in the pants?!), but seriously, on the off chance that this is our one and only shot to see them we’re going to make it happen. 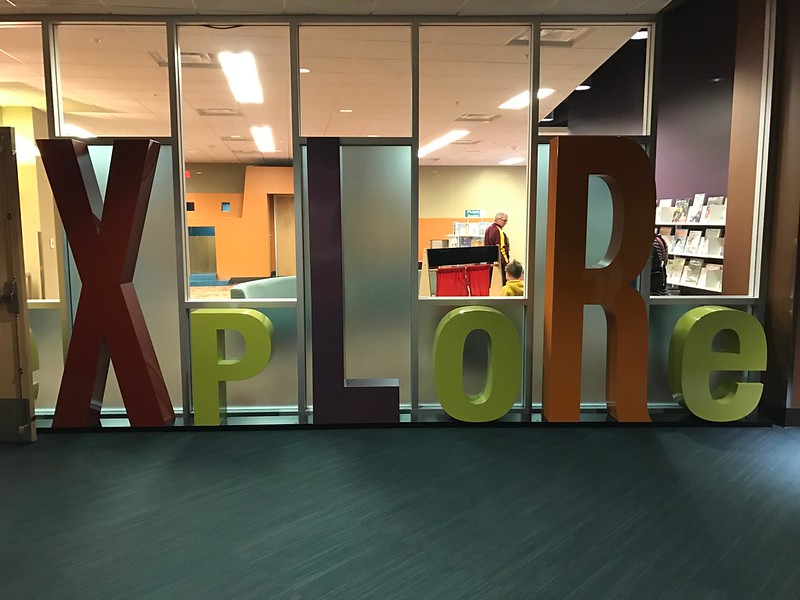 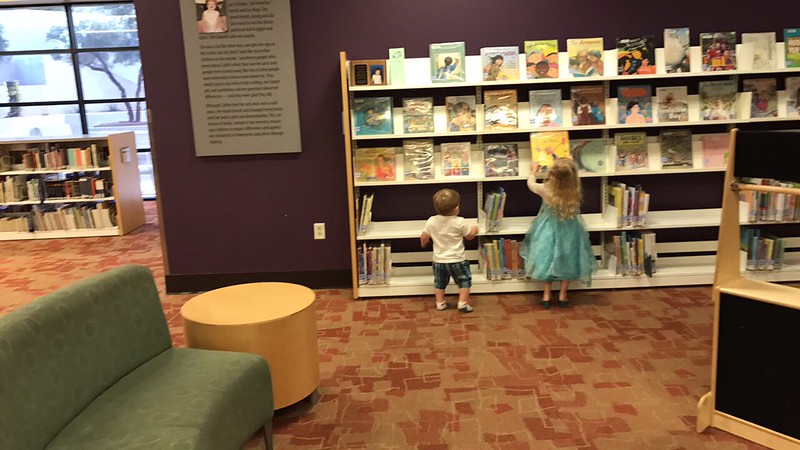 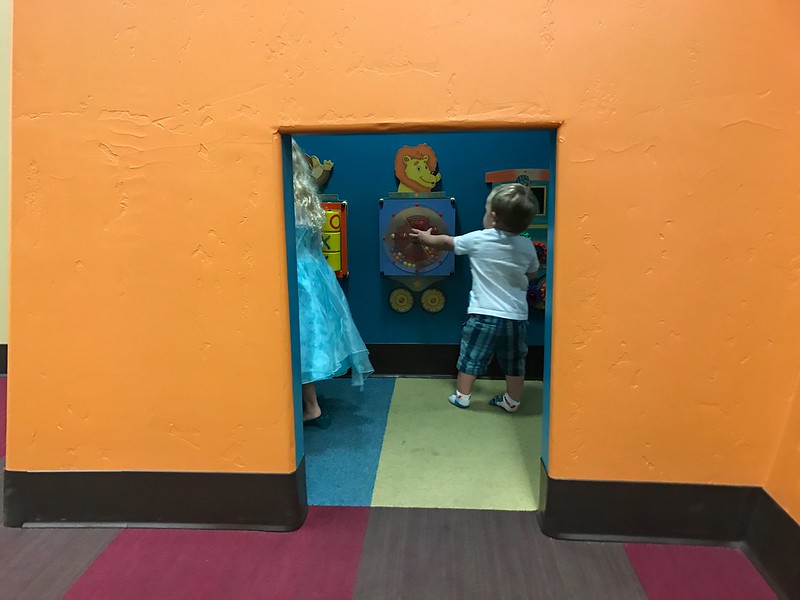 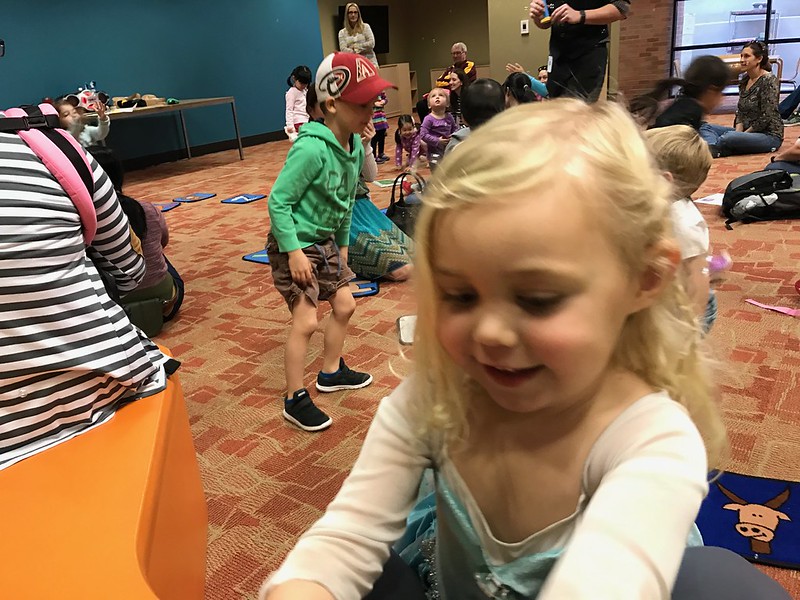 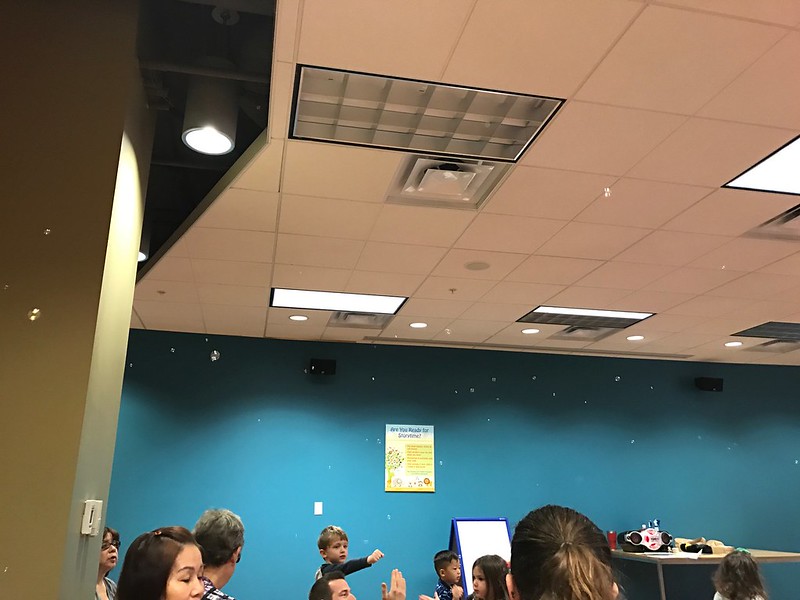 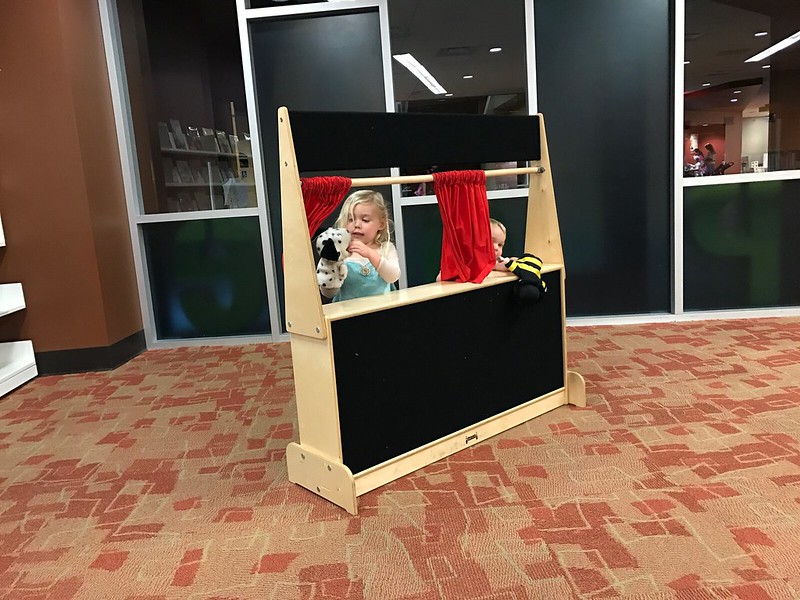 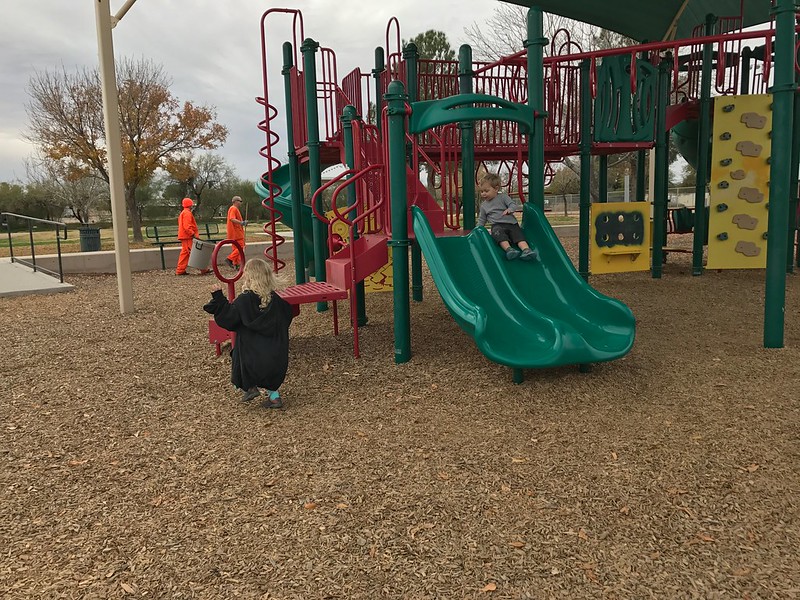 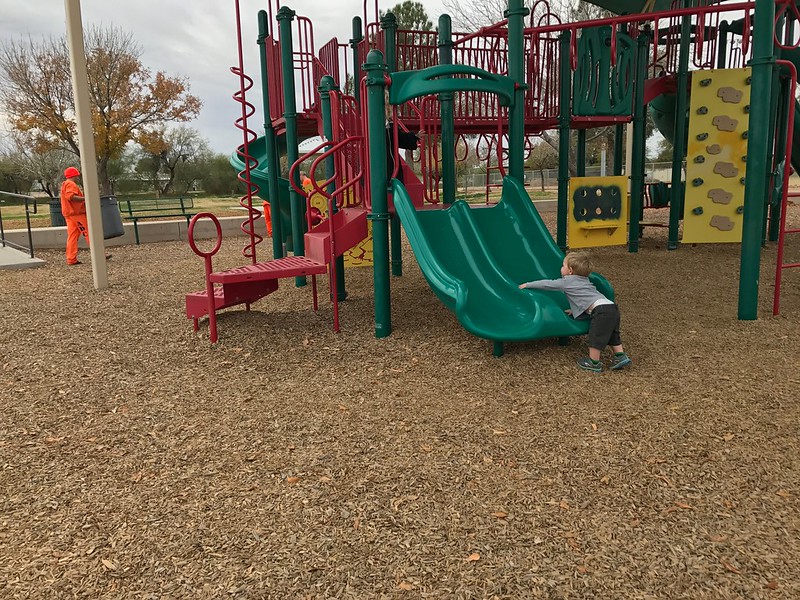 Anyone looking closely might note the men in the orange… uniforms, jumpsuits?!  Florence is home to what appears to be 2 large correctional facilities.  One clearly puts the “max” in supermax.  I suspect these gentleman were from the other facility.  I wasn’t sure we were allowed to play while they were cleaning up leaves, but I said hi to the police escort and no one stopped us.  So we got to hang out with a work crew.  I hope it’s not disrespectful that I had, “That’s the sound of the men… working on the chain… ga-a-ang…” running on a loop in my head.  I’m not sure what the rules are so instead of saying hello, I just smiled at them.  I got the sense that they enjoyed watching the kids play. 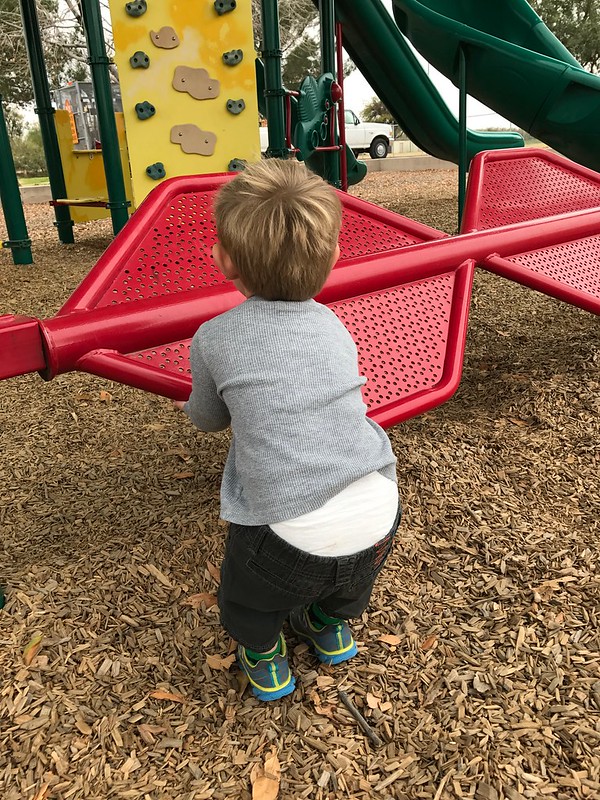 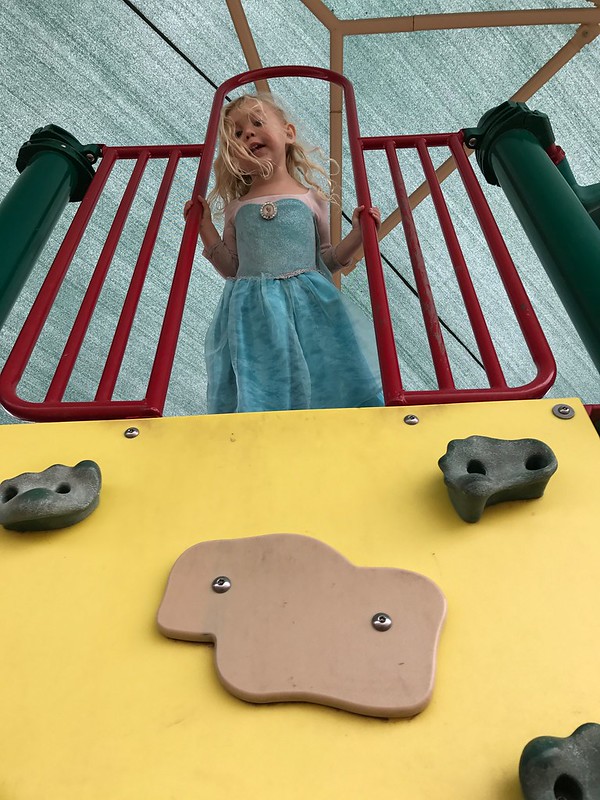 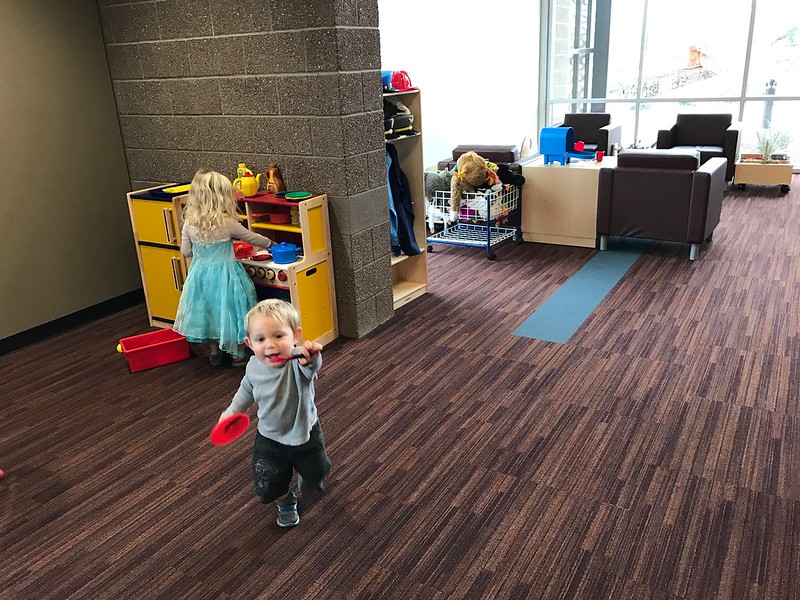 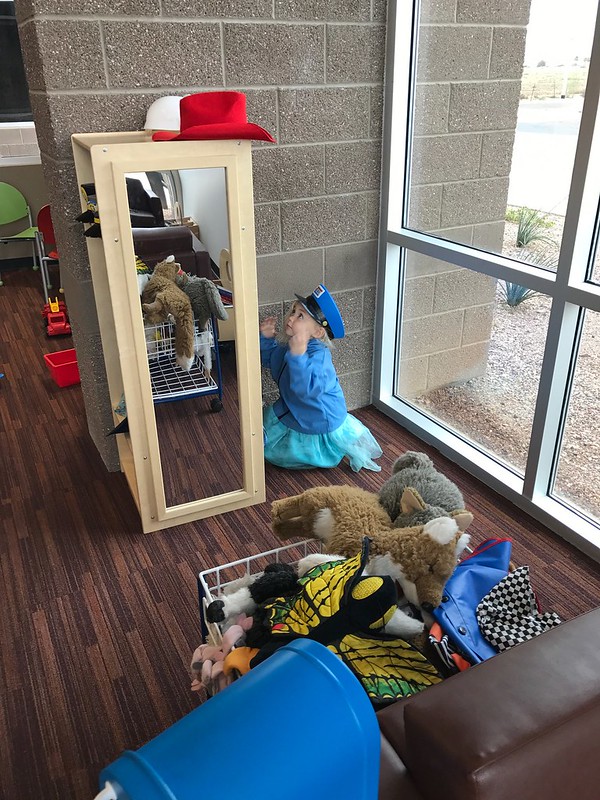 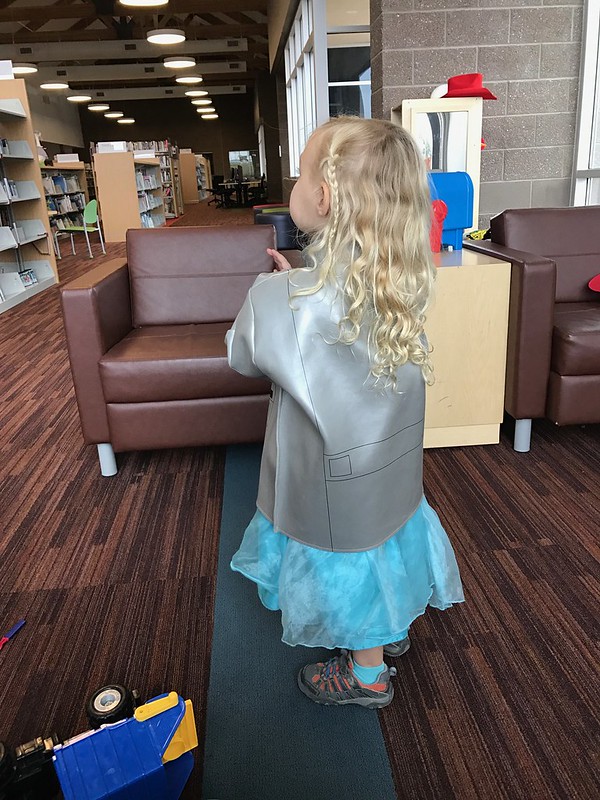 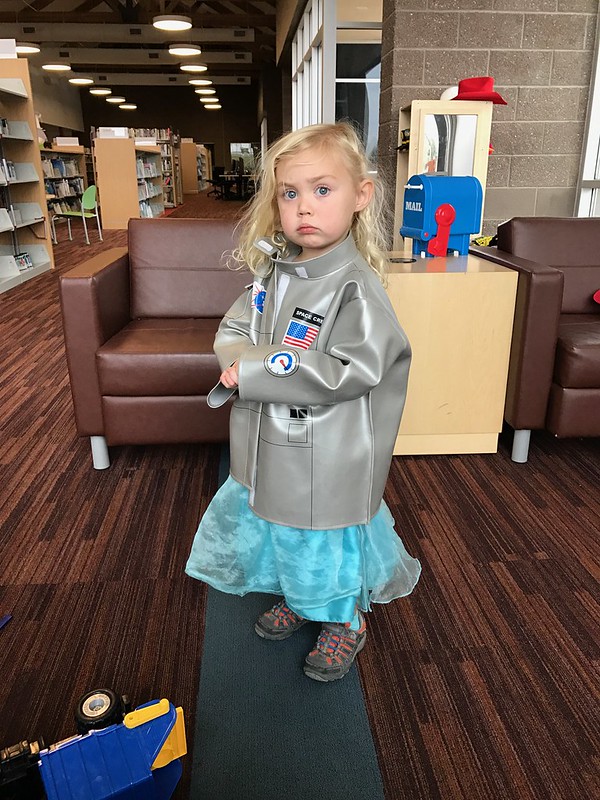 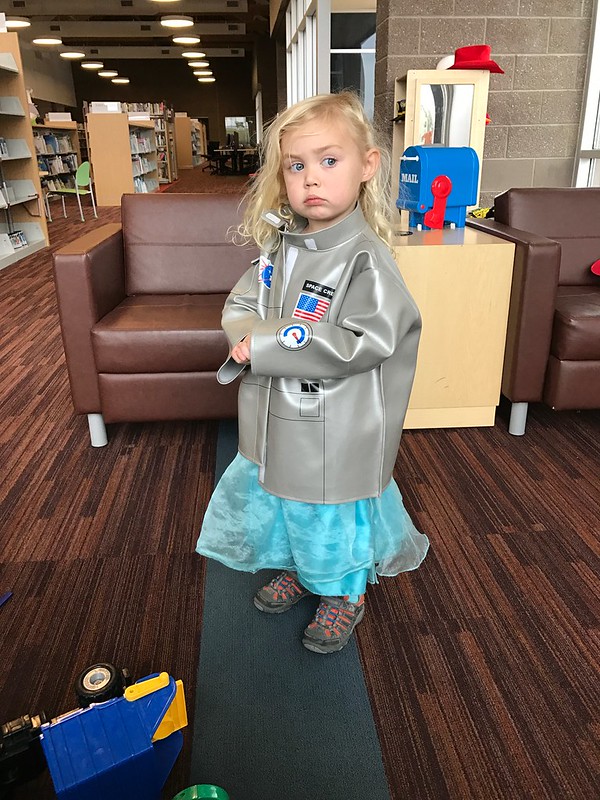 Folks - we did it.  We made it to Cincinnati with 48 hours to spare to see our friends.  They just got the best news in the world - cleared hot to return to their home.  Their little one is...

Despite my best intentions and a lovely picture in my head of hopping around the globe with nothing but backpacks and a sense of adventure, not having a local "home" is rough.  That $%^&# is hard work!  If Thailand taught...

I should have given you a heads up…. we were heading into a long weekend of family time so I knew we’d be MIA on the blog for a little bit.  I'm sorry I forgot to mention it.  Several folks...