Daily Lifeoddpopular1RepairsThe Story of Us

How do you make a tissue dance?  Put a little boogie in it.

These last few days have been a little trying.  We’re running away from cold and colds. 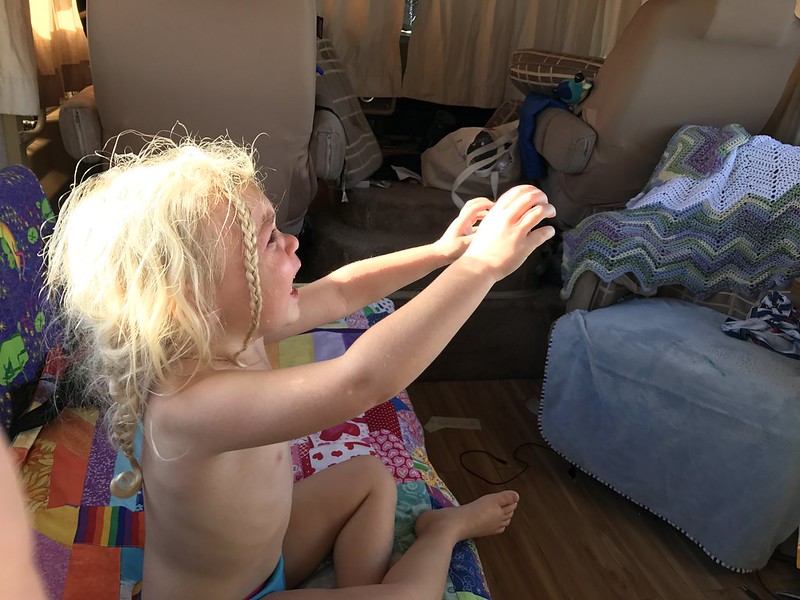 Let’s be clear, the travel lifestyle isn’t always “awesome” and “wonderful”.  I wouldn’t change it for the world… but to keep it real, there are small pockets of total suckage.

Evie developed a slight fever and a runny nose.  She used up all the tissues.  Jack was a day behind her. There weren’t enough BoogieWipes in the world to take care of the mountain of snot I was managing. And why do kids always use their sleeves?  Just, gross.  Jack’s cold included a raspy cough.  When I got one kid down at night, the other woke up… and it went like that all… night… long.

Sometimes I miss being around adults.

As we made our way, we kept a lookout for interesting stops.  There aren’t many in western Texas. I’m not suggesting that Texas isn’t the best, biggest, brightest state.  It’s just that ya’ll have A LOT of land and most of it is either unused or used for something that isn’t immediately obvious.  That makes for a long drive.

In typical Amators form, there was one moment that stood out.

We were cruising down lonely Rt 10.  Just outside of Junction, TX there is a rest area that offers a free dump station and potable water.  Whatever you do, do not use it.  Ever.  Just keep driving.  Pay $10 to dump someplace else.  Trust me.

We had been dry camping for 4 or 5 nights so we were ready for an Unload/Reload.  The rest area seemed like an obvious choice.

We pulled up. I got the water hose out for the potable water.  Scott was setting-up the grey/black hose.  He kicked a thick dry film on the ground.  Disgusted, he said,  “Someone must have cleaned out an animal hauler.  Nice {sarcastic}.”

He started the dumping process.

Everything went fine at for the first second or two… then suddenly the hose bucked and reared up 2ft into the air, a horrible brown volcano erupting from it.

I’m not sure I can describe the series of events that happened next with enough detail to really bring it home…. but I’ll try.

I gasped.  Scott started moving… at first to try to grab the head of the hose to put it back in place.  Realizing that the actual hole in the ground was full (vice a problem with our hose), he switched gears and got back to the Chief to slam the valve shut.  I started out laughing… a deep, startled, highly entertained series of deep gawfaws.  Big mistake.  Huge.  I was sucking in air like a commercial grade vacuum when the wave of putrid poo smell hit…. and she hit hard.  Laughter turned into gagging mid-laugh.  Tears were streaming out of me.  My snot was 10x worse than the kids and you can be damn sure… I used my sleeve to wipe it away.  Scott,wide-eyed and with sincere urgency, “Hose me down.  Damn it!  Hose me down!!”  I couldn’t move.  I still laugh thinking about it.

Thankfully, after a moment to take stock, it turned out Scott didn’t actually have any poo on him.  The black tank hose did.  The ground did.  The Chief did.  But Scott was fine.

As the muck very slowly drained away while we were cleaning up, Scott’s first words to me were measured, “Well, I guess we know what that film was now, don’t we?  We’re going to have to find another place to dump.”  Indeed.

As soon as Scott left, pretty much everything broke.  That shouldn't come as a surprise, right?!  It gives me something to talk about.  #TurningLemonsIntoLemonade I'm not a handy person.  That's ok.  I do my best when it's necessary and I'm...