If it seems like the posts have dramatically slowed…. it does to me too.  Here’s the deal.  I’m doing everything I can to hold it all together.  Kids, driving, fixing the RV, visiting, touring, dog, eating….  By the time evening rolls around (when I do most of the writing) I’m already drooling on myself and half asleep before I’ve even made my bed.  For being on what is essentially  an extended vacation and not having a schedule…. we sure are busy.  Being the Captain and Mom is tough. 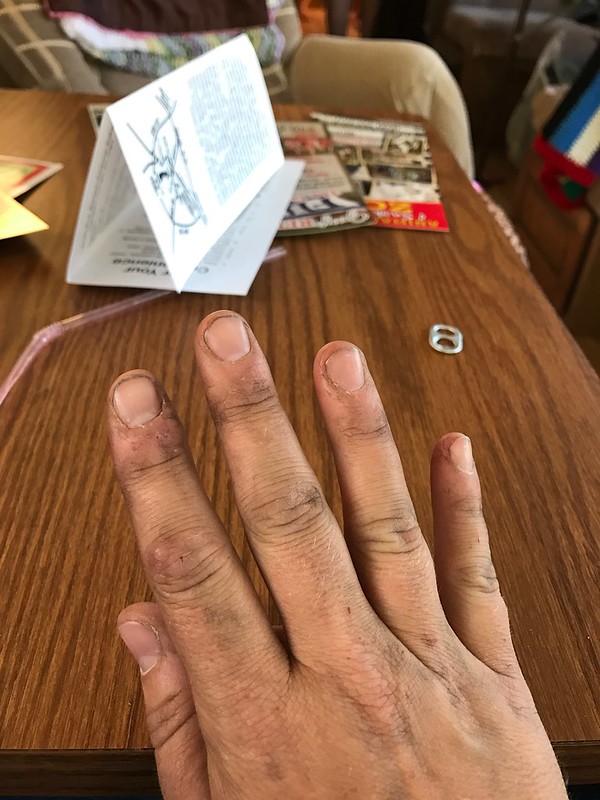 The updates will continue… they’re just going to cover a little more ground and maybe sound a little more tired until Scott comes back.

We were in San Antonio for 5 nights.  I picked a place in New Brunfels, TX.  Not expecting much, I was thoroughly entertained to discover that we found a little unknown-to-us gem.  If you’re looking for a really fun time, check out this town/city outside of San Antonio.  You’re 35-40 minutes to the Alamo and your’e in the middle of Munich.  Wrap your head around that.

According to local lore, New Brunfels is where the U.S. detained (possibly the wrong word… too PC?!) German soldiers during WW2.  The houses look German, the bakeries are definitively German, there are German words on signs.  The only thing missing were a bunch of those busty blonde ladies carrying 1000 beers (and I’m in sure if I had looked in the beirgartens I would have found some).

On top of all the good eating, there’s a natural river that’s been turned into a recreation area.  Tubing is a full-time sport.  The dam even has a tube chute challenging enough so that it was decided early that the kids wouldn’t be going down it.  It was everything any tv show has ever led you to believe about Texas.

We parked under the railroad tracks at Landa RV.  Every 30-60 minutes we were treated to a train going by.  That might not sound ideal, but to a little boy who loves anything that moves, it was a super highlight.

When we were checking out the river, still in clothes not bathing suits, the kids were playing on the last step of a cement stairway into the water.  Beyond the last step was about 5 feet of water and weeds and… the great river unknown.  Mom didn’t think that was funny the kids were sitting down there (playing happily, I might add) so she went down to stand beside them.  I turned briefly and heard, “Uh  Uh Uhhhhhh” and turned back around to see spread eagle, arms flapping Grandmom in the plank position at a 45 degree angle with a look of total and complete shock on her face.  She was past the point of no return so I didn’t try to help.  I just laughed and laughed.  She literally went ass over tea kettle.  Not too bad for pushing 67 (not until August, she wants me to note).  She doesn’t like river weeds.

We did rent some tubes.  Big mistake.  The current didn’t look strong, but it was.  I had Jack with me.  I thought it would be easy to handle him and the tube.  Incorrect assumption.  He got tired of holding himself up.  I had to use one hand to hold him.  Out situation degraded.  He knew we were in trouble and I knew we were in a tough spot.  The water wasn’t that deep so I could have stood up… but those dang weeds, man!!  I did a one-armed swim sprint that would’ve made Michael Phelps proud.  We reached the edge, I threw the tube on the ground and declared myself ‘all good with tubing for the rest of the day’. 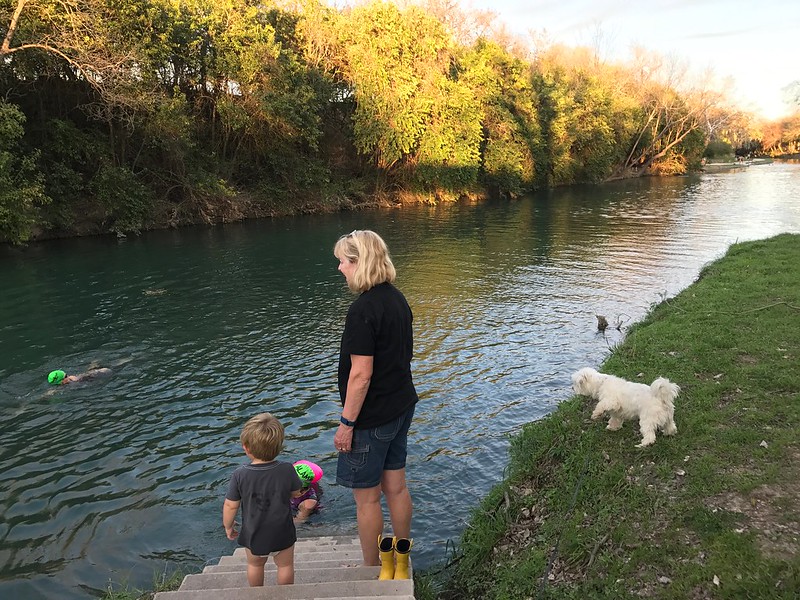 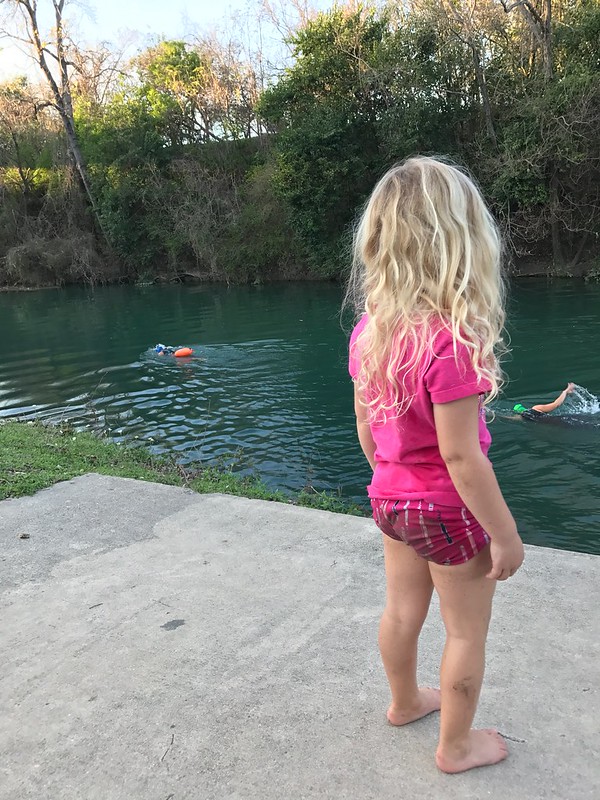 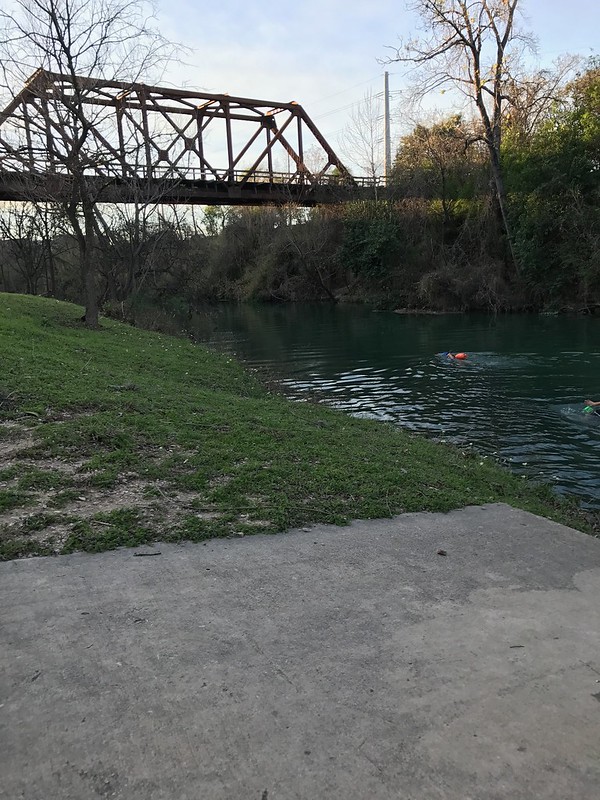 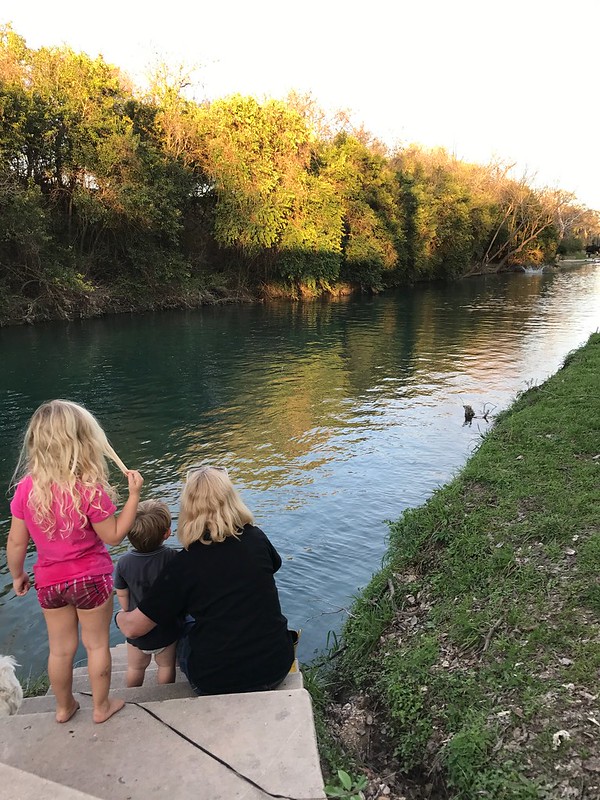 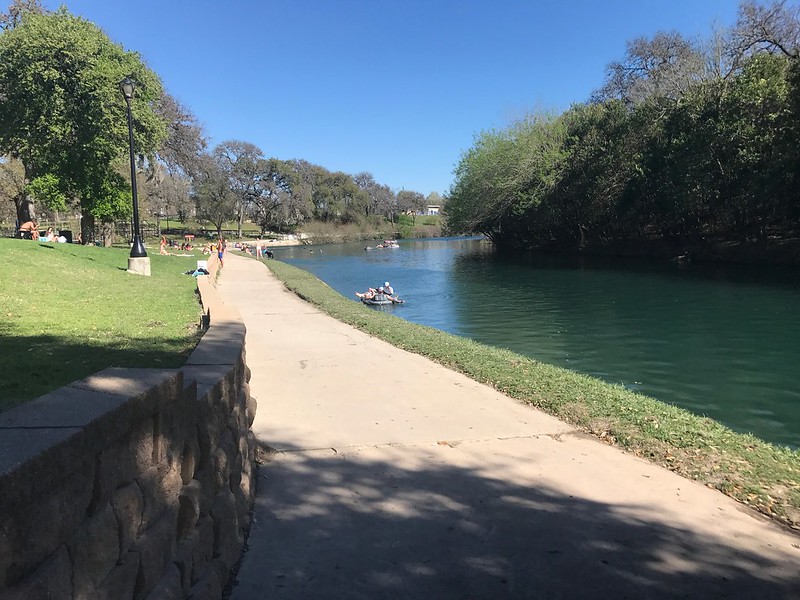 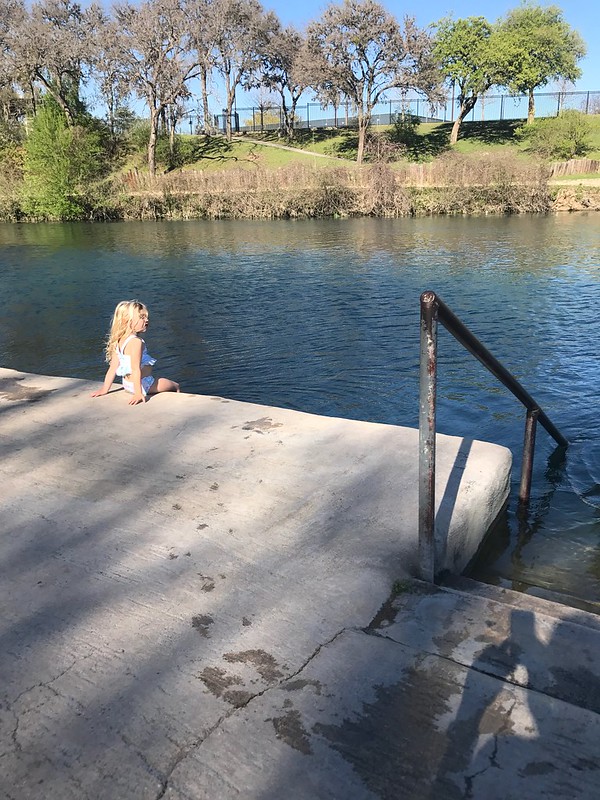 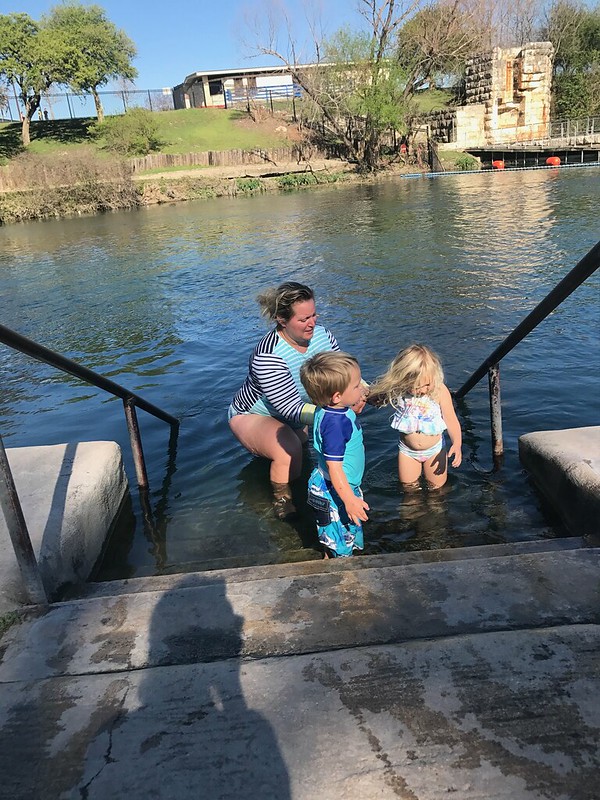 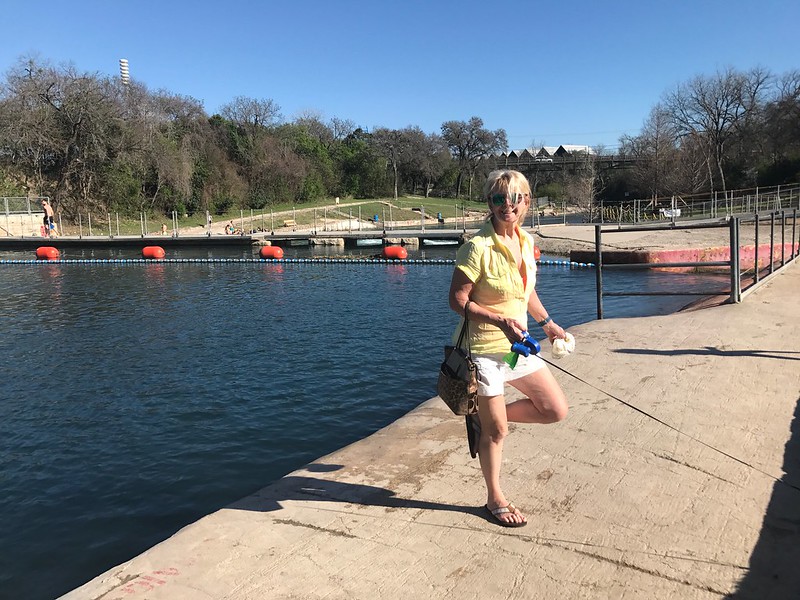 The city made tube chute at the dam: 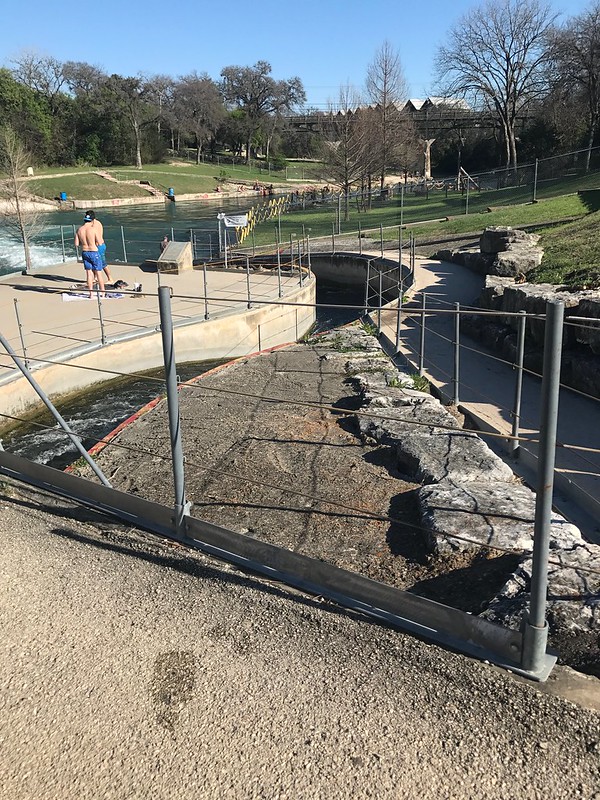 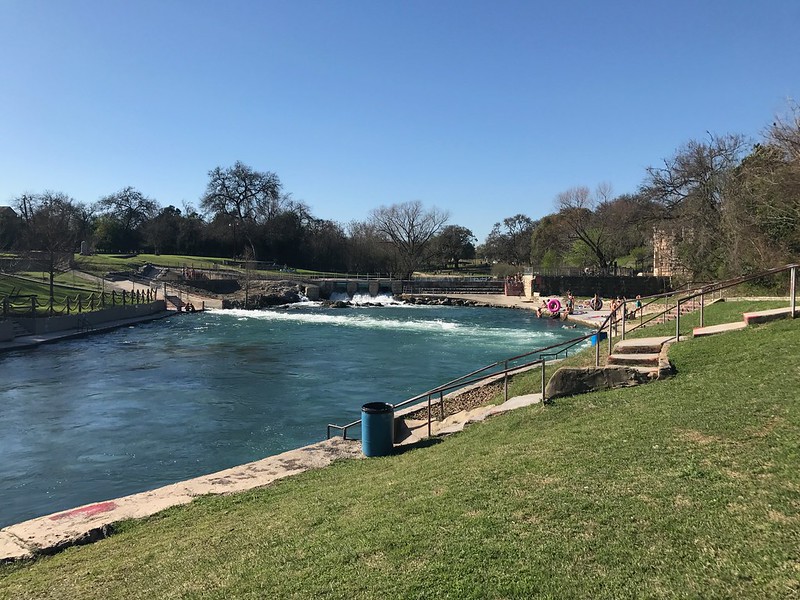 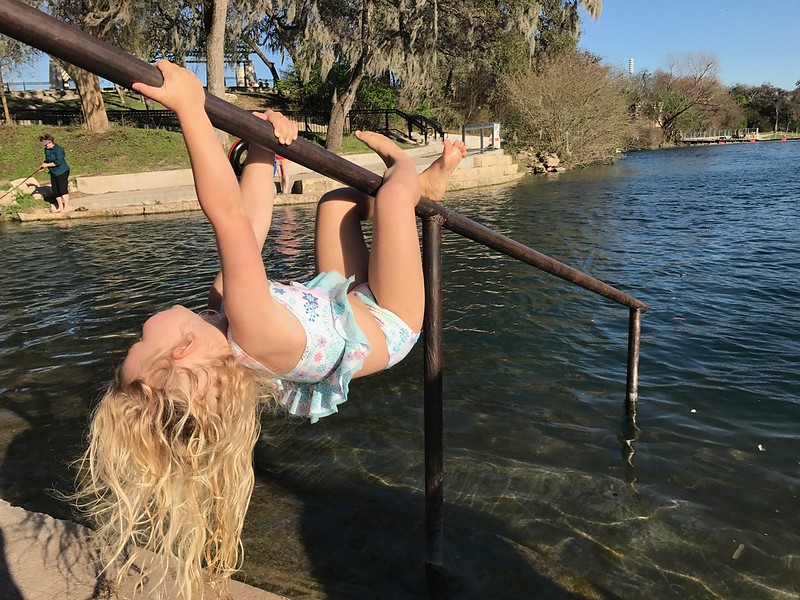 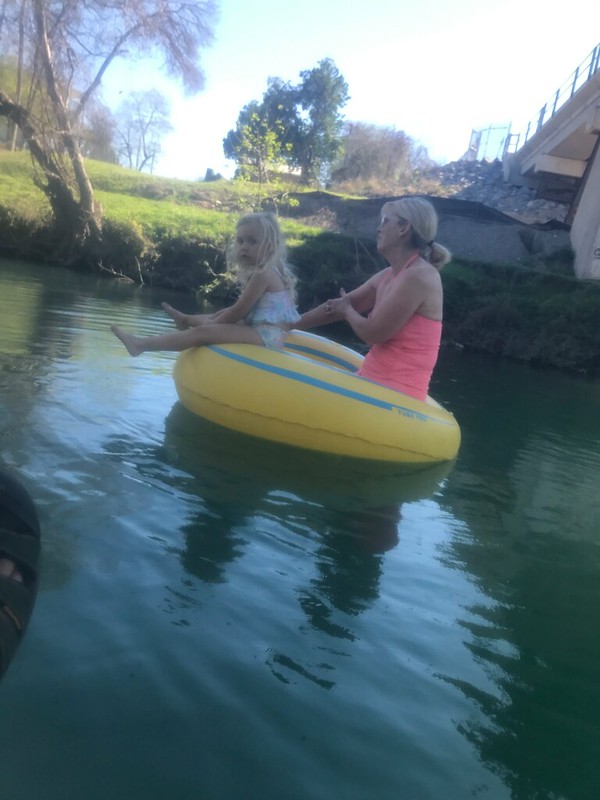 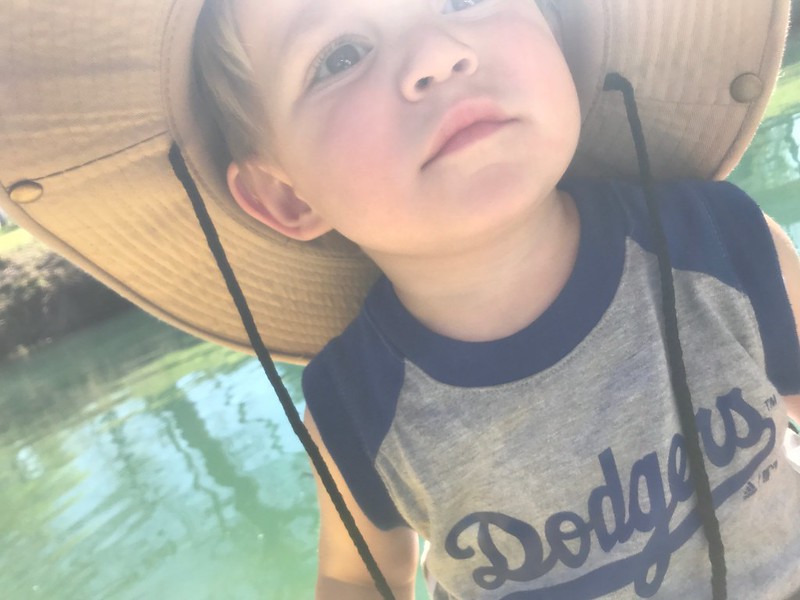 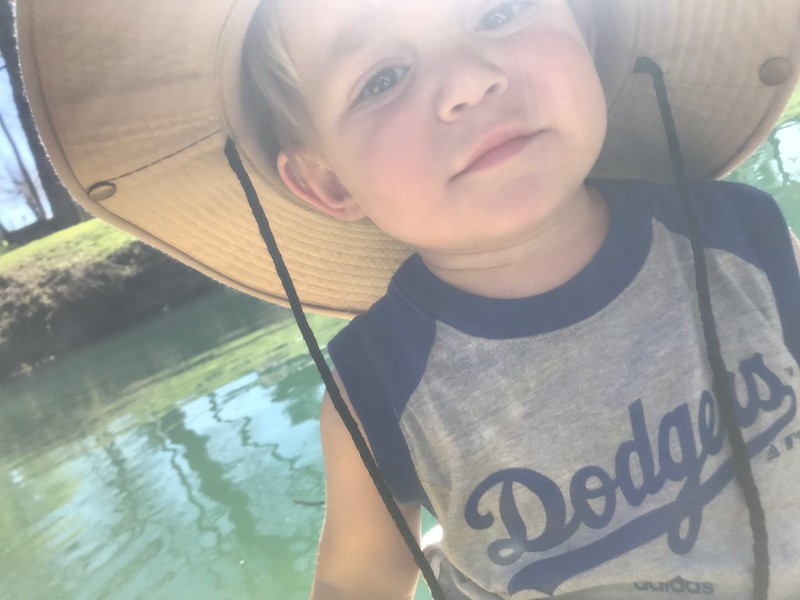 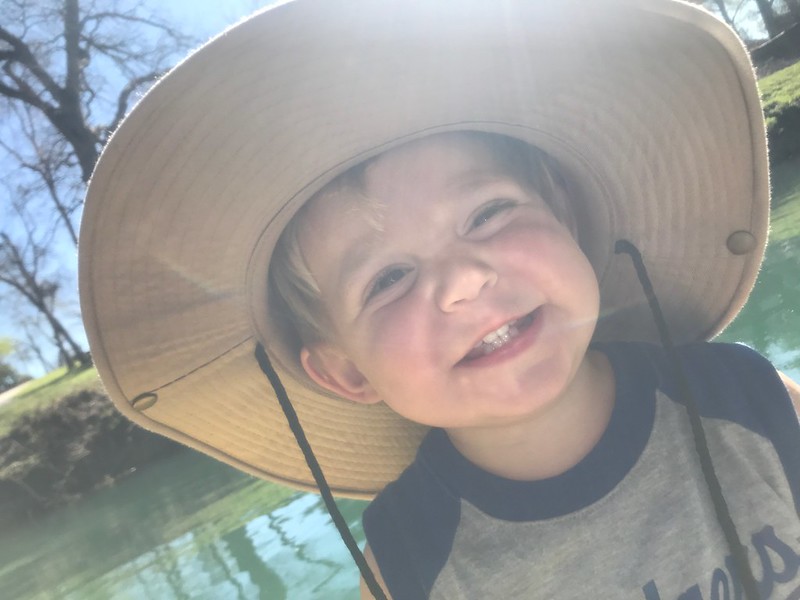 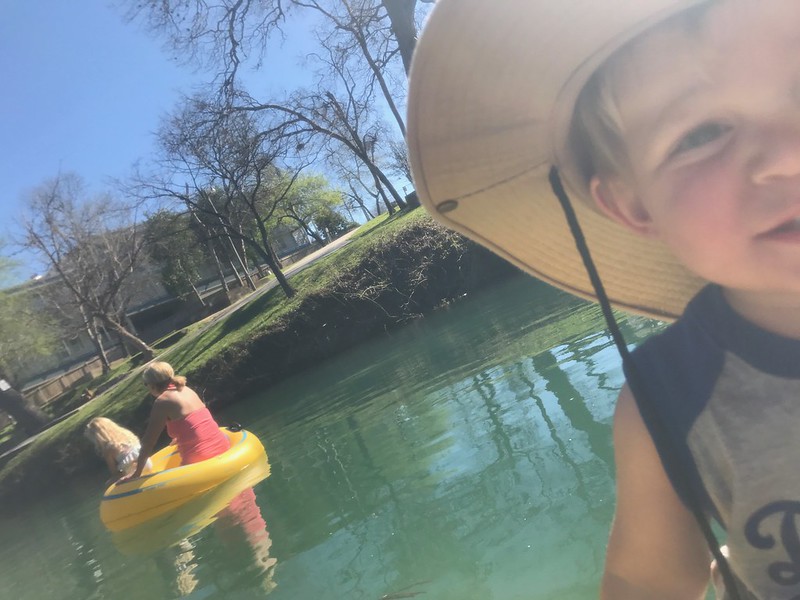 We also went into San Antonio – first to the Mexican market and then to the River Walk.  While I’m generally game for anything and love nothing more than a good surprise, I wasn’t entirely happy to find out that we were on the River Walk for Mardi Gras.  That was a bridge too far for this exhausted mom.  Don’t get me wrong.  I’m not a Debbie Downer for Mardi Gras.  But that tends to be an adult celebration in the US and the kids just don’t need to see anyone “earning” any beads, right?!  Plus… more people.  That’s a pass for me.  Evie liked the feathers though.  Also, I’m ready to move to Mexico.  Fantastic food, outstanding music, colors, warm climate.  I miss living in Latin America. 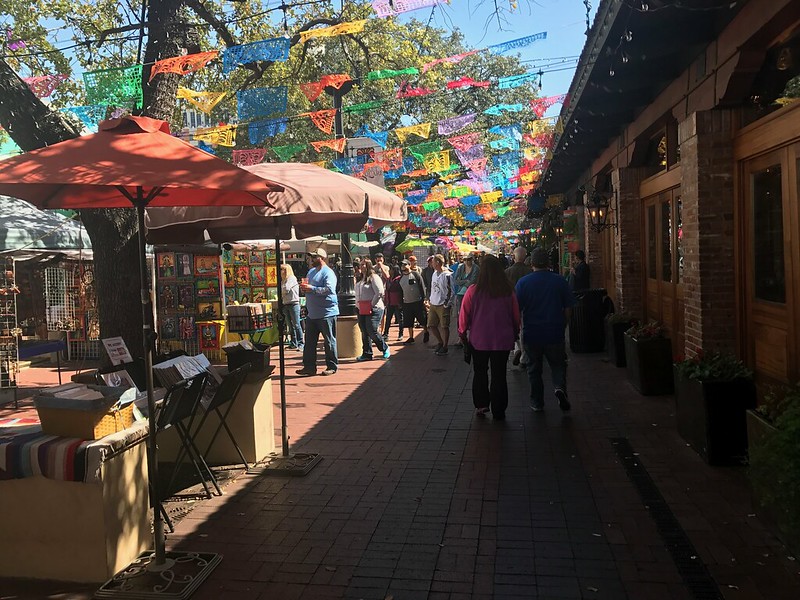 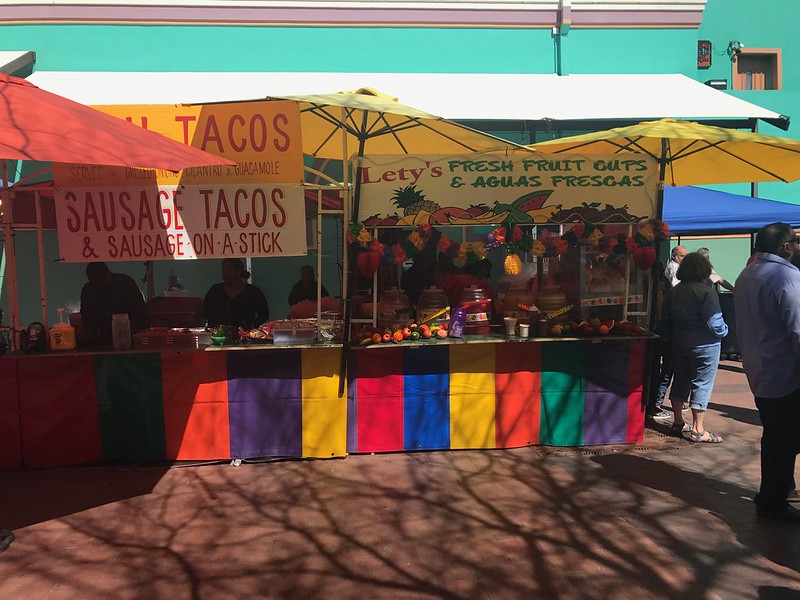 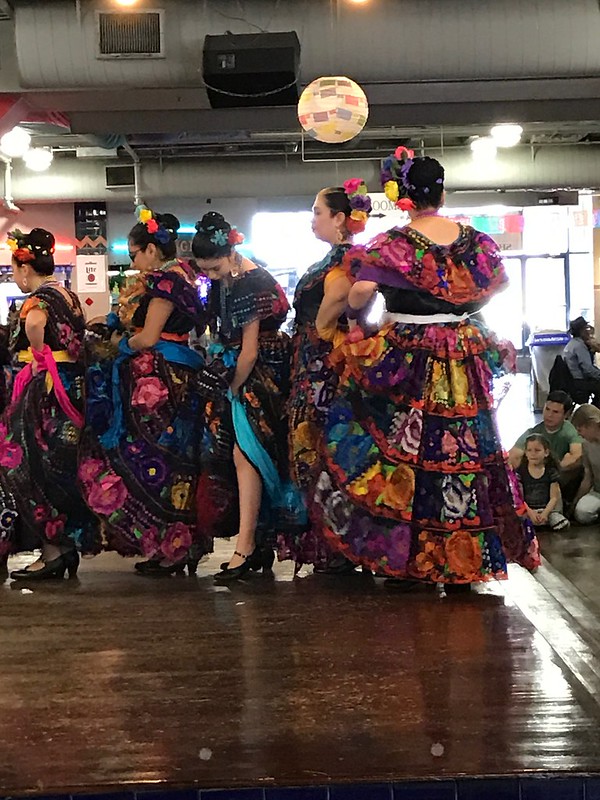 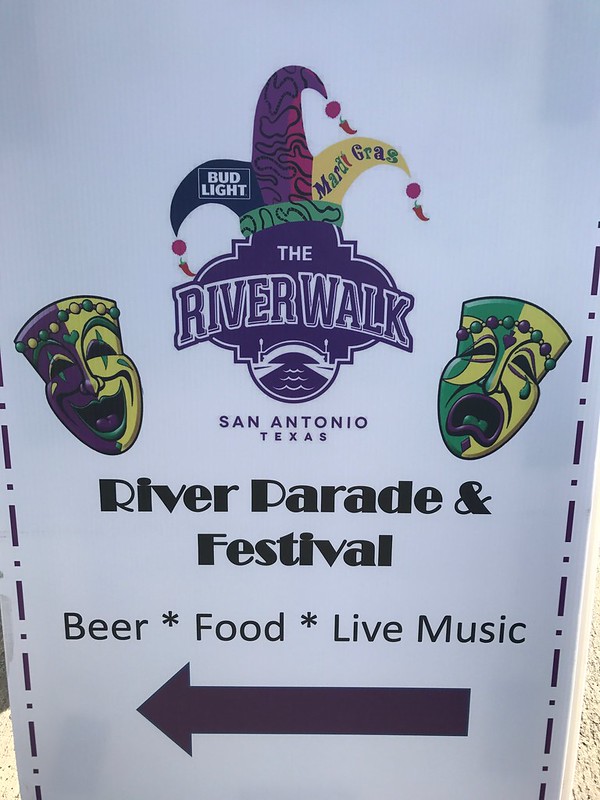 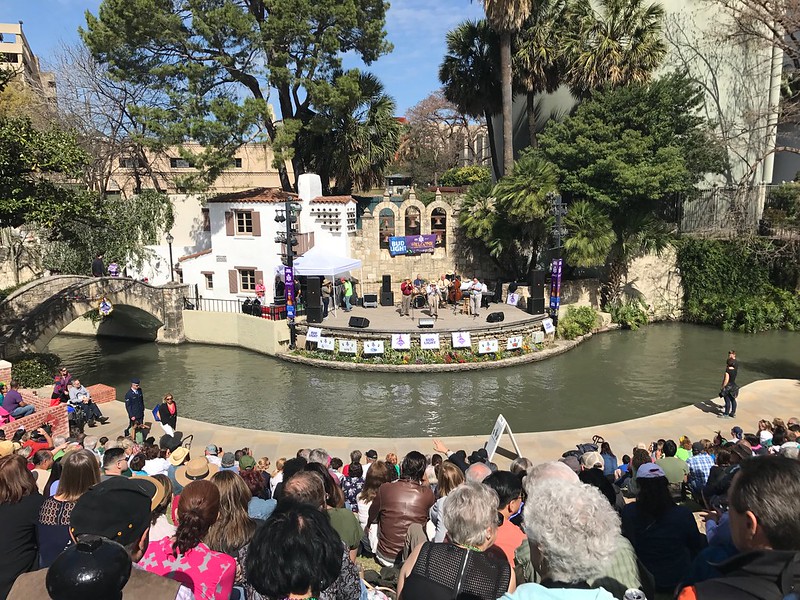 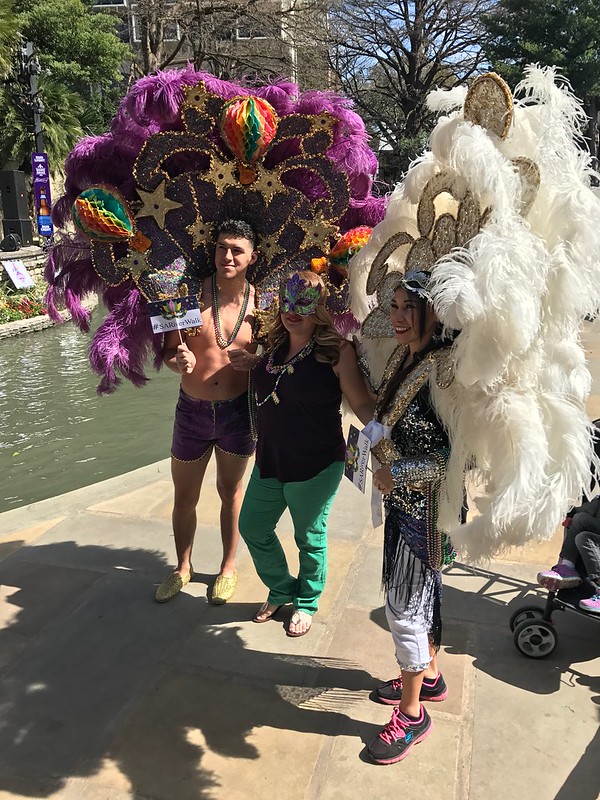 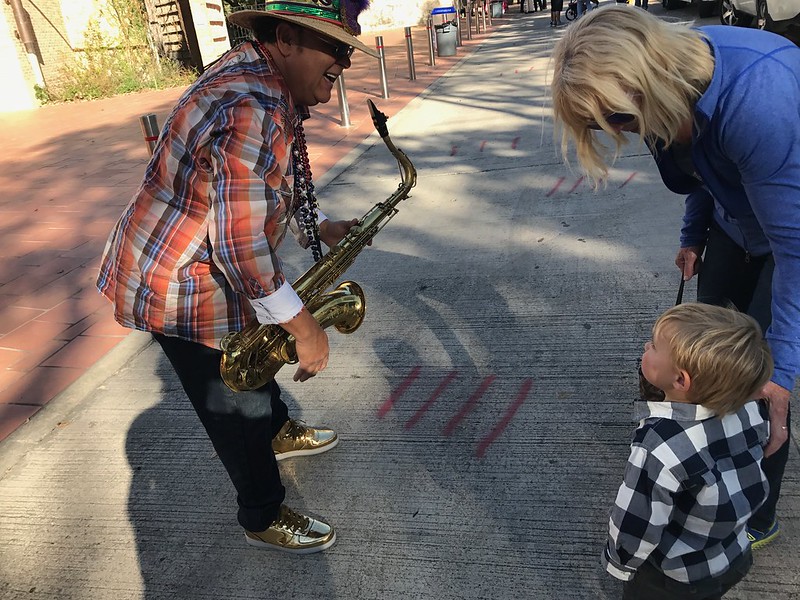 The Beginning Getting used to living in an RV has been far from seamless, but the kids are finally starting to develop a routine. From the routine, they are starting to feel normal. Normal comes just before safe and happy...