Not every day on the road is pretty.   But I don’t want to forget any of it – not even that part.

Jack seems to be over his issues.  He suddenly has a mouth full of teeth with more on the way.  He went from the 4 he’s had forever to 8 or 9 and he’s still drooling.  He is not a happy camper and, unfortunately for him, I don’t like drugs (legal or illegal).  We all get to suffer together.

Scott now claims to feel ‘fine’.  He was so ‘fine’ that at 7 pm last night he came into the camper, said he was ‘fine’ and I turned around to get something off the stove only to turn back around and find him in the fetal position on the couch.

My idea of ‘fine’ is somewhat closer to “good”, “normal” or even “average”.   It is my contrary opinion that he is not yet ‘fine’.

I’m on my way to ‘fine’.  I haven’t eaten much more than saltines and ginger ale for 72 hours, but that’s ok.  My energy is up, I’m drinking coffee without issue this morning (which means no raging caffeine headache later in the day!) and I’m capable of keeping up with the kids.

Boston…. now he’s having a truly bad day.  It’s his turn.  So far he’s had diarrhea all over the driver-side floor (carpet), thrown up in the same spot, crapped again near the main door and crap/peed (it’s unclear what exactly was going on) on the floor in front of the couch.  He’s shivering noticeably.  I’m not sure if he’s suffering from the same thing that brought us to our knees (apparently there are 2 kinds of bacteria that is capable of making the leap from humans to dogs) OR I caught him eating something at the sand dunes.  He doesn’t do well with consuming mystery substances.  He’s cute but he’s not smart.

I’m also Clorox’ing everything and dealing with sitting in a tin can that smells like bad body fluids.

I’ve made Evie so paranoid about washing her hands she does it on her own every hour or so… just because.  They need long deep baths, but we’re more than a week away from that happening.  For now, short showers will have to do.

Did I mention ants mysteriously showed up in force this morning underneath the dinette table? That’s fun.  Evie doesn’t want to kill them, “… their mommy would be sad…”  I’d be willing to lay down Vegas money that ants don’t have the range of emotions she’s assigning to them… but now I have to kill them surreptitiously.  Add Ant Assassin to my portfolio. 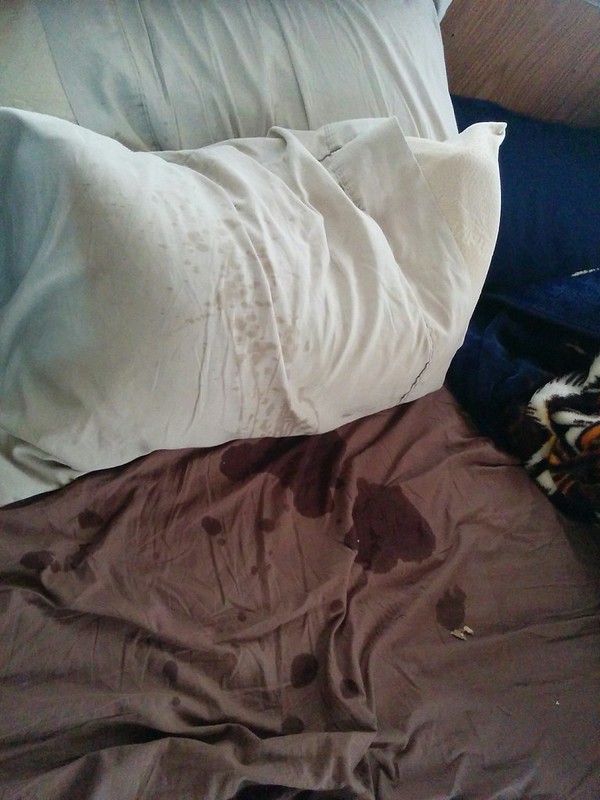 See Christy, sometimes… not often, very rarely… he actually can be a little bit of an asshole.  I stand by my assessment.  I suspect it will serve him well when he’s older.  Chicks dig bad boys.  In the meantime…

It’s a good thing he is also the sweetest little soul who likes to give big hugs and kisses.  Otherwise he’d be in big trouble.

I’m doing my best to wrap up before we hit the road and…. I couldn’t make this up…..  Scott just said, “I found out why the RV still smells like poop.  Boston **** all over your side of the floor up front too.”

Third time is a charm.  Once again, I deployed the Clorox bomb.  After that, I went over everything with vinegar for good measure.  I hope those 2 things don’t mix like Clorox and ammonia… but with the way my day has gone, it’s possible.

Like any normal person with half a brain, today I would rather be in a warm home in front of a tv wrapped up in blankets on a couch with a cup of tea (Wild Turkey buried deep in a large glass of Coke) and plenty of toys to keep the kids entertained.  Instead, we’re chilly, it’s drafty, there is no tv (something we normally enjoy but right now I think it’s really really stupid) and we’re fighting a losing battle against some unseeable warrior germs that have turned the Chief into a mobile biohazard.  Welcome to the rough side of adventure.

We started off strong in Kentucky.  Over the last few days my balloon started losing air for it.  You guys know I'm fickle... it's not a trait I'm proud to highlight but I don't deny it either.  I'm prone to extreme feelings...

It was all funny until it wasn't.  I'm hardly an expert but these matters but it was fairly obvious these folks weren't high on life.  Scott specifically asked me to shelf the D.A.R.E speech for the foreseeable future.  When I...

Since I'm infamous for my total lack of planning, it should come as no surprise that sometimes things don't work out exactly as expected. That's the fun part. Glacier Park is famous for a few things - Going to the...