Bonneville, UT.  Ring any bells?  When Scott first mentioned the town, I thought he was referring to an old grandma car (and even that was a stretch because I don’t pay attention to cars).  Turns out, I wasn’t completely off base.  It has to do with cars.

Leaving Zion we had a choice – north to Rt 80 and over the Sierra Nevadas or continue south on Rt 15 to Vegas.  Eventually we’re heading to San Fran.  Both routes could work.  The Vegas route seemed easier.  Taking rt 80 had the bonus of a drive by of the Bonneville Salt Flats.  Scott sighed a little and dug out the YouTube videos of dudes driving cars 700+ MPH across a desolate lunar landscape.  Sold.

The speedway is a 10 mile straight track used to earn land speed records.  That’s the famous part. There’s also an oval track, presumably for car races?!  It’s located on salt flats nestled up to a wall of mountains on the western side of the sometimes lake.  Why don’t they put the strip farther away from the mountains?  It’s a mystery to me.  Unfortunately, we had every intention of driving the Chief out to the marked mile to see what she had in her but, unfortunately, September was the last of the races and the mile is now under about a foot of water.  Evie enjoyed splashing around a little bit but not on the track itself (that’s not polite).  It’s saltier than the ocean – something closer to the Dead Sea but without the oily feel (although I didn’t really do more dip my fingers into it). 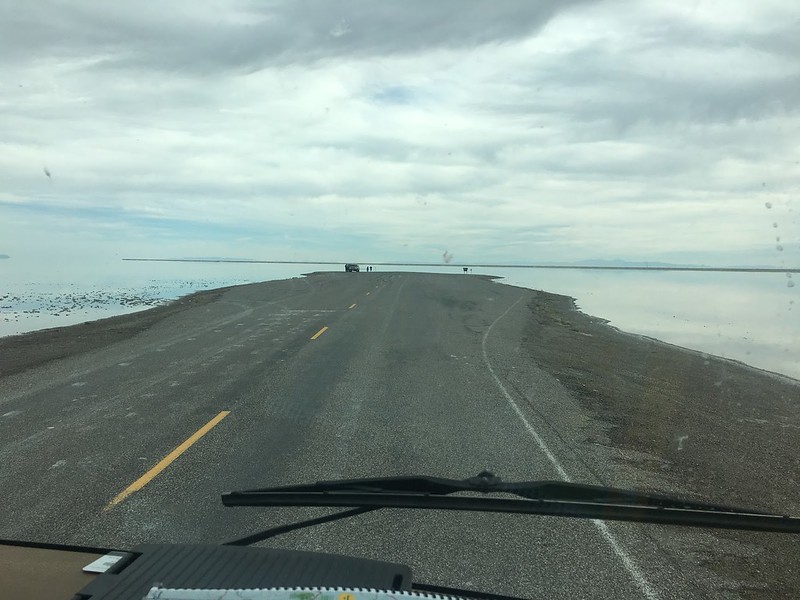 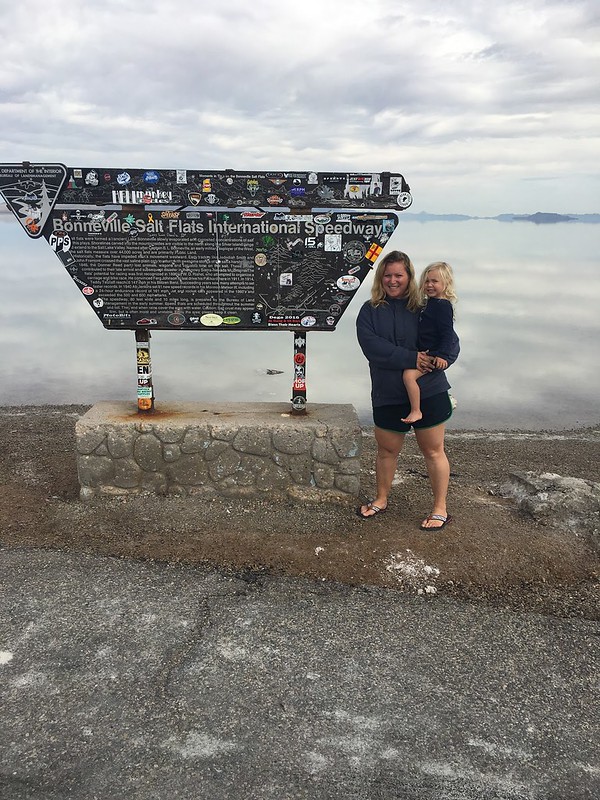 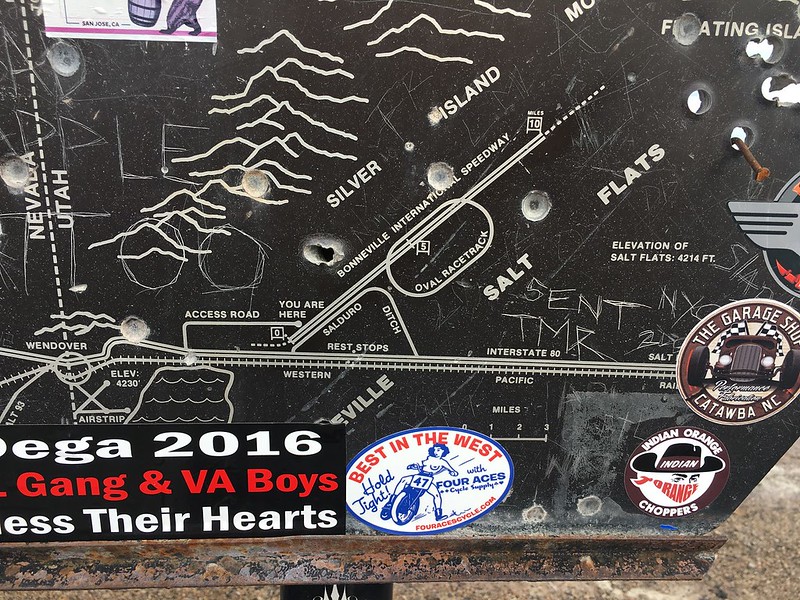 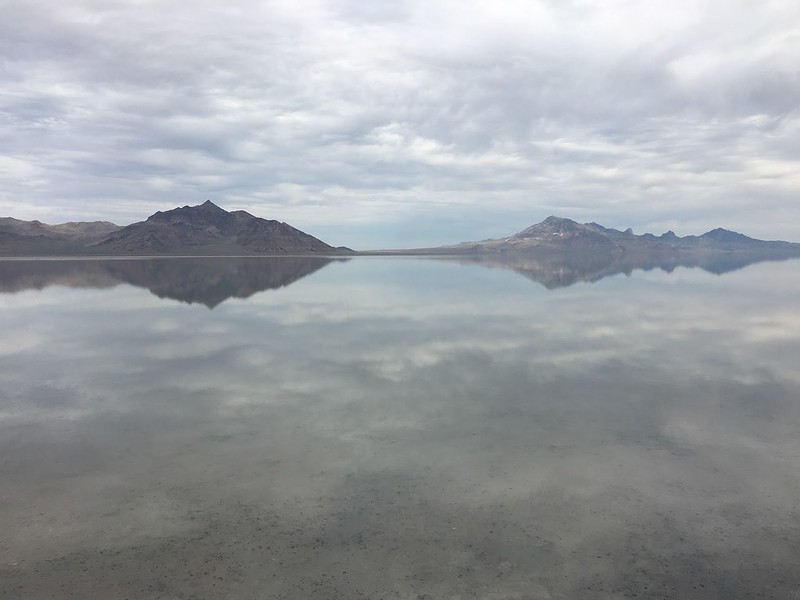 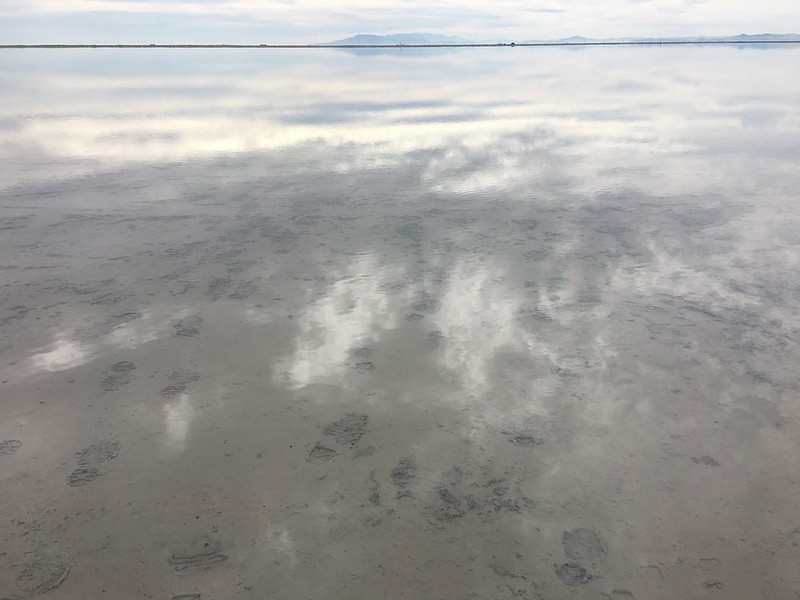 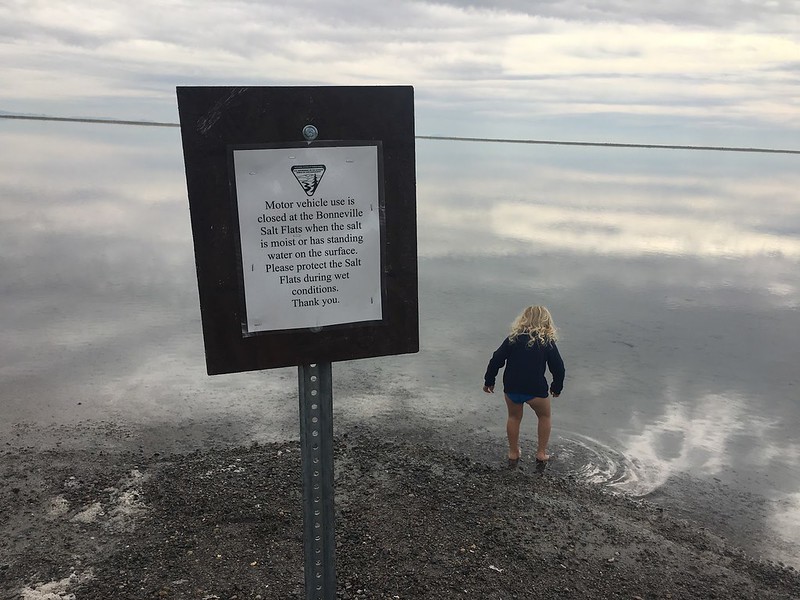 I’ve mentioned that Utah is quirky.  I stand by that statement although I understand that a lot of (*cough* older) folks (even you, Scott) remember something called ‘Blue Laws’ so my example of the grocery closed on Sunday wasn’t all that shocking.  I still think it’s nuts, but I’ll do you one better.  Just off of the speedway, in the flats, there is 1 gas station.  This gas station has an attached restaurant.  It’s a little Mexican joint.  Inside was a full 10 person tuba/trombone band playing distinctly German oompah music.  That’s what Utah is to me – a quirky bastard.  No other way to describe it.  I like it. 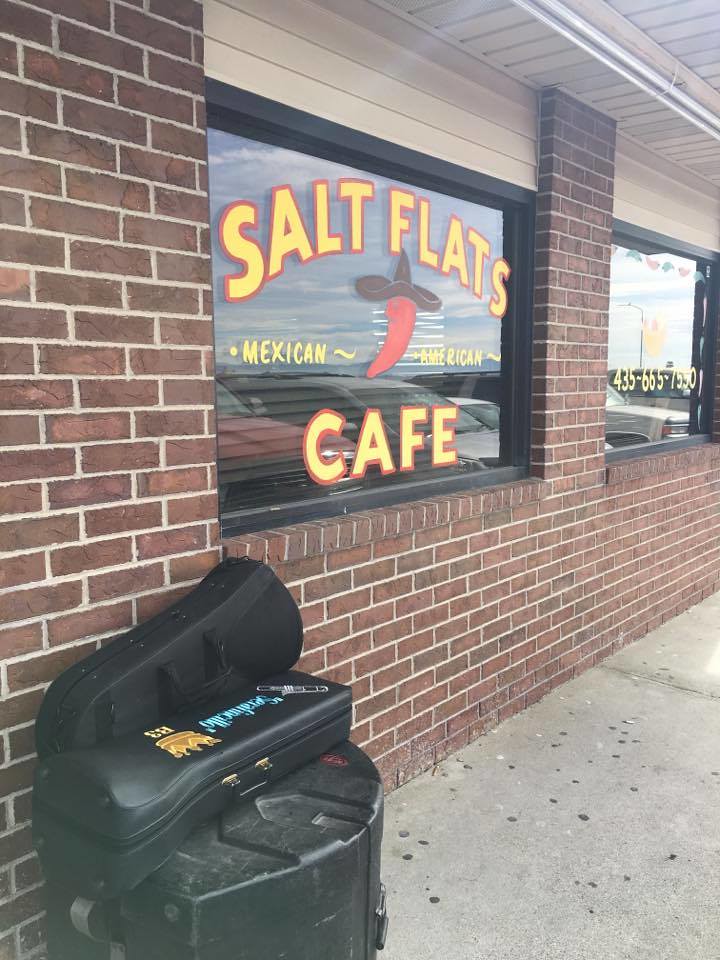 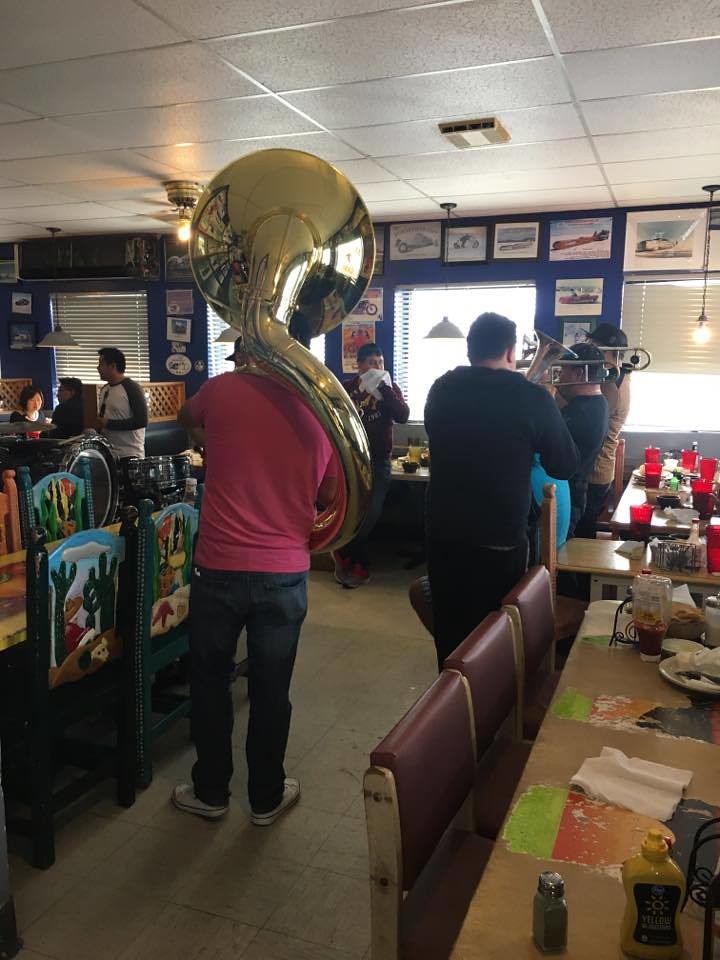 There were signs for a visitor center in Wells, NV so I made Scott stop.  GIANT eye roll but he complied under duress.  He made me go in by myself to shorten the stop.  Jack was asleep anyway and Evie was happier watching an oversized truck pull a house down the road.  Inside I got pamphlets for some interesting things in Northern Nevada.  For example, I had no idea there was a national park up here.  It’s called Great Basin.  We won’t be visiting it but I feel like I should have known it was here.  I also found out that rt 80 is the old California Trail.  That meant nothing to me (did I not pay attention in high school history?  What is wrong with me?!) but I assumed it had something to do with the famous Oregon Trail.  As far as I can tell, it’s pretty much the same thing except the former is really a group of trails and heads south, the latter has 1 distinct trail that breaks north.  Between 1841 and 1869 more than a quarter of a million people set off on this sucker in covered wagons.  Kindred spirits – every one of them (but still no to Evie’s request – many of them died – pass).

Sitting in the car, heading into town the other day, out of the blue Mom says to me, "You can use me as your foil... if you want to."  Having not personally visited the 1920s, it took me a minute...

It’s Going To Be Fine

I dropped off Scott at the airport and took a deep breath.  I did some of that Oprah motivational talking to myself. For the first time, I became Captain Traci. “You can do this.  It’s going to be fine.” By noon, we...