I’m so spoiled with the BLM land I have a hard time coming back to the Land of Rules (LoR).  This campground has 5 PAGES of rules.  Don’t believe me?!  Here: 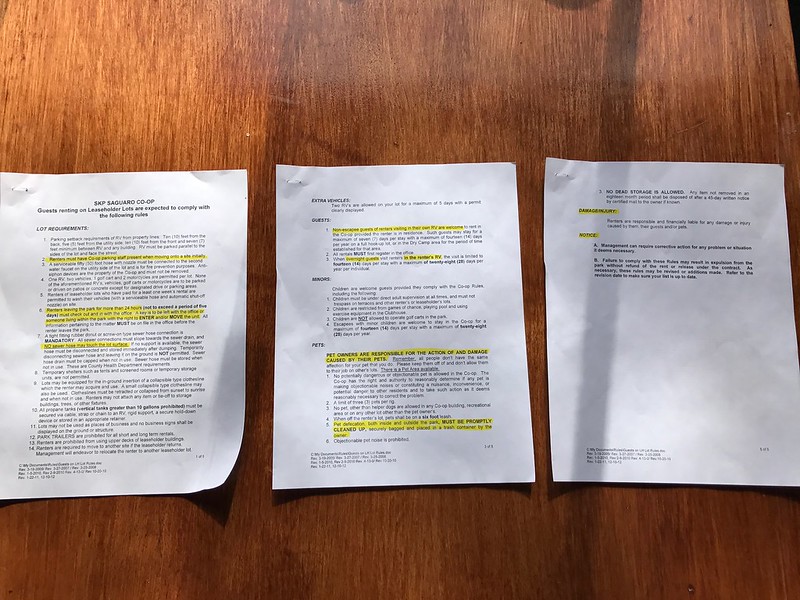 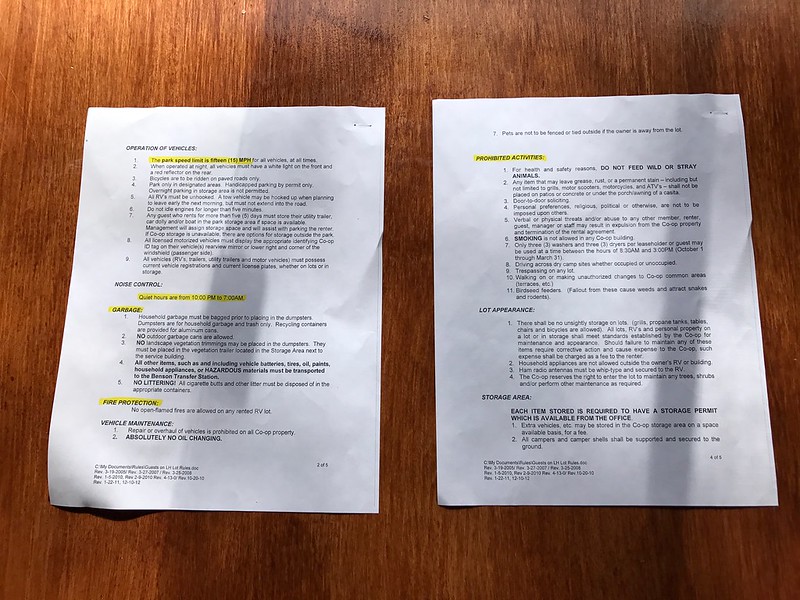 I get it.  Common sense is no longer common.  But come on.  As a serious type A, I am forced to actually read all of the rules so that I can defend myself if ever unfairly accused.  Yes, the goodie-2-shoes runs deep.  This was a serious waste of my time.  To add insult to injury, they don’t want to print out a bunch of copies so we were asked to drop ours off as we’re departing.  Ok, Americans…

Apart from my cheap shots, it was a nice, friendly, welcoming place to clean up.  It was also a great place for a first Big Girl Bike Ride!!  The “shipping department” finally came through!  Here it is – the shiny new red bicycle with training wheels from Santa.  {Bullet dodged!} 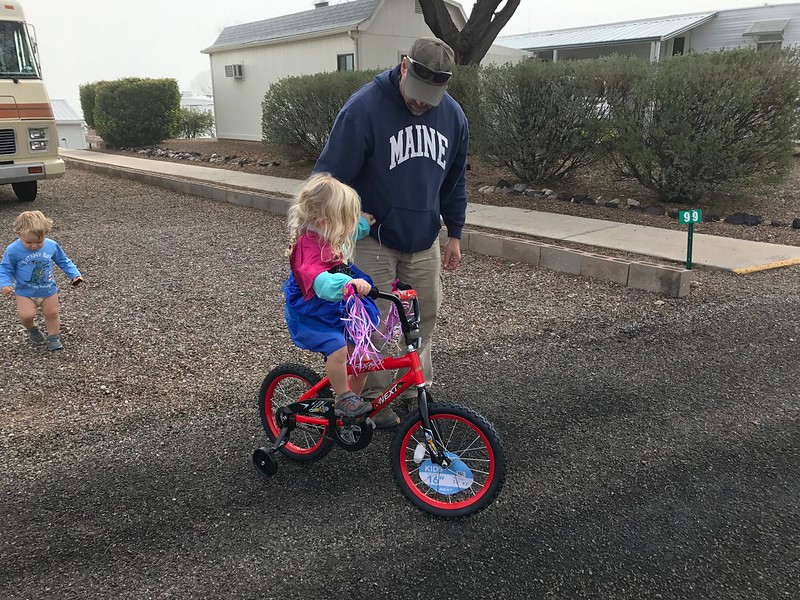 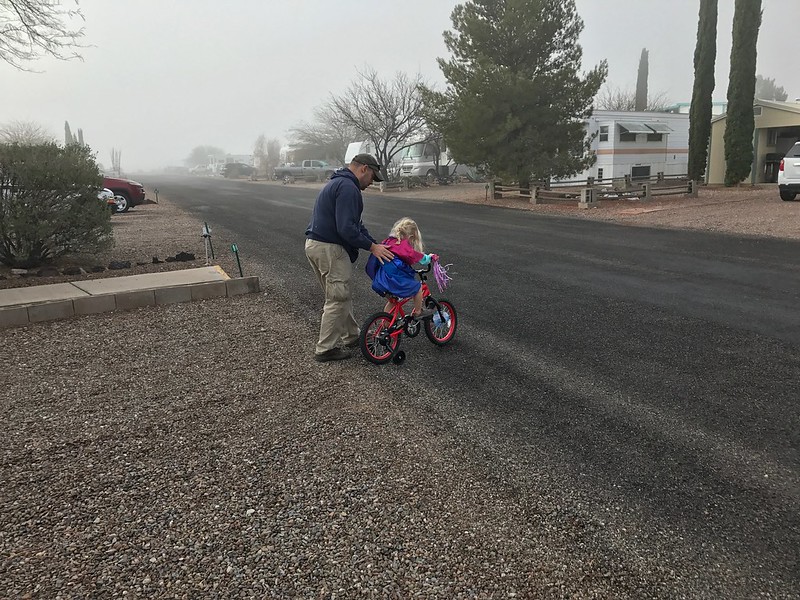 We are on the road again and it feels so good.  As if we needed a sign (we didn’t), the sky lit up in a brilliant rainbow.  We see them regularly now which is really nice.  I love a good arcoiris. 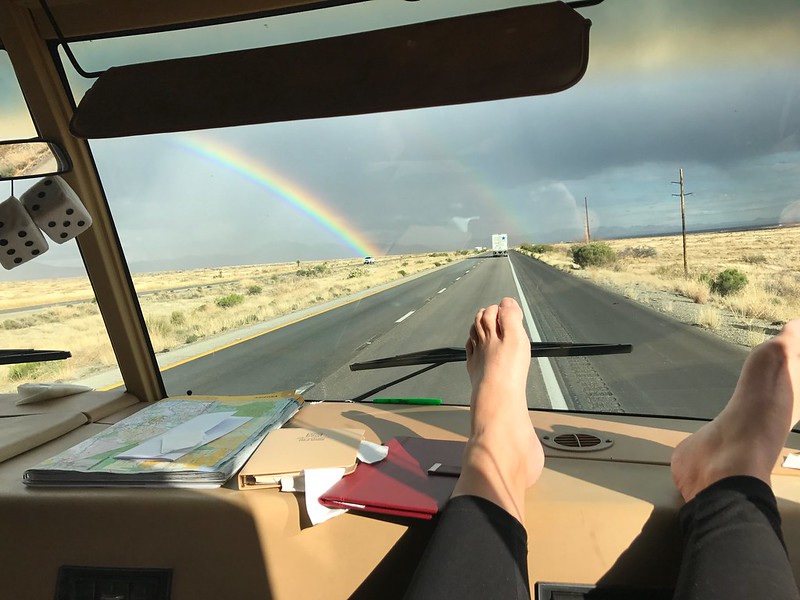 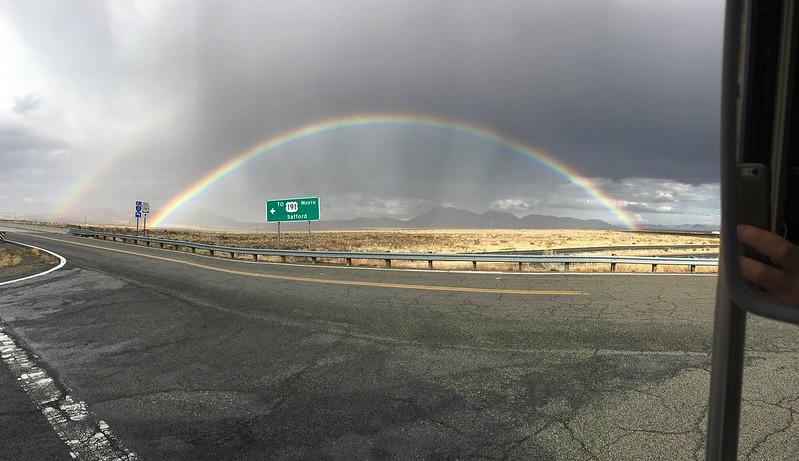 We planned to be in NM already, but I found a cherry BLM spot that we just couldn’t pass up.   This is what it looked like as we came around a corner.  See the spot that’s glowing in the golden, after-the-rain-shower, brilliant sunshine?  Yeah, that is literally the BLM spot.  If you ever find yourself in Bowie, NM…. go here:  GPS: 32.2386, -109.5001 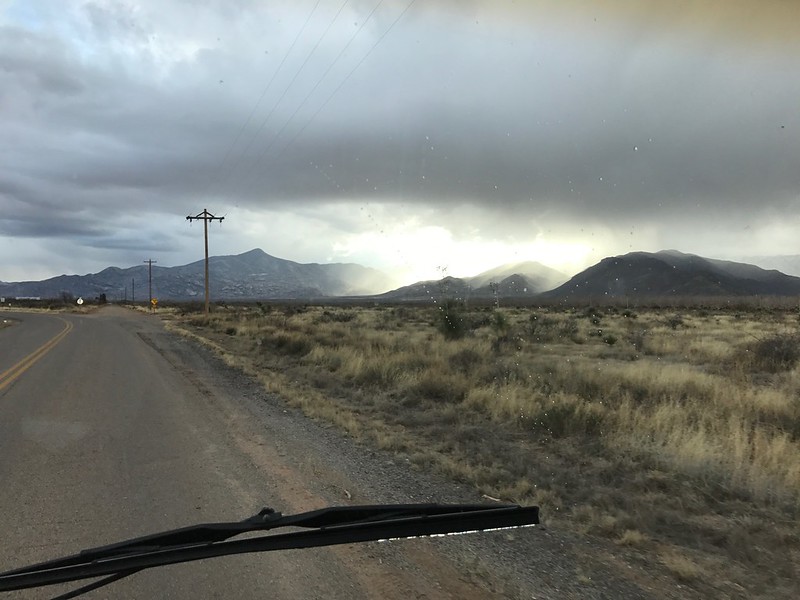 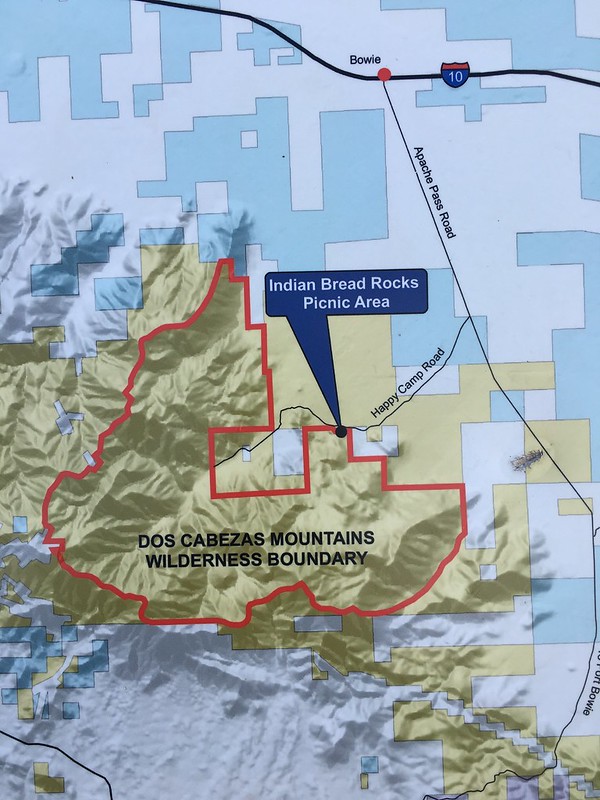 The kids are enjoying the rock scrambles just outside the RV door and Scott woke up before dawn to hike to a outcrop to watch the sunrise.  Thankfully, I had to stay behind “to be with the kids” (read: sleep…. I have no desire to see the sun come up – it looks almost exactly like it does when it goes down).  The coyotes chattering around the RV all night only helped deepen my conviction not to leave it until the sun was well established in the sky.  I told Scott they were saying, “When this dude slips and hits his head, that’s when we eat him.” 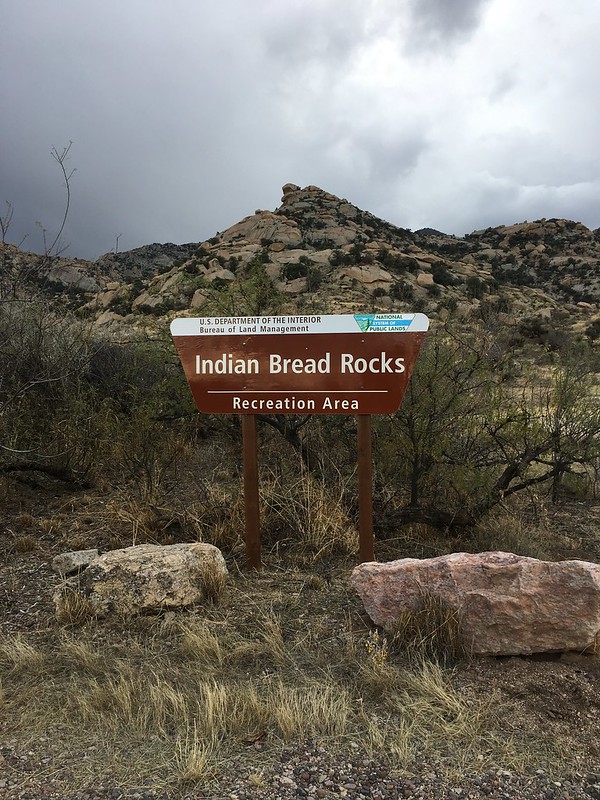 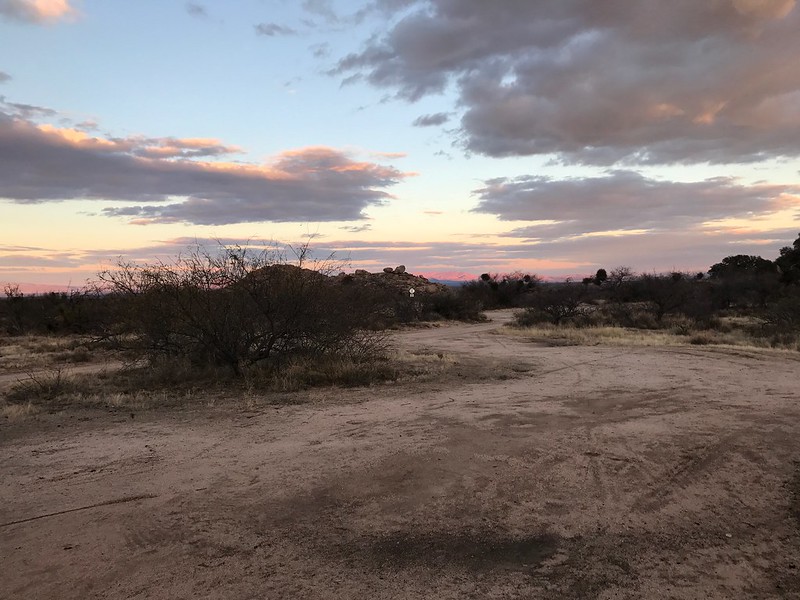 Challenge:  Is it sunrise or sunset?!  You can’t tell.  I rest my case. 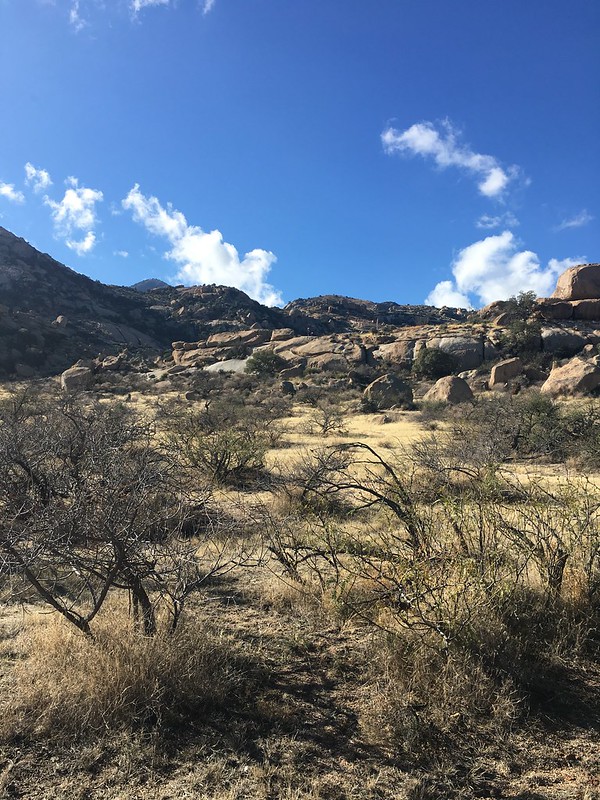 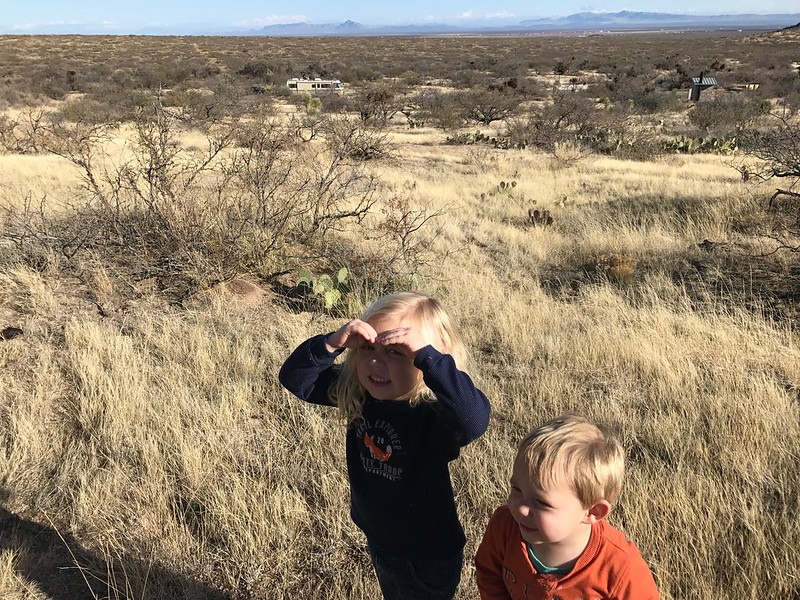 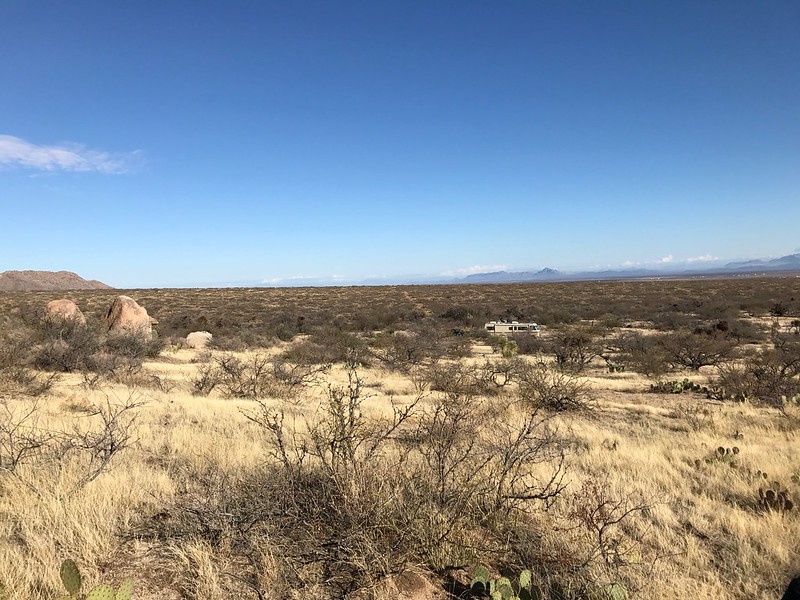 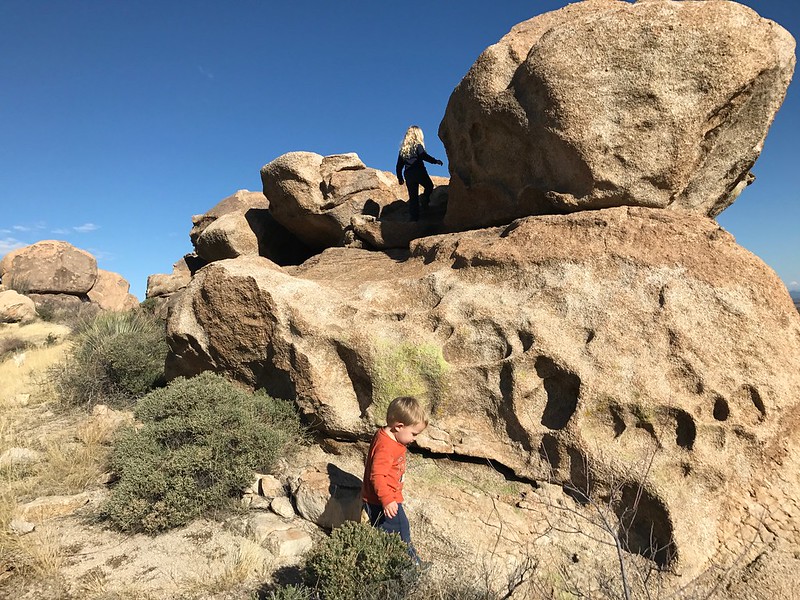 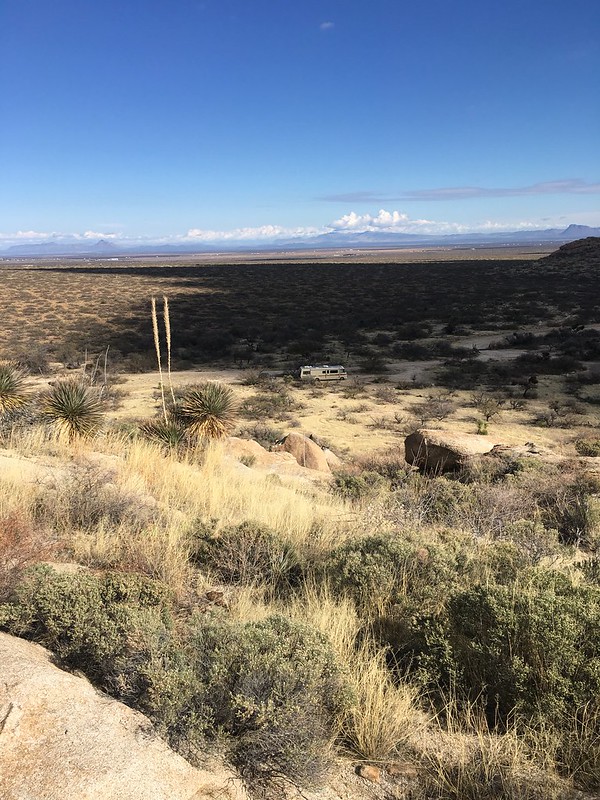 This is zoomed-in picture of Scott working at the picnic tables from our vantage point high above him on the rocks: 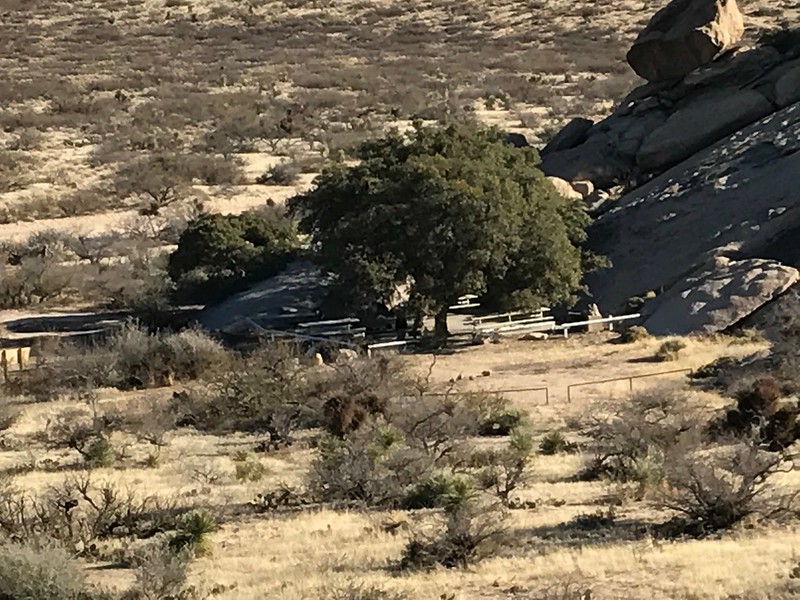 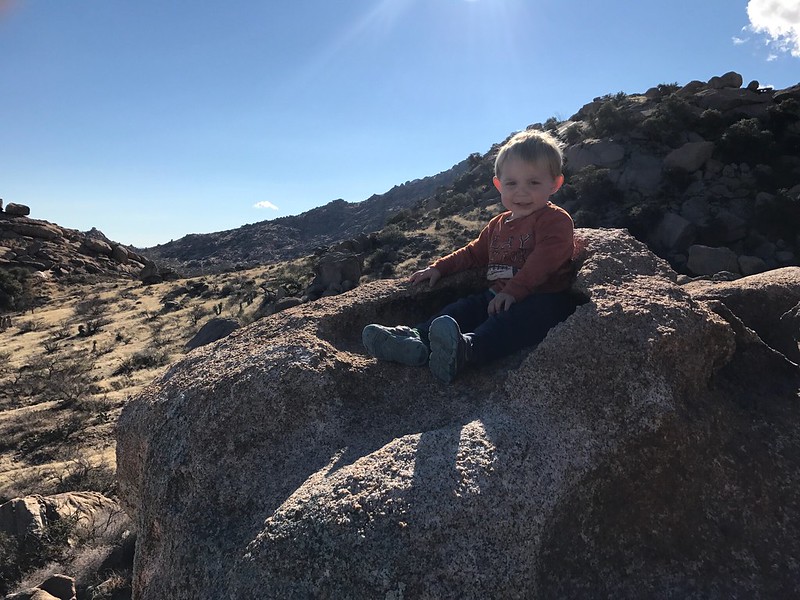 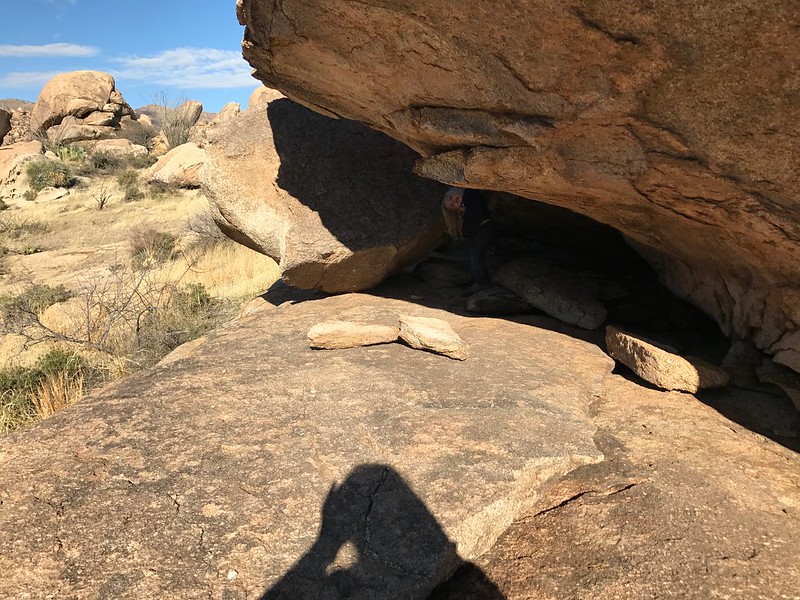 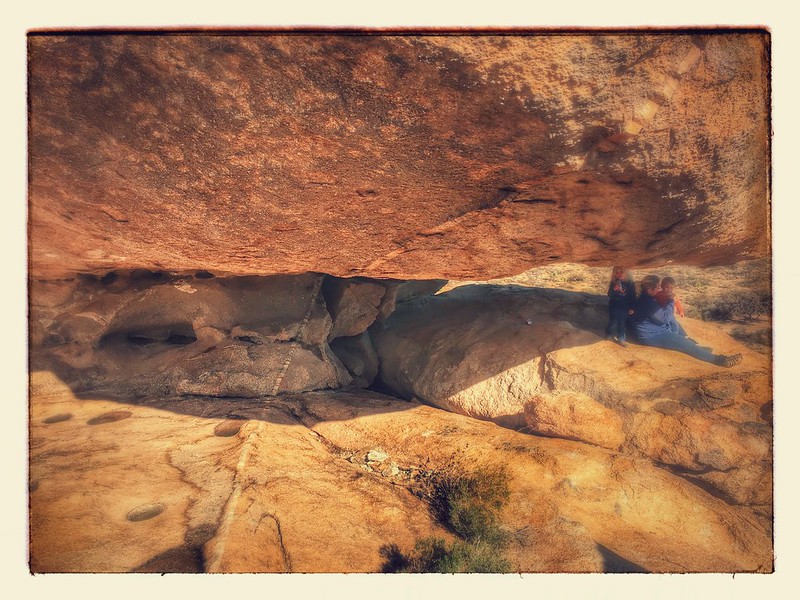 While we were enjoying some down time, I decided to organize a bit.  I’ve been considering going to a 4 bucket garbage system: organic matter (food bits, not black tank), recycling, paper and real garbage.  Right now we’re just separating the first 3.  In a perfect world we’d have a little composter… but that is not possible at this point.   This is how we get rid of paper garbage – it’s perfect fire starter material:  (and yes, Scott made Evie change out of her dress because if it ever caught fire it would melt into her skin) 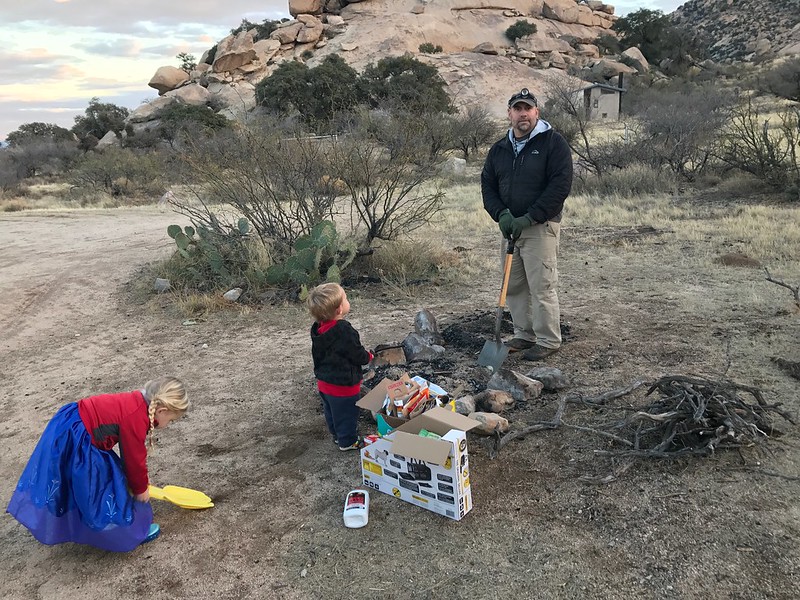 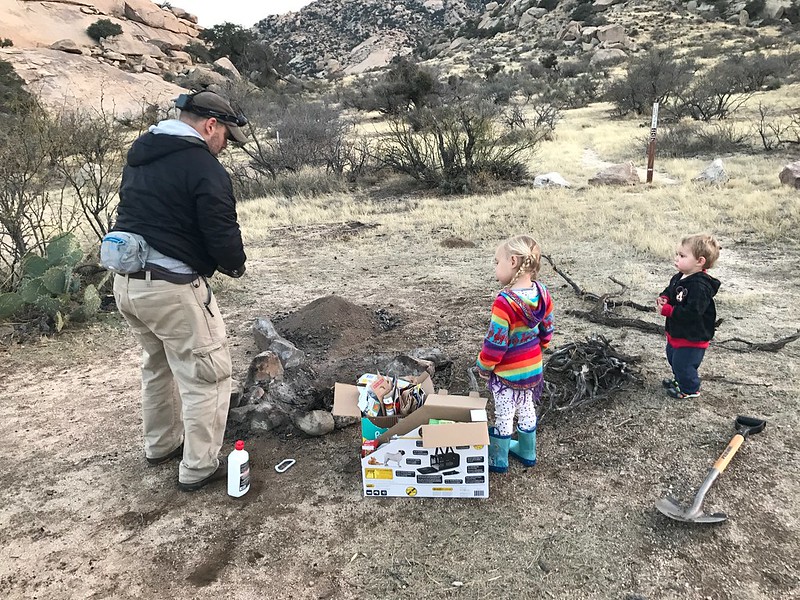 The stars were brilliant – some of the gazing yet.  Venus is low and bright and Mars is right beside her.  If you’re into stargazing check out the Star Chart app.  Point the phone toward the sky and it tells you what you’re seeing.  Awesome and easy!  I wish I had had that when I was just getting into astronomy.  Evie even built her own telescope out of 2 paper towel rolls, a toilet paper roll, a carabiner and some string (not sure about the function of the last 2 parts, but that’s ok).

Making our way through southern New Mexico has been a trip!  We aren’t used to border patrol check points.  The first time we pulled up to one Scott had no idea what was happening and neither did I.  We alternated...