Finally crossed the border from AZ into NM.  We were ahead of a nasty storm and trying to get to a decent hunker down spot before possible snow fell.  Which, by the way, I’m gonna throw the flag on snow in southern New Mexico.  That’s kind of bullsh*t.  I don’t mind being run out of Yellowstone in October because of snow.  If I’m less than 100 miles north of the Mexican border…. the only snow I ought to be able to find is in my margarita.  I have always had the impression that winter skips this part of the country.  Sure sure, they get “chilly” but  50 deg F seems light hearted when your sitting at -10.

I’m told by those in the know (Christy and Nicole) that snow is rare in these parts, but it does happen.  Tell me again why we aren’t in Mexico right now?!!?!  This time you are not allowed to use the ‘We Are the Millers’ movie as a legitimate argument point.

First stop, Deming, NM.  We made a stop at the local library because Scott had a business call he didn’t want to take while driving.  Jack has been not-well-behaved several times during those sorts of calls and this was with a new client.

The library was… not my favorite.  Big frownie face.   Do you get a vibe when you walk into a building or a room?  Some people call reading the energy (you know… if you’re into that sort of thing).  It happens to me all the time.  This energy was bad – not inky black, scary, run… but beige, unwelcoming, huffy.

Scott used the “conference room” (read: craft room for the blue hair set) and the kids and I used the children’s room.  While there were toys, they didn’t have their small parts.  For example, there were no trains on the train tracks.  No dolls in the doll house.  I gotcha.  You don’t want your stuff stolen so you hide it and make people ask so you can lecture them before handing it over.  I’ve never seen that in any of the 25+ libraries we’ve stopped at so far.  I thwarted that system by bringing in our own matchbox cars.  Play at will, kids.  Lecture free.

Things ended badly when I went into the “conference center” to see Scott.

There was a piano in the corner.  Jack being Jack, he made a beeline for it.  I opened the keys and quietly played the first few bars from the Entertainer to show off for him.  He smiled.  I closed the lid and started to walk away…. when this old ugly buzzard lady flew into the room on her broom.  “We don’t touch the piano.  It’s only used on special occasions.”  Not rude, but not friendly, I replied, “Got it. Ok,”  She then tried to launch into a lecture about not touching it.  I smiled, interrupting in as friendly a way as possible, “Got it.  No piano playing.”  (Heavy emphasis on PLAYING because it’s obvious if you know how to play the Entertainer you know how to PLAY the piano.)

I’m not proud that I sometimes know what people want to hear and refuse to say it just to torque them up a bit.  I acknowledge my character flaw and own it (and more often than not, get a kick out of it).

She stood in the doorway wanting me to apologize.  As there was no sign on the piano and I had treated it respectfully, I didn’t budge.  Instead I ushered the kids out making it clear we didn’t have a good experience to anyone who saw us on the way out.  I don’t recommend the public library in Deming. NM based on the crusty old broad in the back (sorry mom… I know you hate that word but it works in this case). 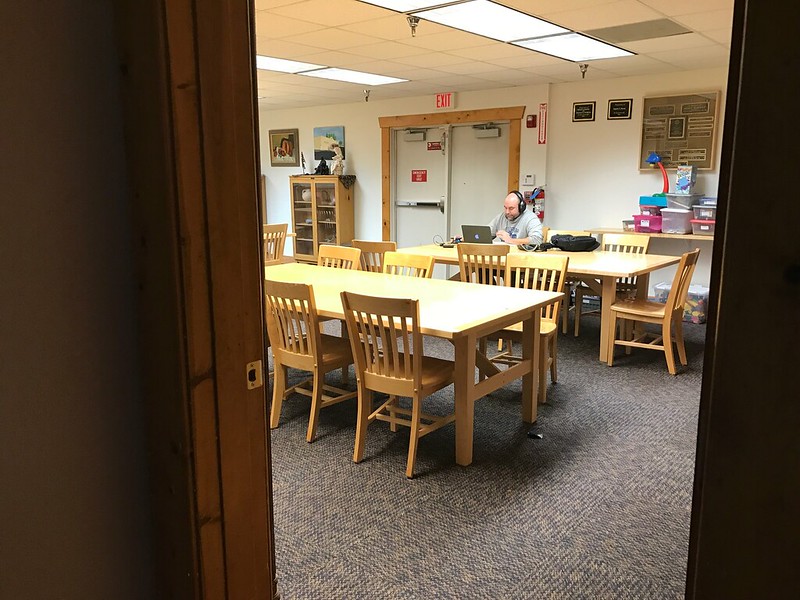 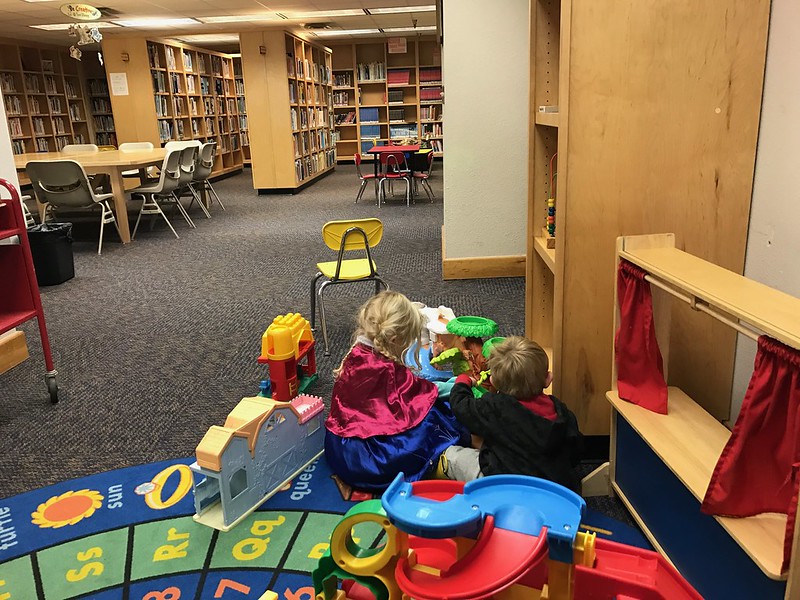 We were charmed by City of Rocks State Park just north of Deming.  Randomly, out in the middle of what looks like the world’s biggest valley, is this cluster of 5 – 30 ft rocks that are perfect for climbing and scrambling around.  There are passageways and paths and overlooks.  We spent 2 fun nights dry camping and playing.

While it didn’t technically snow where we were , the snow line was maybe a couple of miles a way.  I’ve never seen that before.  When it snows in New England, everyone gets snow.  It’s a shared experience.  Down here, there was a line.  We were on the right side of it.

Although we missed the white stuff by the skin of our teeth, we did get driving rain.  The first night we sprung 3 new leaks.  Needless to say, it was an exciting night in the RV!  Evie woke up soaked from her head to shoulders, the shower was actually used as a shower for once and there was a small drip onto the dash.  Nothing major, but it was enough to keep us busy.  Once everything dried up Scott used a bottle of caulk to fix us up quickly. 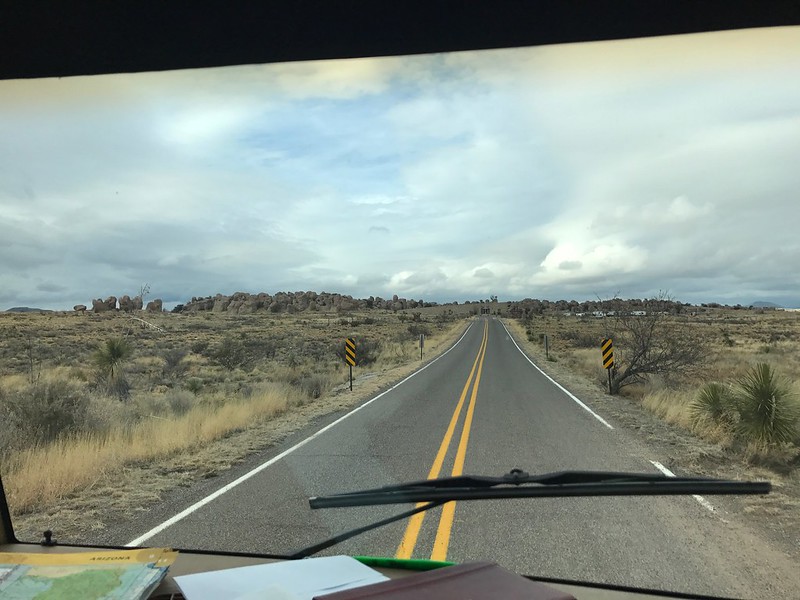 It was chilly on our full day in the park.  We braved the low temps and wind in the morning but we were looking to get genuinely warm by the afternoon.  The kids and I drove to the local hot springs and had a fun afternoon.  I didn’t know the middle of NM has a volcanic past.  The hot springs in the area are famous (at least locally).  According to the propaganda the springs in Truth or Consequences, NM are some of the best in the nation.  FYI – I can’t get past the name of the city.  Weirdos. 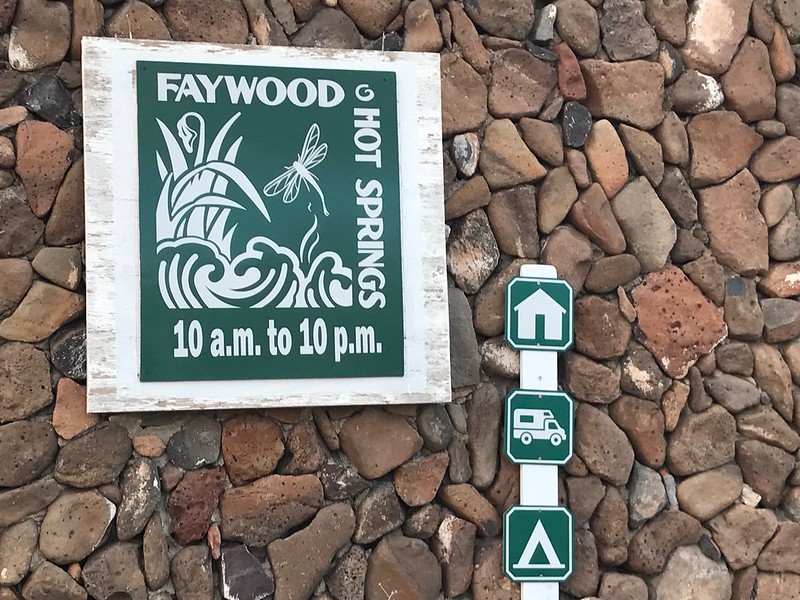 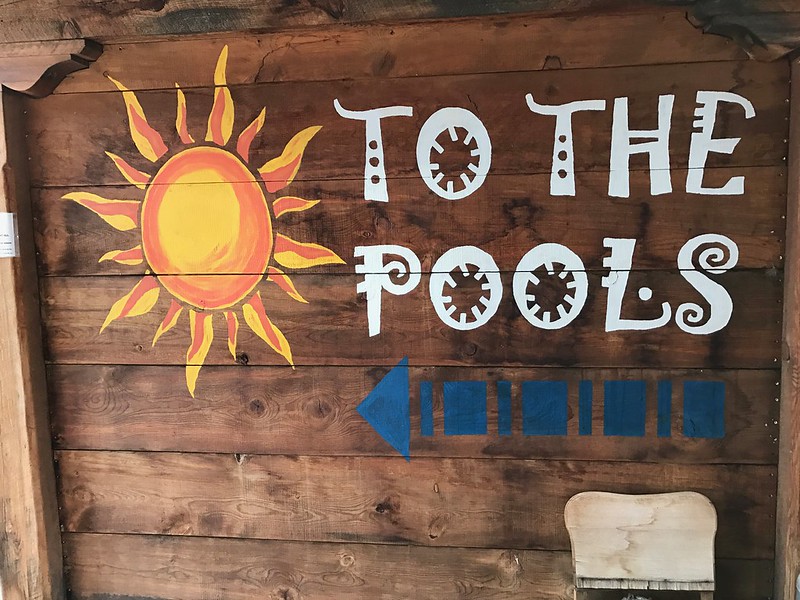 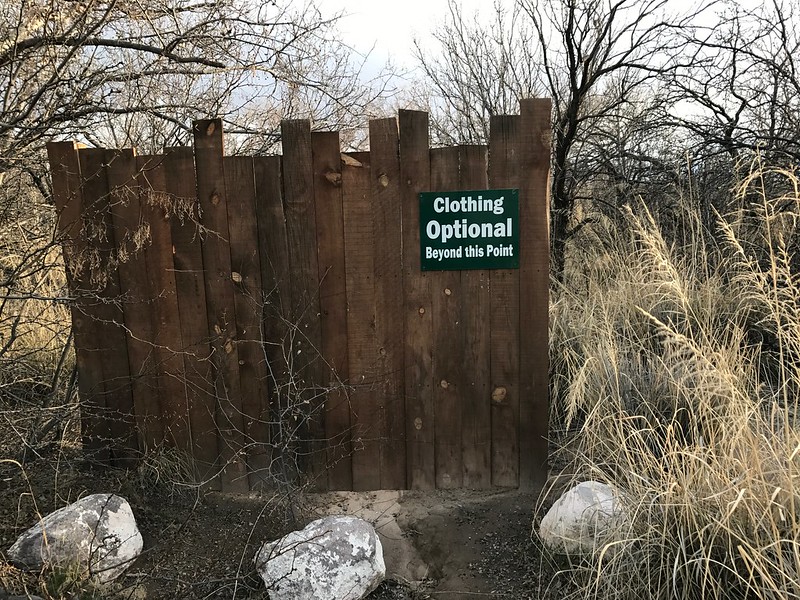 No, we didn’t take a peek although that took some serious self restraint. 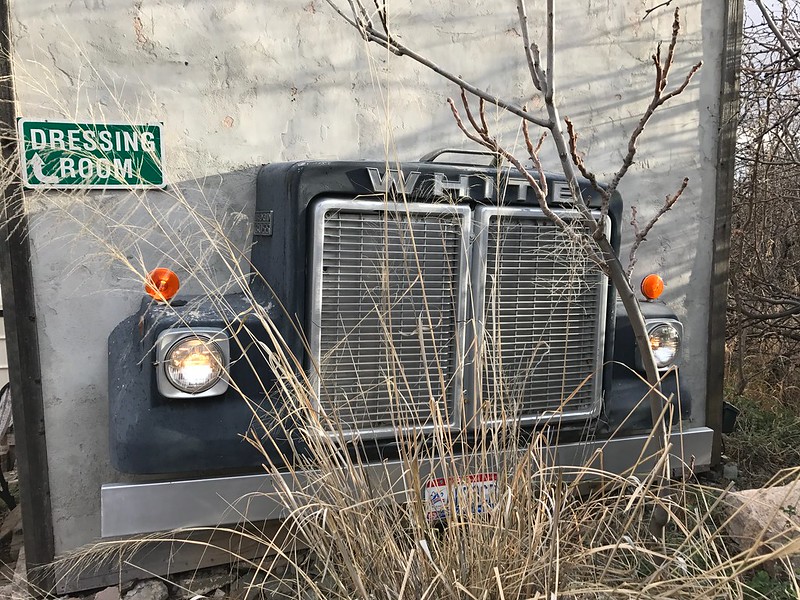 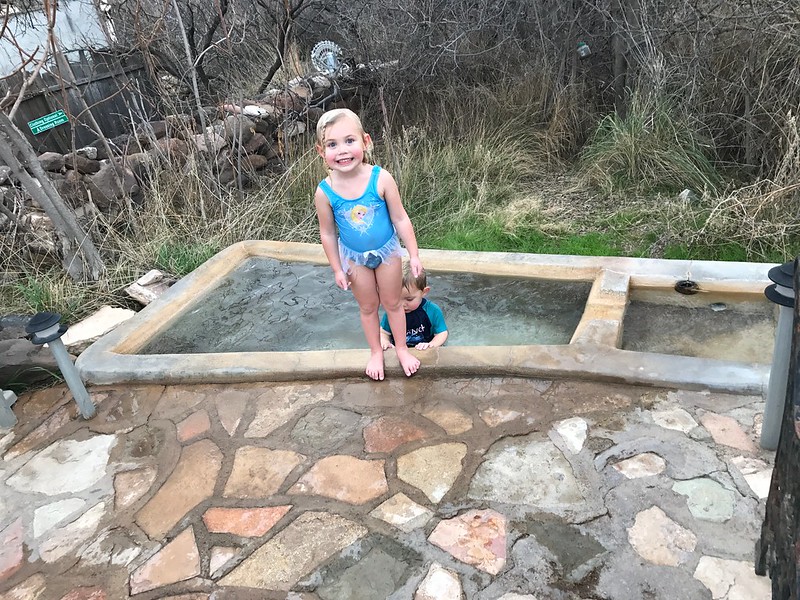 She is actively standing in front of him trying to deny me a picture.  She can be a sheister…. she loves him but I wouldn’t put much past her. 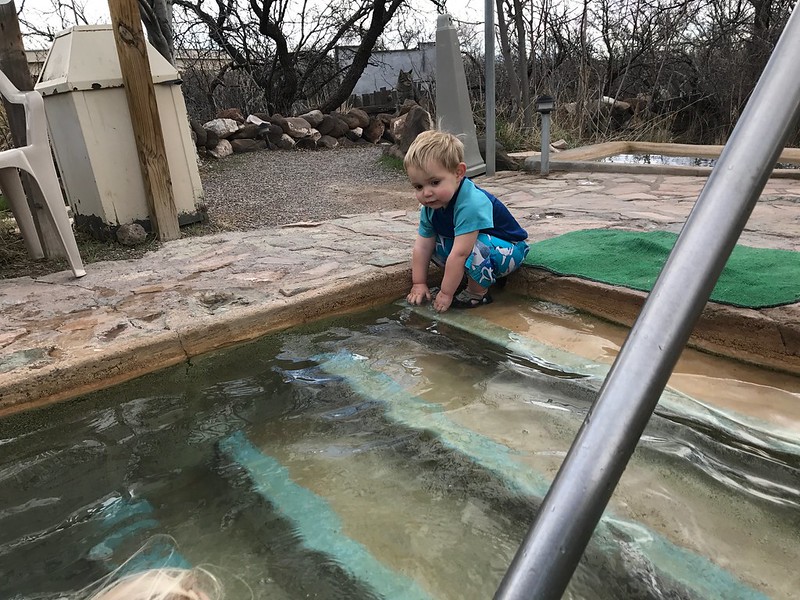 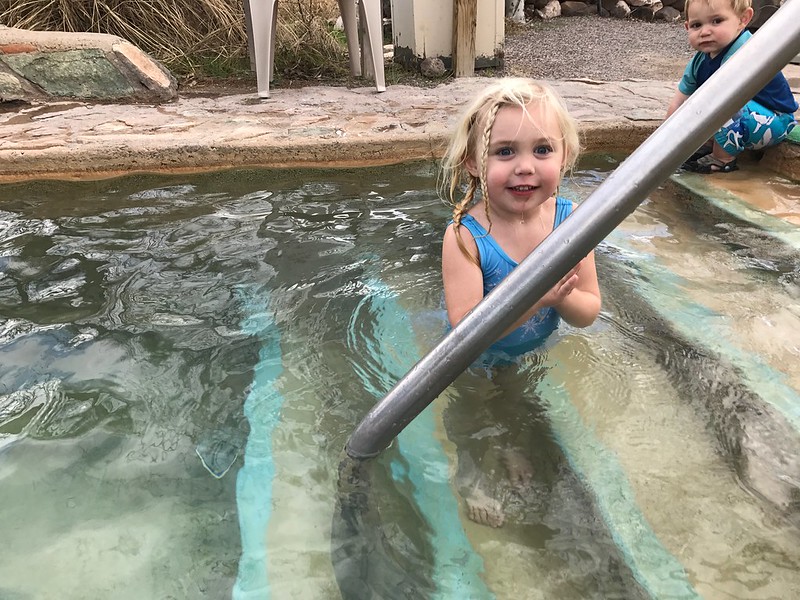 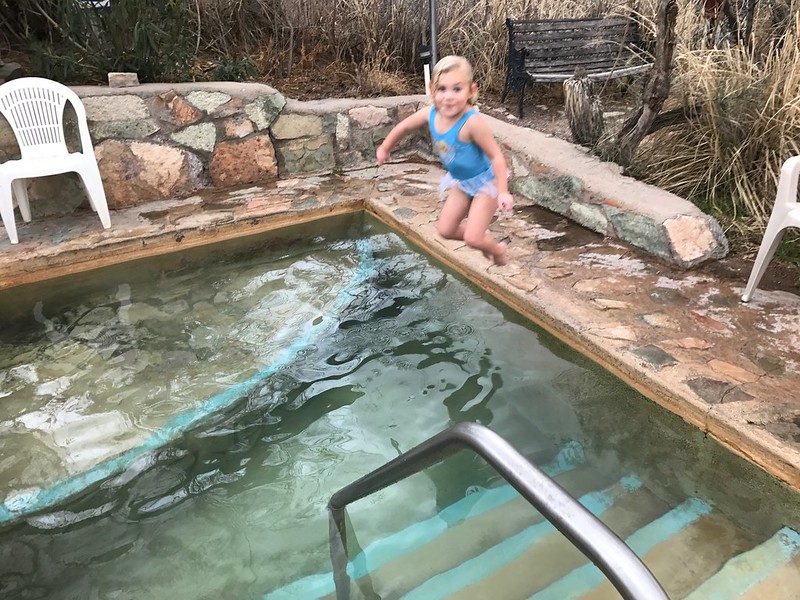 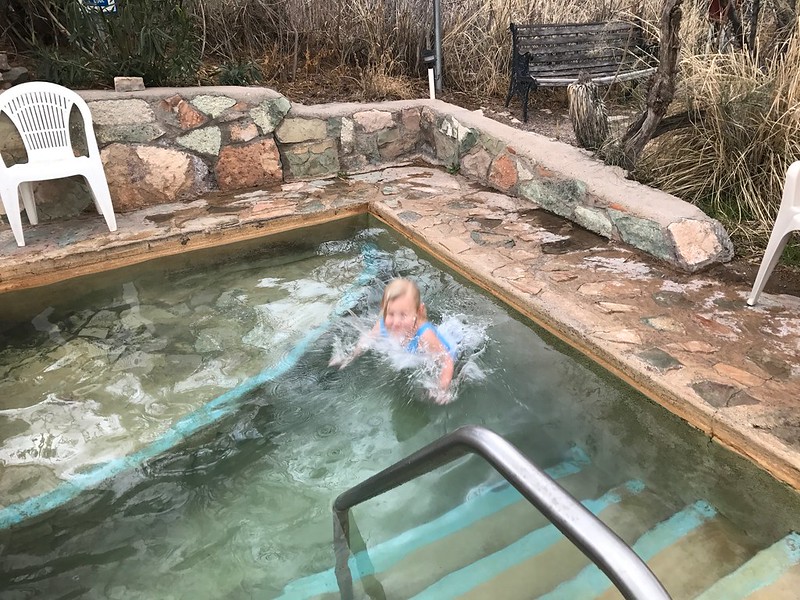 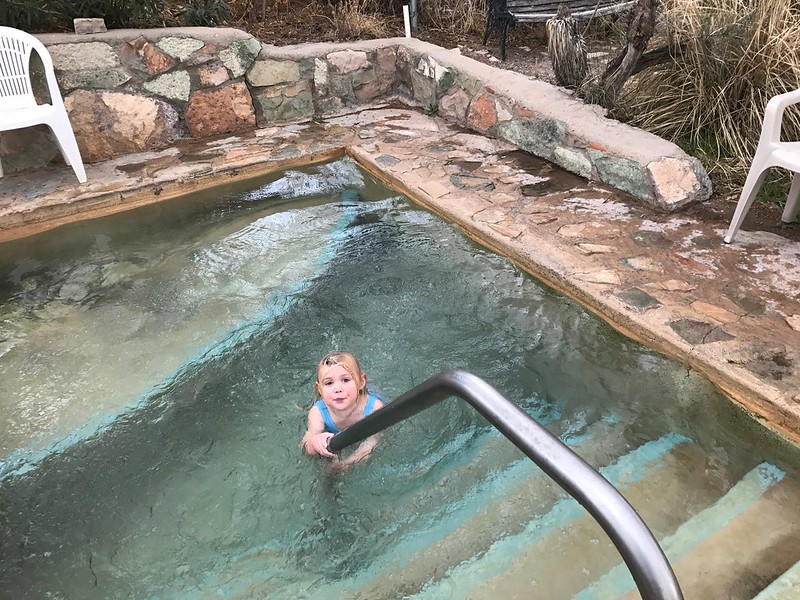 The pools were a perfect way to warm up and use up some extra energy.  They slept well that night.

We stopped in the gift store on the way out and learned this.  Fun fact – not all barbwire is the same.  Who knew?!  Apparently, the way it’s tied indicates who owns it.  It’s quite possible this is a well known but being neither from a farm nor from the middle of the country, my mind was officially blown.  From now on I’ll look at barbwire and think, “Hmmmm… I wonder who owns this barb.”  Furthermore, how can I get my own? 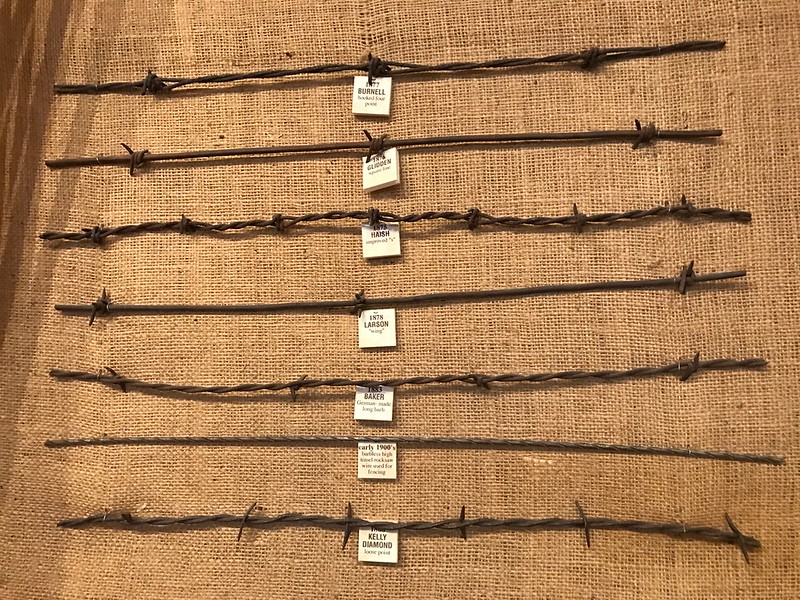 We're still figuring out where to go, when to leave, etc.  I'm not gonna lie, it's a little frustrating.  I'm not entirely sure what the hold up is apart from me being flighty and struggling to reconcile some tough requirements...