How We Brought a Cartoon to Life – Rt 66

Friday evening outside of Kingman, AZ…. Evie, “Can I watch Paw Patrol on the ipad?”  Me, “No, you’re going to watch Cars instead.”  Evie (surprised at a partial success), “Really?  Ok.”  I specifically rented Cars and she was going to watch it whether she had asked or not.  Why?  Because I wanted give her the first taste of making something abstract become tangible reality.  I won’t go into my deep desire to make history/science/art/math come alive for her and Jack by visiting the places where something has happened or meeting the people doing it.  Bottomline, my plan was to show her Cars then drive Will Rogers Highway.  What a fun way to turn one of her movies into a legit history lesson?!

Historic Route 66 originally went from Chicago, IL to Santa Monica, CA, by way of Missouri, Kansas, Oklahoma, Texas, New Mexico and Arizona.  It was one of the major routes into CA during the dust bowl.  I’m still haunted by mental images from John Steinbeck’s Grapes of Wrath.  The route was officially taken off the books in 1985 when the interstate highway system (now Rt 40 in northern AZ) made it obsolete.  However, it’s starting to make it’s way back onto maps as a scenic byway.  Such as: 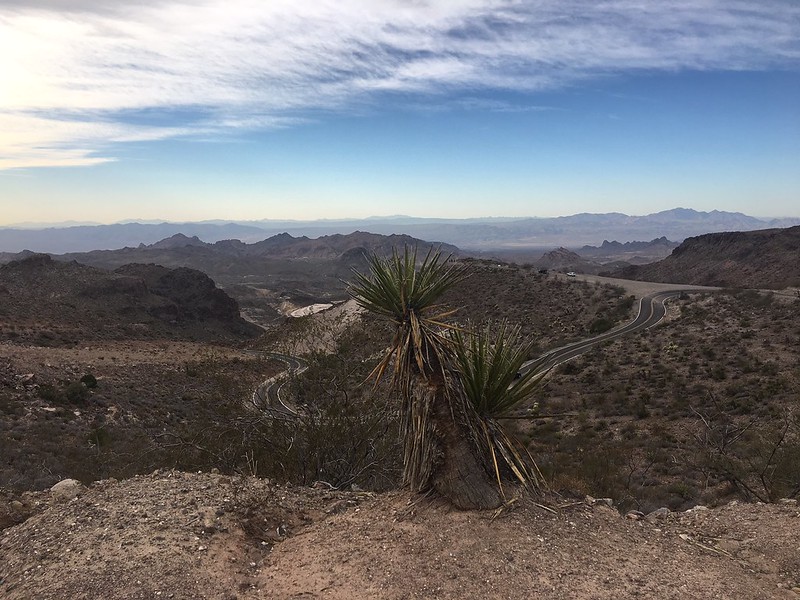 We hopped on the old road just west of Kingman, headed west.  The destination was “an old ghost town called Oatman”.

The part of the highway we saw was tight switchbacks, no guardrails and spectacular views.  We were happy to be in the Grey Man and not the RV.  Supposedly up to 40 ft’ers are allowed on the road.  We even saw a jumbo 5th wheel but that poor man must have about crapped himself when he got about 10 miles down the road. 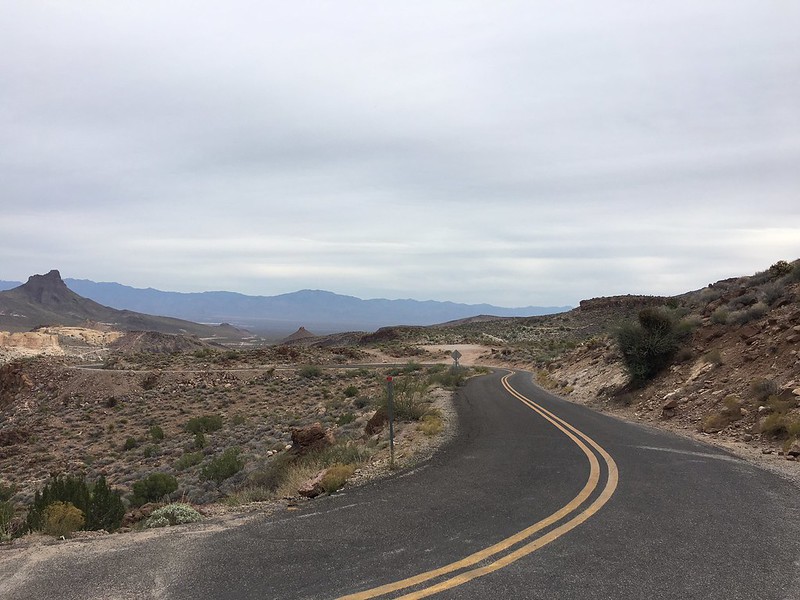 Heading up Sitgreaves Pass, 66 looks like it’s supposed to look.  There are abandoned stone buildings falling over and plenty of rust. 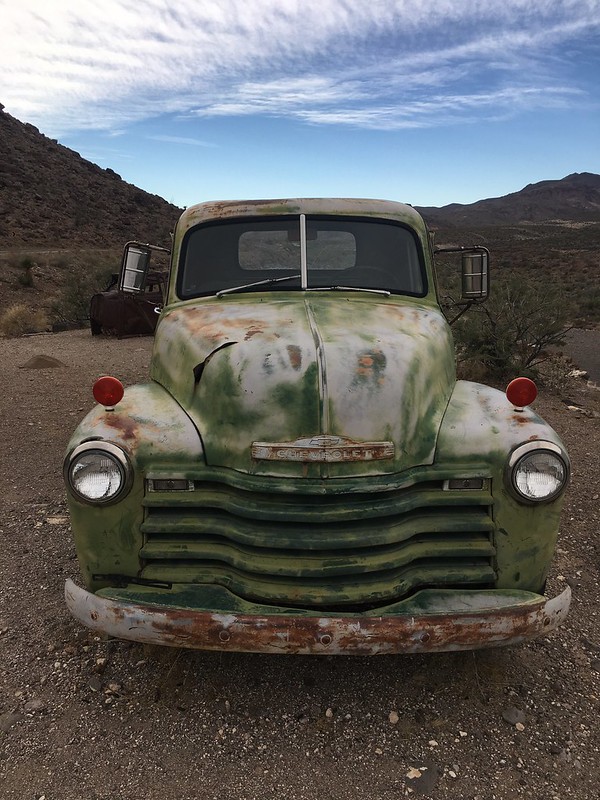 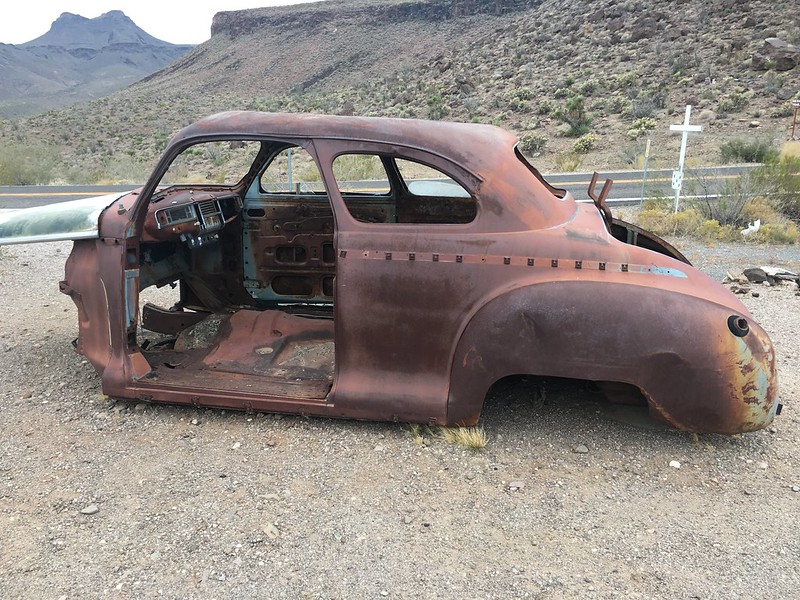 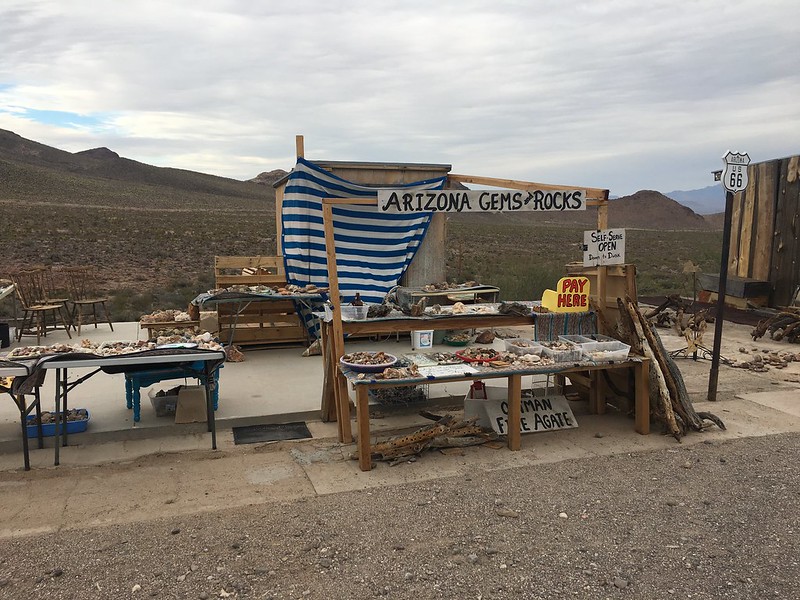 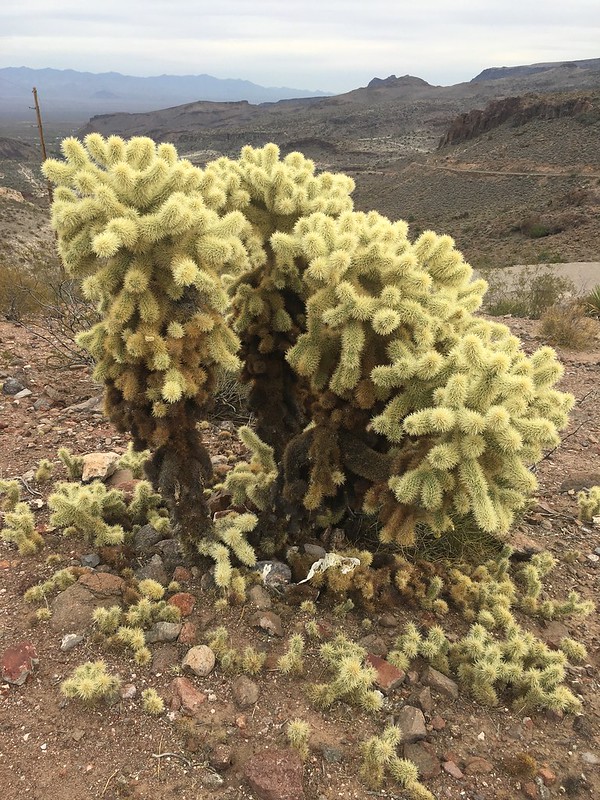 We came up on an unnamed site on the side of the road.  An ambitious rock staircase led to a nice look out and a little natural spring.  A well was built around the spring to collect the water.  If I was a betting lady I would say the old timers had relied on this water source on their push west.  Now it’s just a nice place to take in the view and there are goldfish in the very green, very not-drinkable water. 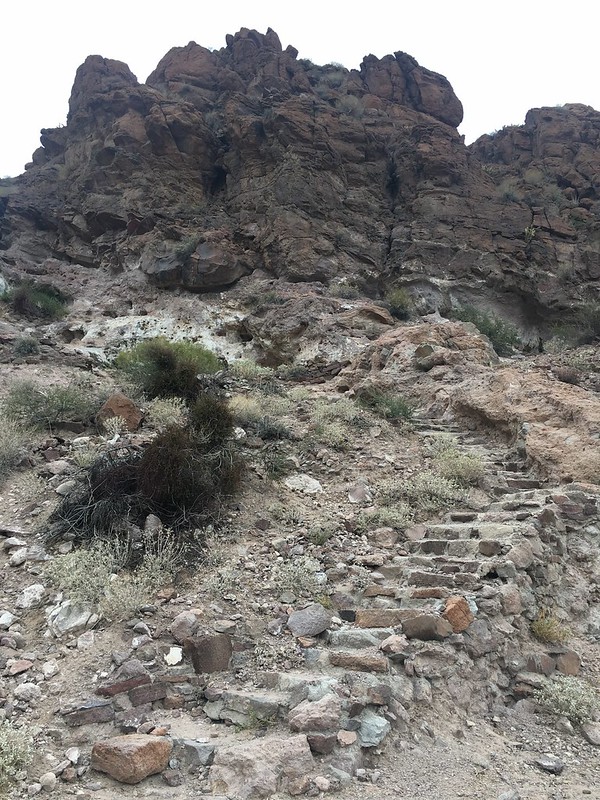 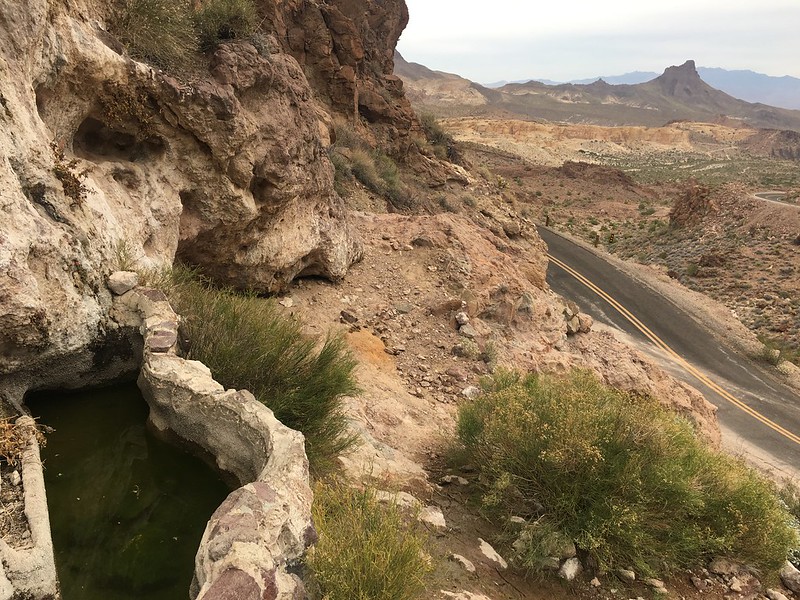 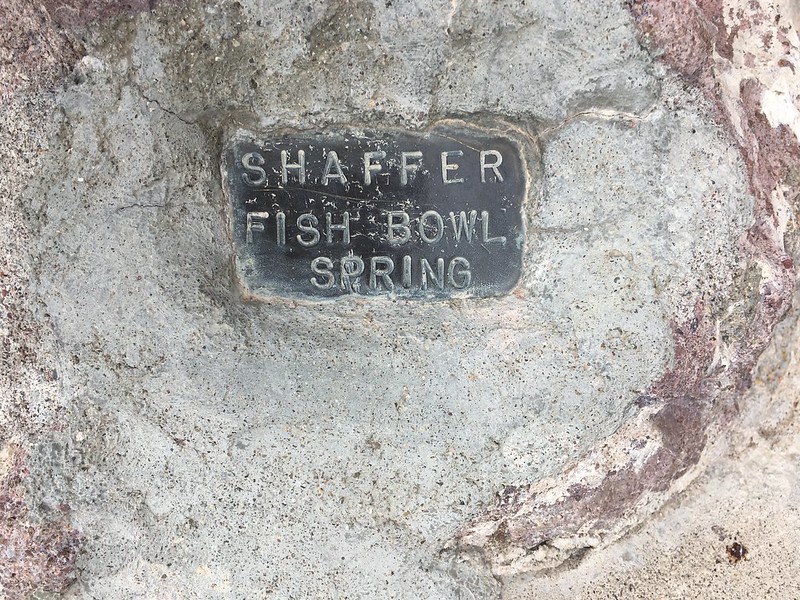 The summit of Sitgreaves Pass, elevation of 3556 ft, is something.  You can see from Bullhead City, Arizona to Laughlin, Nevada. There’s an old marked grave up there and a nice view of the Gold Road Mining operation.  I didn’t realize that we still mine gold in the U.S.  It’s sort of quaint and charming to think of the gold rush but there are still prospectors out there going for it.  I actually talked to one.  She’s heading out on Thursday to strike it rich.  I love that.  I’m totally going to buy the kids a couple of pans and we’re going to watch YouTube to figure out how to do it.  Nothing like a good treasure hunt to get the blood flowing. 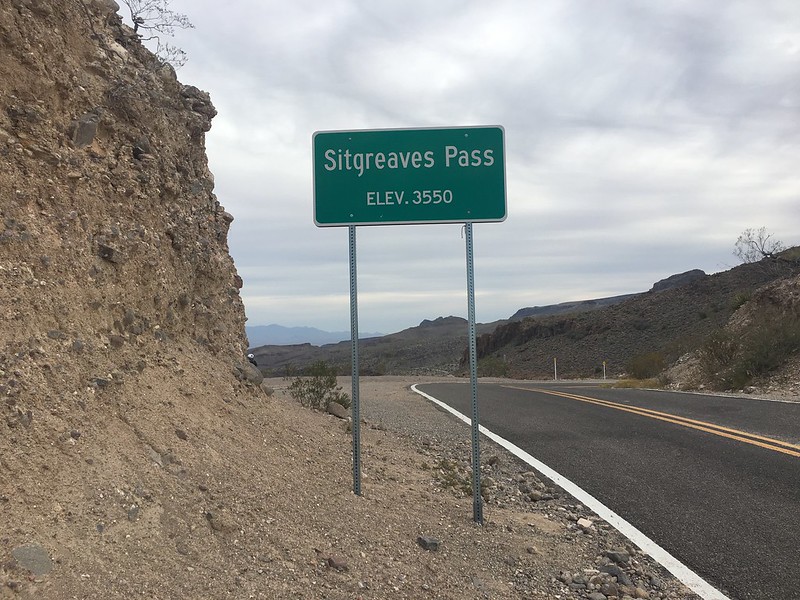 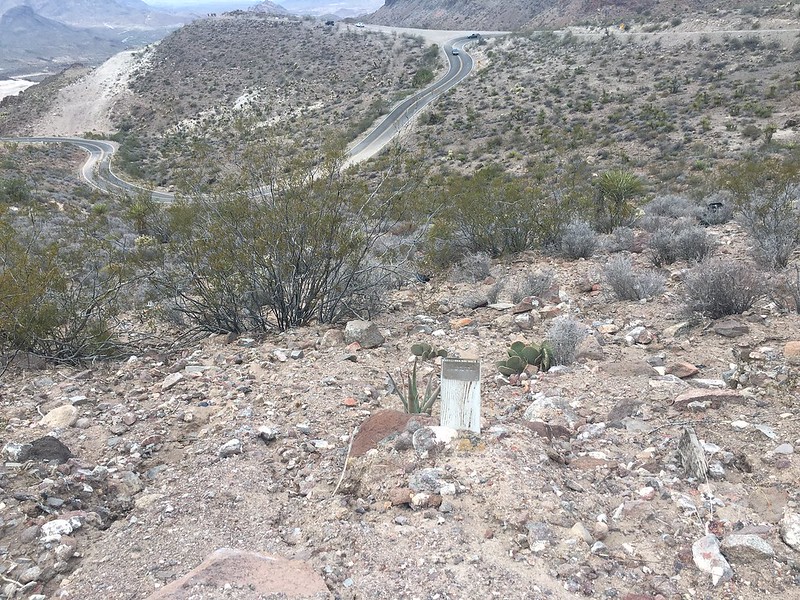 The ghost town of Gold Road stands beside the highway near the mine.  The buildings are mostly all gone (there was nothing left standing higher than waist height).  Apparently it was a town until 1942 (i.e. they had a post office) but by 1949 it was razed in order to save taxes. 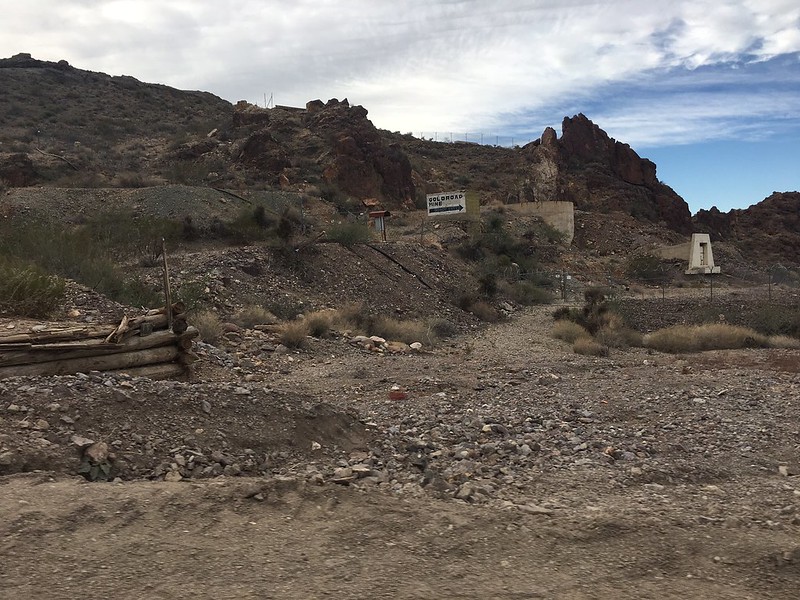 You can also catch glimpses of the parallel stage coach road.  I told Evie she could get out and walk it since she wanted to get in horse and buggy so bad.  She pursed her lips and squinted her eyes at me.

Round about this time, we came into a situation.  I’m not gonna sugar coat it, Scott was right and I was wrong.  100%.  I was more than wrong, I was distracted and I actually got in the way.  Not cool.  Poor form, Warren.  Get your shit together, woman.

On the right side of the road was a wild mule.  They’re all over the place out there – descendents of the miners’ mules.  I got excited because I always do when I see a wild animal.  Meanwhile on the opposite side of the road was a white truck, pulled over… ostensibly looking at the mule as well.  I told Scott to slow down.  He did.  As I was taking pictures, the man from the truck approached Scott.  Scott was courteous. I wasn’t paying attention.  Somehow the man said something about wanting to show us pictures of the mules in Oatman on his ipad and was insistent that we stay put.  Then his full grown, 220 lb adult “son” started walking towards the car in Scott’s blindspot.  In retrospect, their aggressiveness to try to get us to stay was wrong.  I, however, was worried about getting this stupid picture: 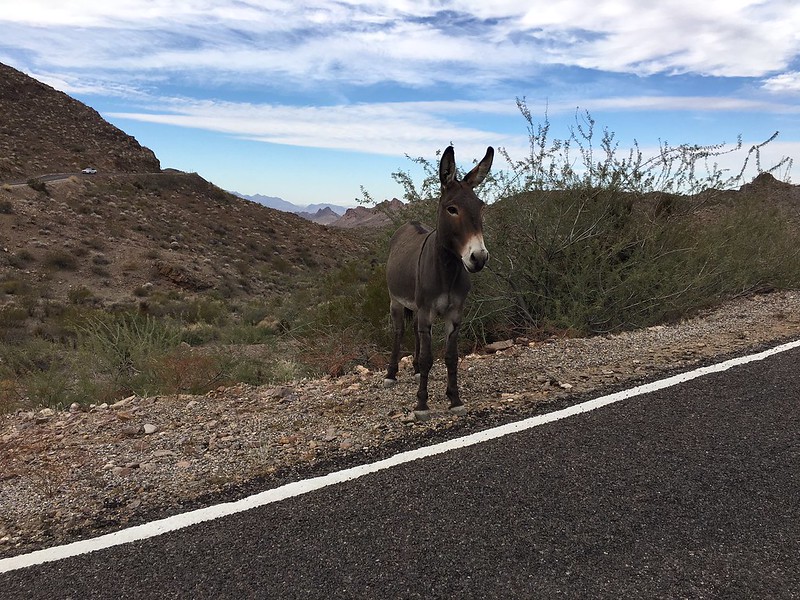 Scott’s spidey sense was going off big time.  While I was demanding that he stop moving the car, he was already pulling away.  That was absolutely the right call.  He took a heaping of shit when it went down though.  Mea culpa.

Thankfully, Scott lives by our golden rule: you always always always follow your gut.  What your gut says, you do.  No questions.  No second guessing.  (The silver rule is treat others how you want to be treated.)  He took off out of there like a bat outta hell.  I’m so glad.  No way to know if it was anything.  Maybe it really was some dude and his son.  But you know what, we’re all safe.  We may have come off as rude.  I’ll gladly take the karma hit.

So Oatman, “a classic ghost town”… not even close to accurate.  It’s a thriving tourist trap full of people (500,000 visitors a year) and 150 full-time residents.Unless you want to hang with overweight biker types swigging beer in an outdoor cafe (normally I would, but it’s hard with the kids) it’s a pass for Oatman. The town was so busy we had to crawl through it.  Every trinket and piece of junk being hawked was from China.  The buildings on the main street looked authentic, but that’s about it.  Go for the drive, don’t stay for the sights. 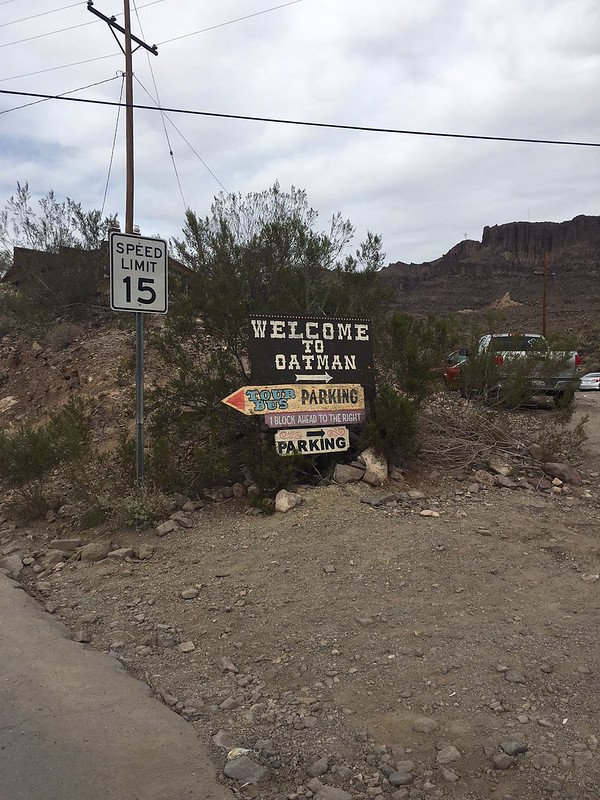 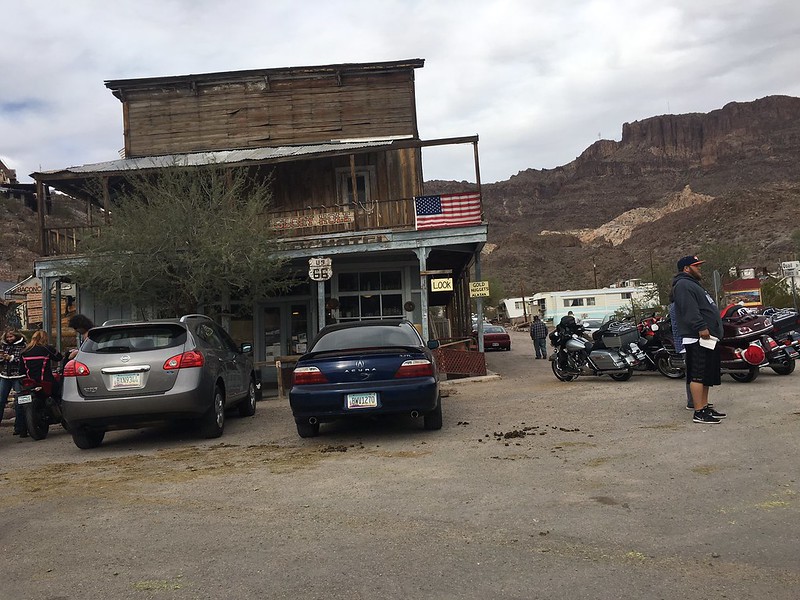 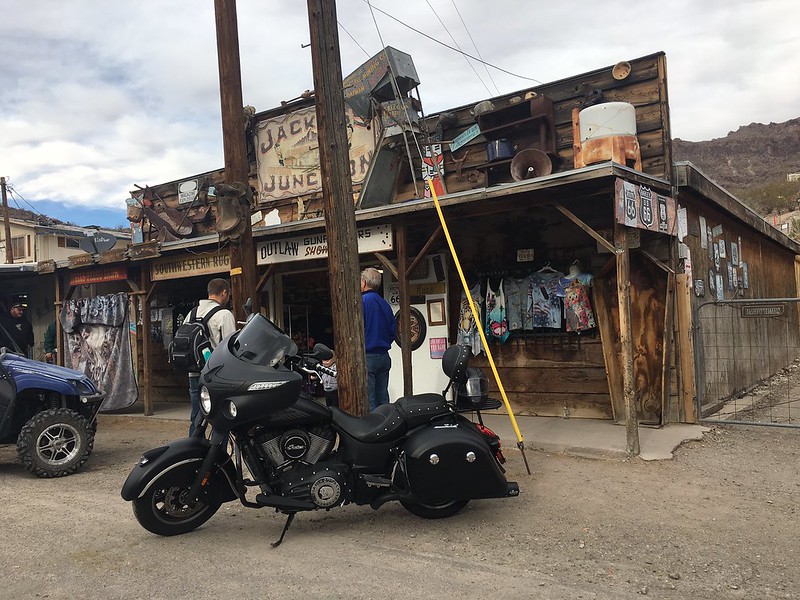 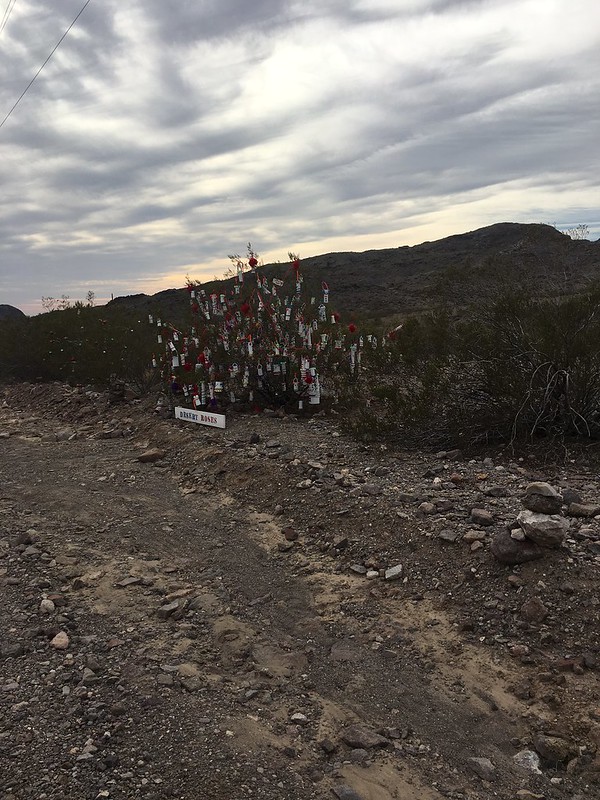 So why aren’t there any pictures of the kids?  Oh… that’s because they decided to nap through the entire car ride.  So much for my grand plans….  Maybe next time? 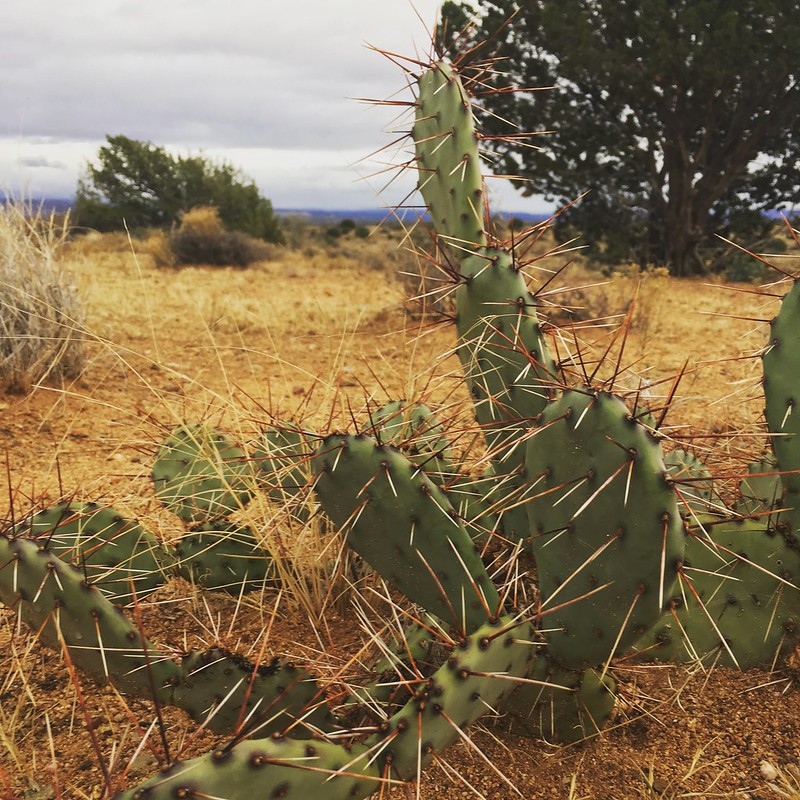 What did I not get to see that's still on the list?  Oh, I have A LOT answers to that (I'll start with all of Washington, Oregon and Idaho) but here's one - the Corvette Museum in Bowling Green, KY....

After being away, we jumped right into a day of adventuring.  After the kids and I did Bear Butte, we ate lunch, picked up Scott and took off for Mount Rushmore.  Rushmore has never been on my must-do list but...