Daily LifePicturesThe Story of Us

All Science All The Time

I’m not gonna lie, I’m actively trying to turn Evie and Jack into scientists.  (Nate doesn’t need to be guided, he’s clearly a natural engineer.  I may not consider myself to be a real engineer, but I have enough experience to know one when I see one.) If they don’t actually become scientists in the traditional sense, that’s totally fine.  My goal is to embed the scientific method so deep in their thought process that it will be their default way of thinking.  Logic.  Curiosity.  Deduction.  Trial and error.  Creativity.  Play.  Most important of all… number 1 highest priority: critical thinking.

We spend a good portion of our days doing experiments, writing about what we’ve done, drawing pictures about our theories and the results of our investigations and coming up with more experiments.   Meanwhile, I’m capturing it all on our little website… which is slowly growing a little following and people in my Facebook group actually share experiments and photos.

This is how I’m using our stationary time between world adventures.

When I’m old and I sit down and reread our adventures, I want to remind myself of what we did.  You’re welcome, future self.

This was a cool find.  It’s a metal that melts at something like 85 deg F.  It melts in your hand and turns into something that looks exactly like Mercury.  The bonus of this stuff is, if you don’t eat it, it’s non-toxic.  Can’t even tell you how many times we’ve been looking for something to do, pulled this out just to have something to fiddle with and spent a couple of hours testing it. 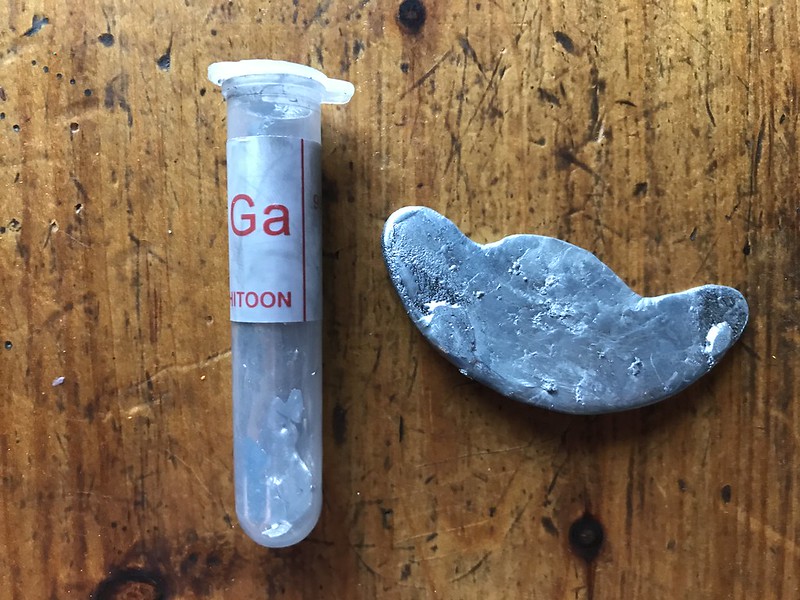 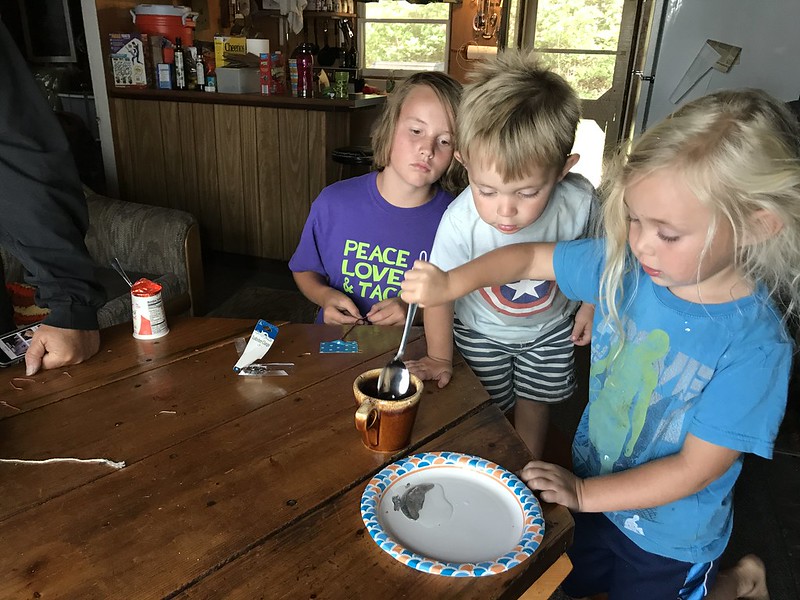 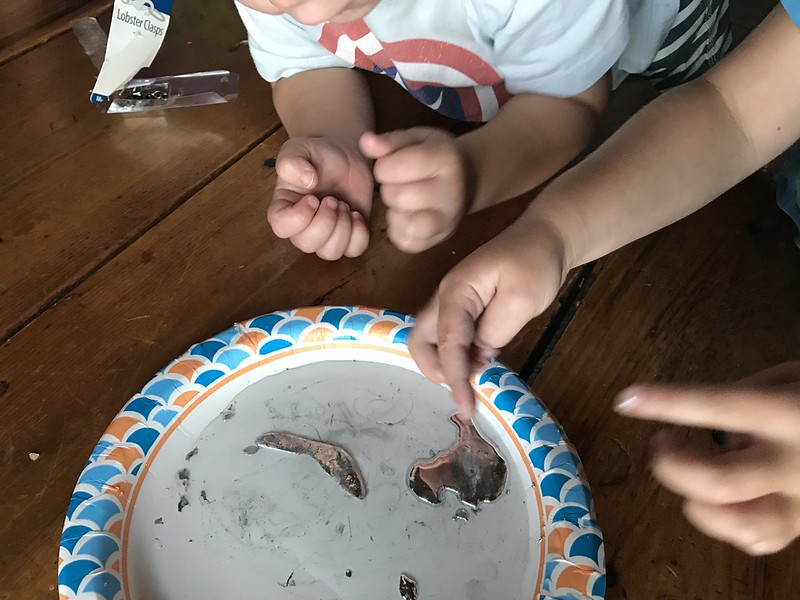 We made malachite (the green stuff that forms on copper) with pennies thanks to a reaction between the copper, vinegar, and air. 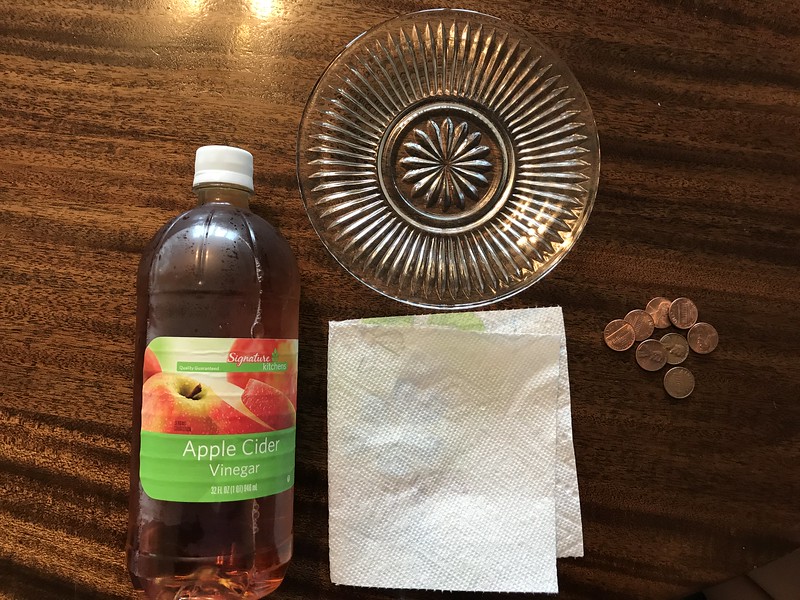 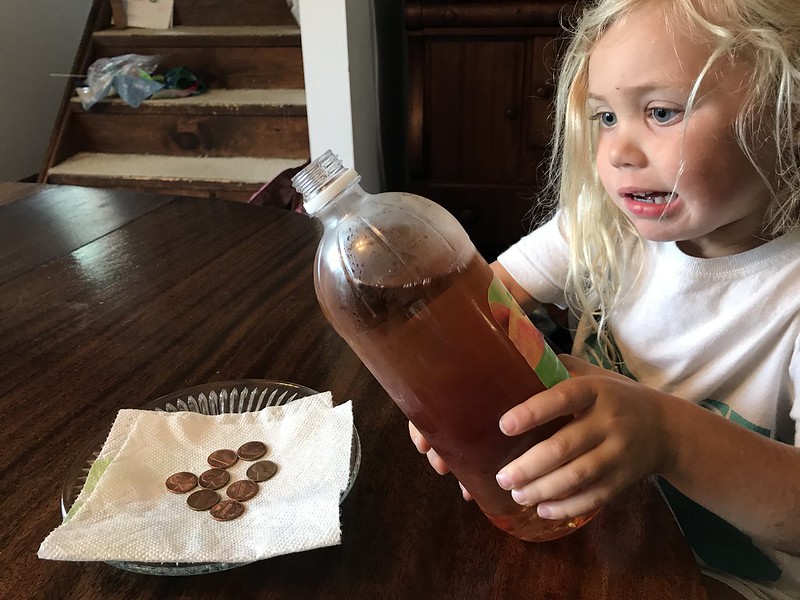 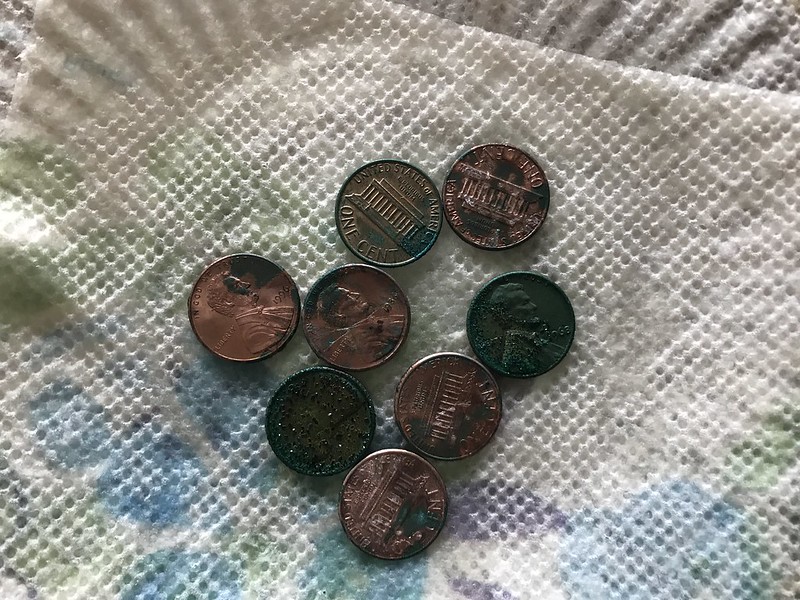 This is my favorite one of the last month or 2.  We dissected a squid at the Portland Children’s Museum.  The kids loved it.  Evie and Jack went with their cousin Leo (3yo).  We weren’t sure how they would react.  Turns out, every kid is a scientist at heart.  They were respectful, interested and participated without being all grossed out.  Jack’s interest wandered about 3/4 of the way through (he’s 2… I didn’t even expect that much attention) and he and Grandmom played in the rest of the museum while finished up with the eyeball.  Ev and Leo got to squish ink out of the ink sac.  Just so cool. 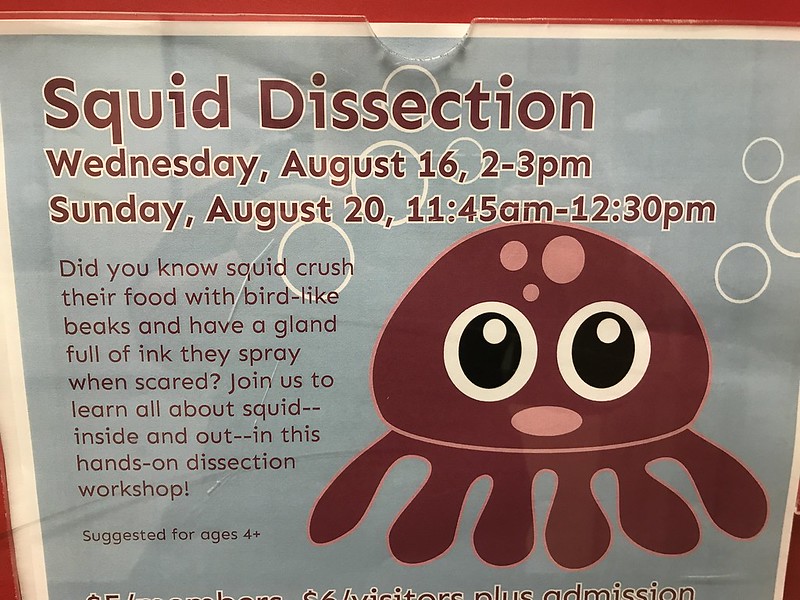 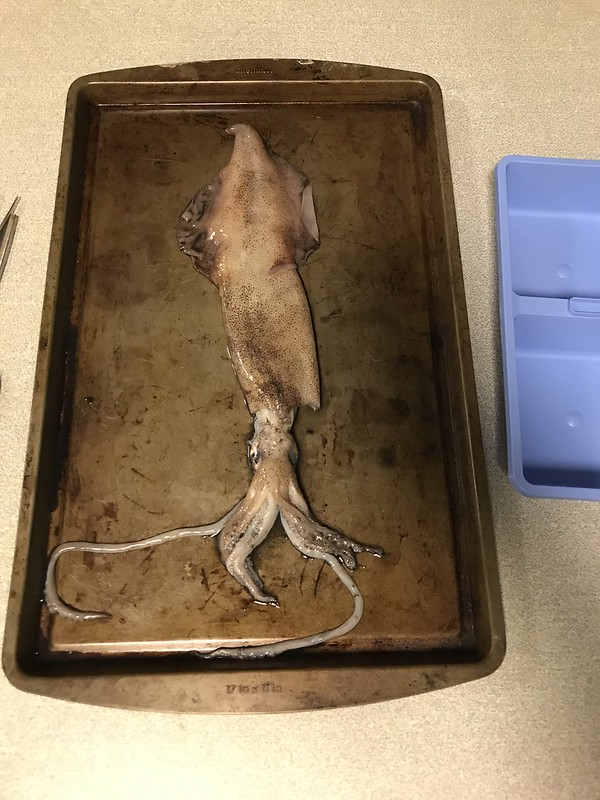 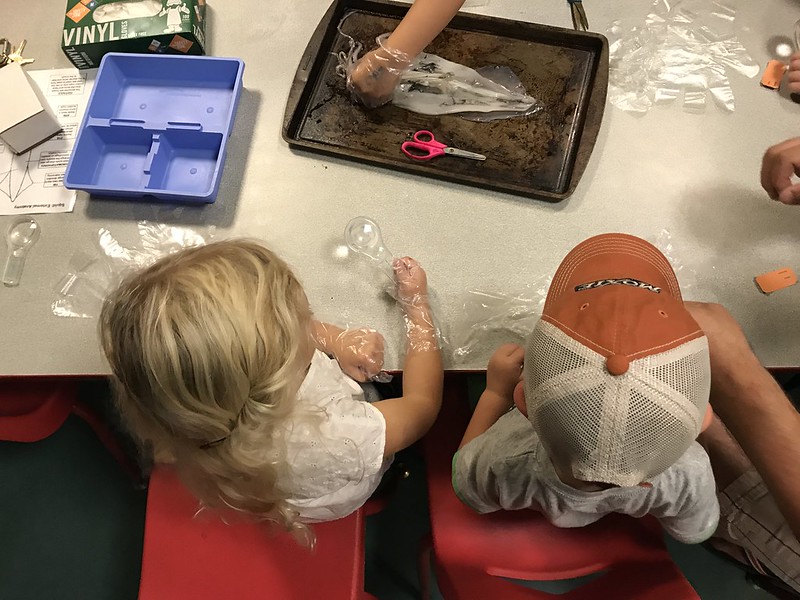 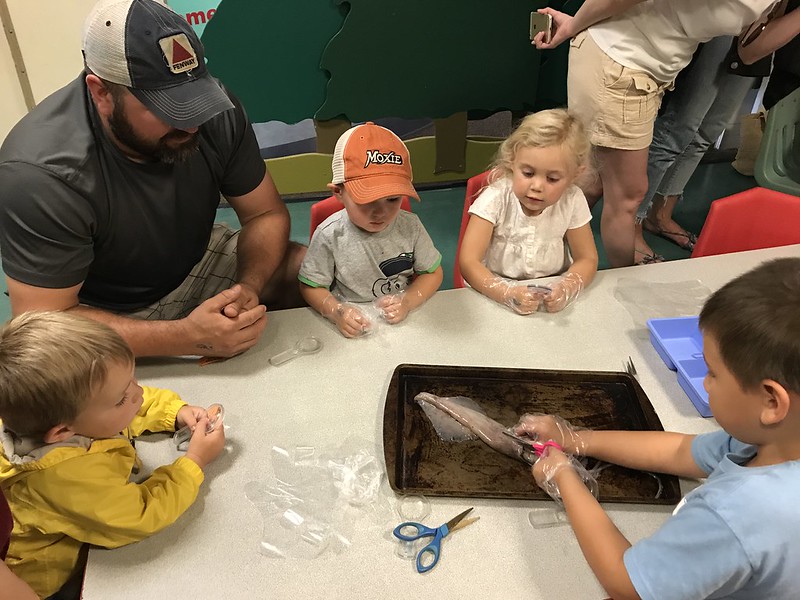 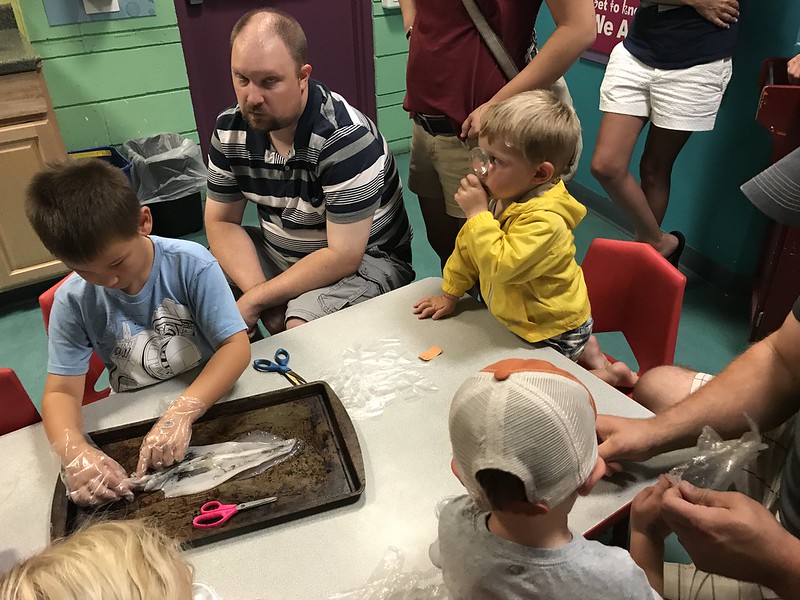 Literally unhappy about the stamp on his hand.  The two’s man… I’m grateful for the opportunity to learn patience (again). 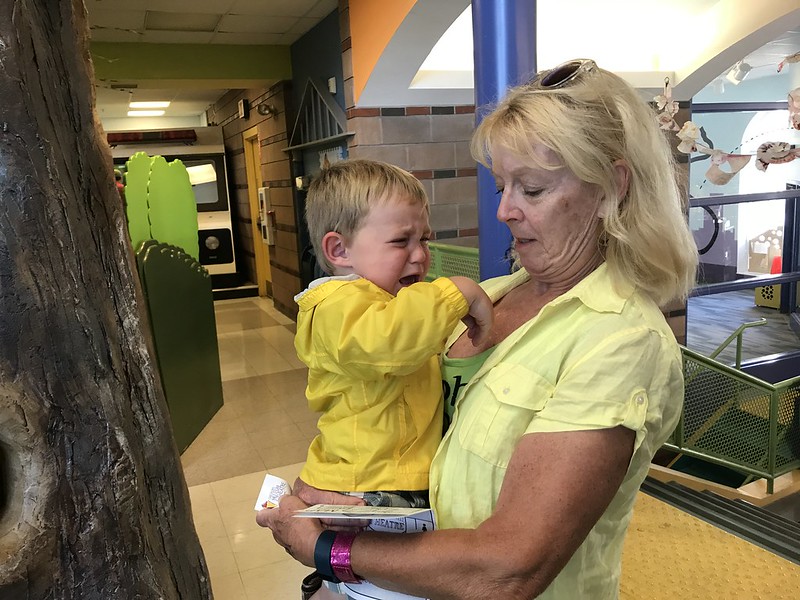 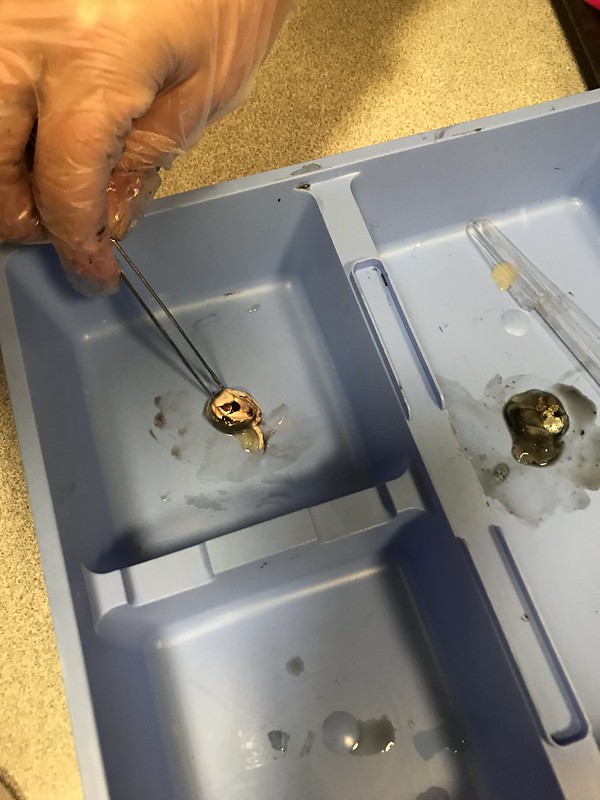 Then we played in the museum for a bit and learned about light and bees and other things. 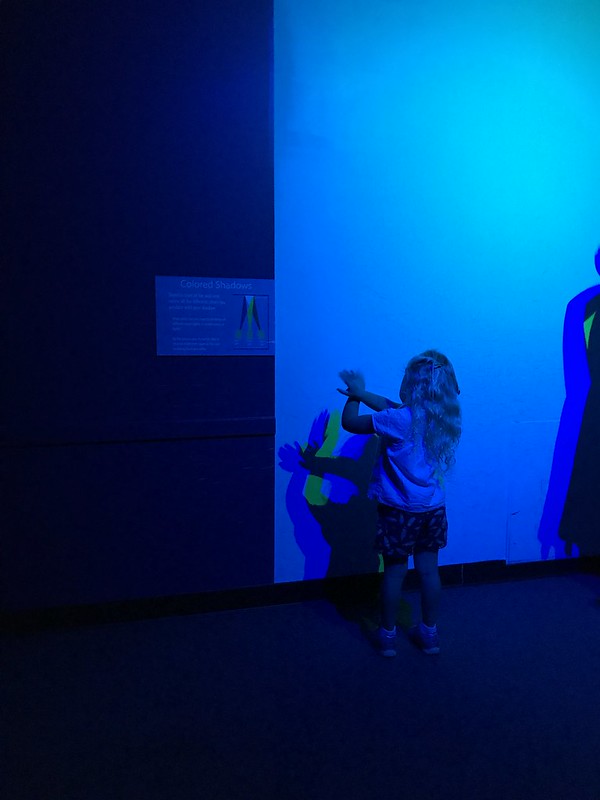 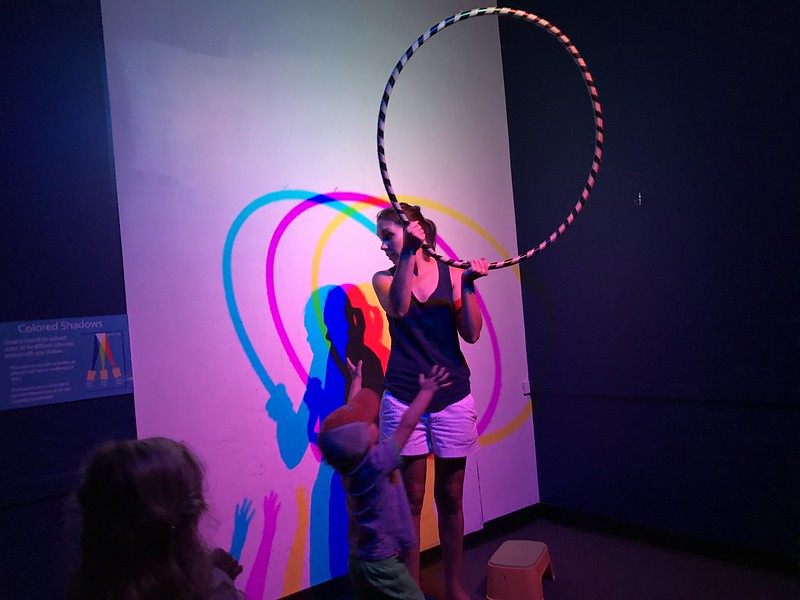 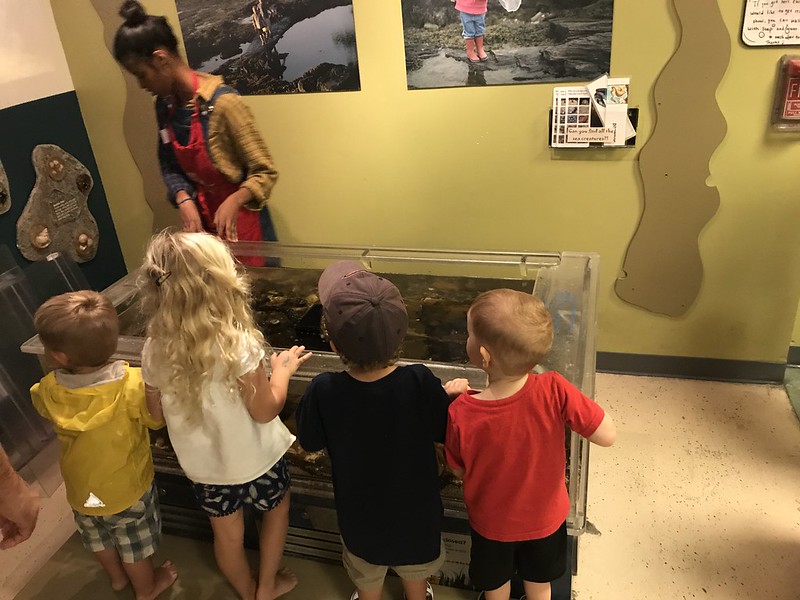 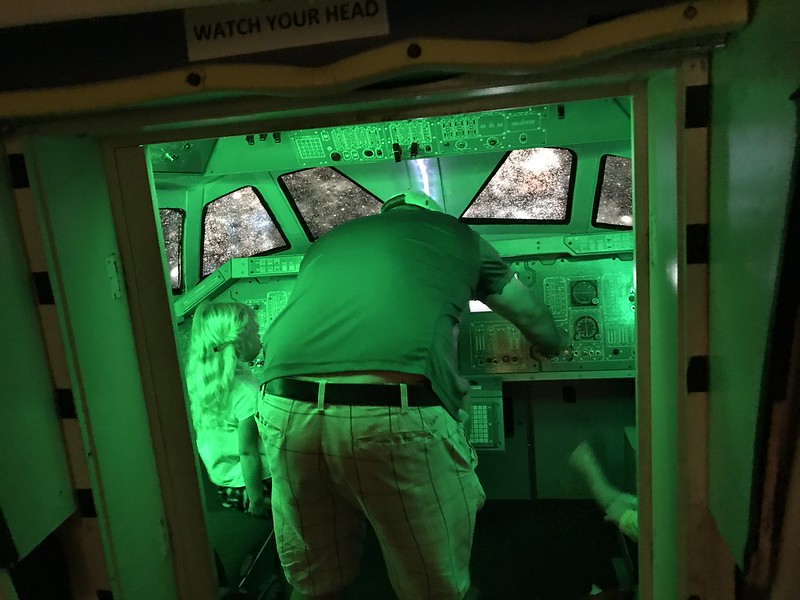 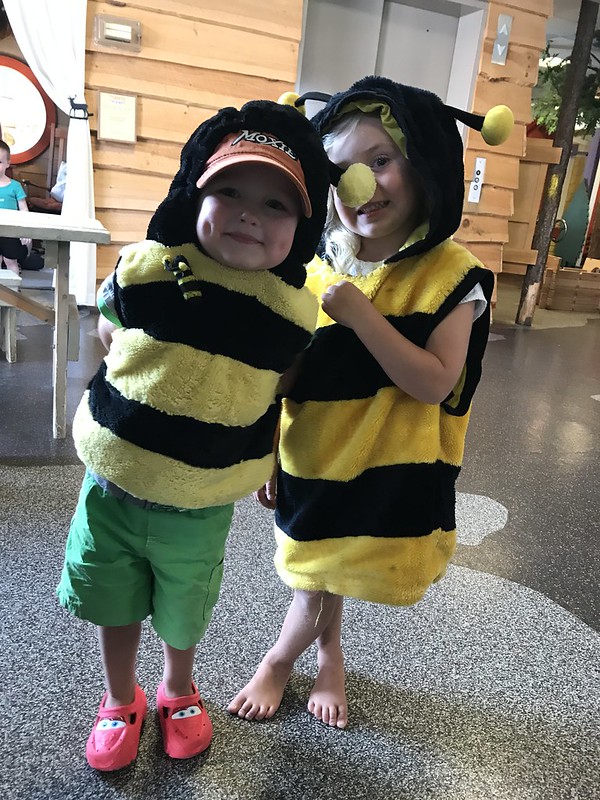 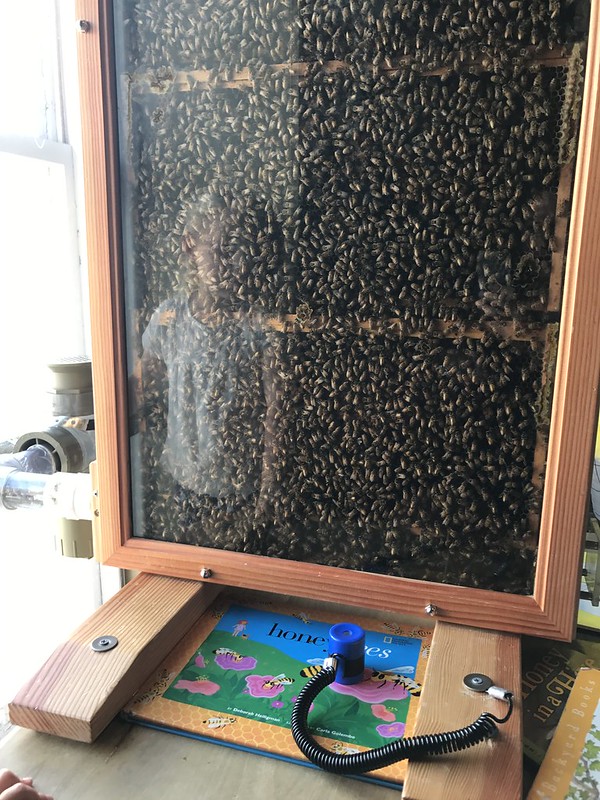 I found this stuff in a gift store.  The paper is coated with a chemical that reacts with the UV radiation from the sun.  We made designs and talked about why it’s not ok to look at the sun. 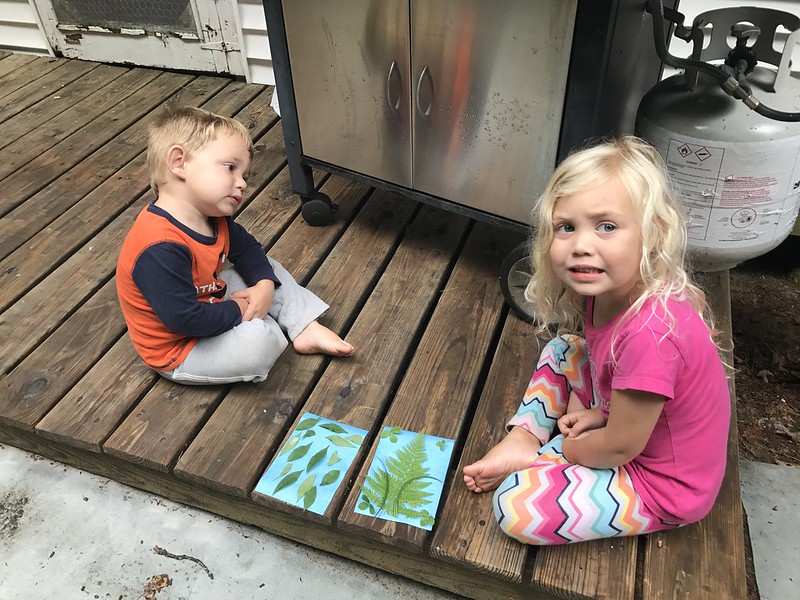 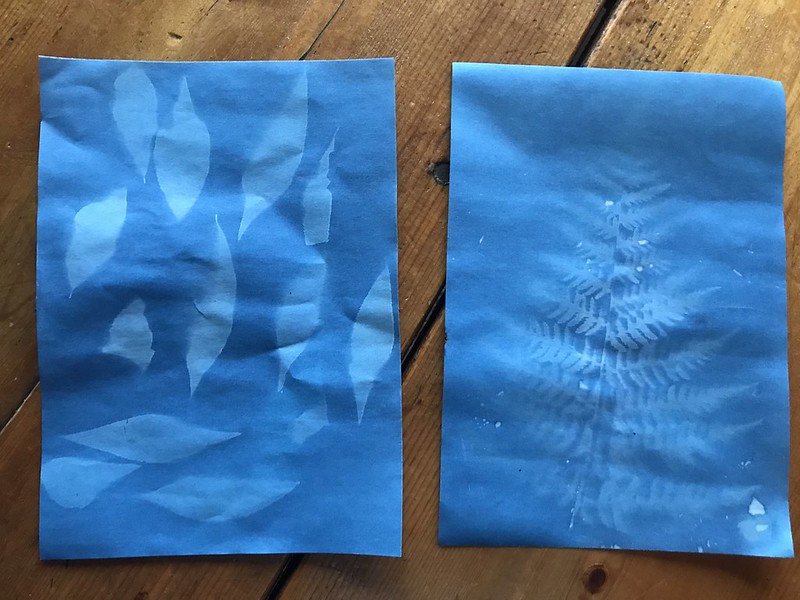 We’re slime connoisseurs. Somehow our fluffy slime recipe (glue, shaving cream, etc) has been a major hit on Google. I didn’t make it up…. so how I get traffic from it is mind-boggling.  But I’m not one to look a gift horse in the mouth.  We’ve been building on that… The latest iteration is magnetic slime.  It worked well for awhile. Then it started to harden.  Then the iron filings started falling out and got in Jack’s eye.  Then I threw it out. 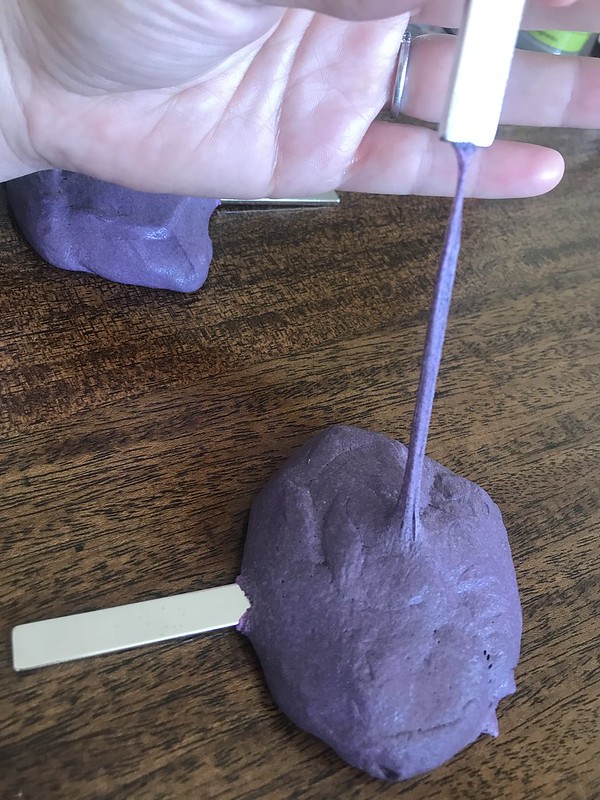 None of these ideas are exceptional.  The point is to do something regularly.  We make thinking fun.  The world isn’t getting 2 duds on my watch.  They’re going to be contributors.  Value added.  Self-motivated.  Who is John Galt, indeed?!

P.S. Best thing I ever did was quit my job and focus on my family!!  Love it.  Every day. This homeschooling thing is going to be epic.

We're currently in a campground.  It's a nice little co-op for Escapees members in Benson, AZ.  As far as I know it's not exclusively 55+.... but it might as well be.  That's fine.  We're used to being the weird young...

"I get how people get stuck in a place," Scott said to me.  I laughed. Me too - I get it. Most people don't consider having roots in a place 'stuck'. Having ties and feeling safe are generally considered good...