Evie has a toothache.  I looked.  Even I can see it.  She has a major cavity between 2 molars.  Of course, she does.  She has bad teeth genes on my side.  That should come as no shock… anyone who reads the blog knows that my teeth fall out regularly.  It’s a terrifying party trick and often something I know I should be embarrassed about but just can’t muster up the energy.

I called a couple of local dentists.

The first dentist wants to do a bunch of things and put a cap on at least one of the teeth.  The bill will come in around $2500.  I think this sounds like… insanity.  We’re clearly buying the Cadillac, not the Kia.  Mr. Dentist, come on back to Planet Earth, please.  These are baby teeth. No one has ever accused me of being Hollywood.  I don’t want to ruin her permanent teeth but I also don’t think we need to be excessive with baby teeth.

And let’s be clear, the Tooth Fairy pays $0.25 per tooth no matter what shape it’s in.

We got a second opinion.

I took her to a place that was a lot more… sensitive to the cost factor.  They proposed we extract the 2 teeth while Evie is under general anesthesia.  Then they want to put a brace in to hold the way back tooth in place until her 12-year molars come in.  What in the hell…??!??

The bill?  Not sure. I would have to first call an oral surgeon and then a pediatric dentist to figure that out.

Funny, isn’t it?!  At first, you rolled your eyes at the expensive cap idea.  Then, given the second option, the Cadillac solution now looks like it may be more like a Prius.  I can convince myself to invest in a green car for a little more than expected… maybe.

To make matters worse, I’m biased against the second dentist.  She is a wicked person who committed an unforgivable infraction against me.  I curse her into eternity.

When we in office #2, Evie went with the technician to get an x-ray.  She got a lot of attention because of her hair.  She received extra attention because a well-behaved, calm, rationale 4-year-old seems to be something of a rarity for the office.  When the dentist popped in to compliment Evie to me she started with a big smile and a friendly, “Mom or Grandma?” ….

What in the hell?!

Did she really just… Without skipping a beat, Me to her, “Mom,” {smile-that-doesn’t-reach-my-eyes}.  Her, “Your daughter is so…” Honestly, I’m not entirely sure what she said after that.  I think it was positive and kind.  I don’t know and I don’t care.  I was just asked if I was Evie’s grandmother.  Once more….

What in the hell?!

So here we are, an expensive first opinion and an unacceptable second opinion.  Do I go for a third?  These things are $200 a pop so a third isn’t ideal either.  We’re still deciding.

In the meantime, we’ve obviously stepped up our brushing/flossing discipline. I also bought some dye that stains plaque bright pink so we can see where we’re missing when we brush her teeth.  And to round out our efforts, both kids are now chewing sugar-free gum regularly (although I just read the label and found out Orbitz uses aspartame… oh the humanity… I thought we had an FDA to prevent this sort of nonsense). 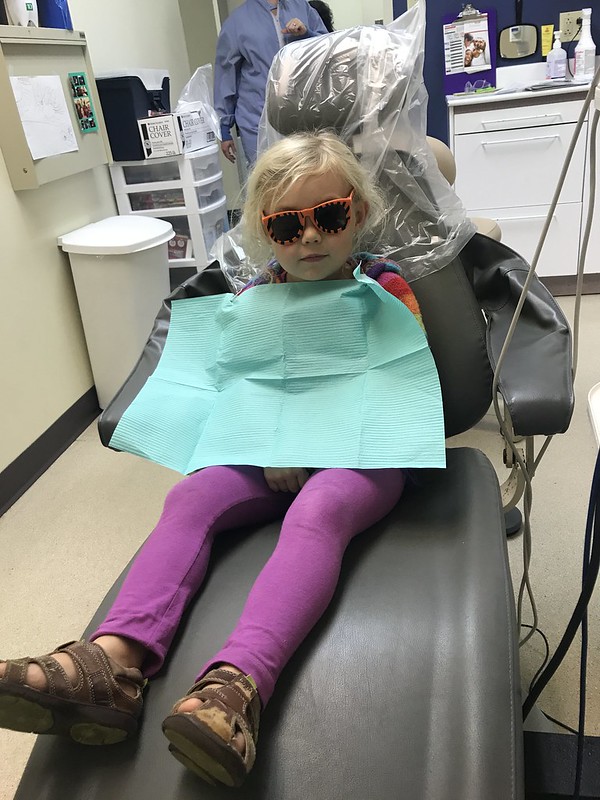 If you’re wondering about the plaque staining stuff (as I would be, if I were reading about it), this is it. I love it.  We use it every few days. (This is an affiliate link.)

Do you Smell that? Not Yet.