Navajo National Monument is located on Navajo Nation in northern Arizona.  It’s home to several cliff dwellings created by the First People.  I would have traveled out of way to see one but, as it turns out, the RV was parked about 1.5 miles from Ledge House (Bitátʼahkin) .  How’s that for good karma?

The Sandal Trail is a self-guided (or Evie-guided if you’re with us) walk down to an overlook of Ledge House.  It starts with some traditionally made huts.  Of course I wanted to go in, but that’s a non-starter in the LoR.  Interestingly, they used to sweat themselves clean.  I could do some of that right about now.

Anyway… fun, easy hike.  We ended up at an overlook (which is hiking-speak for a flimsy chain-link fence, maybe a foot of rock and then 300 ft of air).  I had a hard time at the end.  Scott leaned right over it.

The dwelling is really interesting in a museum kind of way.  Smartly they keep everyone on the opposite side of the canyon so you can’t get up close and personal.  I’m glad we saw it.  The kids got an interesting lesson in human migration and the native people. 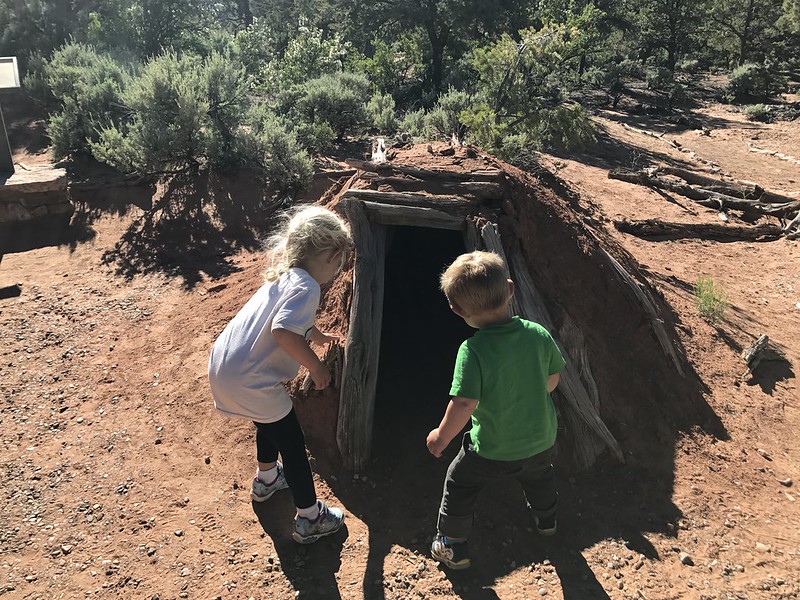 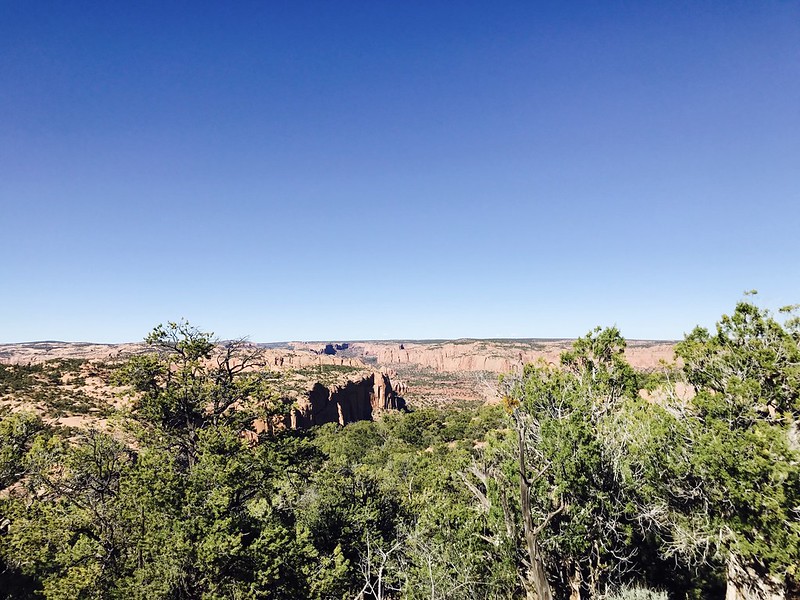 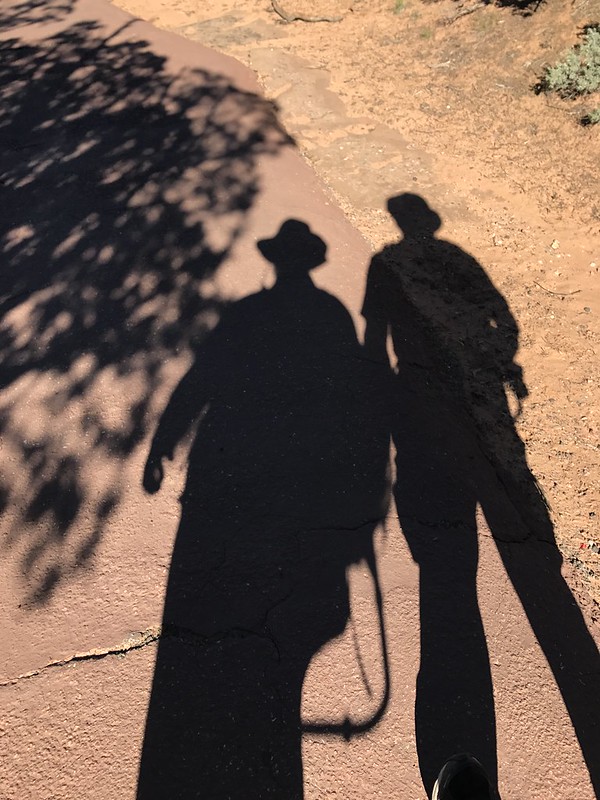 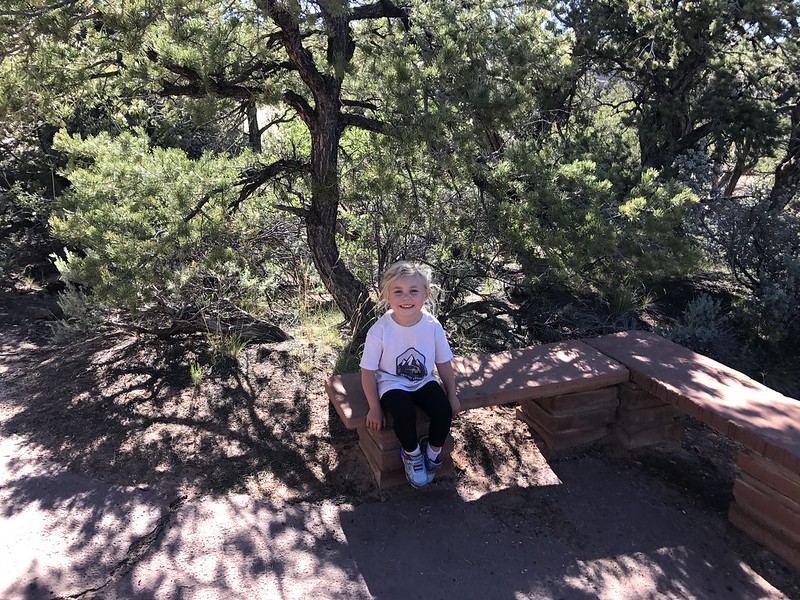 The trail had some surprising pops of color. 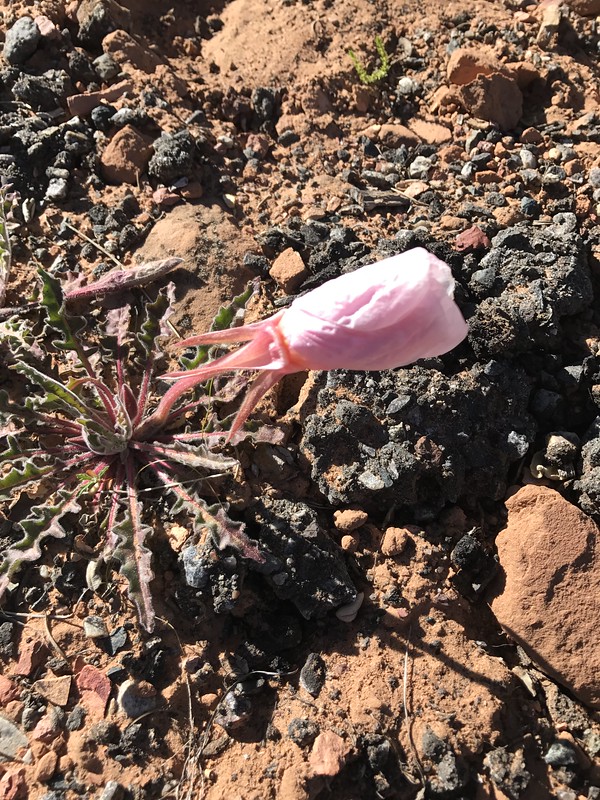 See the dwelling in this one?  I know where to look and it’s almost impossible. 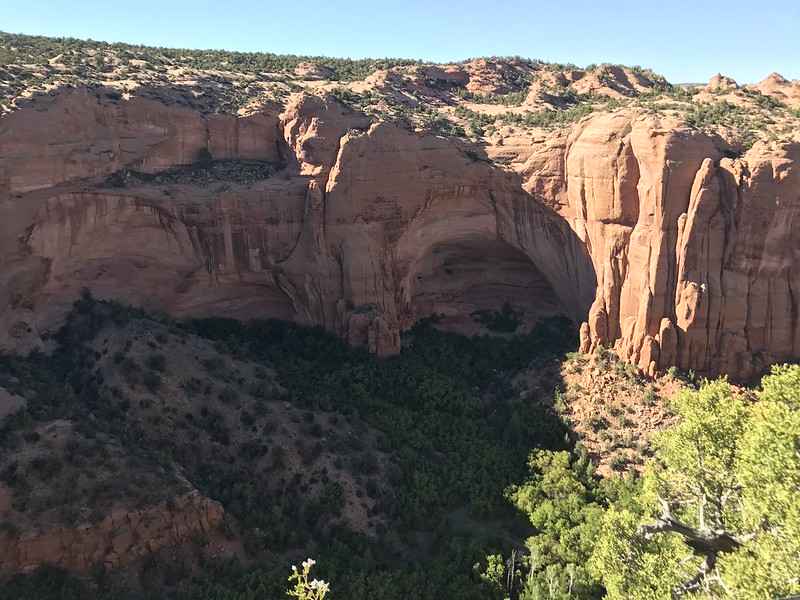 If I remember correctly, in its heyday it had about 120 rooms.  Much of it is still intact.   As the story goes, the inhabitants left after a 20-year drought.  They took the lack of water as a sign it was time to move on…. but they always expected to return.  They left if fully stocked for themselves.  I understand that Native Americans still think people from this pueblo walk among us and they anticipate that they will return to it one day.   It’s a ‘maybe’ from me…. things would have to get pretty bad for the national park service to green light squatting in this place. 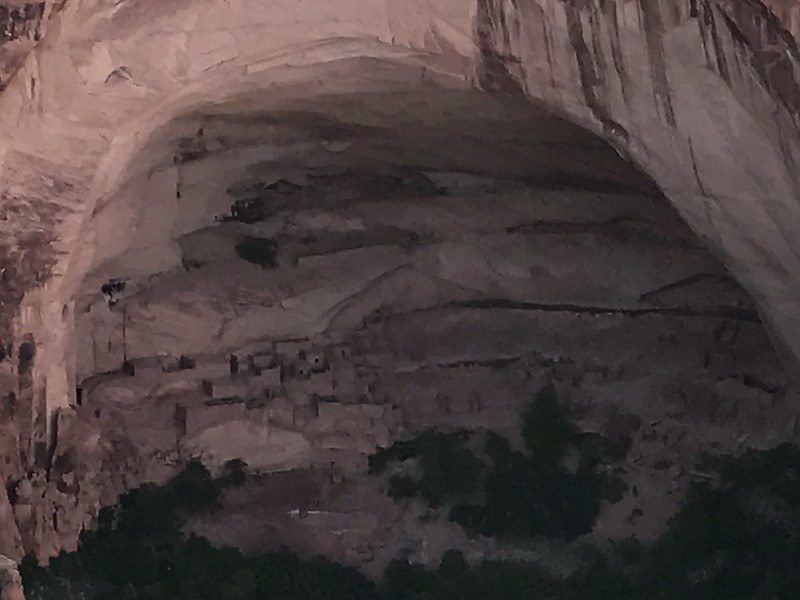 south-facing locations in canyons to take advantage of warming in the winter and cooling in the summer.  School time. 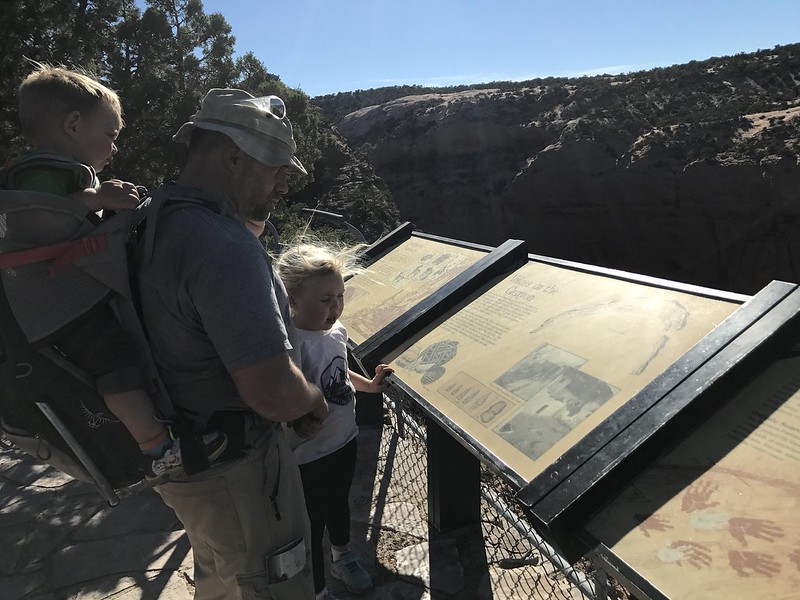 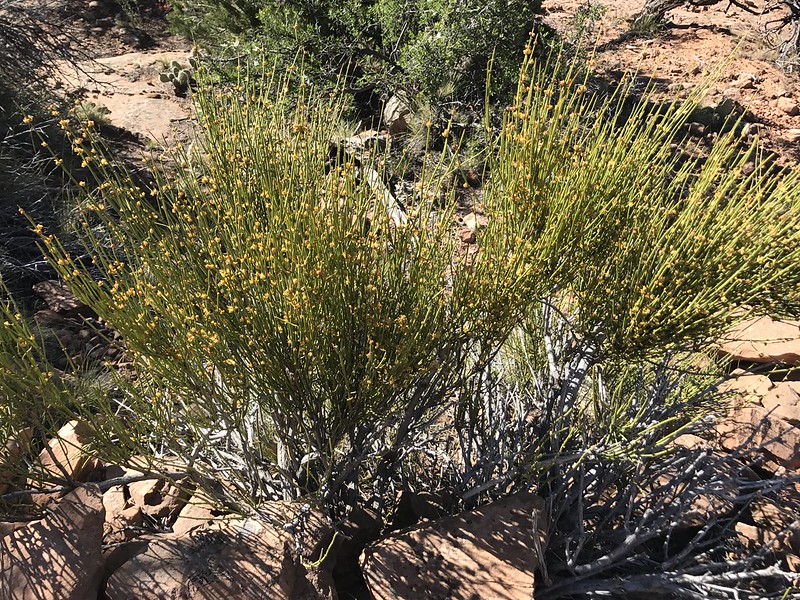 More dinosaur footprints.  I love finding these things.  It makes dinosaurs seem more real (which is 100% not to suggest I don’t “believe in them”… that gets a ridiculous size eye roll from me). 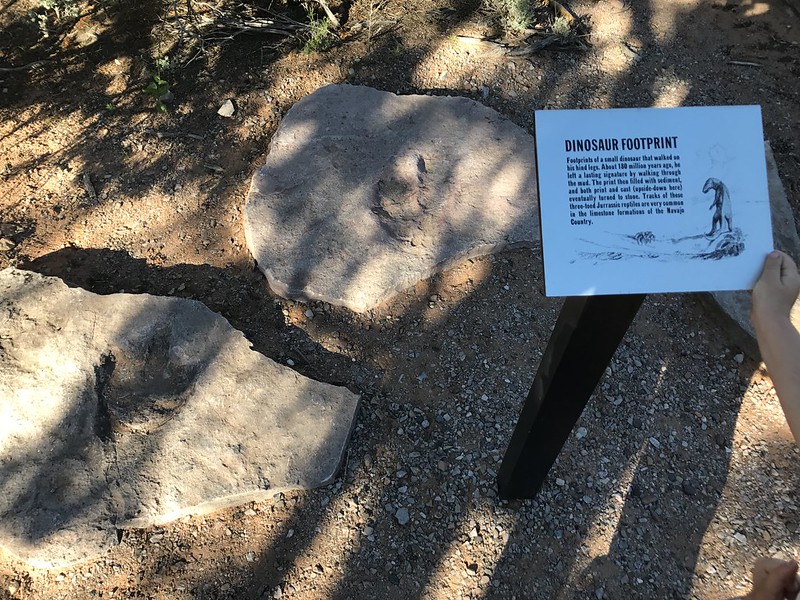 Back at the RV, Evie stole my camera again. (photo credit: Evie) 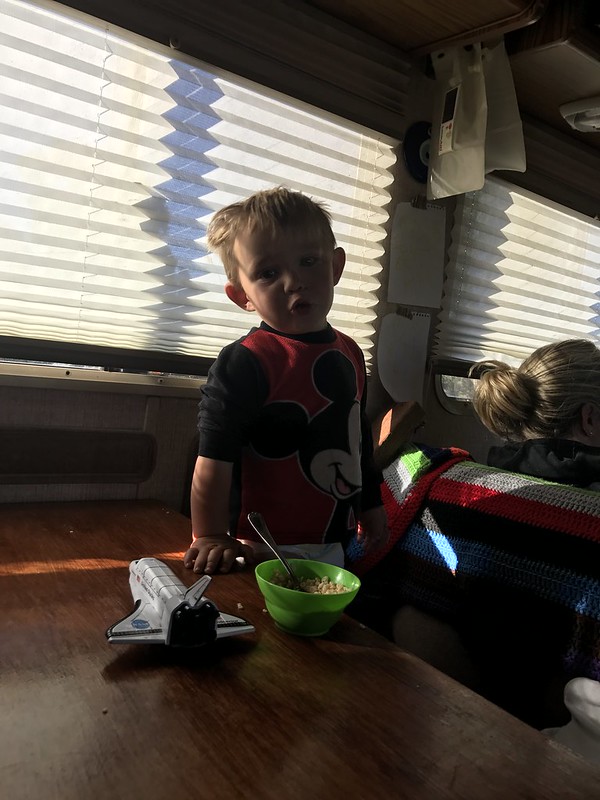 I look like my dad in this photo (not an entirely flattering thing to say being that he was a very masculine, very man’s man kinda man and decidedly not pretty {but I still get a kick out of it}). 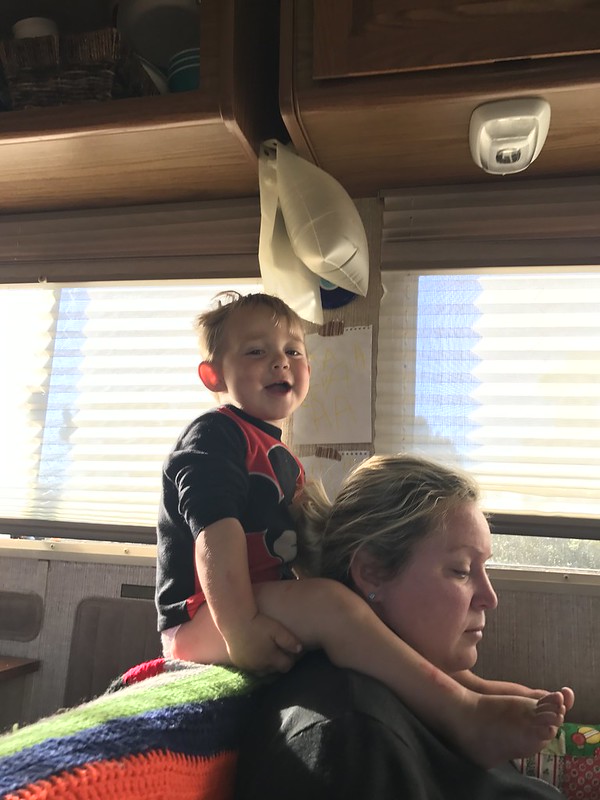 I wish we could spend more time in the Four Corners region.  It’s fascinating (and very very dry).

Traci’s picks (may include affiliate links but it’s all stuff we use, no one paid me to say this):

It's never good when you hear, "Ka-chugga....{heart beat  heart beat}  ...bang," as you're driving down the road.... not like a minor explosion, more like someone swinging a baseball bat into the undercarriage of the RV.   We pulled into the...