Making our way through southern New Mexico has been a trip!  We aren’t used to border patrol check points.  The first time we pulled up to one Scott had no idea what was happening and neither did I.  We alternated between, “In America?!?!!?” and “This doesn’t happen in America… this could be a trap.  Be ready for anything.”  Just in case… I went on a search of our passports.   If you had been a border patrol agent, through the windows you would have seen me tossing the RV (in retrospect – maybe not the right thing to do).

We pulled up, Scott and I smiling through the driver side window (me panting a bit with exertion).  A bored border patrol agent, “Are you Americans?”  Scott, “Yes.”  (I was preparing to ask for more time to find our passports…)  Agent, “Go ahead.”

Wait… that’s it?  You’re going to just BELIEVE us?  Now I am suspicious that this wasn’t a real checkpoint.  I know we’re pale but how do you know we’re not Canadians?!  If this is what ‘they’ mean by “porous border”…. they may have a point.

From Las Cruces we headed north up to see White Sands National Monument.  What a fantastic find!  I had no idea…

We stopped in at the visitors center to get a bit of the science and lore of the place.  The sand is not sand but gypsum crystals.  Therefore it is always cool to the touch… so White Sands is actually fun to visit in the summer when it’s New Mexico hot outside.  There are creatures that brave the harsh conditions…. all of them white.  There’s even some fish that are only found in 4 pools of the monument that are perilously hanging on to life. 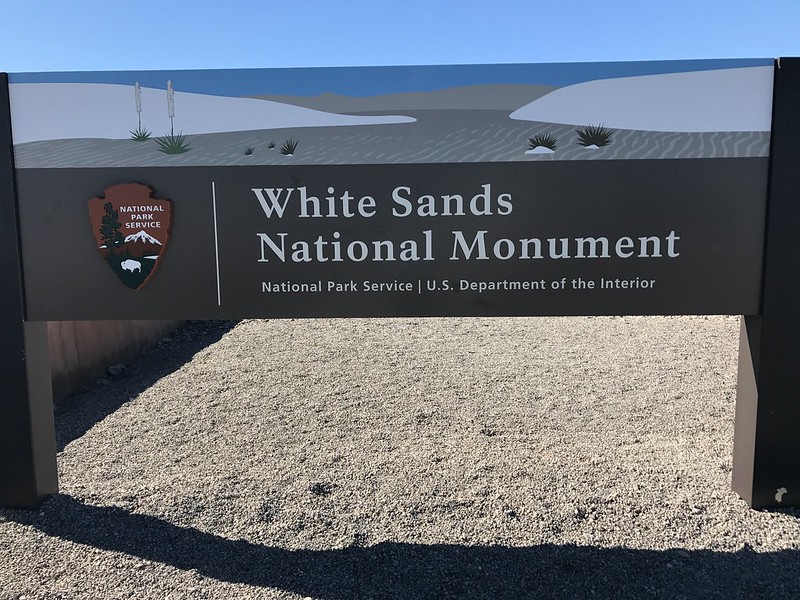 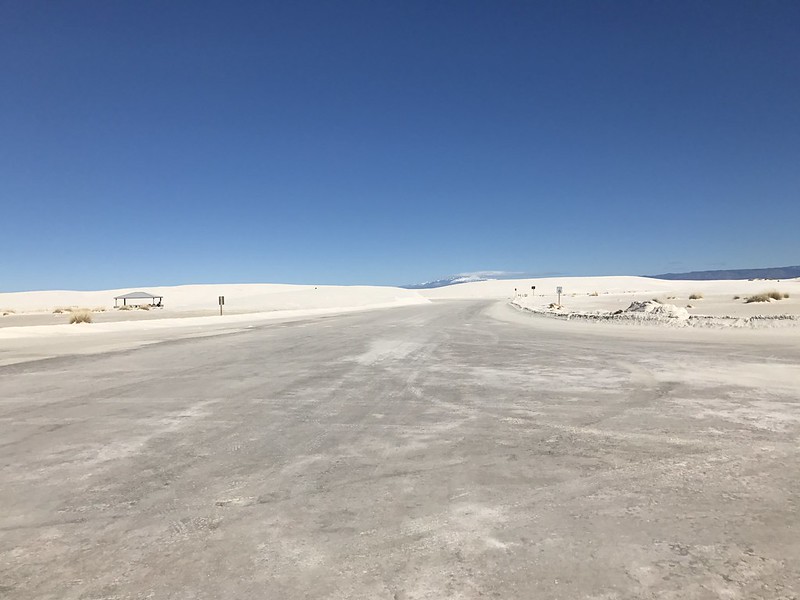 Then we bought a sled and headed out.

This place is just too much fun.  It’s like playing in snow without the annoying coldness.  We waxed up our sled and found the steepest dunes we could find.  The kids loved it… although Evie was not terribly excited about how hard it was to climb the dunes.  The sand gives way under your feet so it took some real effort to get up them.  Jack gave up and insisted on being carried.  It was an awesome workout day for Scott and I. 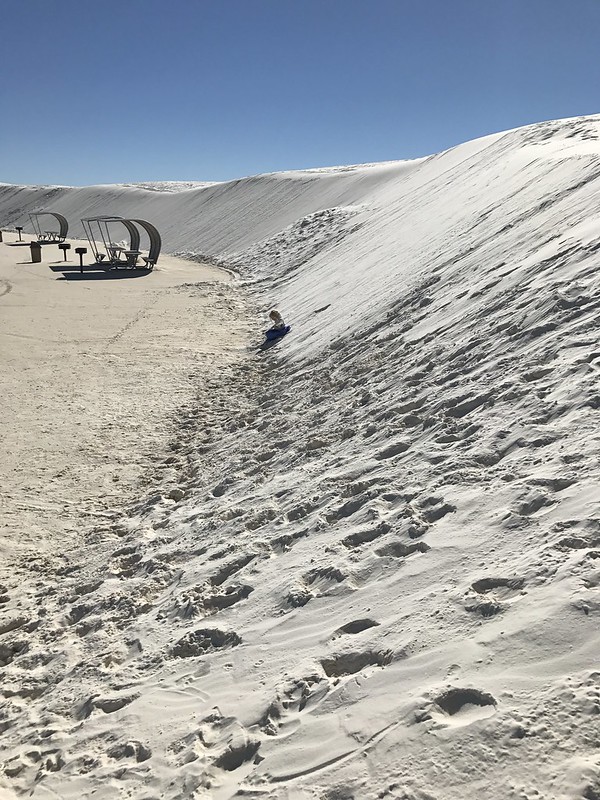 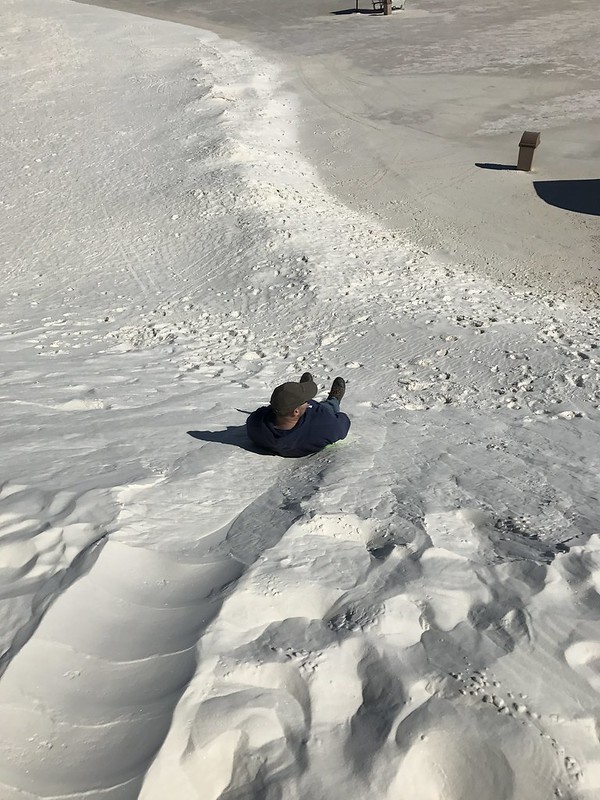 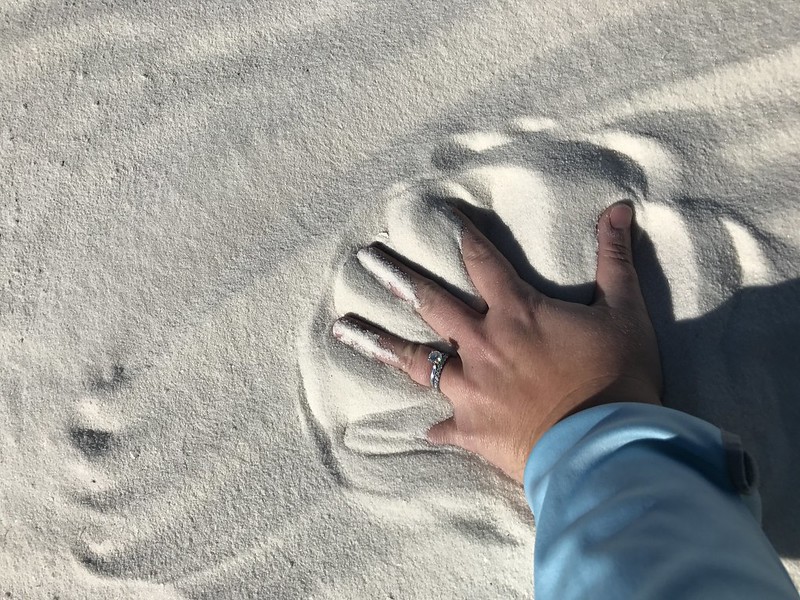 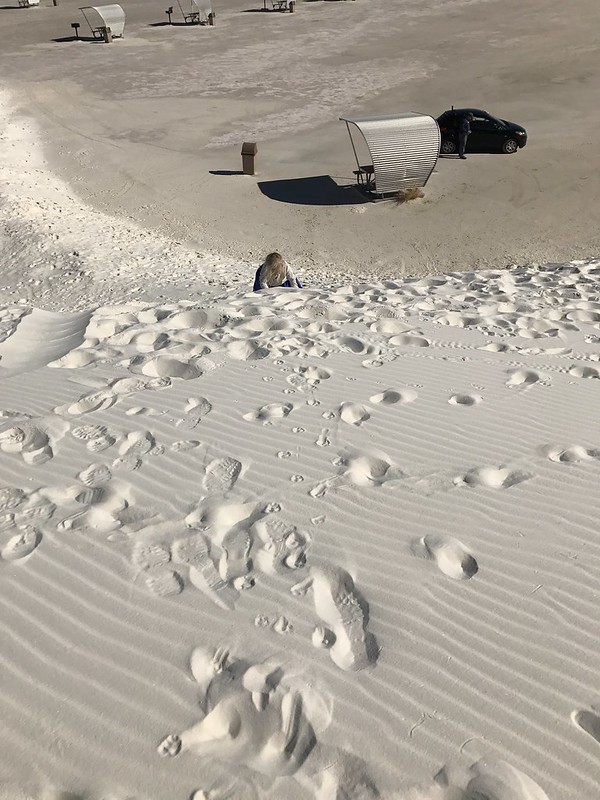 Note the snow capped mountain in the back: 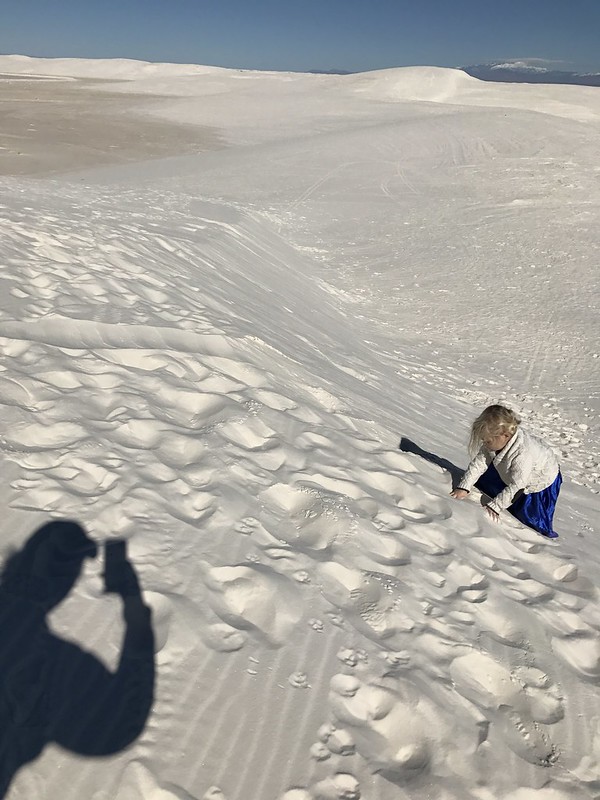 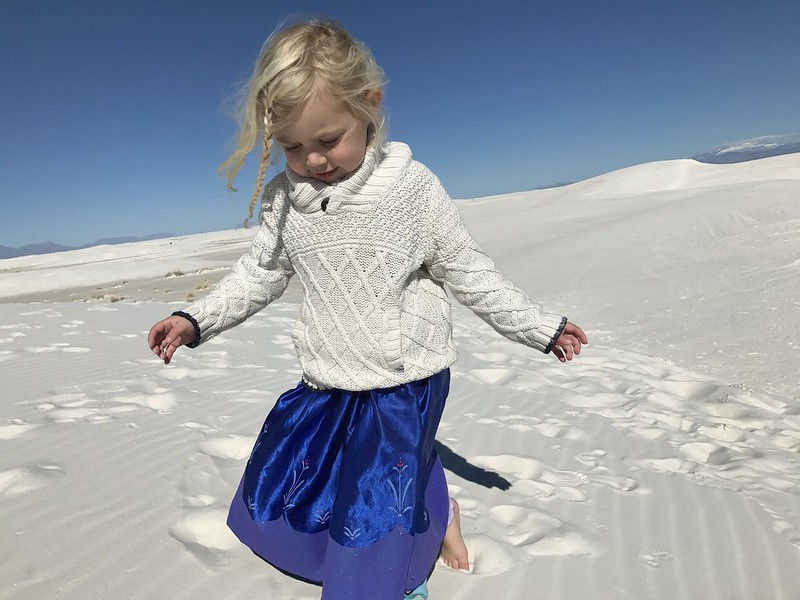 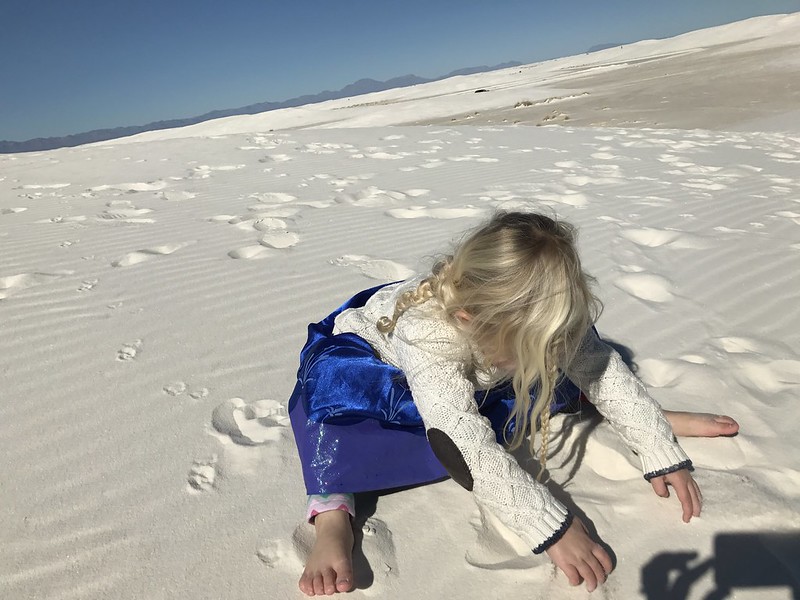 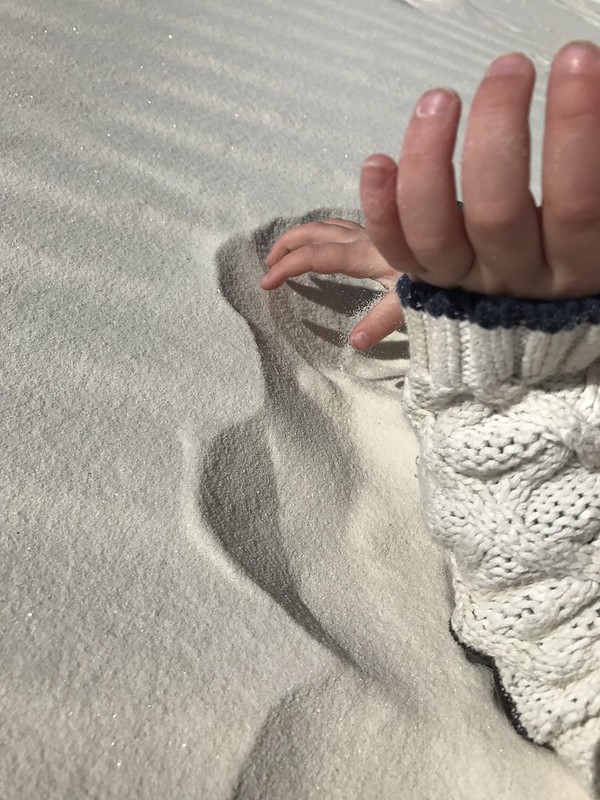 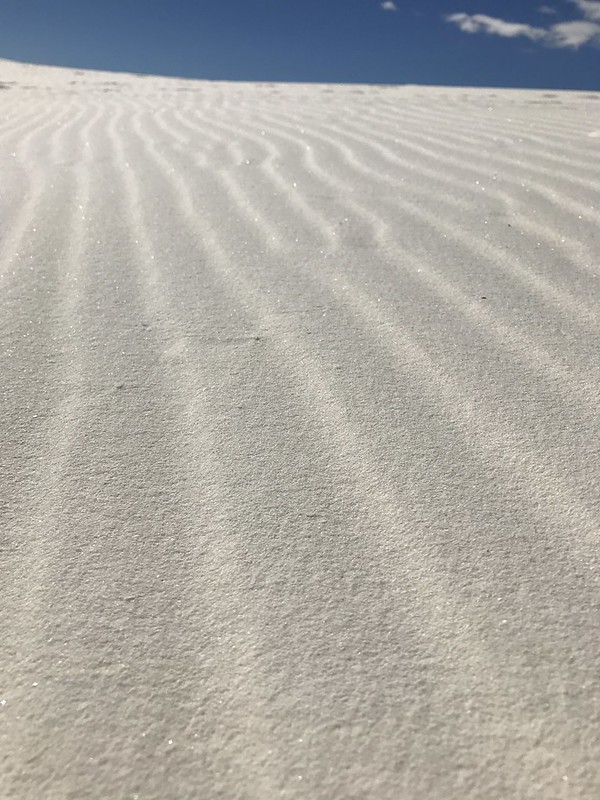 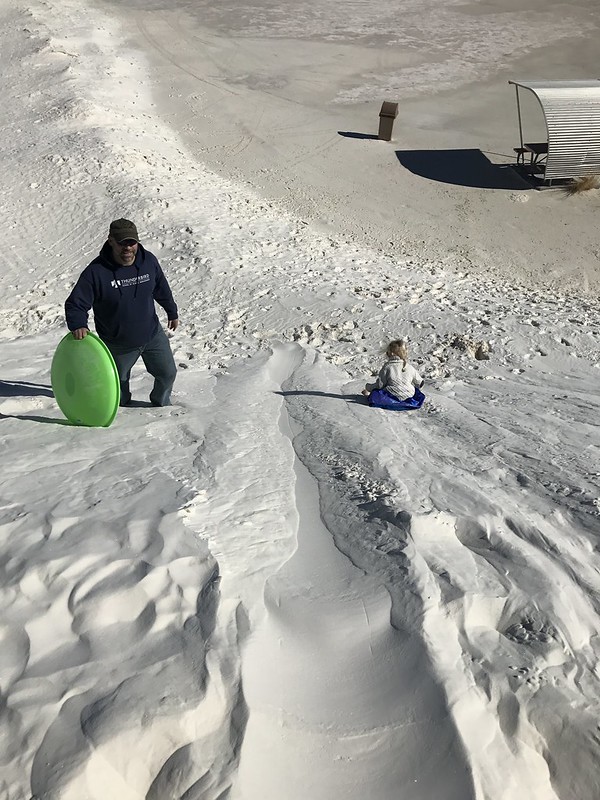 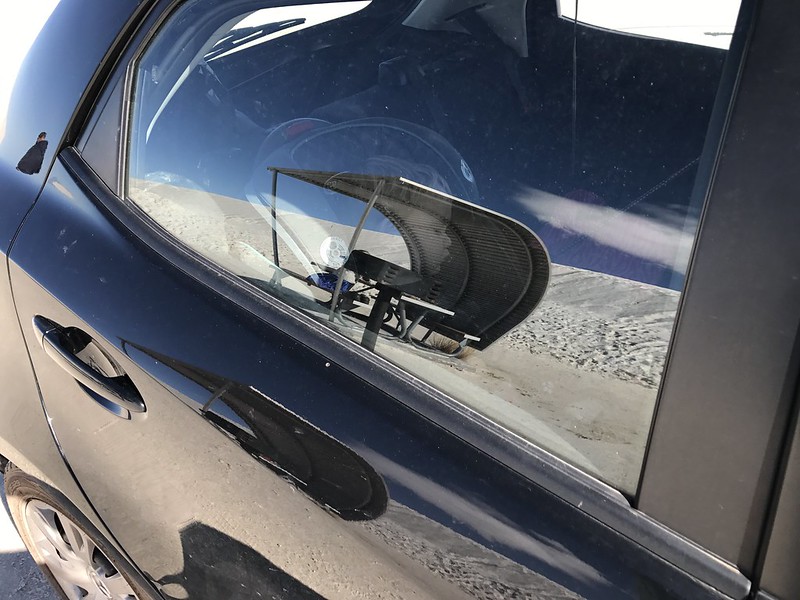 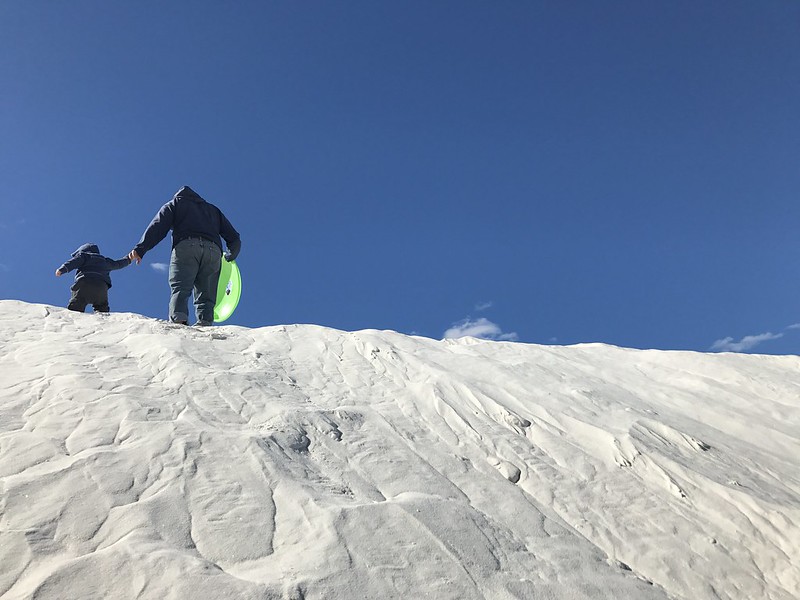 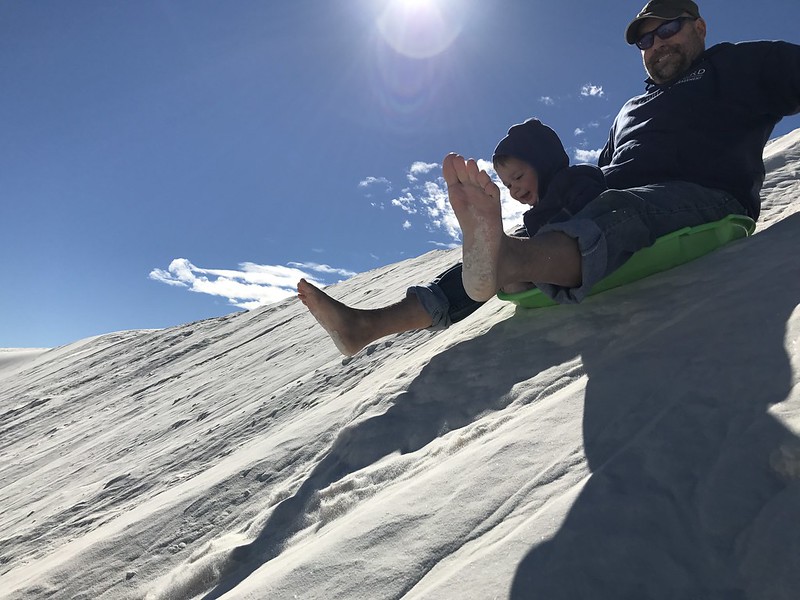 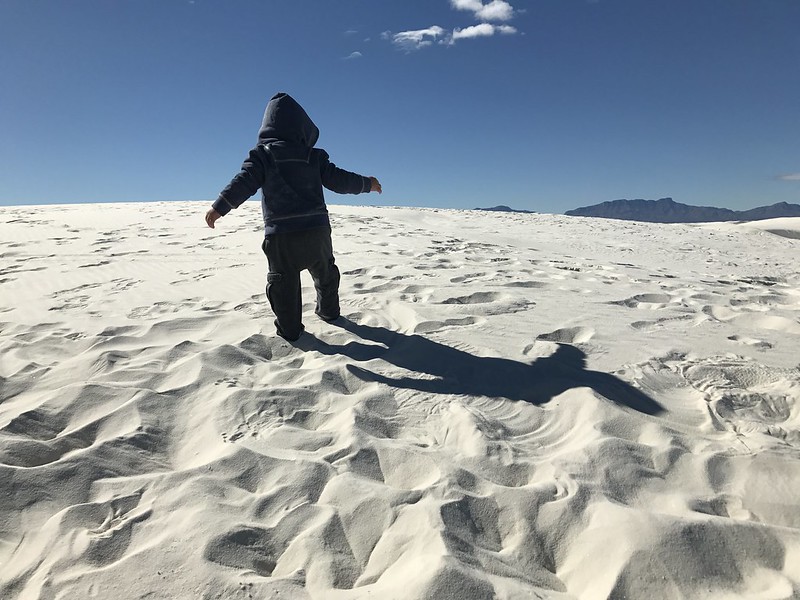 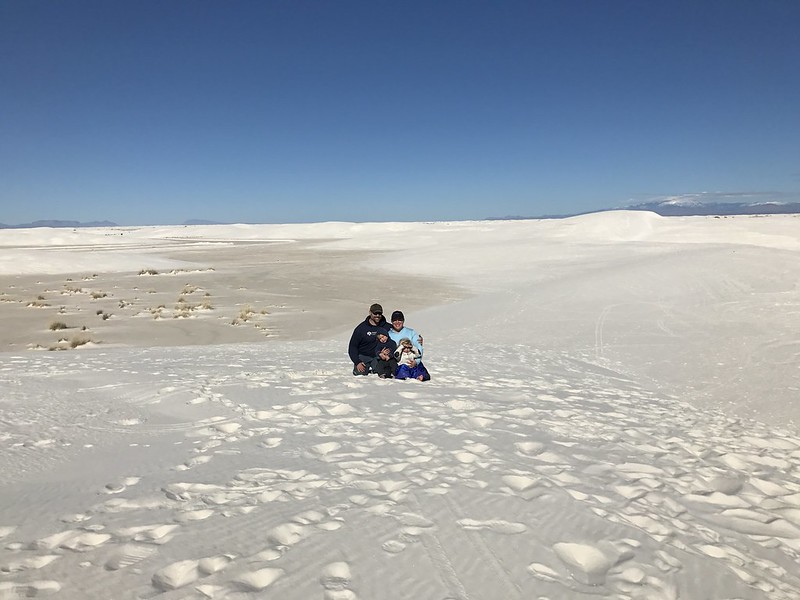 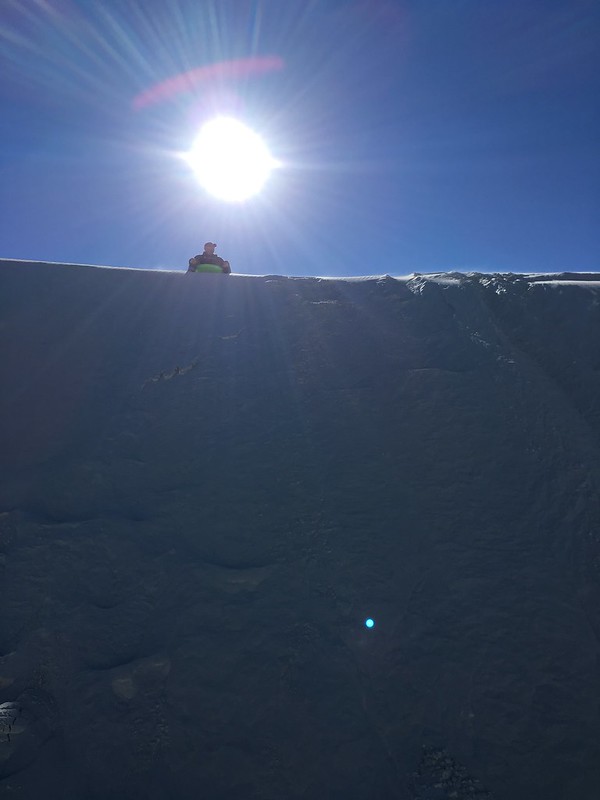 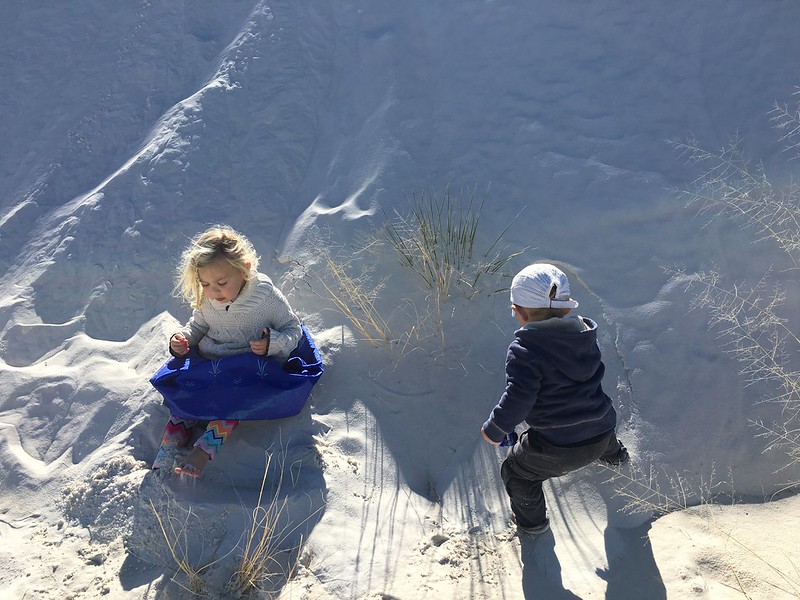 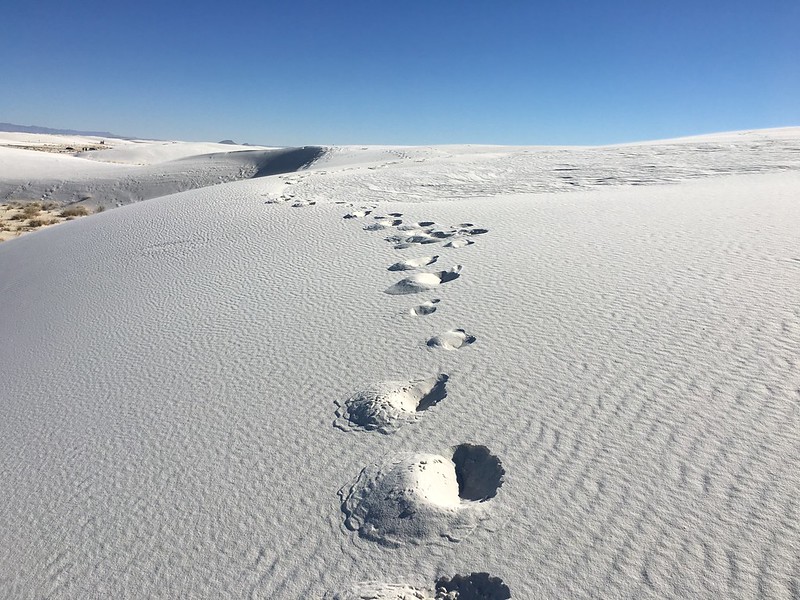 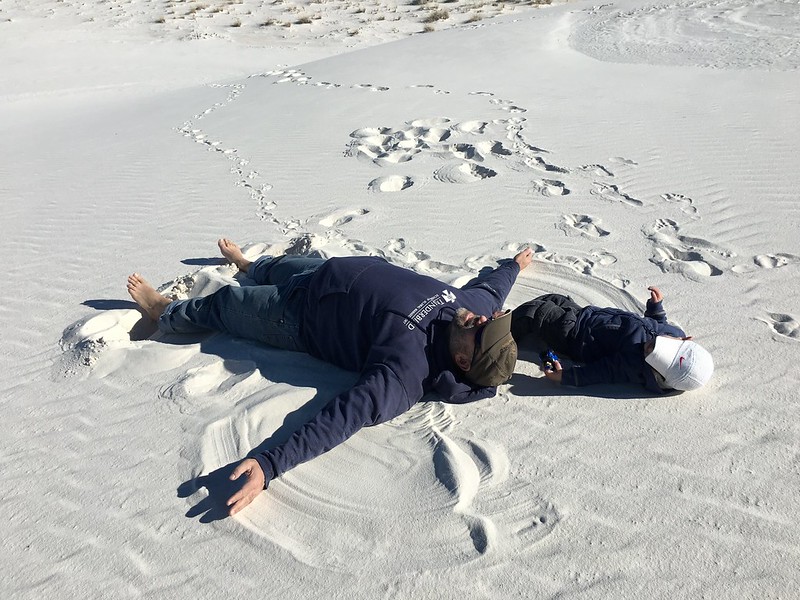 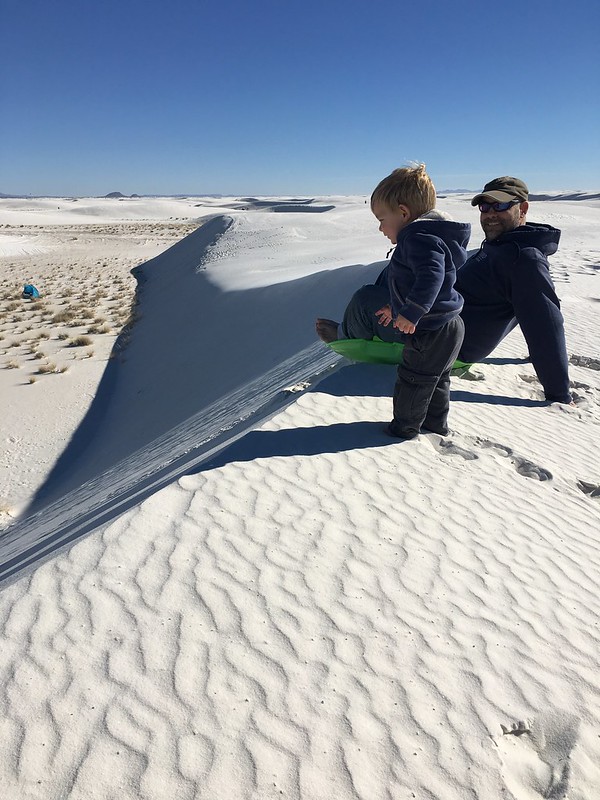 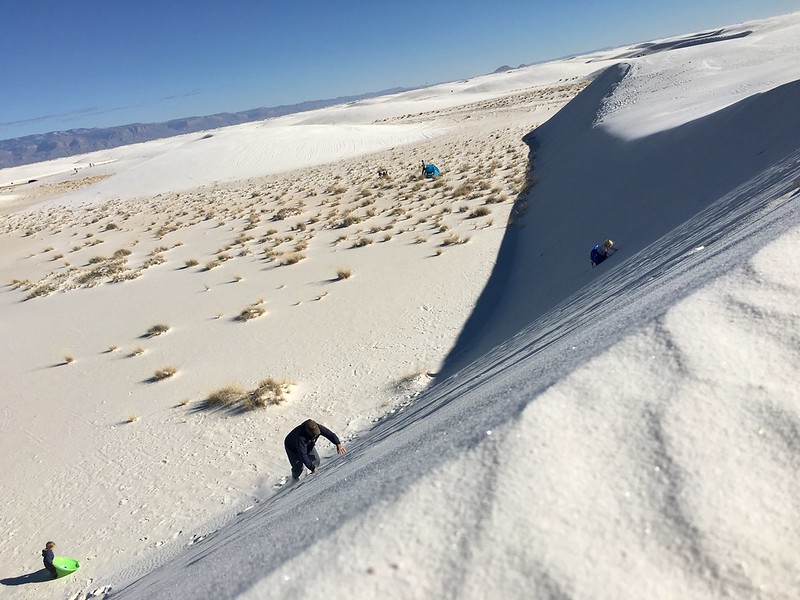 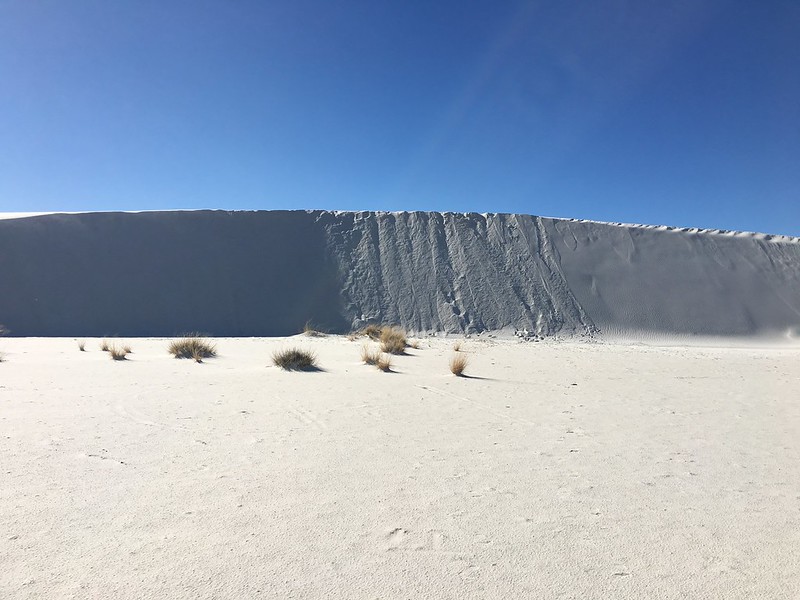 We took a break back at the RV and returned to the park to watch the sunset. You might have seen the live video we put on Facebook.  It ended abruptly not because the sun was behind the mountain, but because Scott’s phone died (just in case you were wondering). 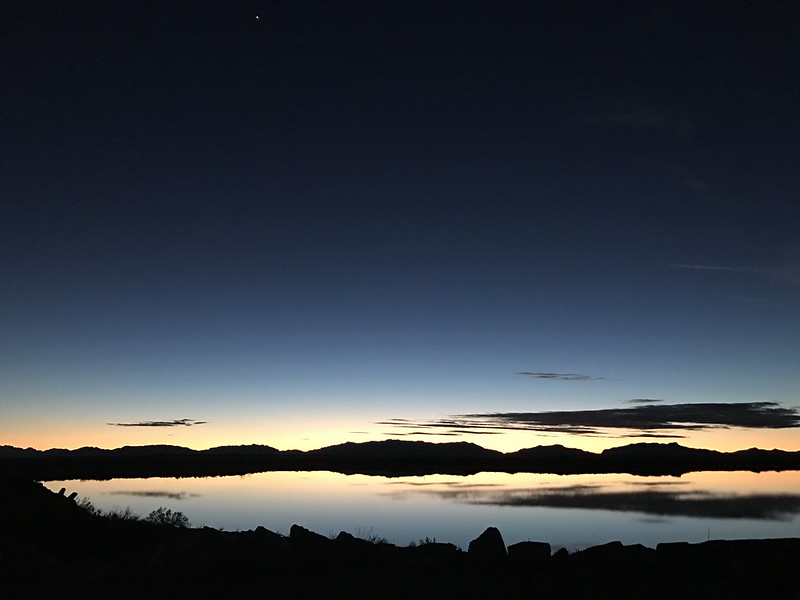 While I had a grand itinerary planned that took us over to Roswell then on to Carlsbad to see the bats leaving the caves in the evening… all that got nixed in the span of a 2 minute conversation.  Scott, “I’m cold.”  Me, “Yeah… me too.”  Scott, “The kids aren’t playing outside and I don’t blame them.  I want to see this stuff but maybe we can do it later.”  Me, “Agreed.  Let’s go.”  With that… we packed up the RV early and took the most direct route to Texas.

P.S. Thank you Cindy & Fam for an awesome dinner!  It was delicious… and so much fun to spend time with all of you!  This was all gone within 24 hours….  ;( 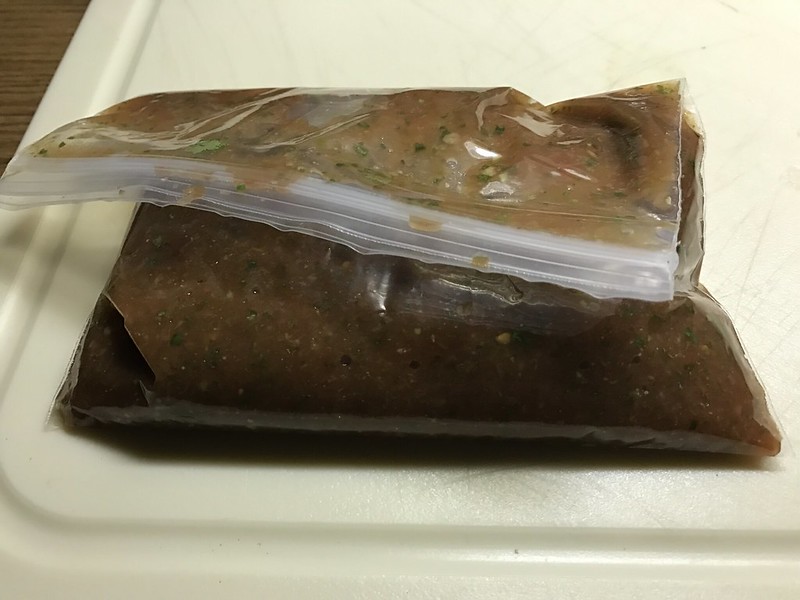 Mike and Ellen - I’m thinking of you guys as I write this one.  If When you get serious about that wild hair and decide to strike out across the U.S. in your RV, I thought some of our numbers might be...

Mom didn't realize it at the time, but our overnight at Harris Ranch was the last night she spent in the Chief.  It turns out.... despite not being able to shower daily and wash her hair every Tues and Fri...