Scott to me, “I don’t know what it is, but my feet hurt.  The salt in the pool is stinging for some reason.”  Me, “Oh, I know what it is!  You’re cutting your feet on the tiles.”  Him, “Come again?”  I pointed to the signs posted every 3 feet around the pool: TILES ARE SHARP! BEWARE! ONLY USE THE LADDERS TO EXIT THE POOL.  In general, I’m a rule follower.  My feet were fine.  In general, Scott is not.  But more to the point: what kind of a Beetlejuice pool has sharp glass edges?!

I’ve been trying really hard to keep costs down this month.  I’m self-imposing the bird disease – cheap cheap cheap.  We’re staying in cheap(er) hotels, using cheap transportation and avoiding anything that looks like it was plucked out of the western world.  This isn’t Disney.  I want the real deal.  Authenticity.  It’s local time (and I want to pay more like a local too).

That’s how we regretfully came to stay at a true hole-in-the-wall – a $10/night hotel room.  The take away from this experience: sometimes frugal = more expensive. (So true, Rick.  So true.  Lesson internalized.)

I knew it wasn’t going to be “nice”.  I was prepared for cramped and a little darker and maybe not spotless.  But I thought we’d give it a try because the pool looked like one of the best in Chiang Mai and that’s really saying something.  It had a water slide and diving board!  I can’t remember the last time I played on a diving board.  Insurance killed those suckers in the US decades ago. The restaurant also got high marks for good cheap food.  I can’t speak to that really – I drank during our entire stay.  {Kidding… just kidding… a little.}

We checked in for 3 nights.  The people were lovely, kind and friendly.  They adored the kids and gave them fruit treats and braided Evie’s hair.  (Yes, even in Thailand people think I don’t brush it enough.  Some things are universal.)

We got room 201 and were told how to find it: up a flight of stairs and down a long dark hallway.  At the very very end of the hallway was a wall of wrought iron bars (beyond which the hallway just stopped, an unfinished ledge with nowhere to go, looking out over the pool – perhaps a miscommunication with the architect?!).  Anyway, it wasn’t a gate.  It was a wall.

Trying to be cheery, our first impression wasn’t horrible.  It had 2 beds – a queen and a single.  The weird rubber headboard and the poorly plastered giant hole in the wall next to the big bed were off-putting (but generally ignored).  I could work with the space.  There were some things I could do to make us more comfortable.

In the bathroom, however, I mistook the bidet hose for the shower head.  That is what I call a clue… when those things aren’t obviously different, it’s bad juju.  Strike 1.

We decided to get right down to the pool.  Swimming is always a great antidote to not having fun.

On TripAdvisor several people noted the sharp pool tiles.  I was prepared to keep an eye out for a sharp tile or 2 to make sure the kids avoided them.  Plus, there were those helpful signs about the ladder.

Some backpackers were already down there.  We all got in and had fun on the water slide and the diving board.  Jack’s big toe got knicked.  Ok. Then Scott noticed his feet were covered in maybe 10 cuts and slices.  Then the backpackers got straight up ugly gashes on their feet and legs.   Time to get out.

Upon further inspection, the “pretty” pool was lined with glass tiles.  Along with forgetting to finish the hallway, those silly builders also forgot to buy grout.  That must have been years ago.  Each and every square was chipped along the edges.  The tiles were literally unfinished razor sharp glass edges.  We were essentially swimming in the pool from hell.  Strike 2.

Late that night Jack woke up screaming with growing pains in his legs.  It happens sometimes.  Not much helps but rubbing his back and letting him cry.  I finally got him calmed down.  Then he started a fresh round of screaming in his semi-sleep about monsters in the room.   Sometimes he worries about monsters.  My first thought was to dive for my flipflops – there must be roaches.  I started to convince myself I was seeing monsters.

Once everyone else was back to sleep, I just couldn’t shake this weird horrible feeling.  It wasn’t about roaches.  It wasn’t about anything exactly.  I can’t explain it in a way that makes sense.  It felt… ugly… like, “Best not to go back to sleep right now.  Just lay here, exhausted, and be awake for a bit.  Awake is aware.”   Well hello there, Gut, the VIP of my world.  I hear you.  I see you.  I feel you.  Strike 3.

At 3 AM that morning I made a reservation at a 4-star hotel just down the road.  I would have moved right then but I figured there must be some limit to arriving early.  We forfeited the $10/night for the last 2 nights on our reservation at Hotel Hell, paid $18/night at the new place and I was still under $30/night.  Mic drop.

It’s fair game for Scott to now accuse me of being picky/fussy/prudish.  I knew when I suggested he was being prissy, that was going to come back around to bite me.  I’m not immune to the wiles of western standards.  I accept the side eye.  It has merit.  However, in my defense, I will offer this final professional adult observation.  The security of the room was absolutely unacceptable.  All windows had bars on them.  No escape routes.  It was a 1-way hallway (as far from our room as it could possibly be).   In case of fire or worse, this is really the shittiest room you could design.  Also no fire alarms and terrifying outlets/switches.  Also, no one else appeared to be in any of the upstairs rooms with us (just plain creepy), internet from the hotel was non-existent in the room and cell service was poor.  If you wanted to arrange a death trap, this room would be a fairly reliable space.  I’m not the dumb girl in the horror movie.  I’ll sooner blow the budget, upgrade to a reasonable room and rework savings elsewhere.

All the other rooms in this picture are empty.  Our room is at the very end. 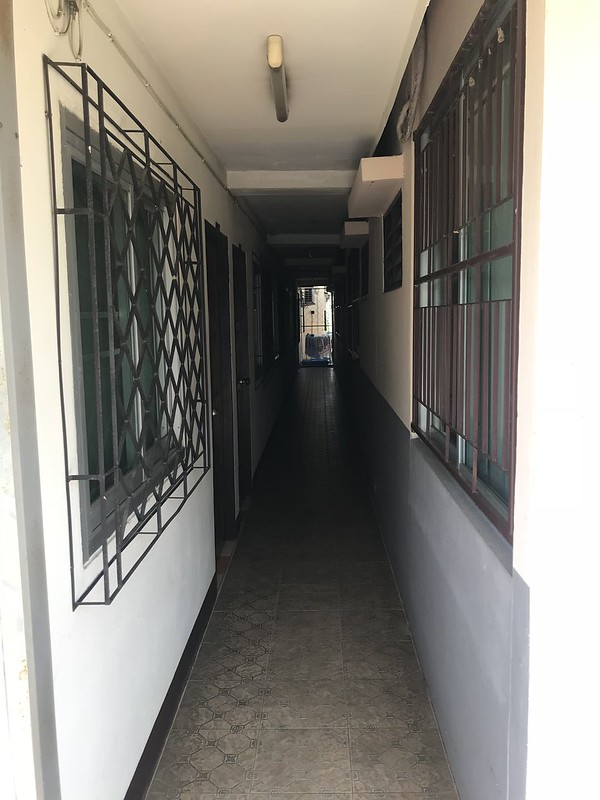 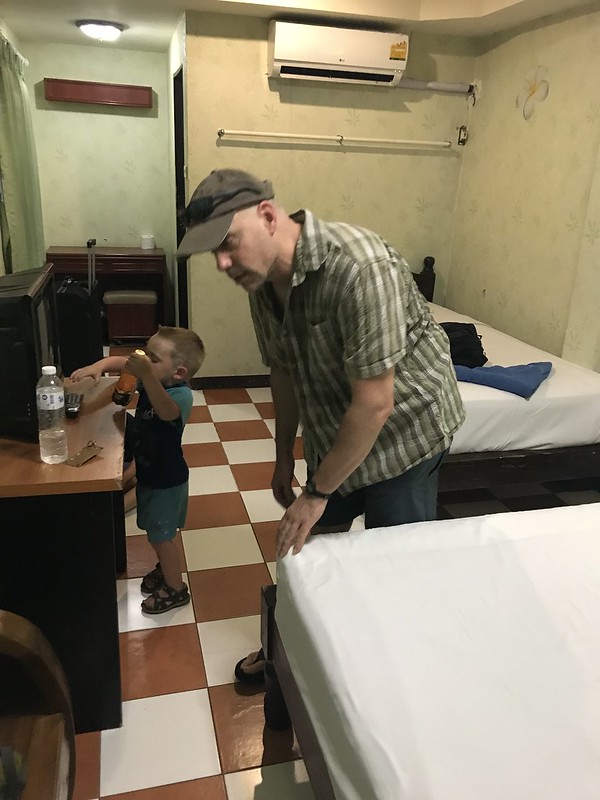 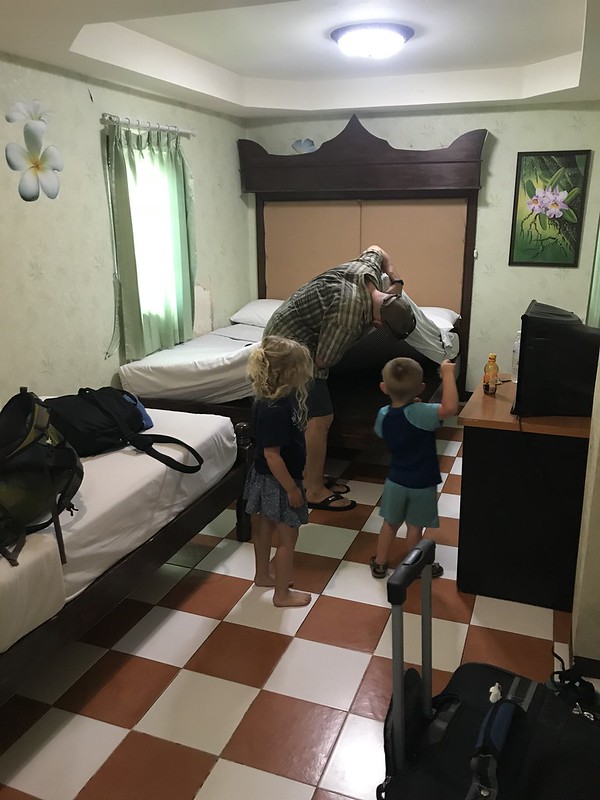 Yes, technically there is some sort of view of the pool.  But… 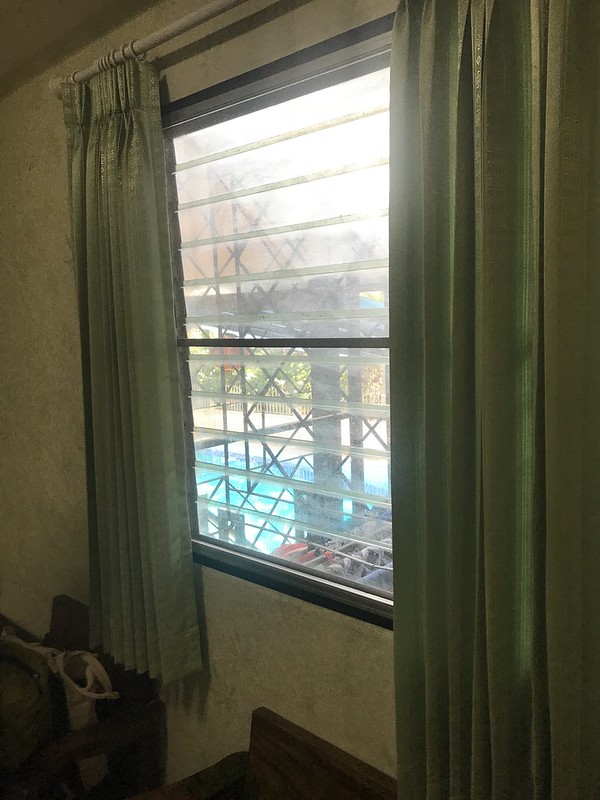 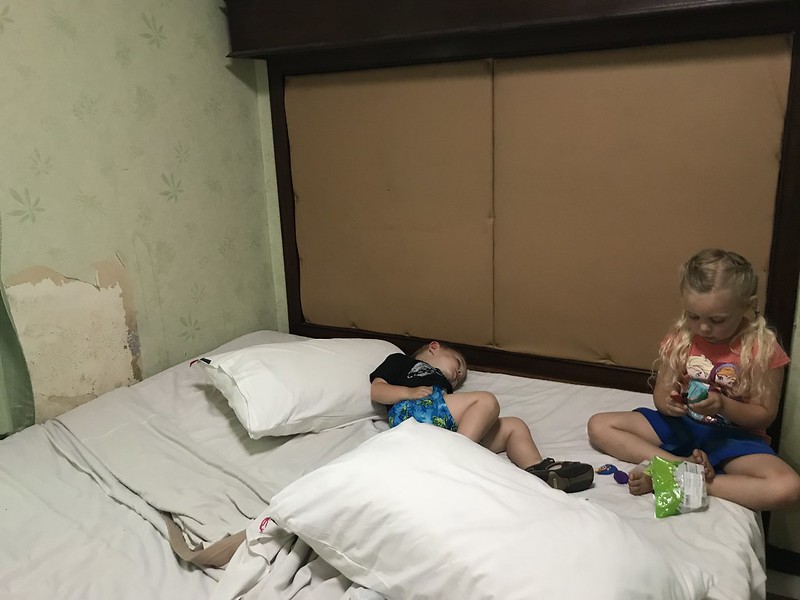 What is this nightmare scenario?!  Who would dare to throw that switch?! 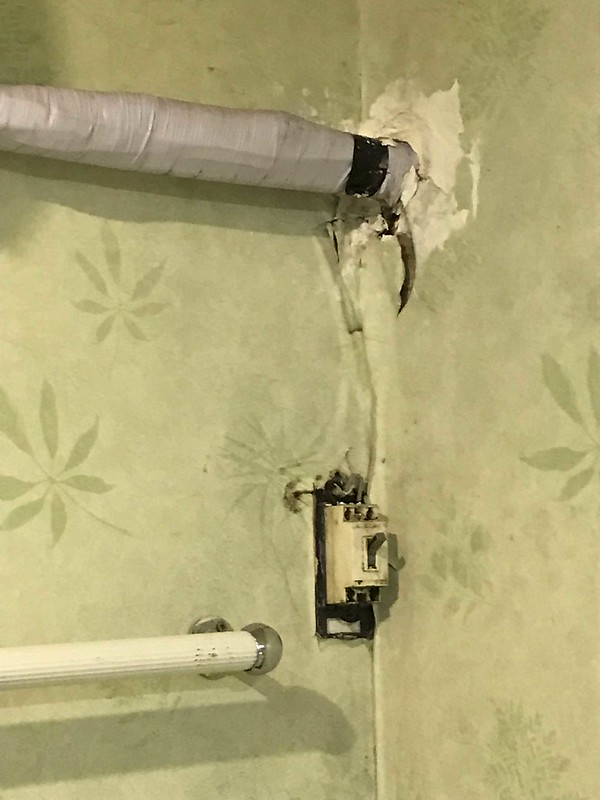 The Pool from Hell.  Pretty steep cover charge: 1 pound of flesh per person. 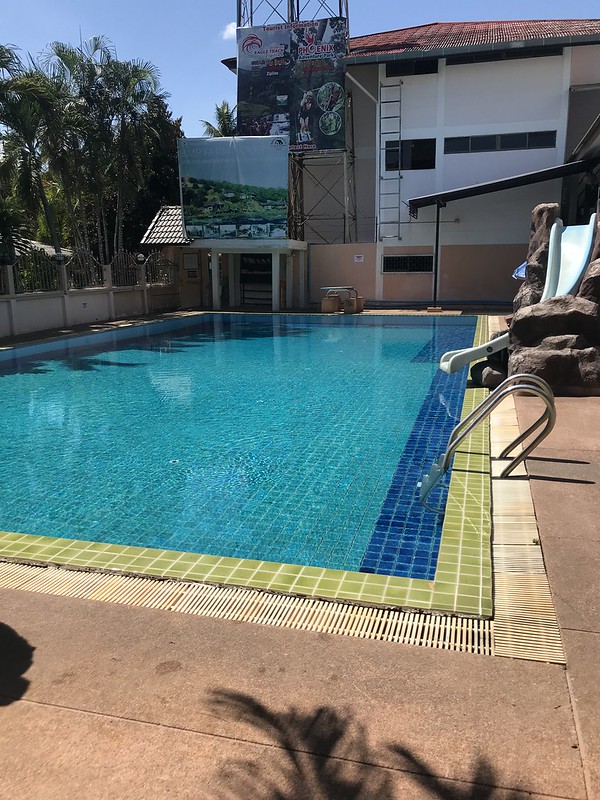 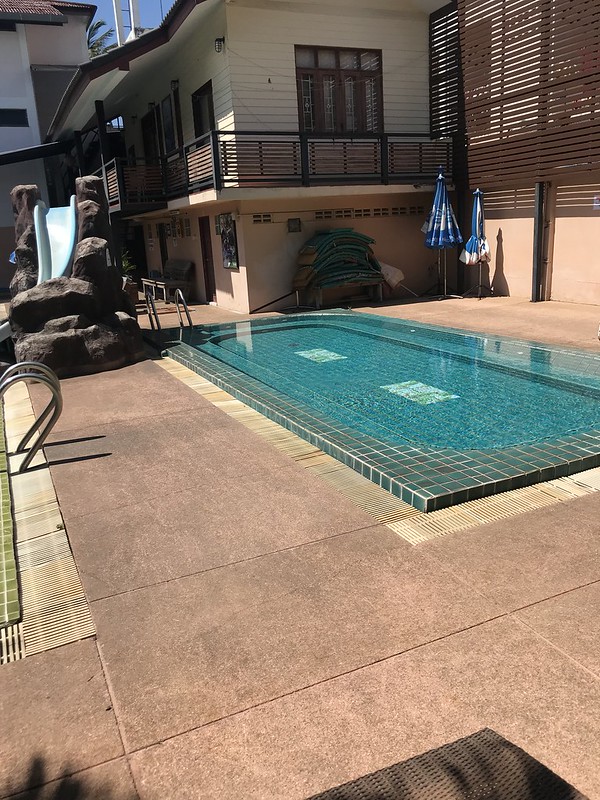 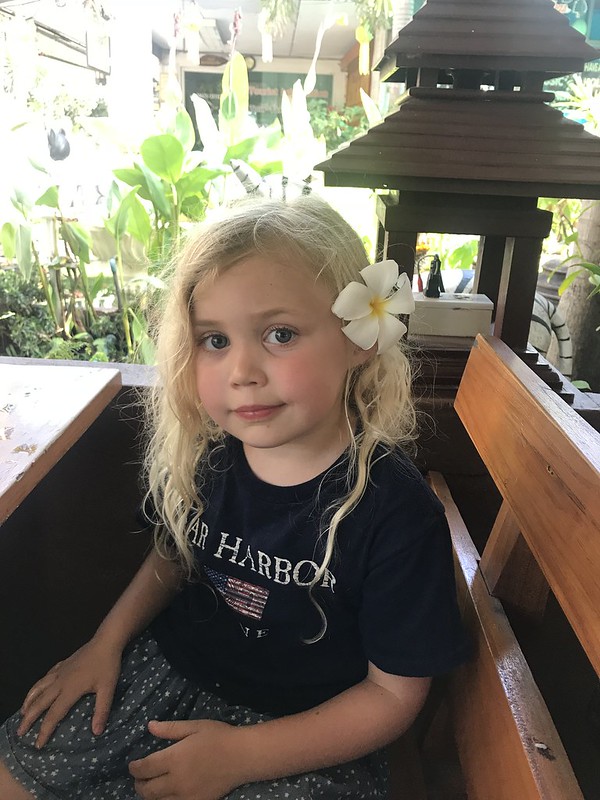 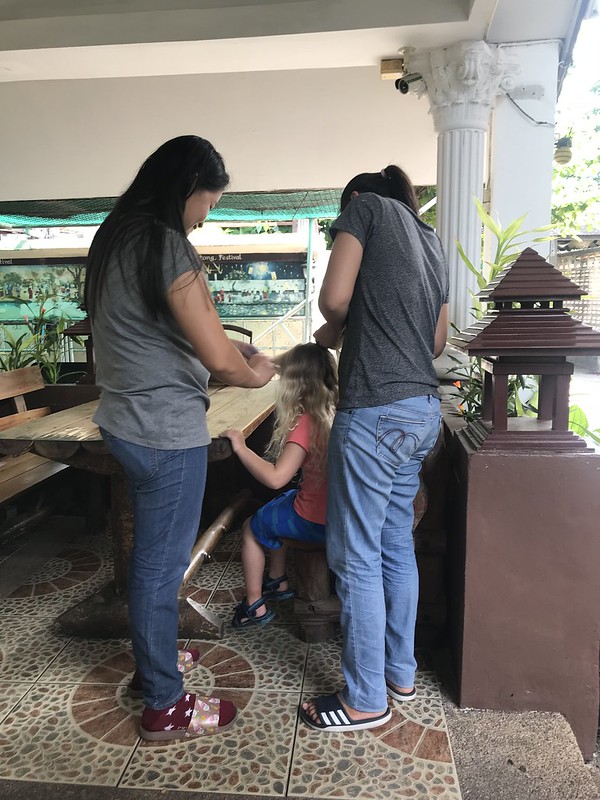 This was the next hotel.  It was a pleasant surprise/upgrade/haven.  We needed a few easy nights. 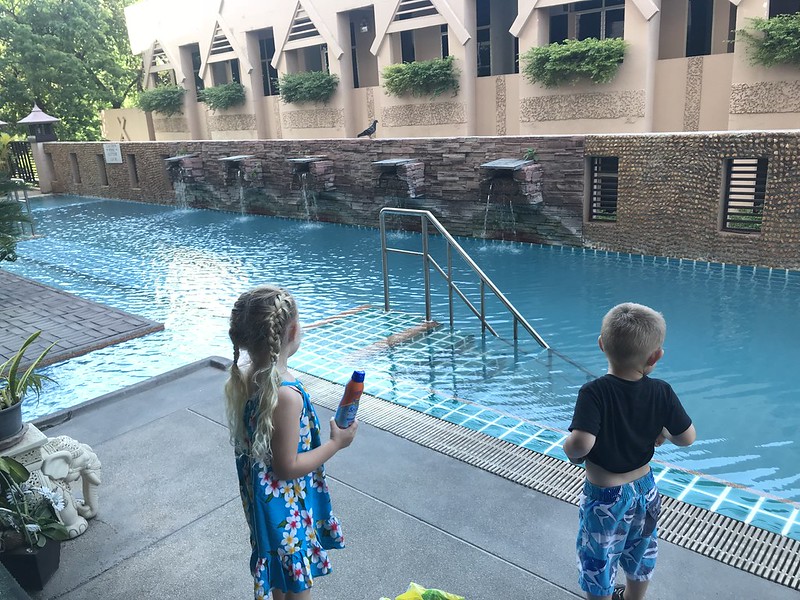 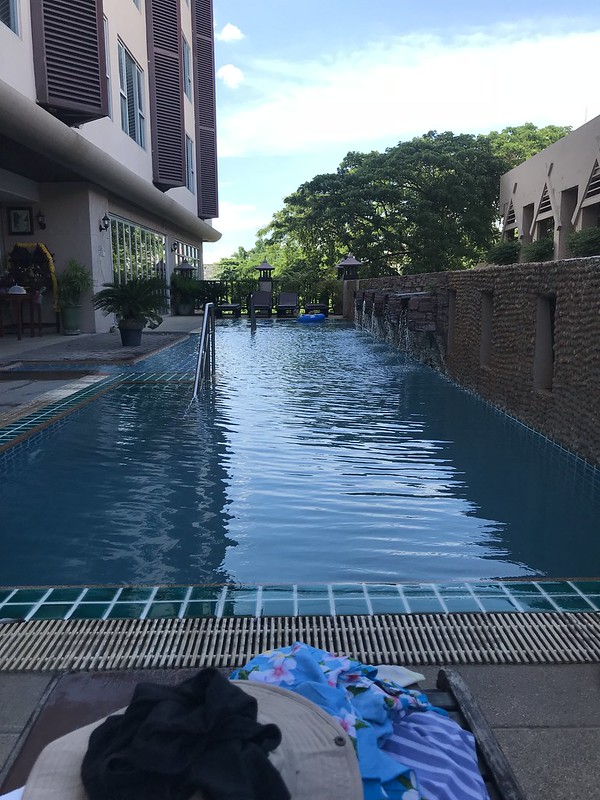 And a gym…. Scott was very happy. 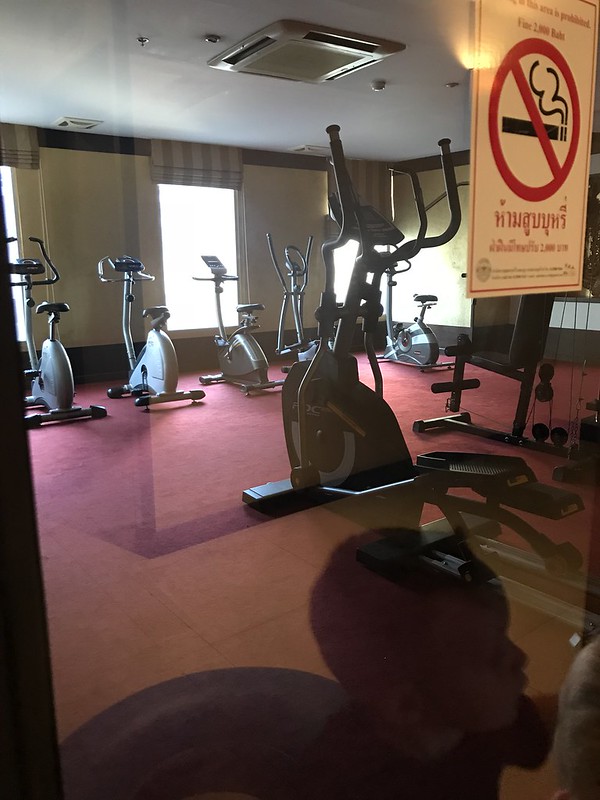 Cuddled up watching Frozen for the 11,245,764 time.  Who cares?! Happy campers = relaxed parents.  Evie had her own little semi-private room in this hotel.  She loved it. 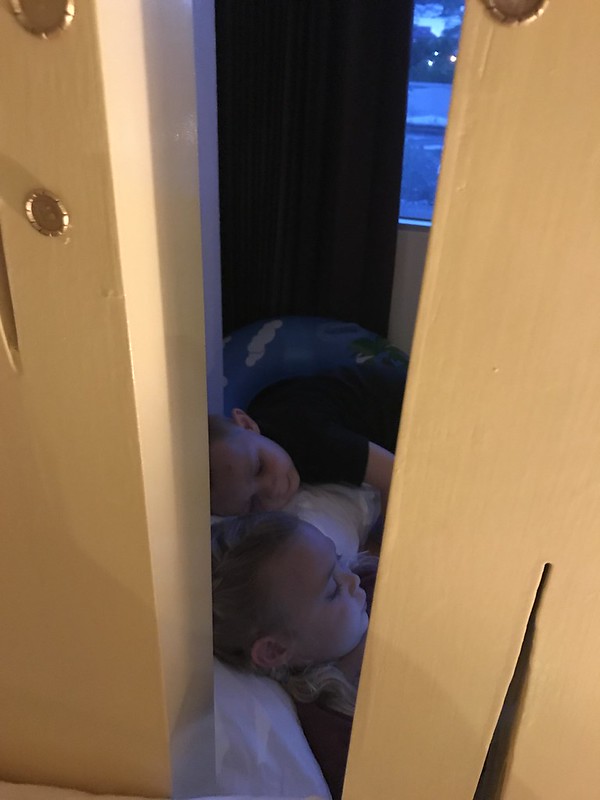 I was well on my way to winning the Great Pink Camp Cold Swim Challenge of 2018.  That's rockstar and the competitor in me is all about the win, but never in the history of the challenge has it gone...

Evie has a toothache.  I looked.  Even I can see it.  She has a major cavity between 2 molars.  Of course, she does.  She has bad teeth genes on my side.  That should come as no shock... anyone who reads...