Elephants And The Karen Tribe

When things are going sideways, I’m usually thinking ahead to how I’m going to explain it to the Grands in a way that it doesn’t sound like we’re totally reckless with their grandkids. “But it sounded like such a good idea before we got up here,” just wasn’t going to cut it.  Jack’s bare bottom was hovering about an inch off of the elephant’s head.  We were so high up we had to duck to avoid power lines, tree branches and a giant poisonous spider that had just crawled his way out of hell.  Jack was growing increasingly concerned that the picky elephant hair was scratching his sensitive parts and he was squirming.  His special elephant pants had fallen down almost to his knees but I didn’t have a third hand to help him.  My right hand was white-knuckled onto a loose rope behind my back that attached to the elephant’s body.  It did absolutely nothing to steady me but I didn’t dare to let go of it.  My left arm was locked around Jack’s middle, the only thing keeping him on the elephant.  Both arms went numb.  I held on with my thighs and made some serious promises to anyone or anything listening.

When I was having a hard time deciding on our trip to Thailand, one of the things that pushed me over the edge was the hope we could have a meaningful interaction with elephants.

I dislike zoos.  I can’t stand circuses. You couldn’t pay me to go to Sea World.  I’m THAT kind of hippie. (I don’t advertise it much because I know it puts me squarely in the misfit camp.)  My problem is that I have yet to see joyful creatures inside bars.

(I do, however, make an exception for rehabilitation facilities… that has a purpose.  I’ve also been known to bend on research aquariums and I like visiting local farms.)

If it’s important to me to have an experience with an animal, I’ll go to them not the other way around.

{By the way, I’m not judgey about how anyone else wants to conduct their relationship with the animal kingdom.  I also recognize that my way isn’t an ideal solution.  It may be the animals I go see just want to be left alone to live.  There is no perfect solution. But we’ve got to learn about them somehow so we care about them enough to respect them and figure out how to share the planet with them.}

There are about 1600 of wild elephants in Thailand, but you can’t get near them and you wouldn’t want to anyway.  We are not invited into their world.  Fair enough.  Most of the Thai elephants are living with humans in some way.  After centuries of partnership/domestication, it’s now illegal to use them for work.  Many of the formerly working elephants now live in retirement camps/sanctuaries/tourist venues.  Their owners make a profit by bringing in tourists to see them, touch them and take pictures with them.

We booked that kind of tour.

Then I read TripAdvisor.

The #1 rated outdoor activity in Chiang Mai (and there are thousands… it’s a massive adventure hub) was a day spent with the Karen Tribe deep in the jungle, helping them to look after their elephants.  It had my attention at deep jungle.

Unfortunately, the experience is booked months in advance.  People plan their honeymoon around this thing.  I emailed anyway and threw a little energy ball to my cabal, “Any chance you all could pull some strings on your end?!”

Turns out, they could.

The tribe had a rare opening and could accommodate us THE NEXT DAY!  There is no such thing as a coincidence.

The morning of, we were picked up in a 4×4 by a guide who drove us 2 hours outside the city.  The road went from highway to main road, to side road, to dirt road, to road still in the process of being made.

The village wasn’t able to afford to keep their elephants when it became illegal to use them for work.  They loaned their herd to the retirement compounds in Chiang Mai.  When they went to visit them the elephants weren’t happy.  So the village had a big meeting and 22 families agreed to contribute a certain amount and kind of food (which is a major deal – this is all handmade food – there is no electricity) and they brought the elephants home.  Now they have small tours to facilitate learning and personal interaction with the elephants and to earn money to support them. They treated us like a valued member of the partnership. (I have a decent bullshit detector and this felt genuine and heartfelt. It did to Scott too.)

With a total of 11 people in our group, (including the 4 of us), our ability to interact with the elephants (even the baby) was unrestricted.  Each unit, 2 honeymooners from the US, a dad with 2 older kids from Germany and Scott and I were each assigned one of the elephants to look after all day.  Scott and Evie got the alpha male named Puchan.  Jack and I got the Grandmom, Mae Marie.

We learned how to tell if an elephant is sick or healthy.  We handled their dung (with bare hands – and it was surprisingly not gross).  We fed them.  We bathed them (with rainforest soap… made from tree bark).  We exercised them.  We rode them bareback, which is somewhat of a controversial issue here (and we talked through why that is and how the tribe feels).  We made food medicine for them (something like a vitamin ball) out of gifts from the forest.  We hugged them and played with them and even tickled the baby in his leg pit (for real… it squirmed, kicked it’s legs and did the closest thing to laughing an elephant can do).

It was an intimate experience – skin-to-sensitive-skin for Jack.

I don’t claim to know with certainty exactly what the elephants were thinking… but I’m positive in my soul these animals were happy, home.

It was a special day.  I don’t know if the kids will remember it.  Whether or not they do, I don’t really care.  I saw their neurons firing, connections being made, thoughts forming.  I think we gave them something special but unknowable that day.

On the way out to the tribe.  All done by hand.  The monsoon season fills up the beds to grow the rice. 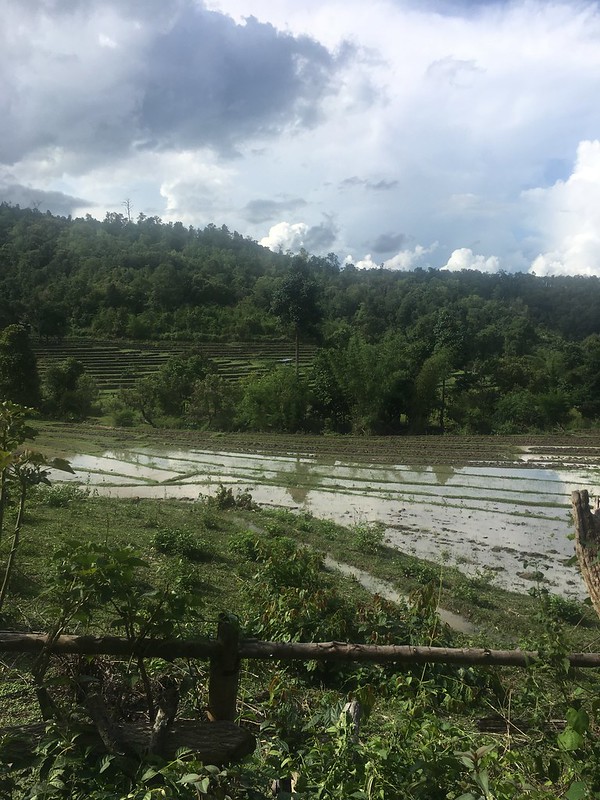 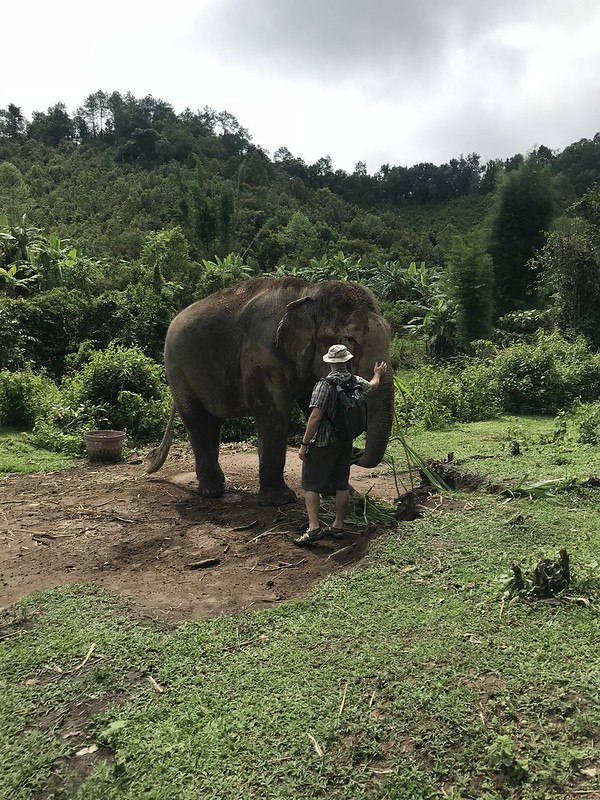 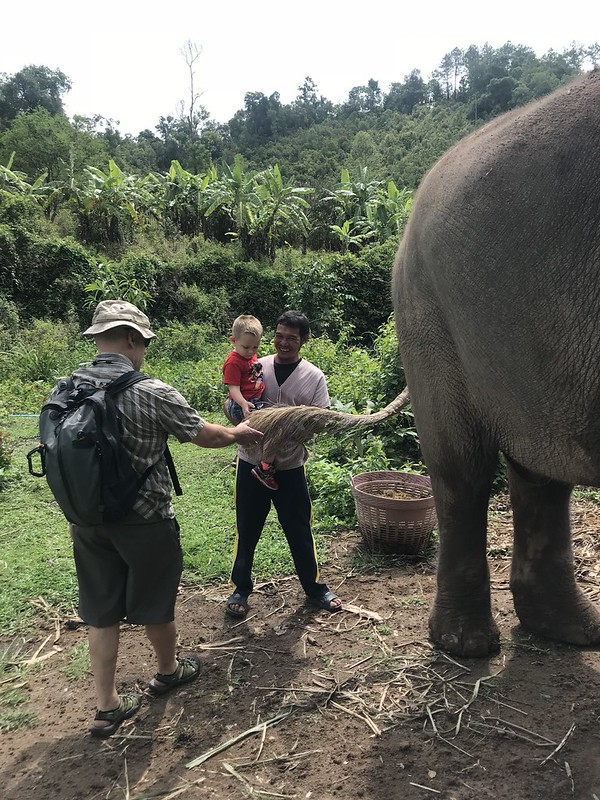 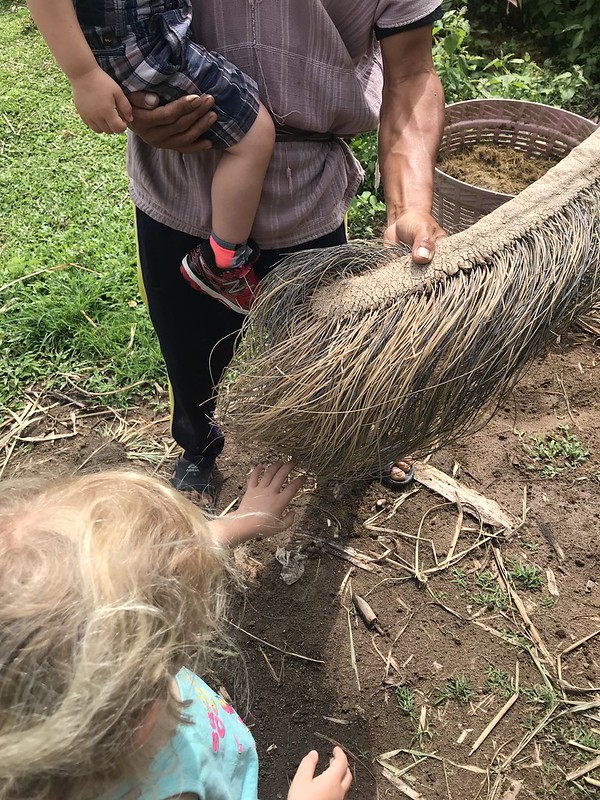 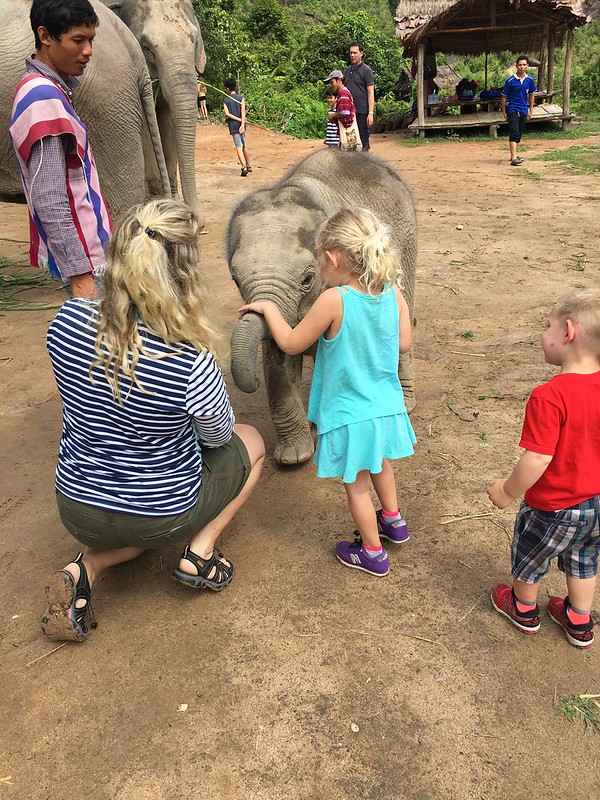 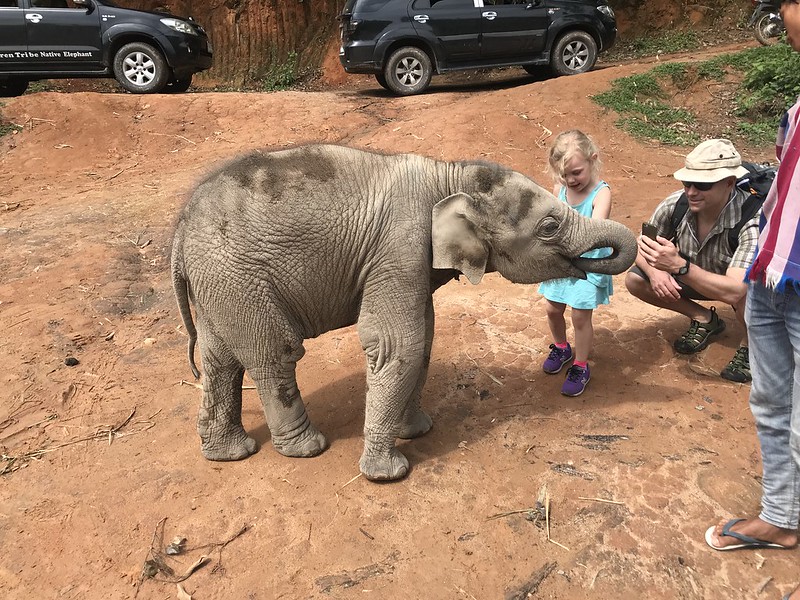 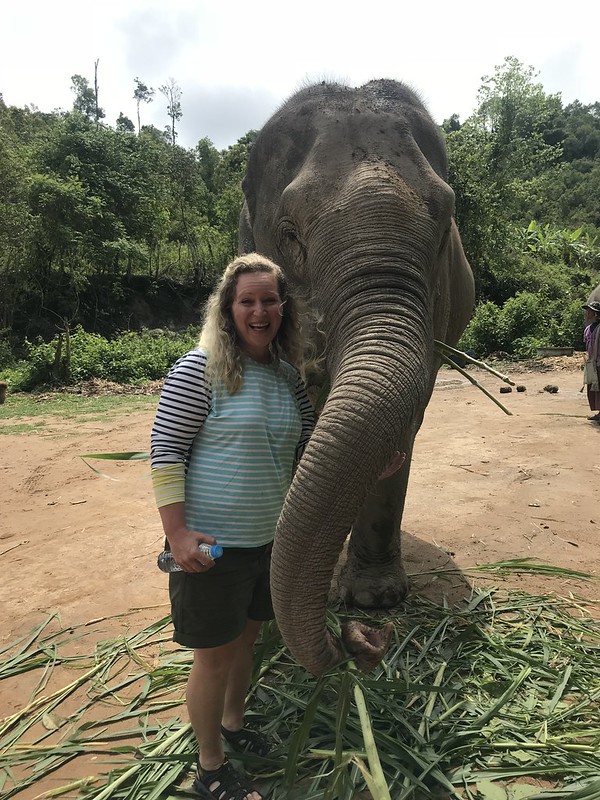 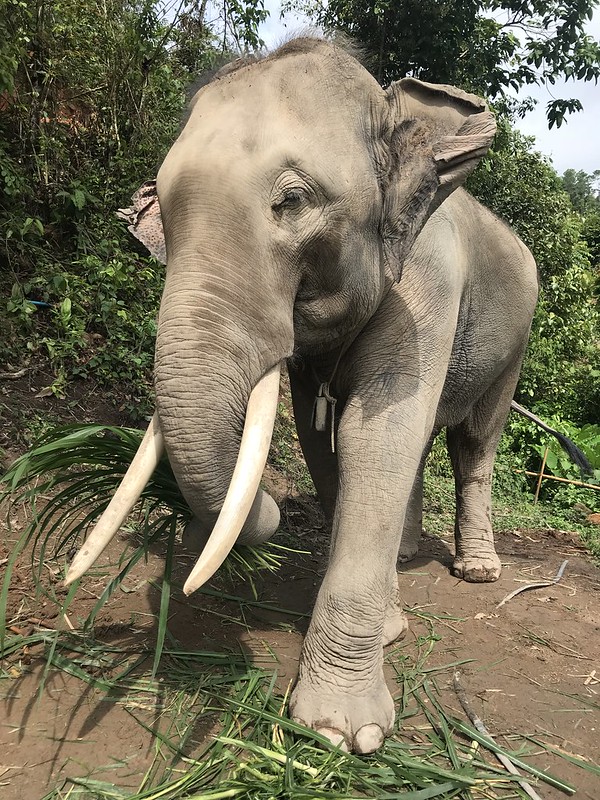 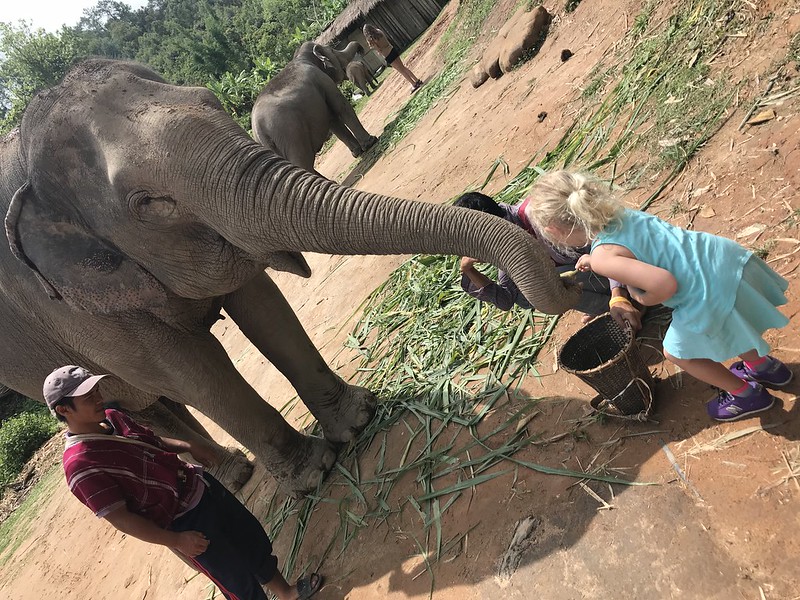 We were asked to wear local tribe shirts to help the elephants identify us as part of the tribe.  Jack got to keep his. 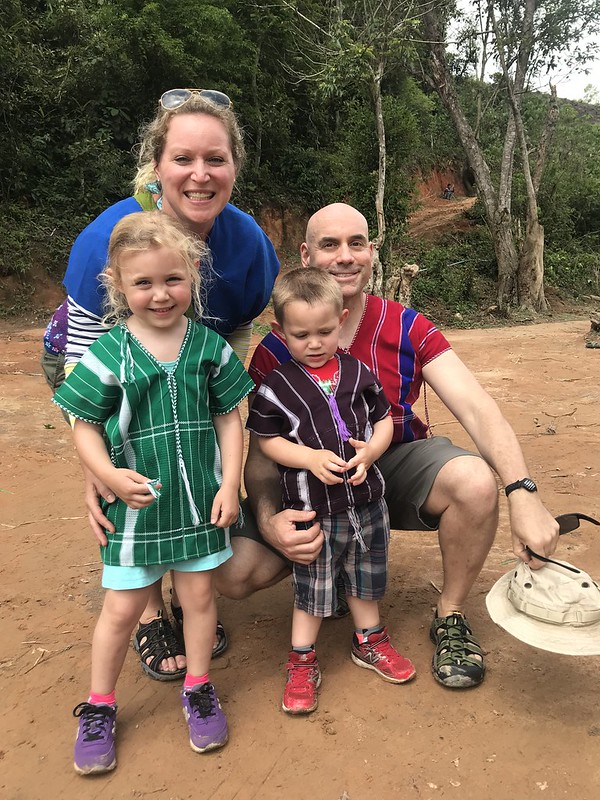 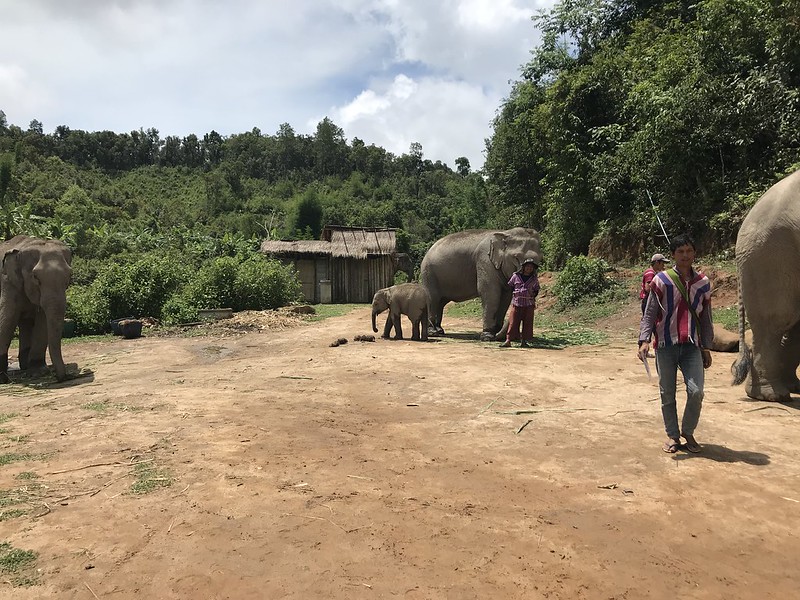 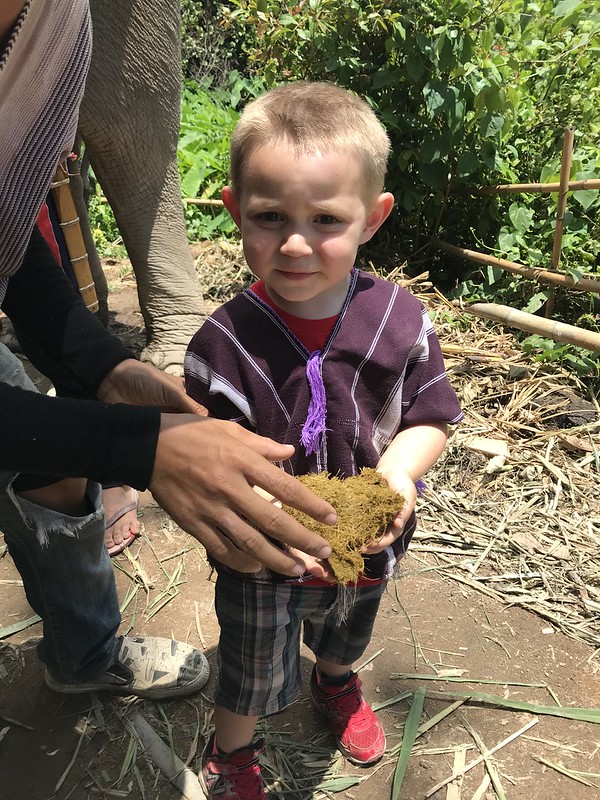 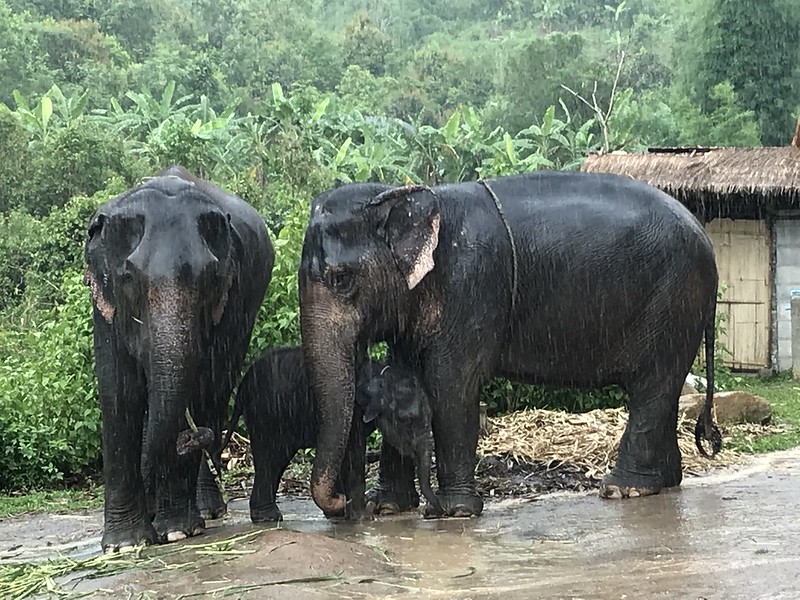 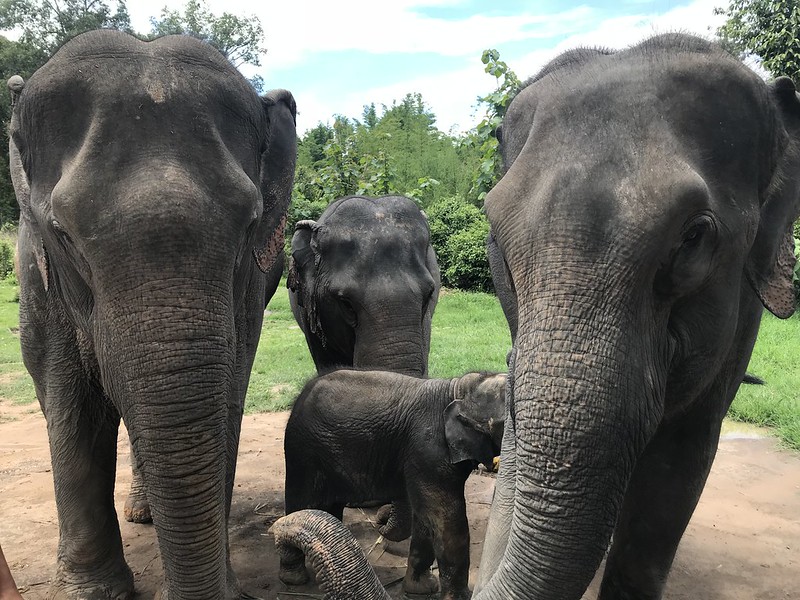 You can see Jack and I hanging on for deal life on top of Mae Marie in the left side of this picture.  (I never got my camera out because I was too busy keeping us alive.) 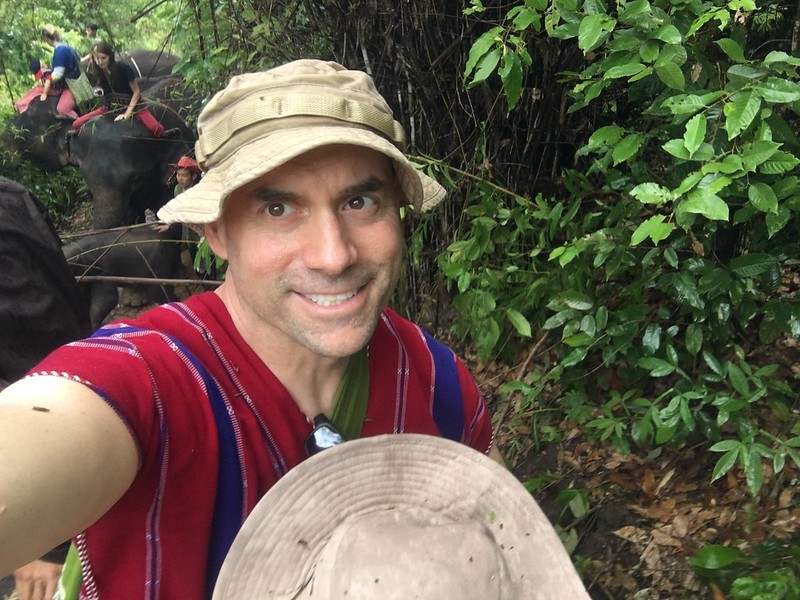 Hands down, the best meal we had in Thailand (and that’s really really saying something…).  It was sweet, delicious, green and the elephants cleaned up the fruit leftovers. 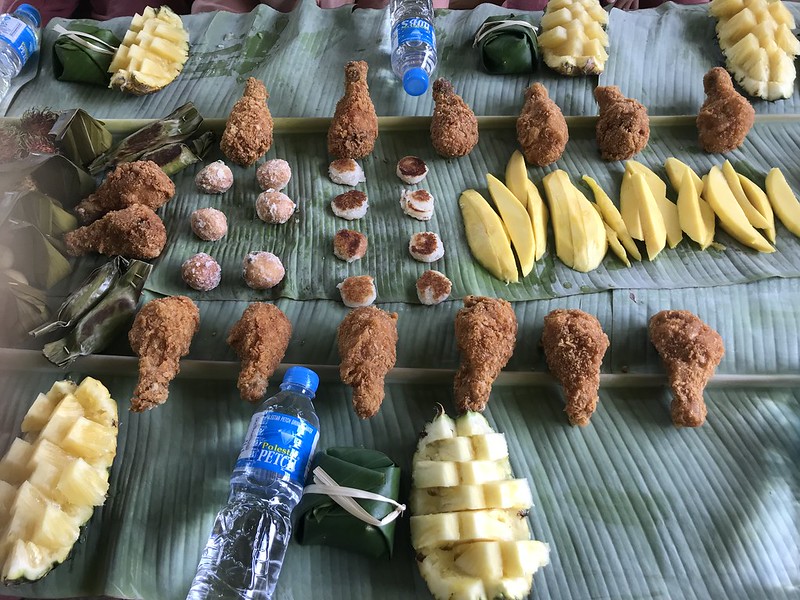 Jack got a short ride on the baby with the help of one of the guides. Note the red elephant pants.  This were a few sizes too big. 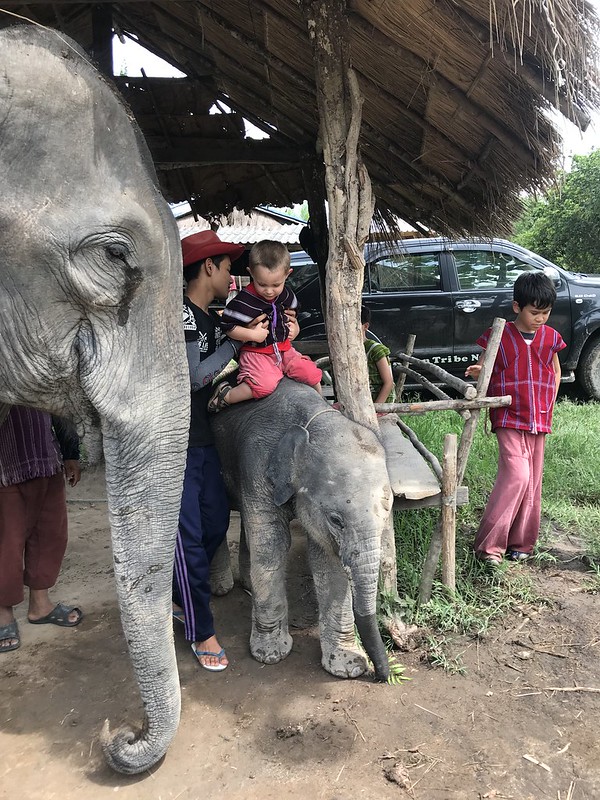 Scott looking sharp in his too-tight shirt and some hot elephant pants: 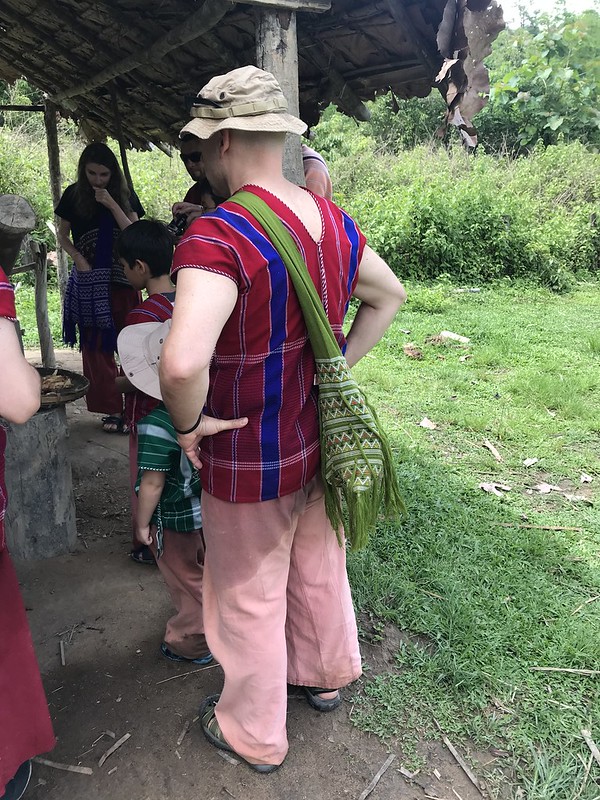 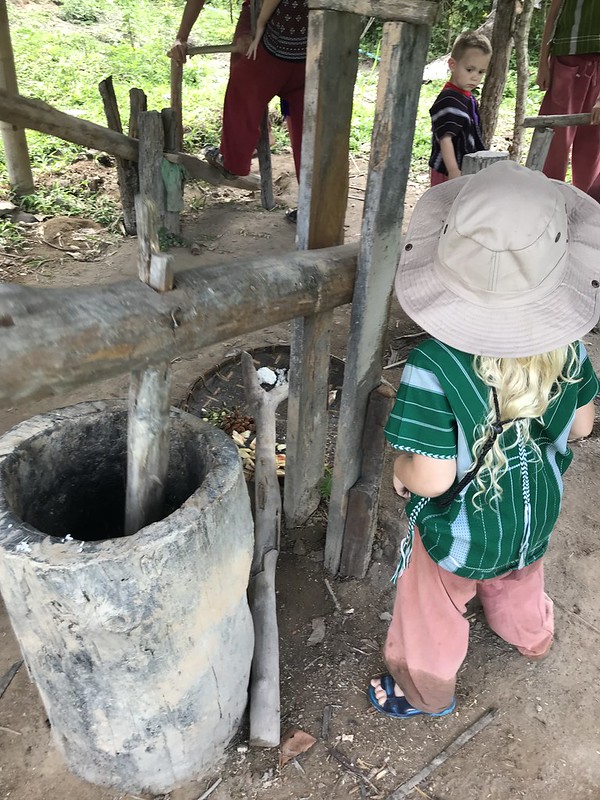 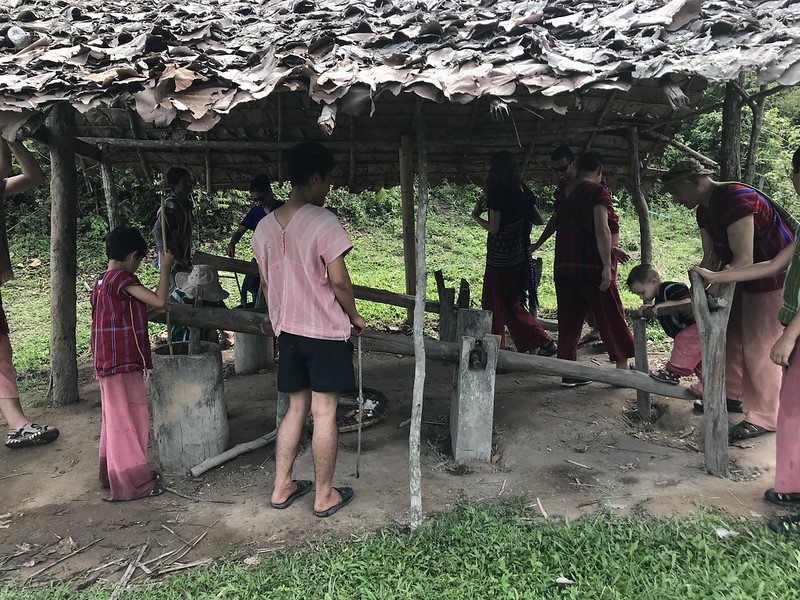 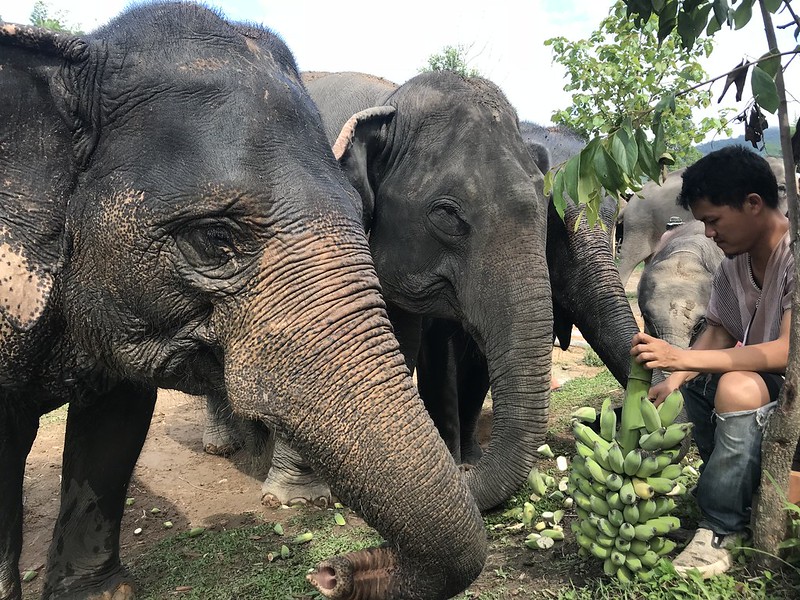 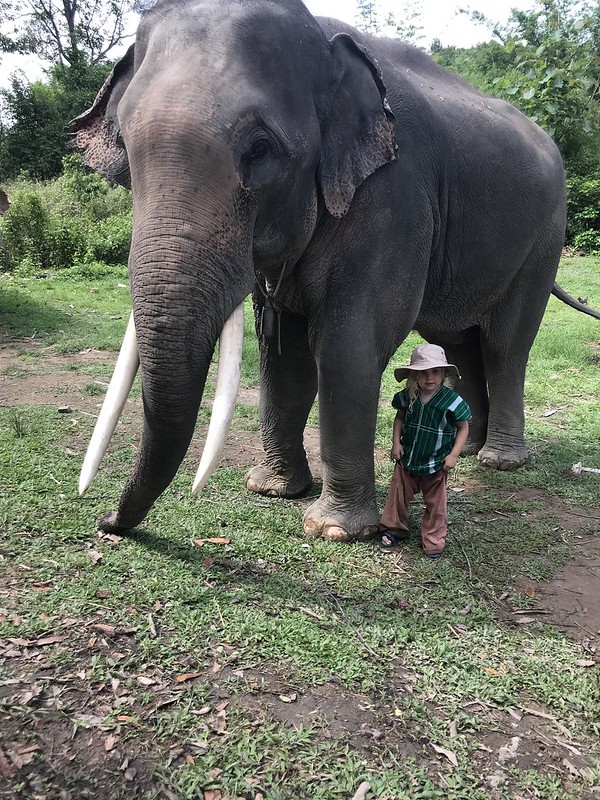 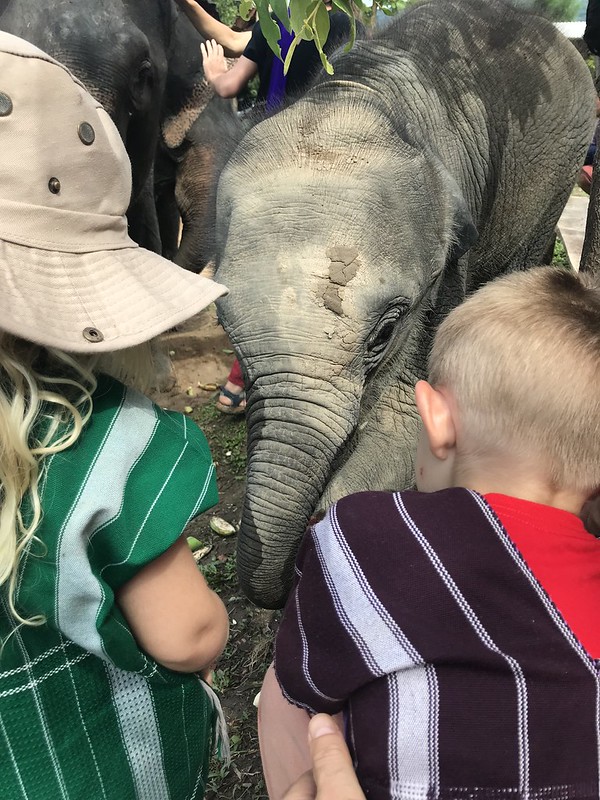 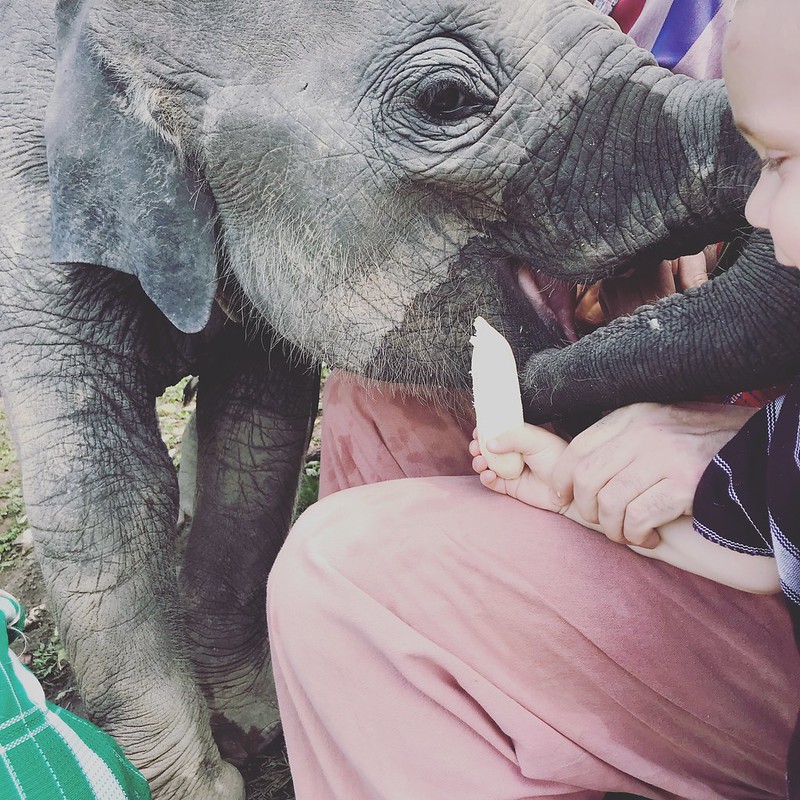 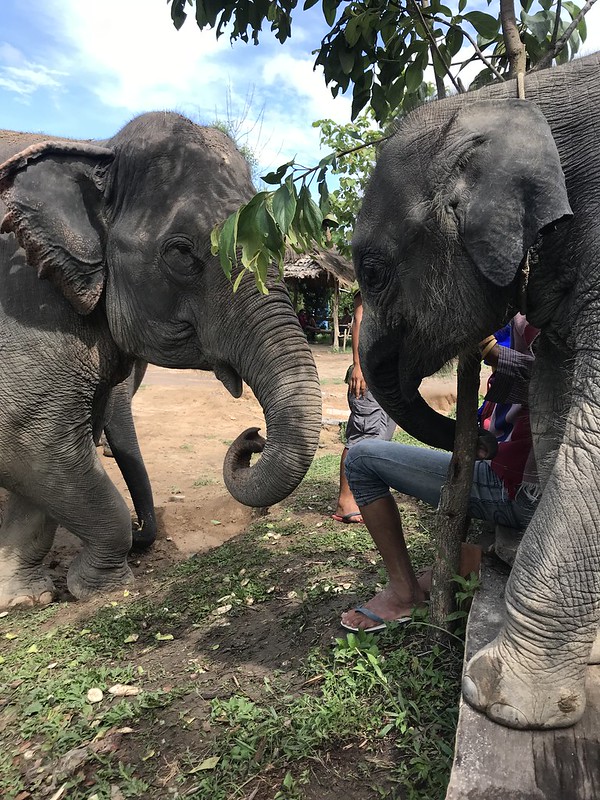 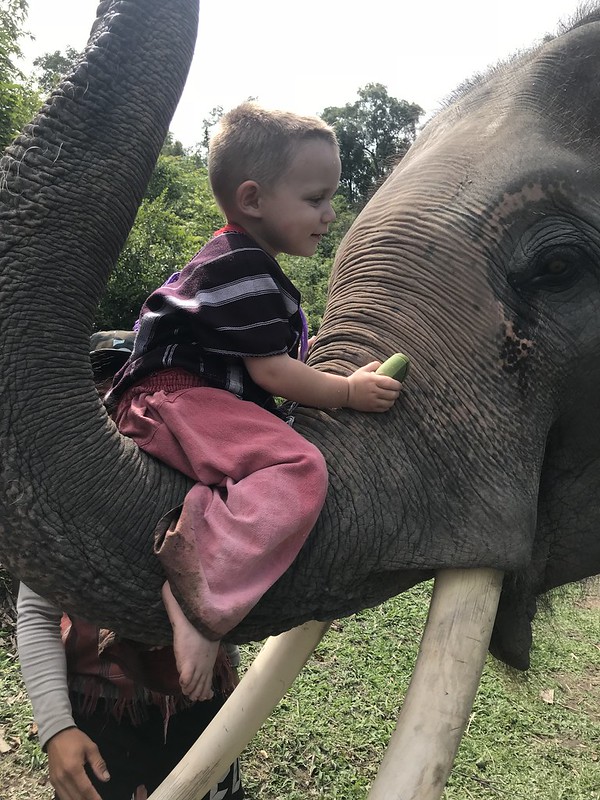 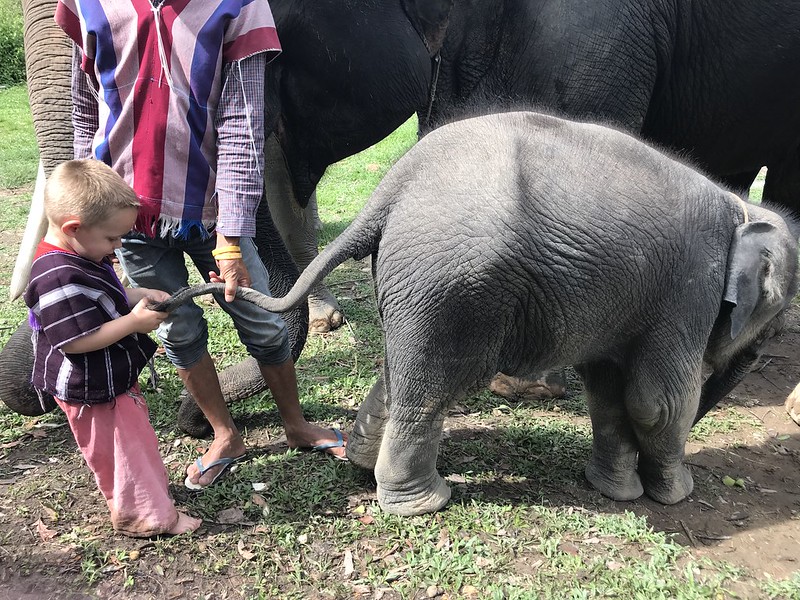 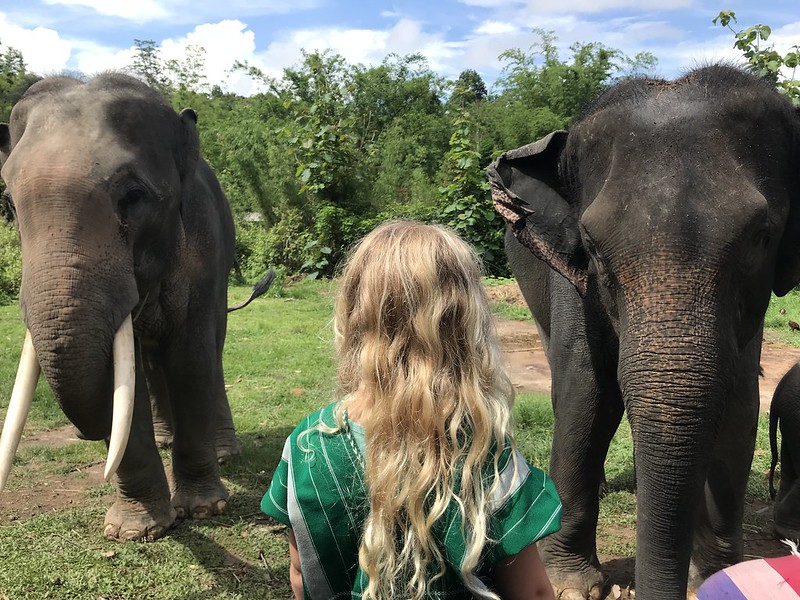 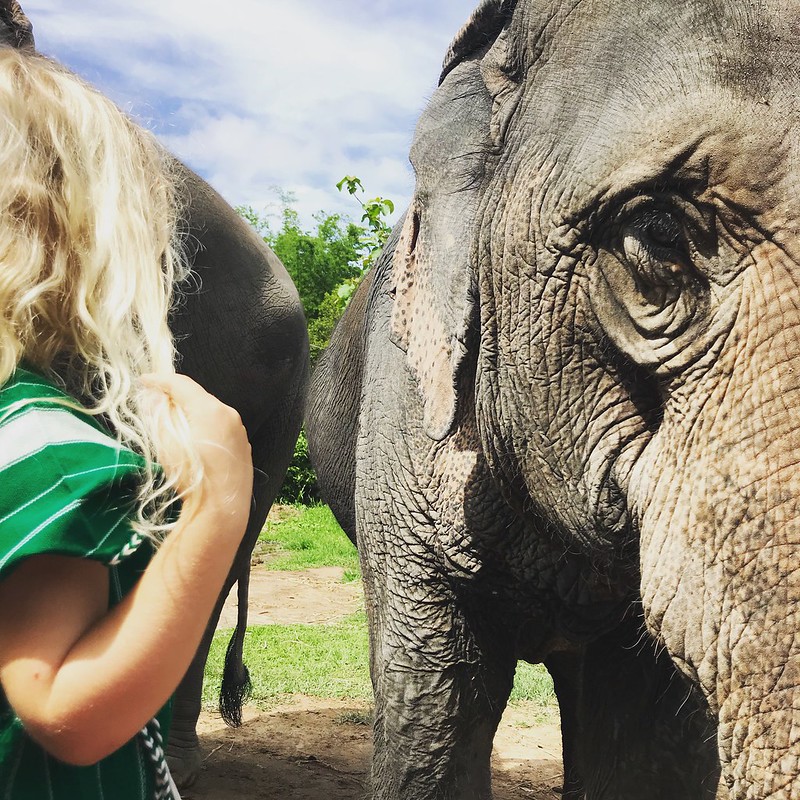 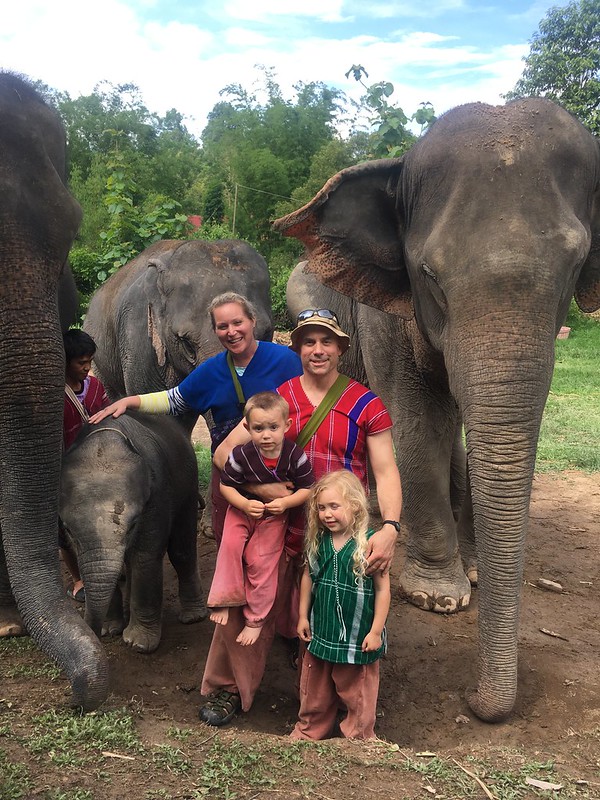 Leaving Vermont we started looking for places of interest in NY.  I was thinking the Catskills when Scott mentioned he had a buddy "somewhere in NY" (super helpful).  He got in touch with Josh, Lauren  & fam and they offered...