Daily LifeinterestingoddPicturesPlacesThe Story of Us

Sitting in the restaurant on the beach at sunset drinking my second beer, we’d been there a grand total of 2 hours, the vibe was settling into my bones nicely.  The tide was out so the coral was exposed and the kids (and only our kids – no other kids) were happily playing in tide pools about 100-150 ft away.  Scott and I were deep in conversation spitballing the next few years of our life.

Evie ran up to the table, “Mommy, Daddy there’s something alive out there.”  Yeah!  Right on…  that’s the charm of tide pools.  Double thumbs up.  She continued, “It’s black and kinda gushy.”  Pause.  It didn’t look gushy.  It was gushy.  A faint warning bell registered.

I’ll take it.  Not ideal but, realistically, not a show stopper.  They used a stick.  Well done.  Even so, they got a mild lecture on not touching (or poking) things that are (or were) alive from the sea.  Even dead things can sting you… jellyfish… yadda yadda yadda… a rattlesnake just bit a man even though its head was severed from the body…. blah blah blah…. respect the wild, it can be fickle.

Me to Scott, “Why don’t you just take a quick look to make sure it’s not a jellyfish?” and off they trotted.

I watched them casually pick their way out to the spot.  Then I watched the sun sink some more and I ordered another beer.

Scott’s head suddenly snapped up.  His body language went from relaxed to surprised to REALLY surprised.  He quickly bent down at the knee.  Then he stood up quickly and whipped out his phone.  My phone rang.

Scott, “Ummm… this isn’t a jellyfish.”  Maybe we should have googled sea creatures of Thailand?!  “This is a giant black eel and it’s still alive.  It’s… I don’t know… hiding in the sand.  I don’t know how it’s breathing. ”  As he was talking, he scooped up Jack and grabbed Evie’s hand. “And there are a lot more of them out here.”

They gingerly began a long process of picking where they were going to step on their way back to me.  (If he could have sprouted wings and flown he would have.)

Good job, us… always OJT’ing (On the Job Training).  Scott and I became a little more circumspect about where we let the kids roam.  It did make for solid biology/oceanography lesson though.  Nothing like a little adrenaline to drive home a point.

I found tickets for $47/pp 1-way, Chiang Mai to Krabi (the other airport – the smaller sister to Phuket).  We settled on Koh Lanta as a place to hang out hat for a couple of weeks.  Scott’s working.  Evie is drawing pictures of the trees she saw in Thailand. 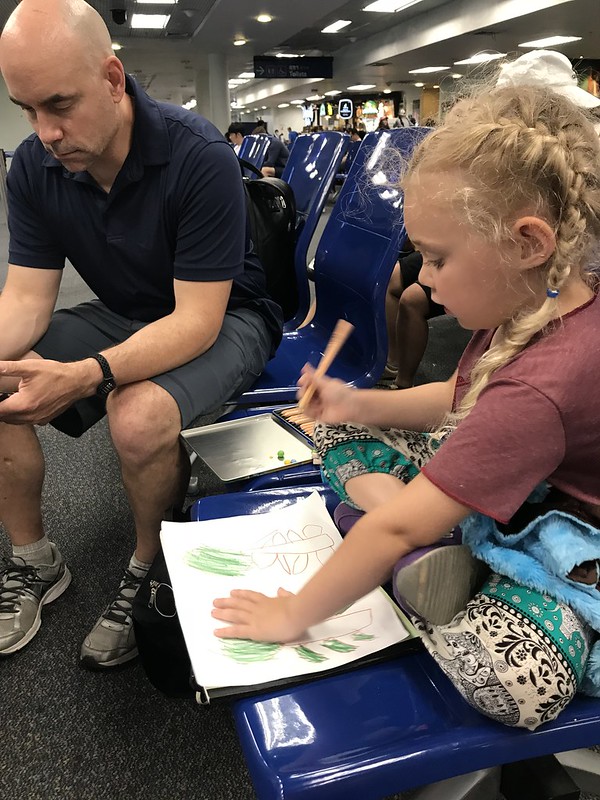 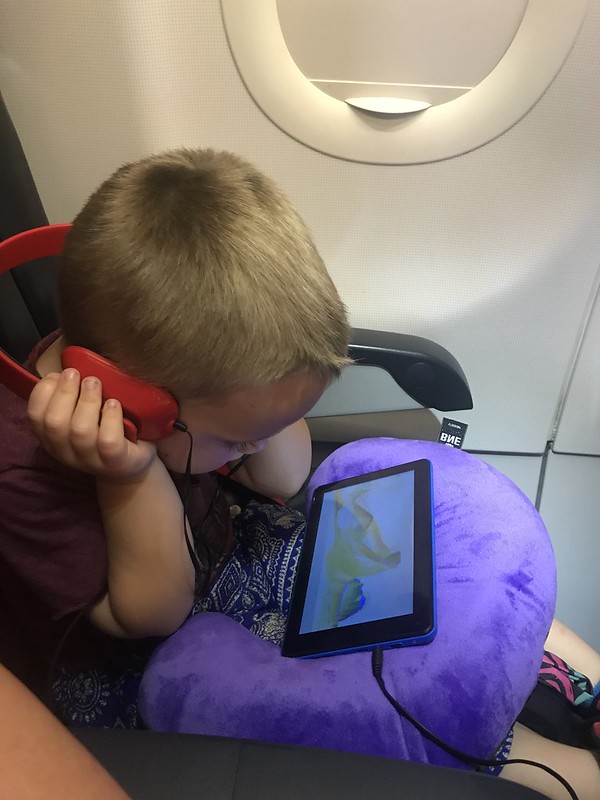 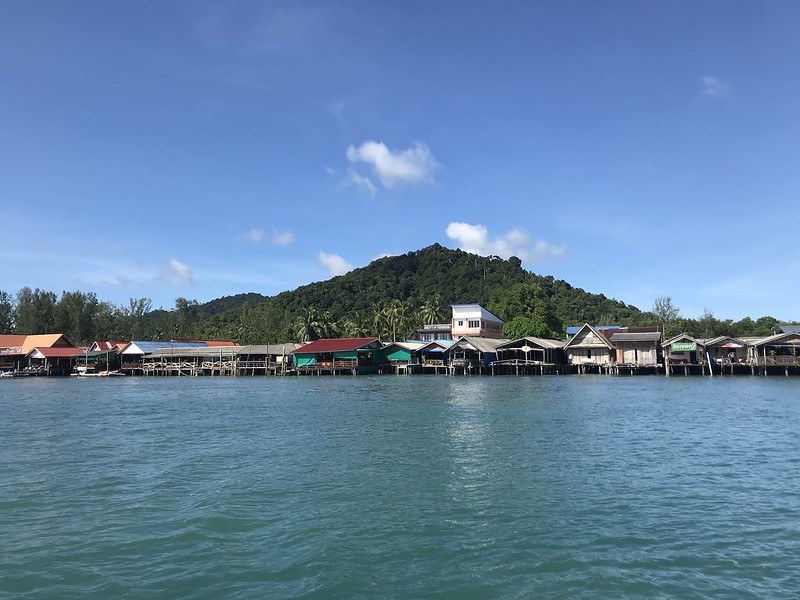 Evie and Jack made friends with a little local girl at the hotel. 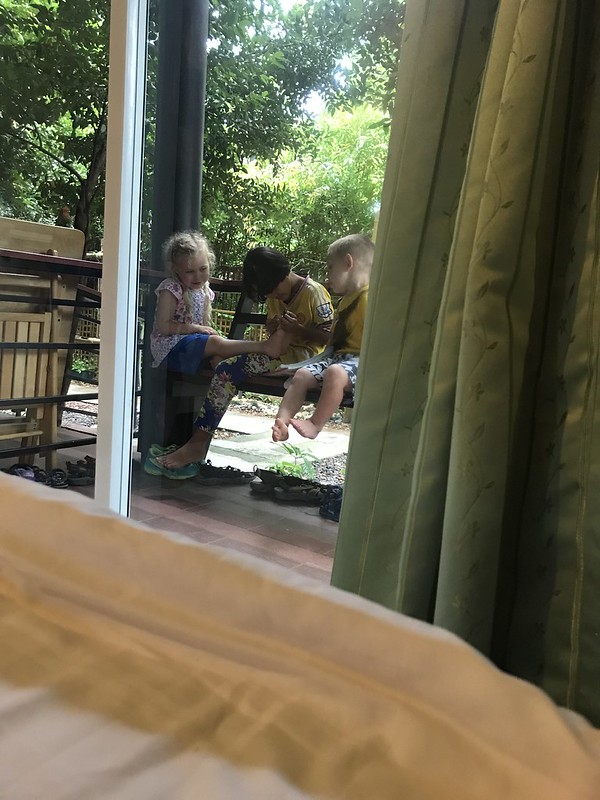 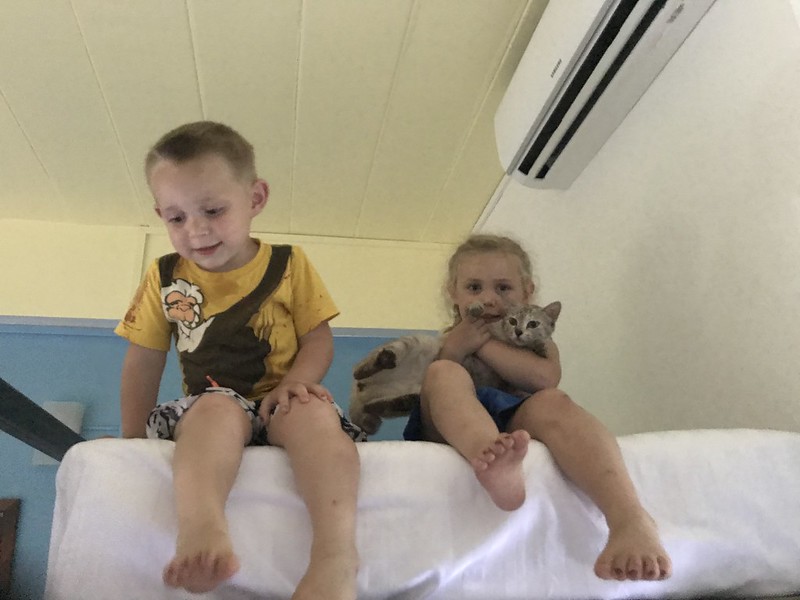 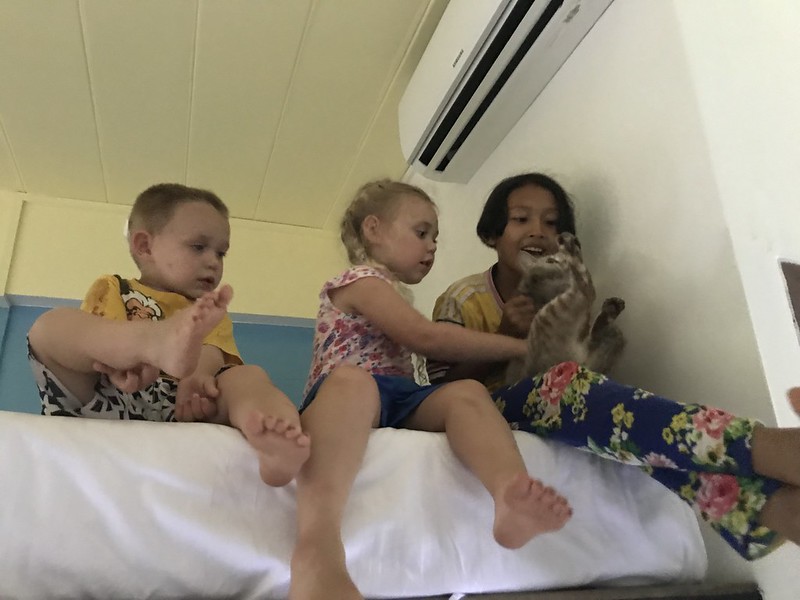 Down to the beach: 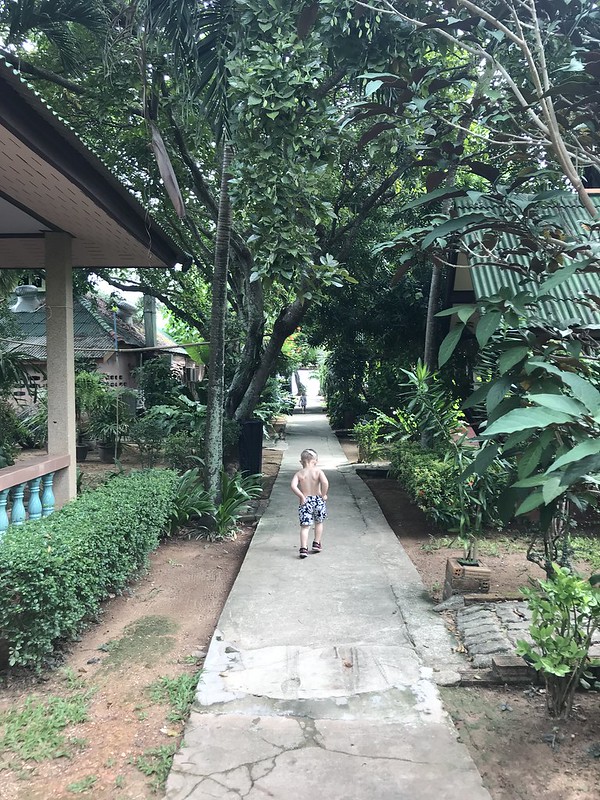 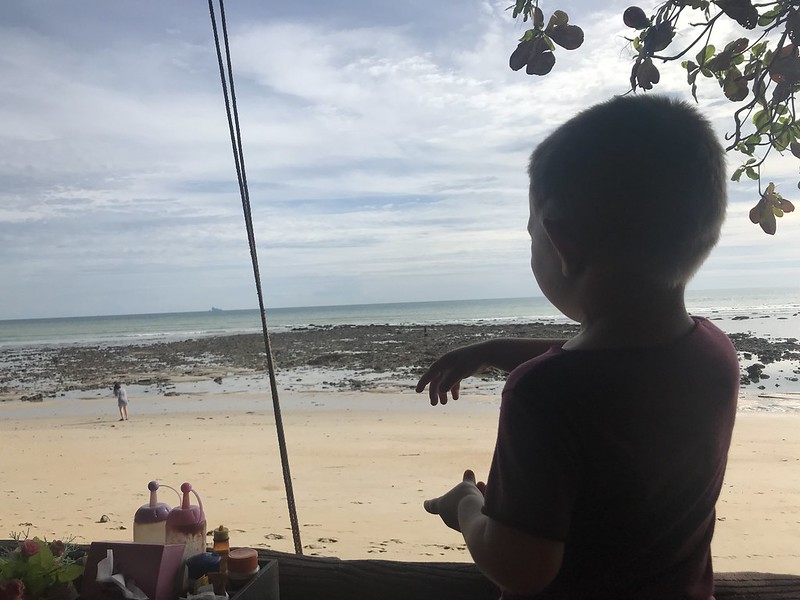 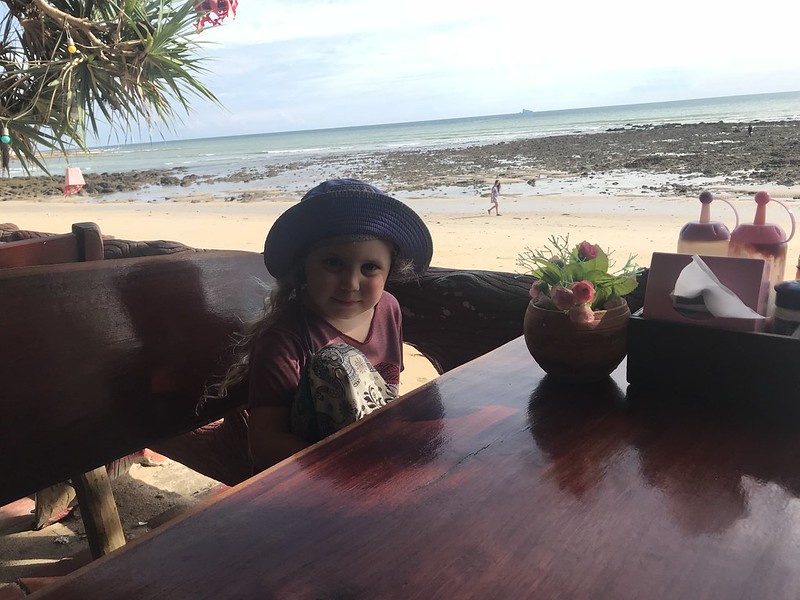 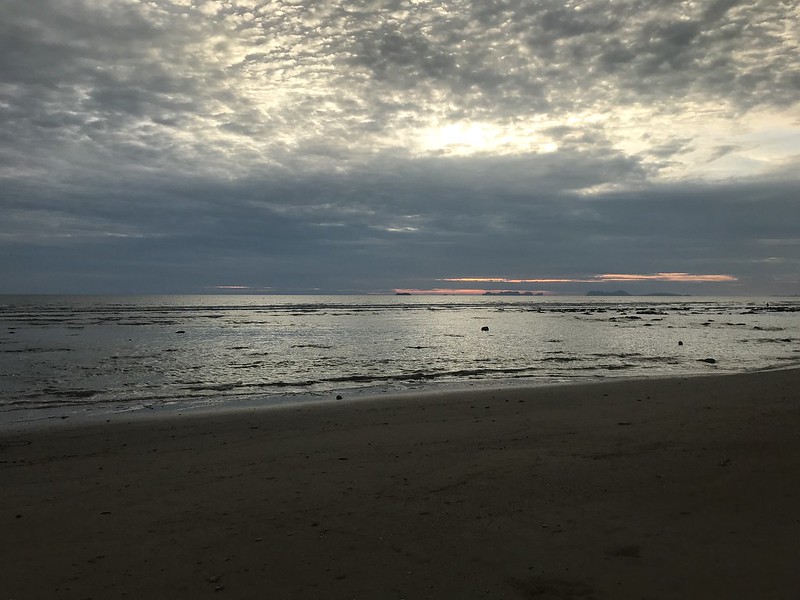 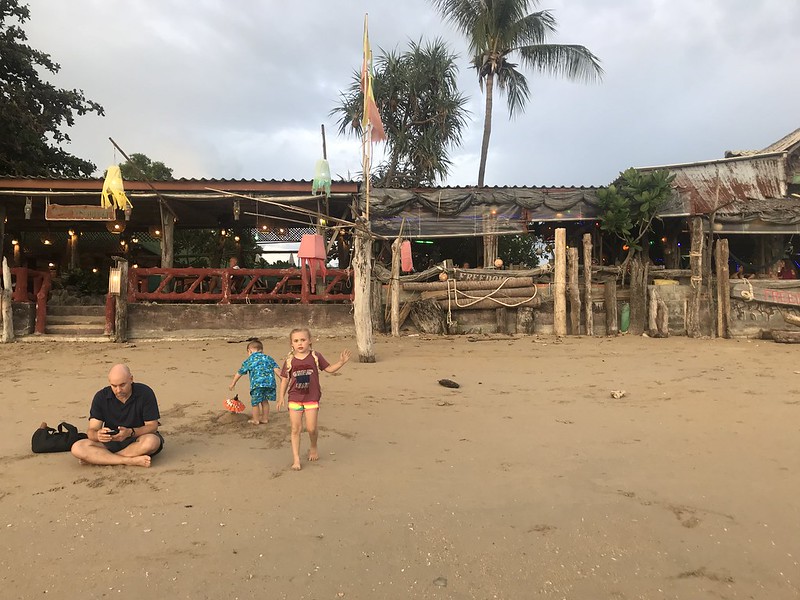 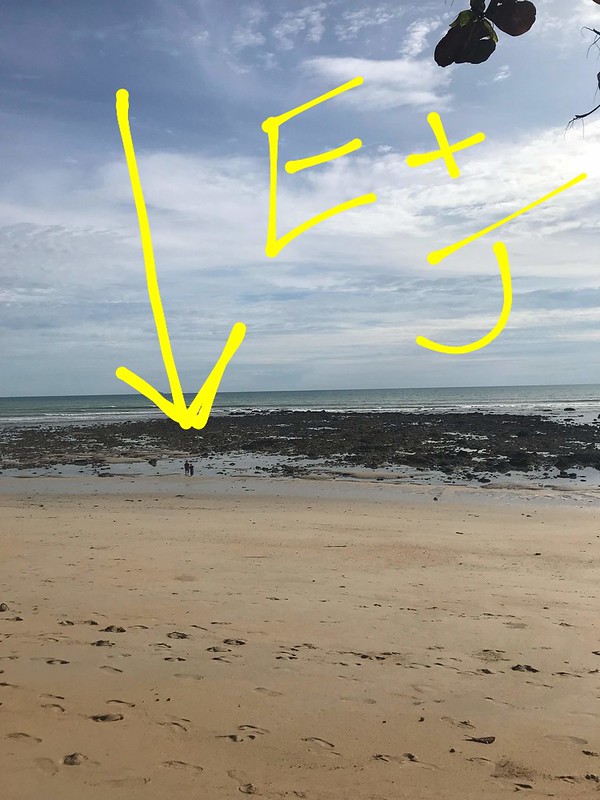 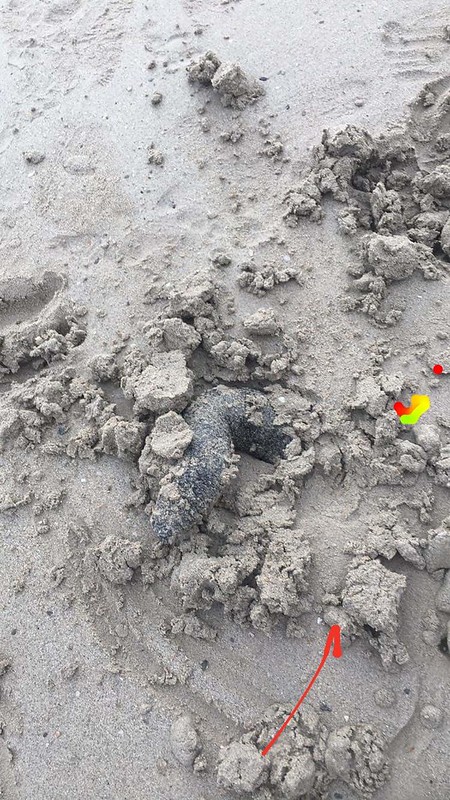 Previous Post
When There Is No Emergency Room, But You Know You Need One!
Next Post
Chiang Mai Night Market

Elephants And The Karen Tribe

When things are going sideways, I'm usually thinking ahead to how I'm going to explain it to the Grands in a way that it doesn't sound like we're totally reckless with their grandkids. "But it sounded like such a good idea...

Sitting in the car, heading into town the other day, out of the blue Mom says to me, "You can use me as your foil... if you want to."  Having not personally visited the 1920s, it took me a minute...