We’d just driven out of spot (we’ll miss you spot #22 at Emerald Forest in Trinidad, CA) and we were lined up to put the Grey Man on the dolly and head south. I was getting the kids ready for the car ride when Scott came rushing into the RV, “I totally just f******* up,” and with that, rushed out again.  Huh.  I followed him. 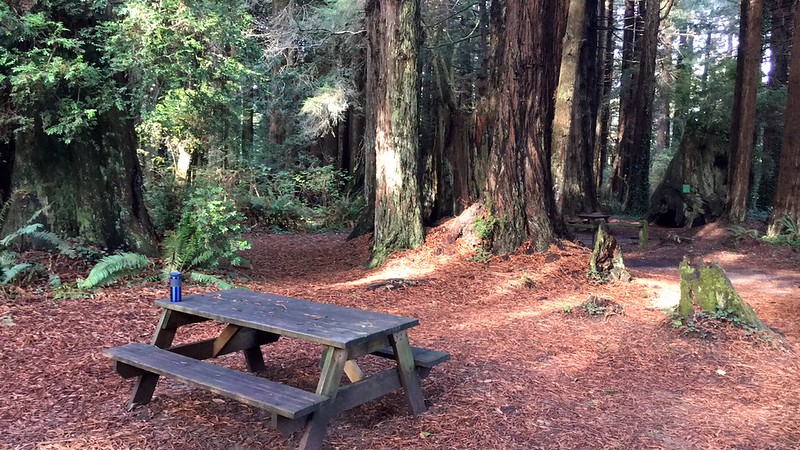 Apparently Scott had gunned it a little too enthusiastically and the Grey Man went right up and over the dolly.  The car was sitting on the frame so there was no damage.  The front tires were suspended in air about 2 ft off the ground.  Scott started what I call his “Moab-rush”.  He had an immediate need to fix everything.  When he’s like this, he’s in a coherent in this state but not entirely logical and he’s hard to understand.  He was frantically searching for a jack and by god he was going to lift the car over 2 feet in the next 3 minutes.  I asked him to slow down and explain the idea to me.  He caught the edge to my voice.  I’m all in if the plan is logical and possible (even remotely) and calmly explained.  But I’m the first to mutiny when the leadership goes belly up.  Scott know this.  He took a deep breath.

While we were jacking the car up, a lady from the campground came by.  She asked us if we needed anything… anything at all.  She offered a floor jack.  Scott said, “Yeah.  Absolutely.  If you have a floor jack, it would be a huge help.”   She even noted that this had happened to someone else in the park recently and they had to call a tow truck.  She came back a few minutes later and said the owner would love to help us… but, you know, lawyers.  So no, we couldn’t use the floor jack and we needed to call a tow truck.  It wasn’t what she said, it was the way she said it.  I get it… you don’t want to help (although this is legitimately the FIRST time we’ve been in a spot and someone didn’t bend over backwards to be helpful).  No issue.  But don’t tell me what we HAVE to do.  Screw your tow truck lady…. not all people are built the same.  Scott and I aren’t idiots who can’t solve a problem on our own.  There are times for tow trucks (sand pits in the desert, gas spraying out from underneath the rig) and then there are times to use a little common sense and elbow grease.

About an hour later we had the car back on the dolly and we were pulling out.  We were later than expected, but that’s ok.  We have no where to be.  We ended up pulling into my favorite little hippy-town on 101.  Tonight I am waiting to see if we’ll be woken up by a merry band of naked folks who are chanting to the coming Super Moon and wanting us to join them (I might… just for the hell of it!). 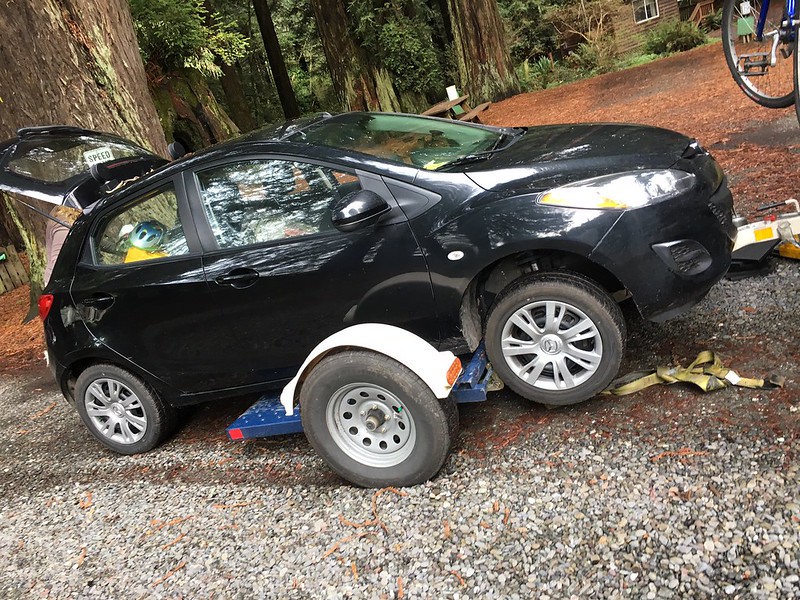 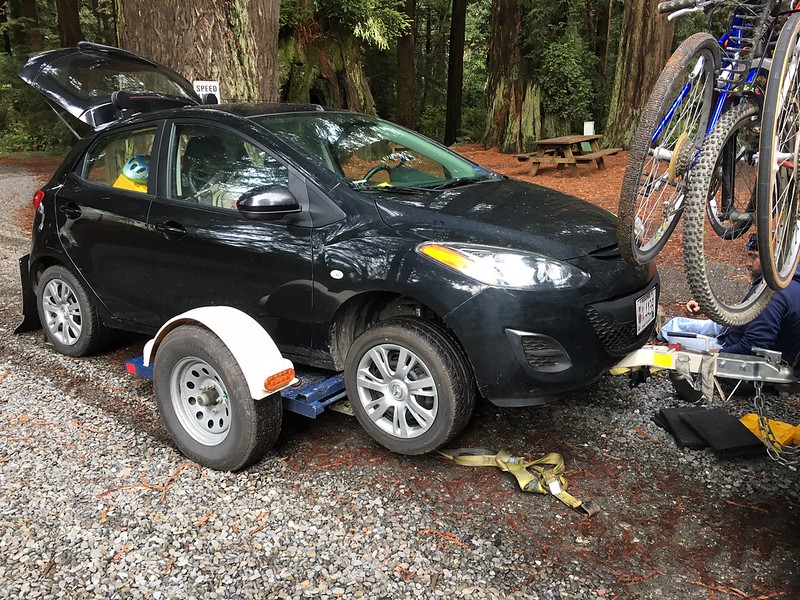 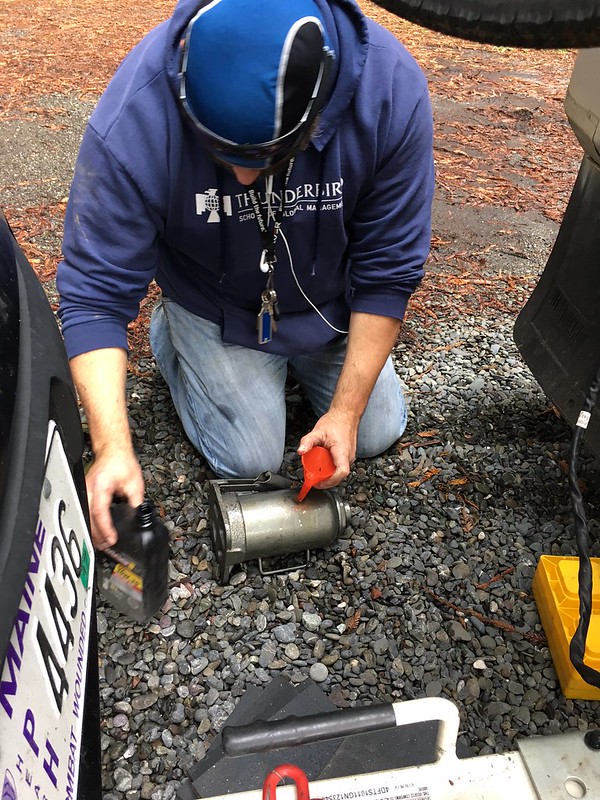 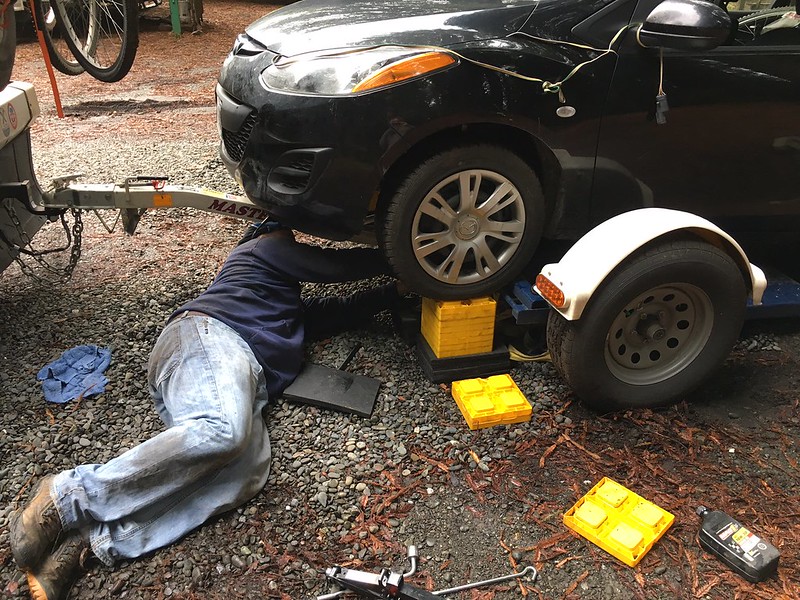 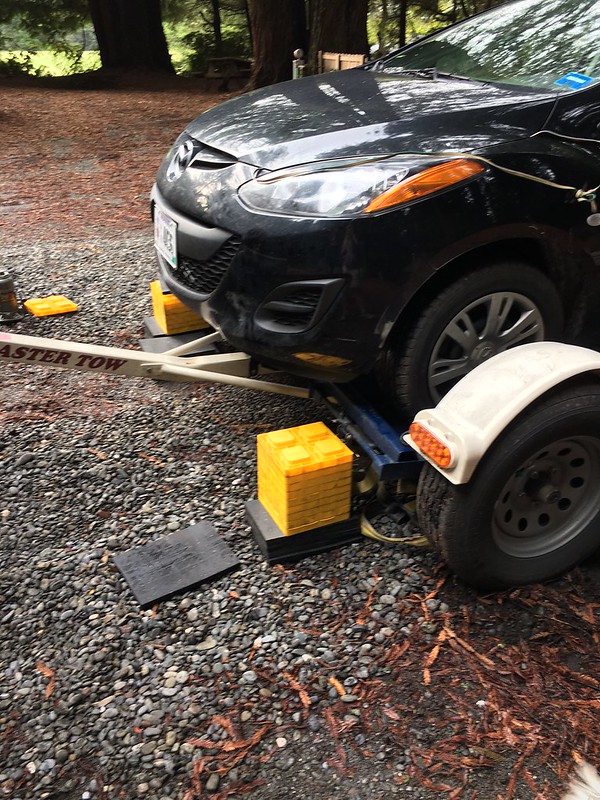 There have been other quirky things about California that make me laugh.  This is the only place in 7 countries that folks mistake Evie for a boy.  Here’s the deal, I dress her in hand-me-down.  Max, Cooper and William have all donated to Evie’s closet.  The clothes are in great condition.  I see no reason not to put her in them.  She doesn’t even notice unless she’s in a princess mood. The other day we were at a park and I was looking for her.  A lady said, “Are you looking for your son?  He’s over here.  Curly blonde hair?”  I said no at first and then it dawned on me, I had better double check. Sure enough, Ev was halfway up a tree.  The more I think about it, the more I like that a few people here have thought she was a boy.  I think it should be a little hard to tell with kids her age.  They aren’t boys and girls to me, they’re all just kids.  (Although I am embarrassed to admit I might not think it’s quite as funny if someone mistakes Jack for a girl – I don’t know why I have a double standard).

I also had a random lady on the beach stop me to say, “Oh Irish twins, huh?  They’re cute.”  Yes, thank you…. but no.  They’re not Irish twins. I wouldn’t mind if they were but they’re 2 years apart.  I think Irish twins have to be in the same year, right?  It doesn’t matter… I just found her opening quite forward.  Maybe that’s my New England showing through.  I certainly wasn’t offended… more just surprised.  Ok California. I see your forward and I’ll raise you cheeky.  You’re warned. 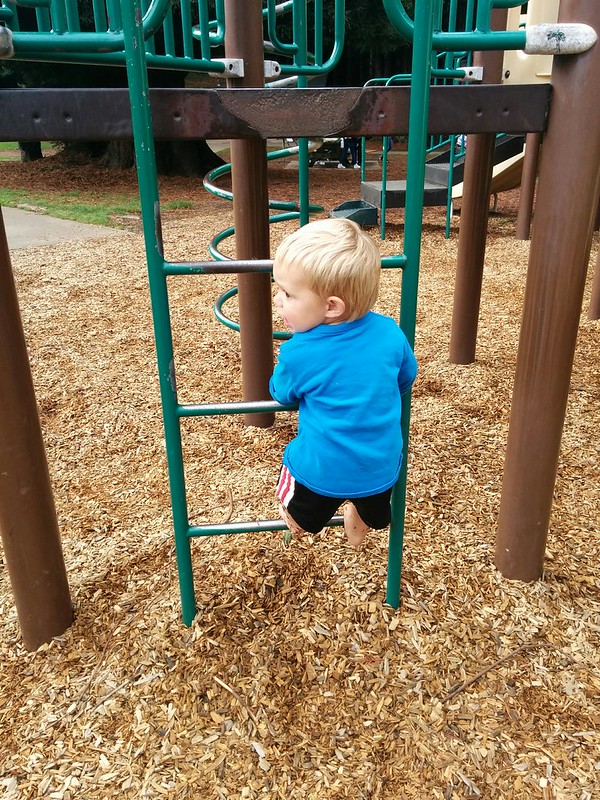 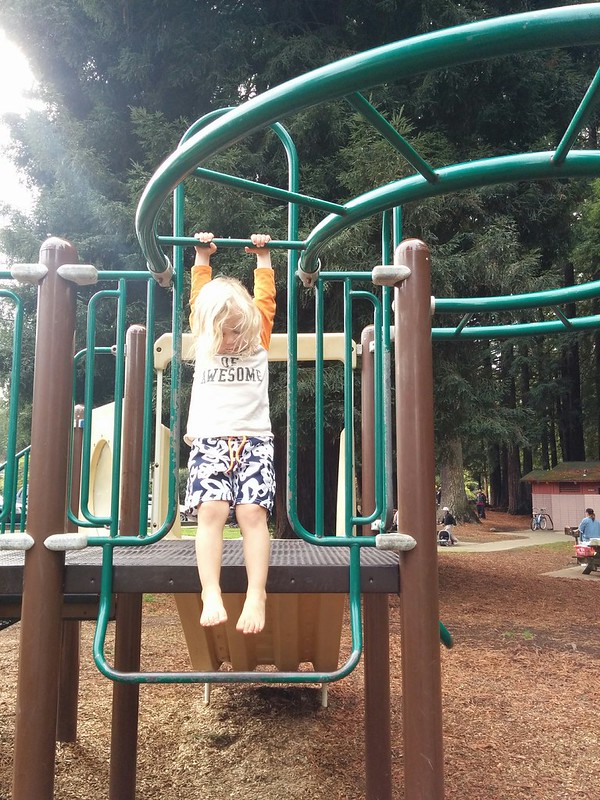 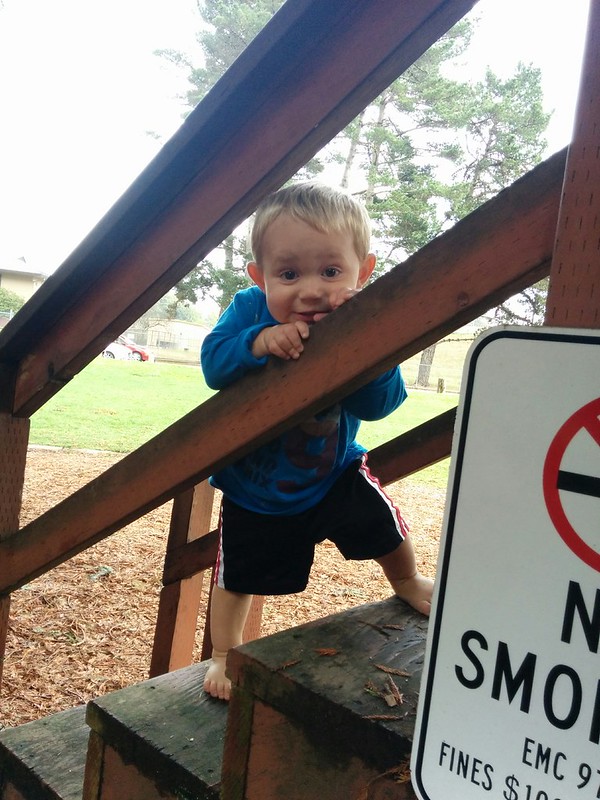 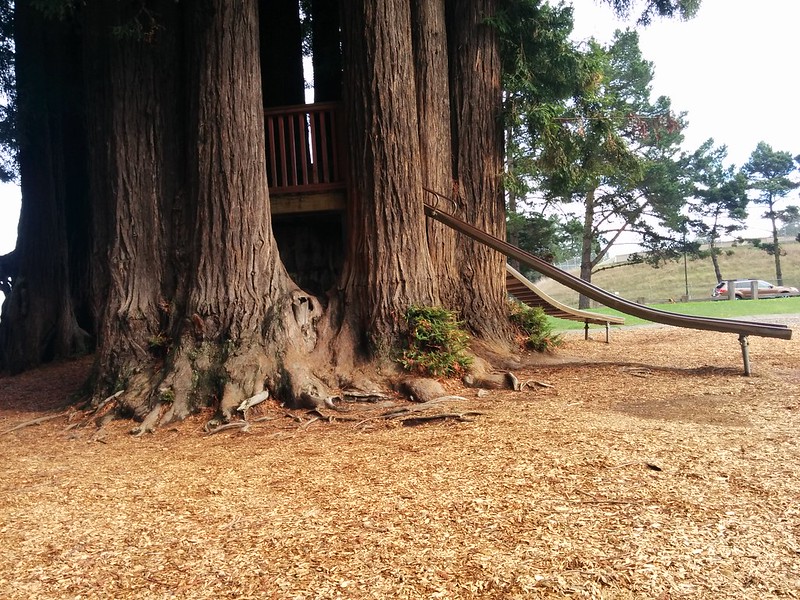 We’ll miss it up here – except a few things.  We haven’t dealt with moist yet.  To date our travels have been by and large prairie or desert.  The redwoods are all about water.  After a few days in a grove we discovered many of the things we left outdoors, the kids stroller for example, are covered in mold.  That is gross.  I have to buy some industrial strength vinegar and hope for the best.  I don’t like fungus.

Since we stopped moving for a bit I did have a chance to dig out the breadmaker.  I’m so glad we have this thing! 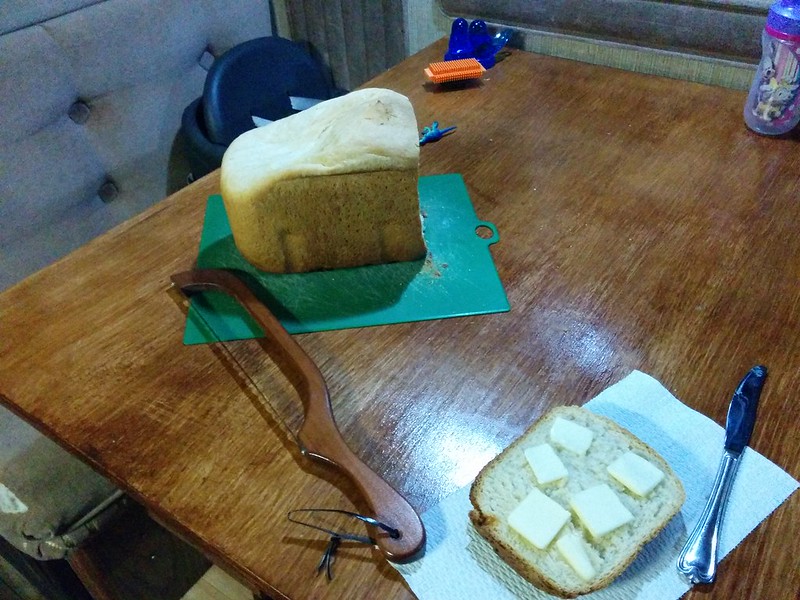 Dropping Mom off at the airport was every bit the disaster I expected.  It was double trouble... full waterworks from both of them.  She's a pretty big deal to the kids and the same level of excitement when she arrives...

Installing More Solar In My Ooutdoord RV Project PrepParts OrderedInstallationResults  Project Prep Today I doubled my solar wattage to 340 watts. That felt like it was right up there with, "Today, I made fire."  Maybe not quite, but it sure did feel...

The kids and I got the boot at 9:00am. Scott was antsy to start work and the kids were being... you know... kids. I threw together our beach bag, snacks and bathing suits and headed to the beach. What more...