We’re within days of reaching home so I was waxing philosophic about our year.  Specifically, I’ve been having fun reliving the challenges we’ve had. We had engine trouble (that time when the alternator died and I thought we were going to, too, in Houston), brake trouble (when they caught on fire in Vermont), overheating issues (in those damn California canyons), flat tires (because of that @$%#$ person in Arizona), the grey water spilled all over me (what?!  did I not write about that in San Antonio?) and the black tank hose reared and bucked mid-drain in Texas.

I took out the automatic step when I rolled over a massive curb and we got stuck on a road that turned into Sahara-level sand in Moab.  We spewed fuel for at least 20 miles in Pennsylvania (I’m not going back to that state) and Scott bypassed a smog pump to make the belt work in New Mexico).  We (Scott) even got stopped in Tennessee and drug dogs alerted.  Karma threw the book at us.  But we’re nothing if not serious problem solvers at this point.  A+ for effort.  So I actually said out loud (with a chuckle), “What more could possibly go wrong?!”  Challenge thrown.  Challenge accepted.

We got the tire all fixed up at that state park in Kentucky and we were on the road again by mid-afternoon.  The kids have never expressed much interest in my phone, but since they discovered that they could take pictures of each other, it goes missing regularly (which is super, wicked annoying).

Jack is behind the lens: 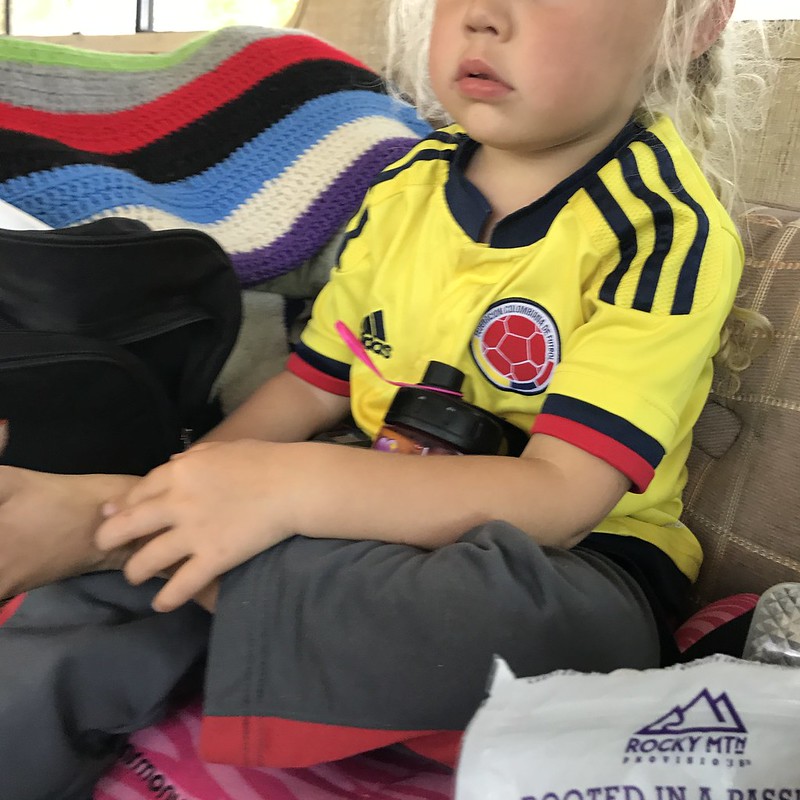 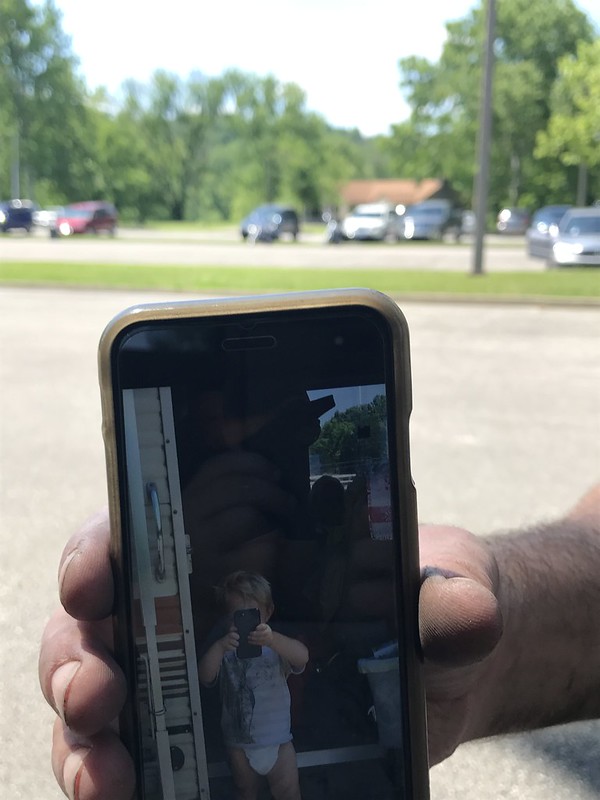 Since we got a late start, we stopped at a random gas station for dinner.  I know that sounds weird.  We literally pulled in, I made everyone go outside to play, started cooking and there we sat… eating dinner… at a Flying J.  Scott went in to buy drinks.  The woman behind the counter politely asked him to decline the woman who was going to solicit him for sex when he walked out.  They’ve been trying to motivate her to move on but it’s been an uphill battle.

I’m going to miss these little conversations that happen all the time out here.

While Scott is irritated with the Chief, I’m not.  I’m falling more in love with it the shorter our time gets.  With the sun falling the light was perfect to get some great photos.   Besides, we’re going to need some when it comes time to put it up for sale. 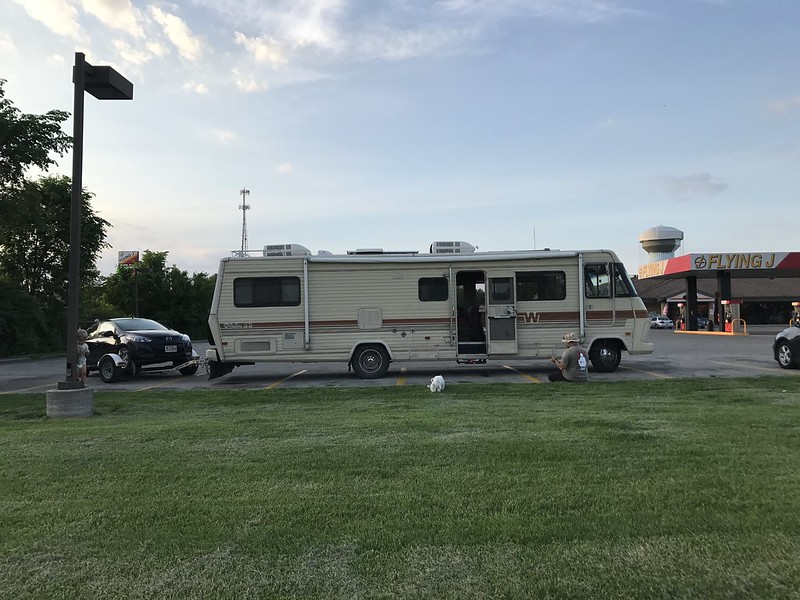 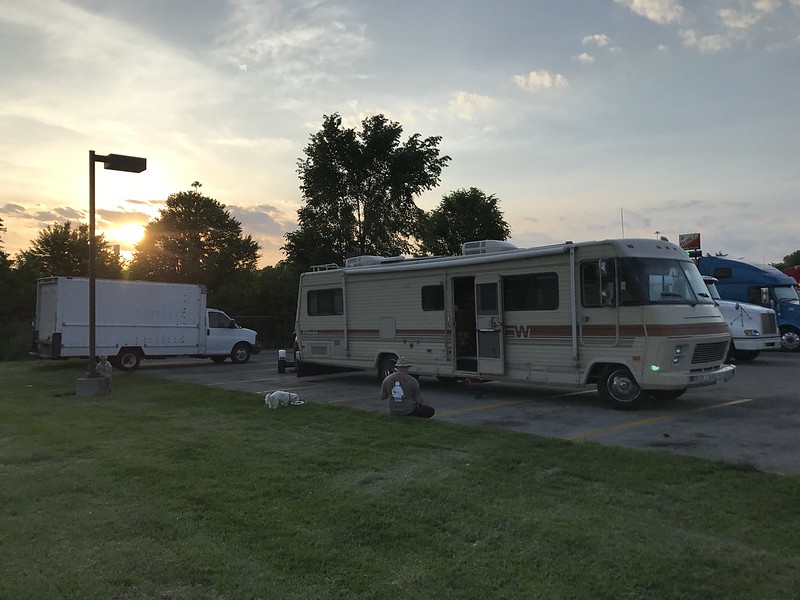 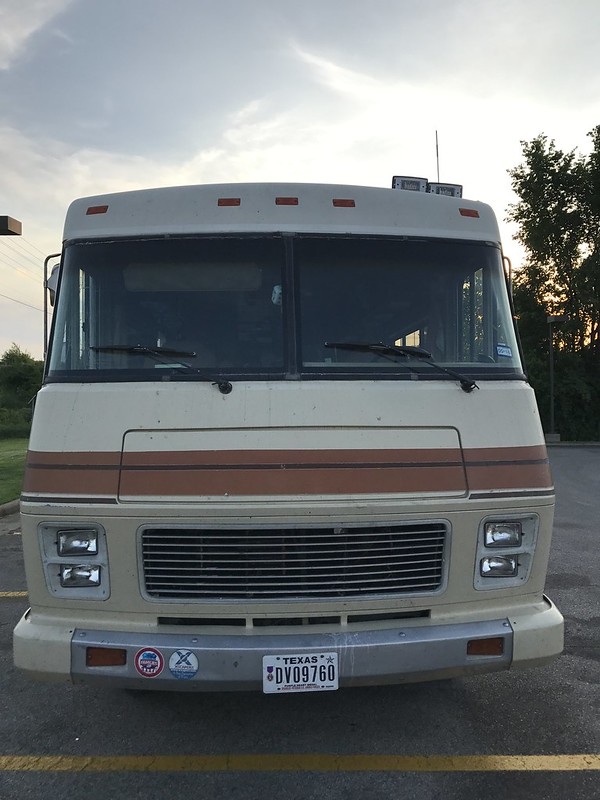 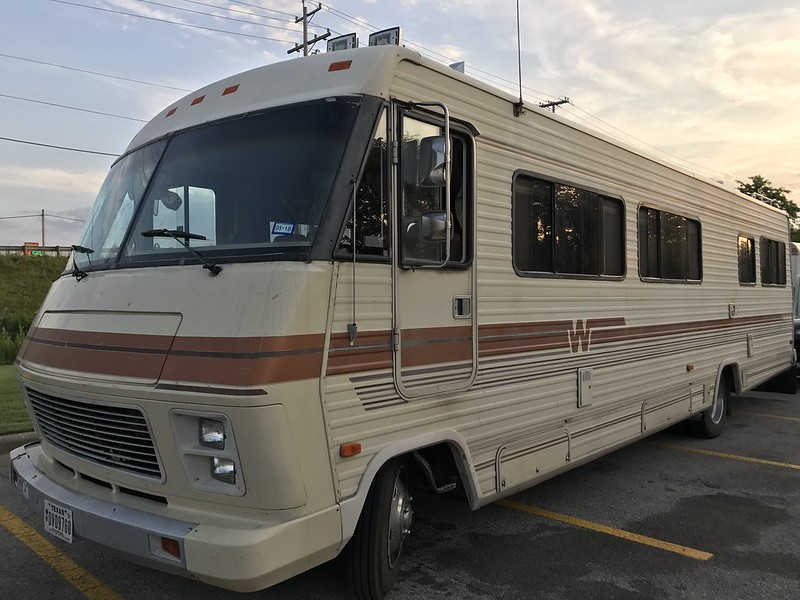 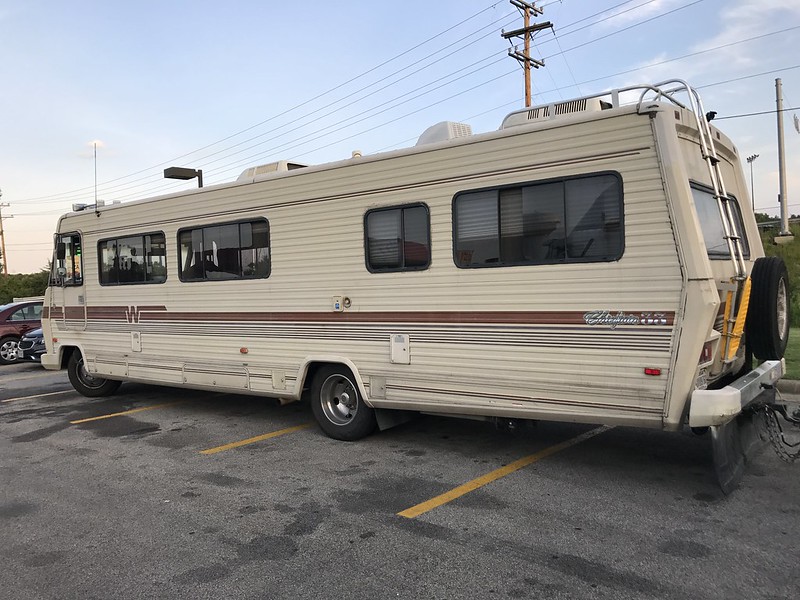 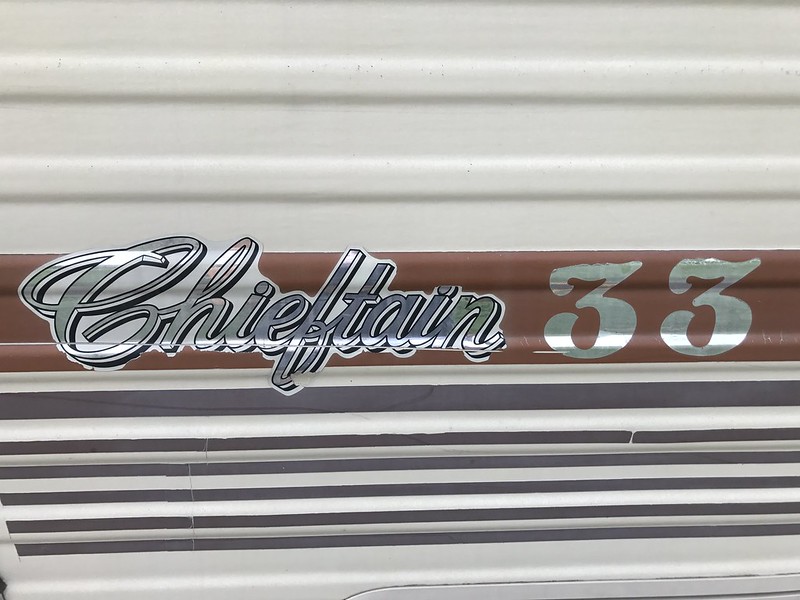 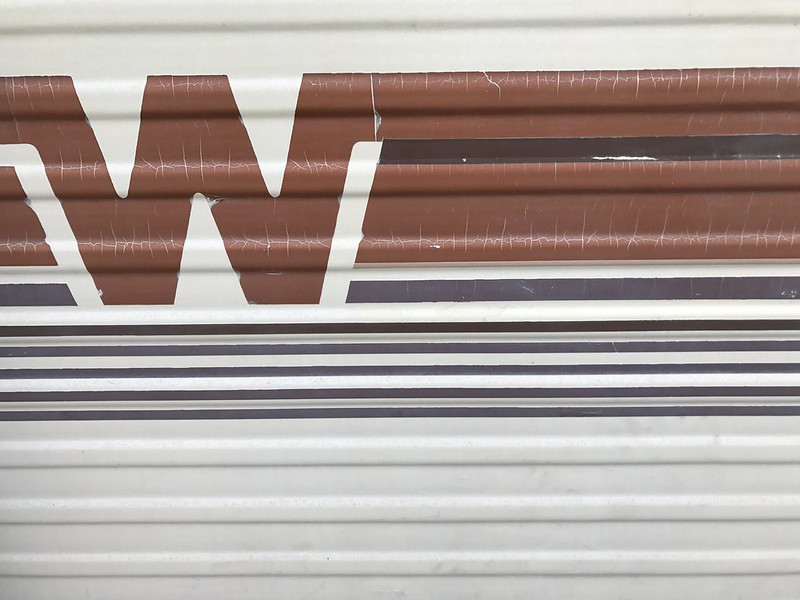 We had to put the spare tire on the RV which meant taking off the bike rack.  The Grey Man is a hatchback, so putting the bike rack directly on the window was a no-go.  We ended up having to put the bikes on the bed.  That’s all fine and good until you pull into a truck stop at 9 am and you have to rearrange everything.  That’s not cool. 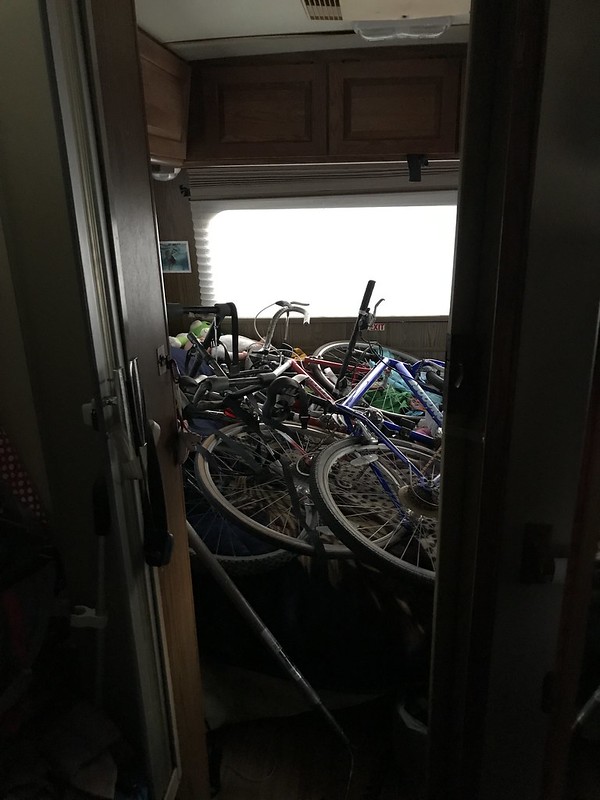 A bit down the road, we pulled in to get gas.  The plan was to haul while the kids were sleeping.  Scott, during his thorough security check, noticed the rear lights weren’t working.  Huh.  That’s weird.  I never would have checked!

He changed the fuse.  The lights worked!  Yay!  The fuse blew again! Boo! That’s bad – really bad.  It means there’s a short somewhere.  Oh good god.  The wires literally look like a rat’s nest under the dash.  There’s no pretty way to describe it.  It looks like a squirrel arranged them.  30+ years of add-ons and fixes have not been kind.   There’s no way we’re going to find a short without some serious investigation, so we did what any sane people would do, pulled the fuse and decided to drive only during daylight. 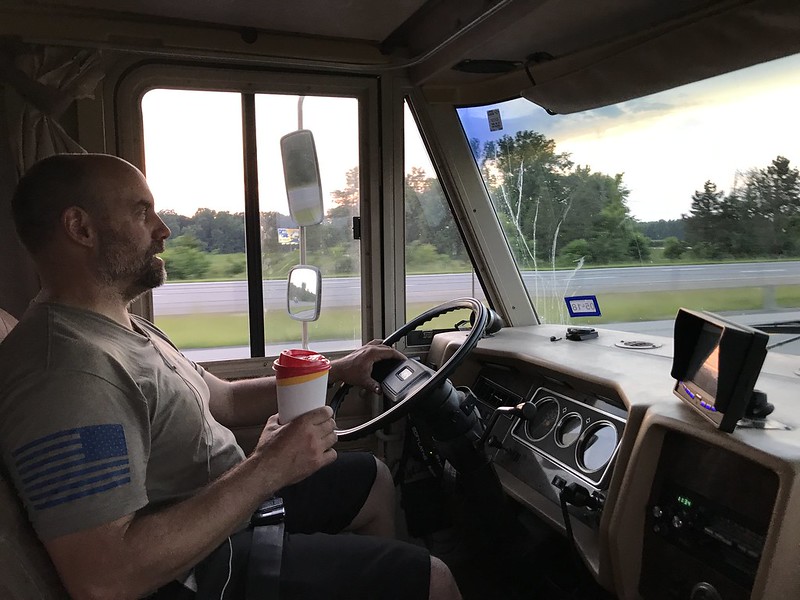 We woke up the next day.  After one more once-over Scott thought he may possibly (very unlikely) have found the short.  So he slipped some rubber tubing around the wires at a through-hole from the battery compartment.  The fuse blew again so we said, “Screw it,” piled the bikes on the bed and headed out.

I was driving.  Why does this stuff always happen when I’m driving?  I’m a good driver.

That little piece of rubber tubing he used to try to insulate the wires?  Yup, that got too close to the exhaust.  There were embers.  Scott had to use a fire extinguisher.  I wish I had been quick with the camera.  Unfortunately, the kids and I were outside watching smoke waft out of the RV.

In the end, it wasn’t a big deal.  Scott removed the rubber.  He hopped into the Grey Man and made his way to the nearest auto store. He bought some thermal tape (I understand that it insulates the wires and dissipates heat), wrapped everything properly.  We let the RV air out and off we went about 30 minutes later.

I’ll say this, my hat is off to the universe.  It’s getting creative now.  A non-scary fire in the engine?  Two words:  Well played. 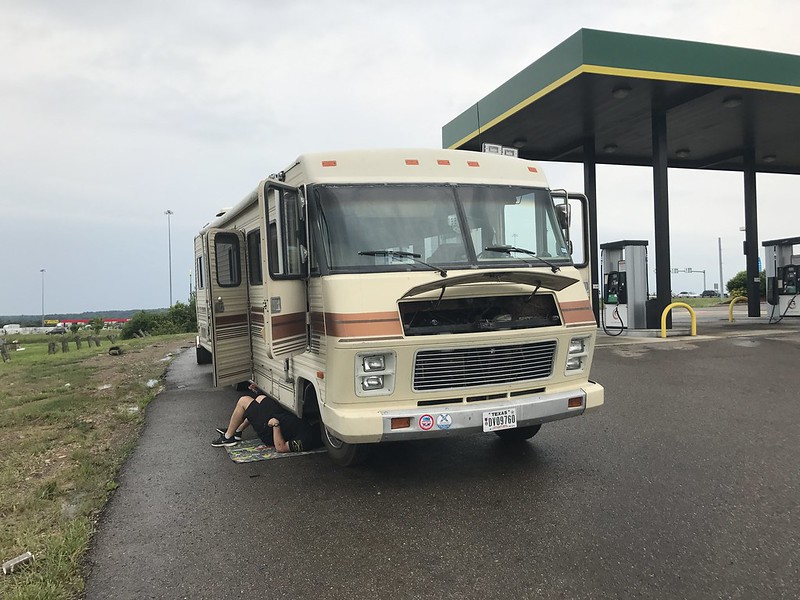 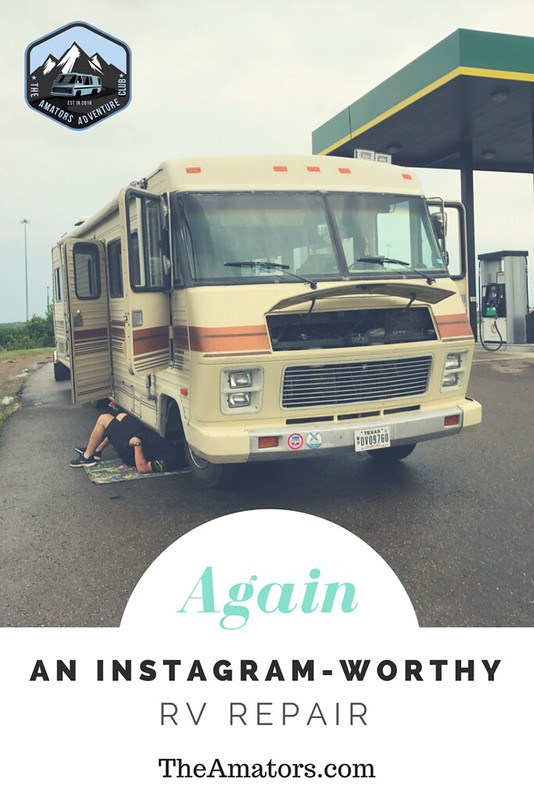 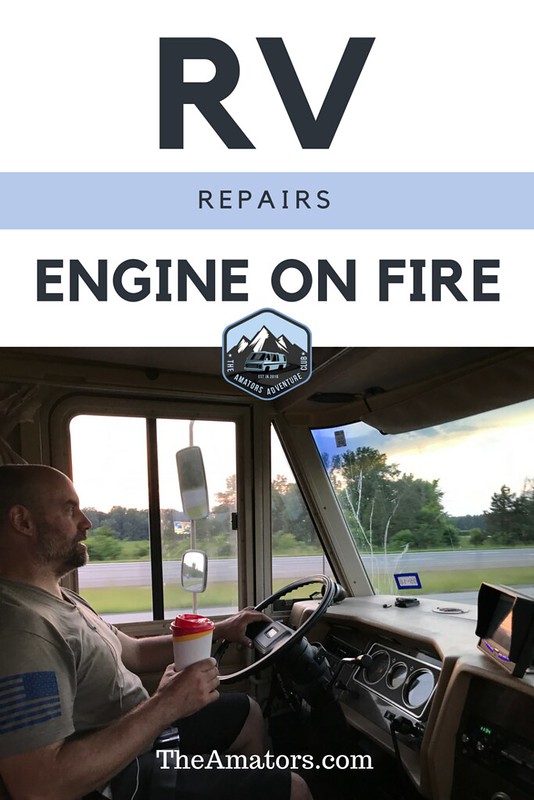 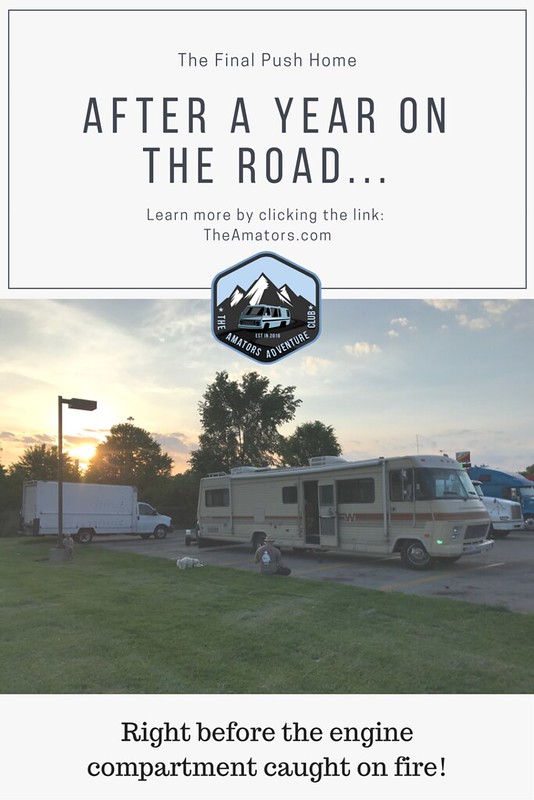 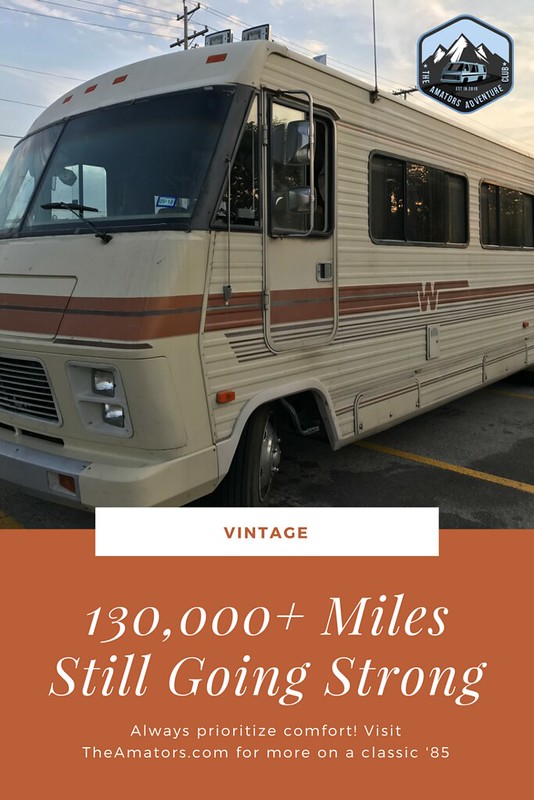 After packing his parachute, he and some of his friends made his way over to the crowd.  The Golden Knights had just opened the 2018 Great New England Air Show by flying the flag during the national anthem followed by an...

How the Amazon Affiliate Works and Why We’re Doing It

My girlfriends have asked me to explain a little bit more about the Amazon Affiliate stuff. What is it? How does it work? What do we get? How does it impact their Amazon experience (read: does stuff cost more)? Too easy....

I'm not one to forget a Do Not Miss. I collect those like other people collect shoes or tools. Before we set out for our first loop around the country in an RV, Kim said, "You must go to Sleeping...