Literally as we fired up the Chief to drive away from Reno I checked the website and the chains restriction was lifted on Donner Pass.  Until I saw that, we had been planning to head to Lake Tahoe, overnight and then cross into Yosemite.  It did dawn on me that we would still have to cross the Sierra Nevadas… so was it the best idea to avoid the main route through them in favor of less traveled roads?  Minor details to be managed by future Scott and Traci (which is often the source of some of our challenges).

With the restrictions lifted we decided to give the pass a shot.  I drove the Grey Man to lighten the load on the Chief.  The RV did great.  Even though the east approach is considered the steep side, at no point was Scott doing less than 40 MPH.  That’s a significant improvement than speeds going over the mountains in South Dakota and Wyoming (~20 MPH).  The roads were bone dry but there was still plenty of snow at the summit.  Evie begged to be let out to play, but the rest areas were closed for snow removal and without a real parking lot, stopping wasn’t an option.  I had the radio going full force in the Grey Man and I was using The Secret to tell the universe exactly how I expect these next 6 months to go.  It was a super fun morning. 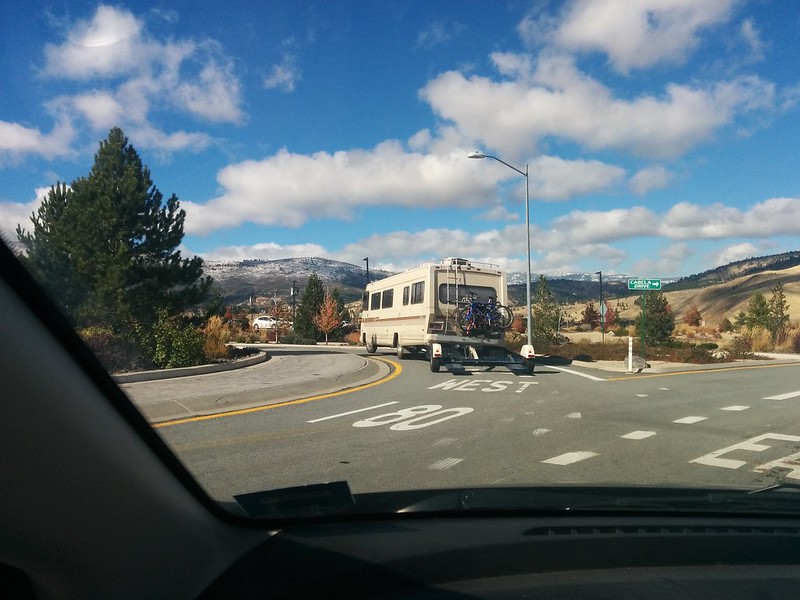 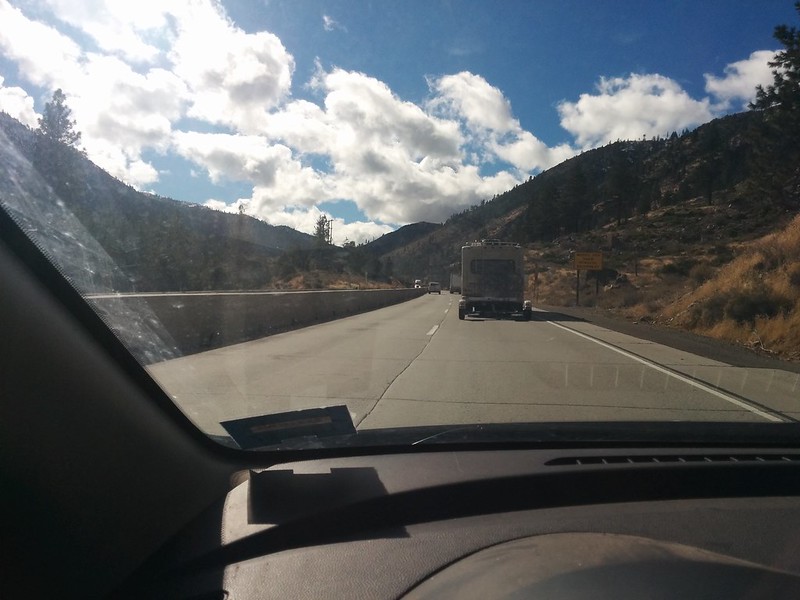 Once we were on the downhill slope in California, I called Scott and threw him a curveball.  Why not skip Yosemite for the time being and head straight to his sister’s house (less than 2 hours away)?  Of course we want to see the park.  I’ve always maintained that Yellowstone and Yosemite are high priorities this year.   Specifically we would both love to see climbers on El Cap and the incredible sequoias.  But it’s going down into the low 20s at night right now and with the snow… RVing just isn’t as fun for us when we’re cold.  I can take chilly, but worrying about things freezing isn’t where my adventure button gets pushed.  There’s still plenty of time left in the year to figure it out.

Scott was concerned with a surprise ambush of Ang and Brock.  The little people are nothing if not busy bodies which could be a lot to take in if you’re a young married couple living the adult urban experience.  I texted.  It was ok.  So we found ourselves navigating a cute little California neighborhood just outside San Fransisco on a sunny afternoon in the middle of the week.  We got a lot of looks.  The neighbors are definitely aware we’re here.  One guy helped Scott do a 29 point turn in a cul-de-sac (equal parts helpful and worried about his car) and I met a woman who is going to groom Boston next week.  We have arrived. Man doesn’t it feel nice to be in a home with family for the night!

Just completed a year-long tour of the U.S. in this vintage class A motorhome. It was an outstanding home and well-loved under our care.  She's got a lot of life left in her. The Stats 33ft long Sleeps 7 comfortably Onan...

I've read about petrified wood but hadn't seen any.  Ditto for Scott.  When we saw a sign for a petrified wood garden just outside the Badlands, our thought was, "Eh, why not?!"  It was $12 for the both of the...

DISCLAIMER: I may make a commission off of the links on this page. Total cost of the repairs in Watsonville: $800 and some change.  I think it was $350 for parts and the rest was labor.  They replaced the solenoid...