Scott is an alumni of Patriot Boot Camp, a Tech Stars sponsored event.  It’s 3 full days of talks by successful entrepreneurs, individual meetings with mentors and access to resources that are intended to jumpstart small veteran-owned businesses.  He first attended in 2013 with his “My Dad Reads to Me” idea.  An oldie but a goodie…. but that died along with the Kickstarter campaign.  He returned this past weekend with his current company.  If you’re interested in the event, ask him about it.  Seriously.  He loves to talk about it and they have more coming up.  If you’re a veteran or a veteran’s spouse with so much as an idea to start a company, he’ll talk you into going (and it’s free…).

While Scott was working, the kids and I had a few days to explore San Antonio.  My best recollection of the city was from my first visit when I was in the 6th grade.  My brother had just graduated from boot camp at Lackland AFB and we went down to celebrate with him.  Walking along the Riverwalk, a bird pooped on his shoulder (in his fancy blue uniform) which caused a minor crisis for the newly minted airman.  To an 11 year old, that was highly entertaining (… and it still is).

I don’t like campgrounds, but oddly enough, there is very little BLM land around major cities.  They do usually have one major benefit (beyond showers and laundry): playgrounds.

It is my personal opinion that Texas, New Mexico and Arizona really ought to put something out to the effect of, “Just a heads up, we get a version of winter too. ” I really didn’t think this part of the country got cold.  It was above freezing so I guess it’s technically not “cold”…. but when it’s in the 40s and windy… we generally don’t want to go outside to relax.  I made us, of course… because we’re lucky enough to be doing this and we have everything we need to stay warm. 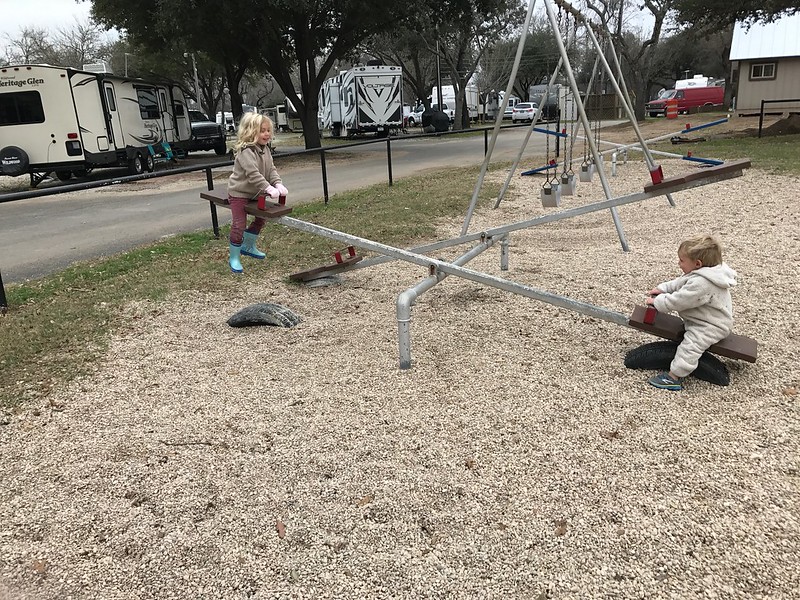 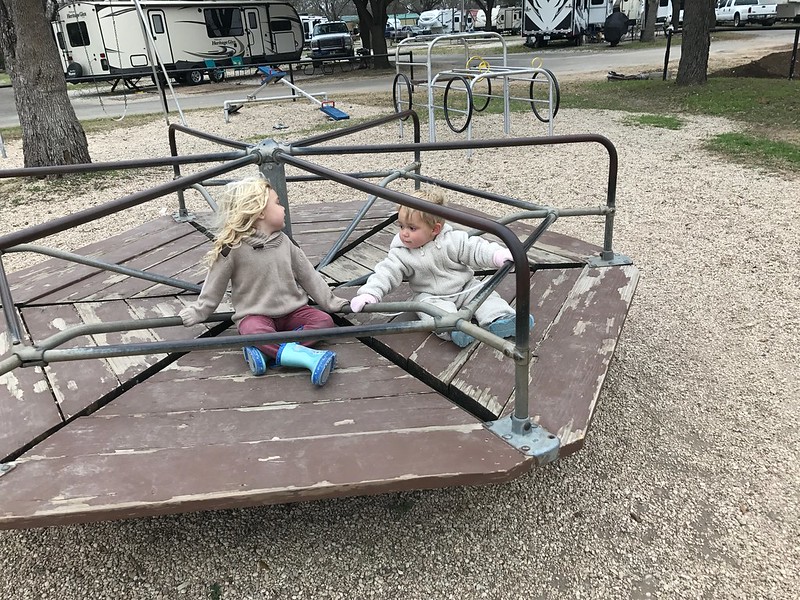 Poor Jack and all of his hand-me-downs from his sister.  The day will come when he will no longer tolerate powder pink mittens and Elsa socks.  But for the foreseeable… I’m not tossing perfectly good clothes. 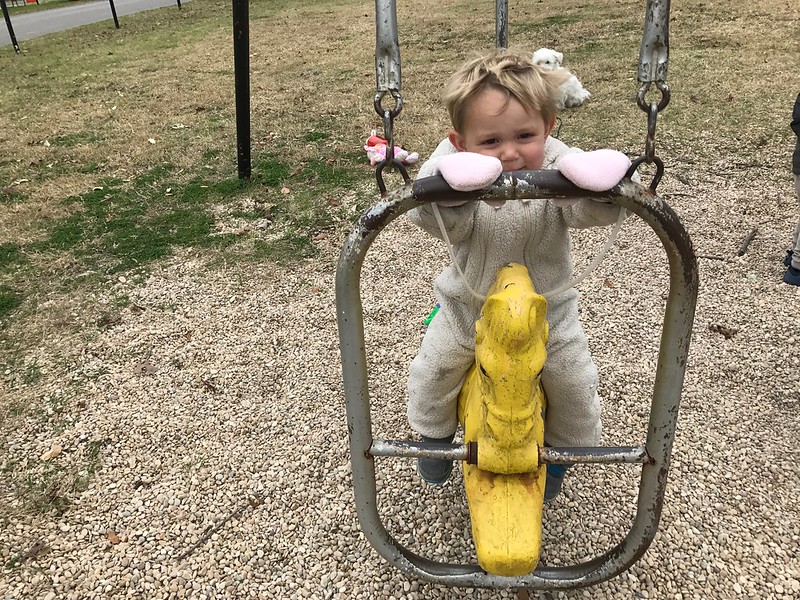 I was looking for something to get us out of the RV again in the afternoon/evening.  There was a First Friday art event going on at HemisFair park.  I had no idea what it was… but why not?  Turns out… the park rivals all the great parks of our trip (including the best one in Cincinnati).  There was a ropes course, statues to climb on (NM state parks…. you should look to your neighbors to the east for some tips on how to be kid friendly) and life size games.  Even better, there was live jazz music and vendors selling local food.  Despite some cold damp weather, we stayed and played for well over 2 hours. 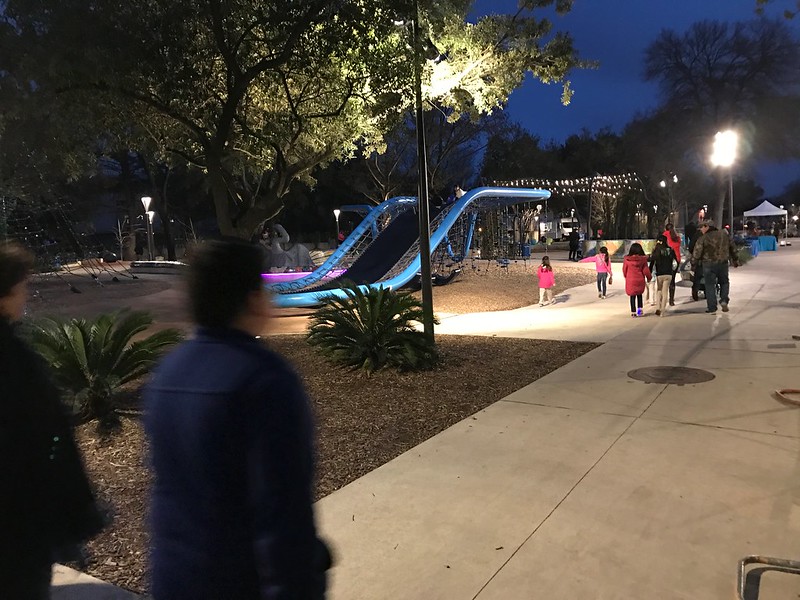 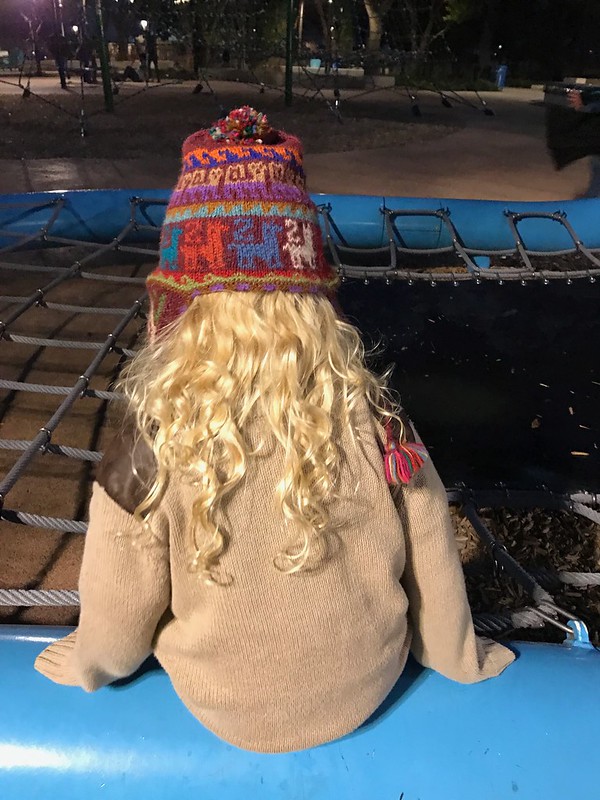 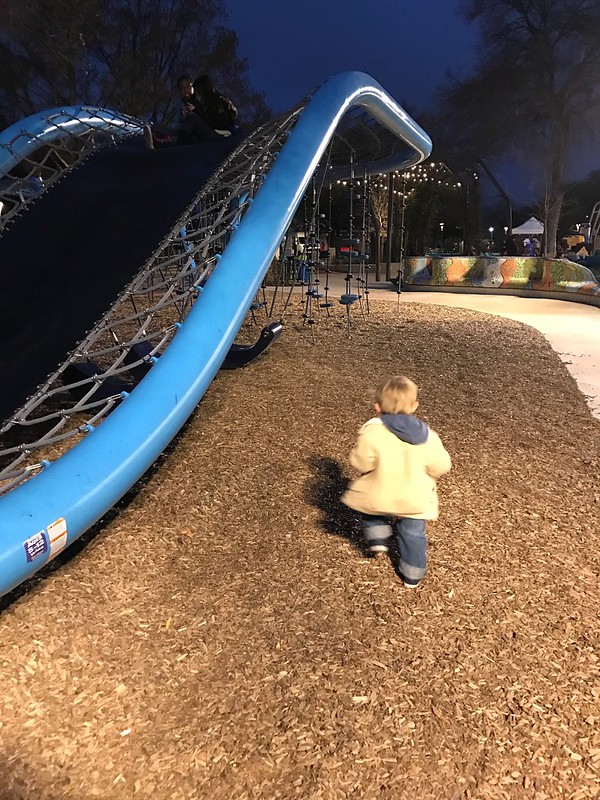 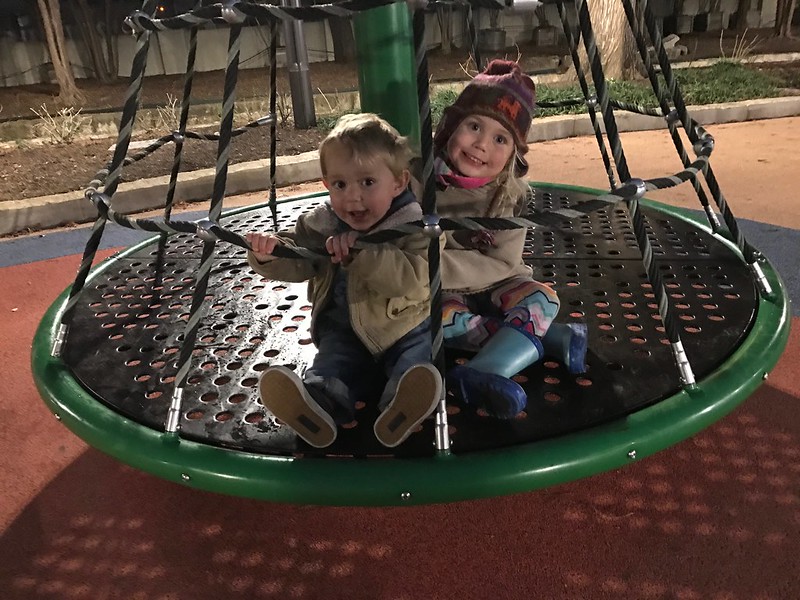 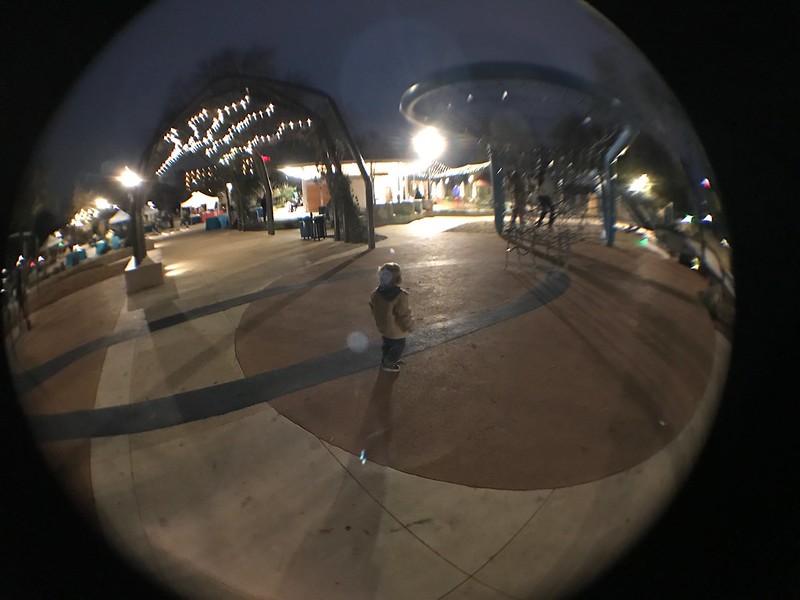 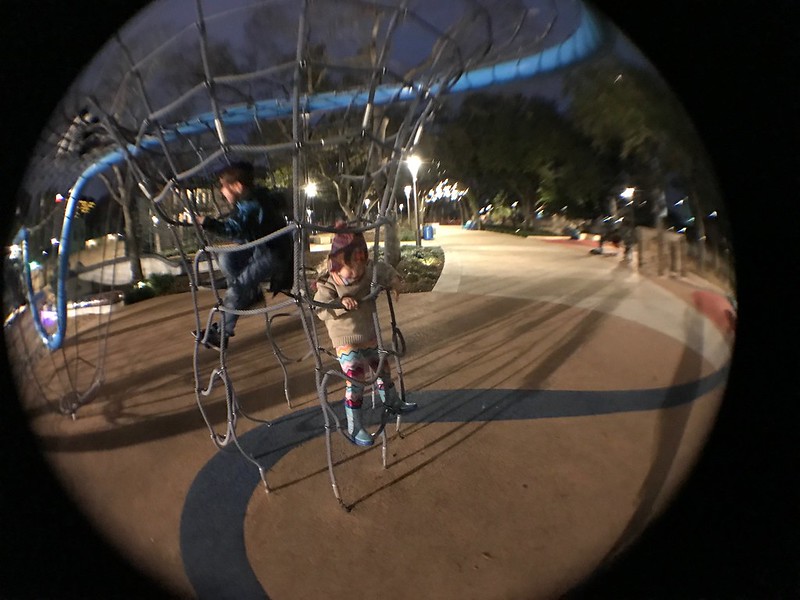 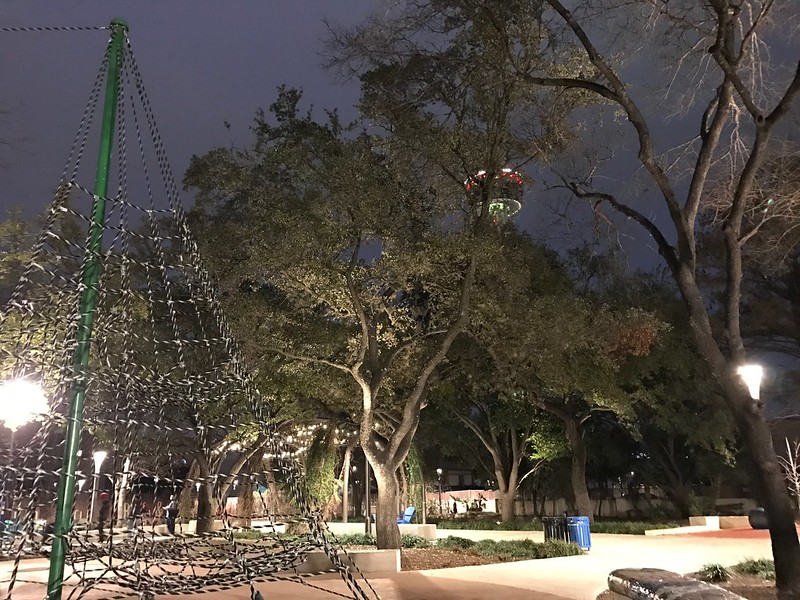 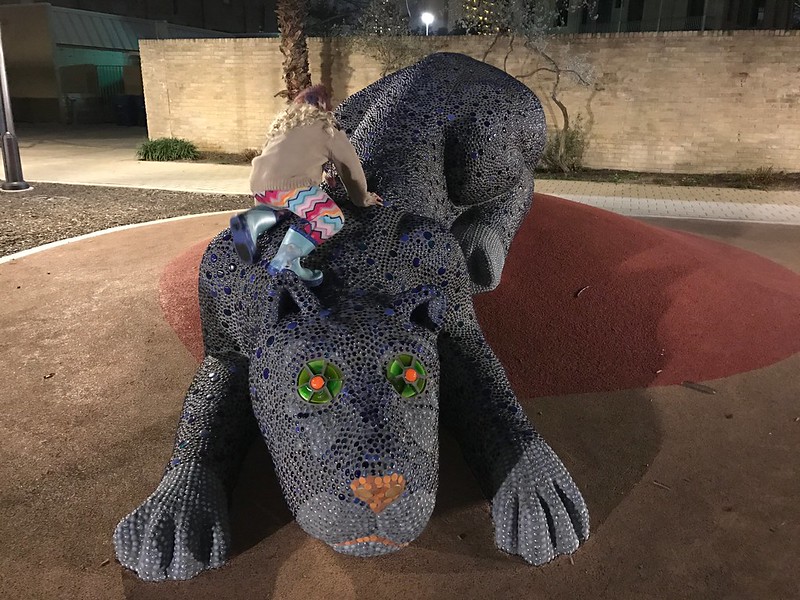 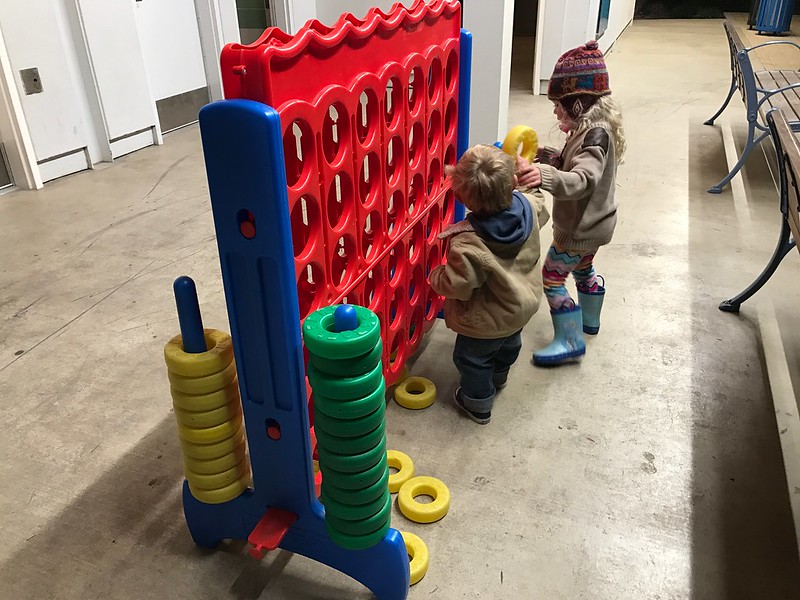 My only concern that night was a sketchy looking character leading a policeman into the men’s room (right behind the kids in the last picture).  That’s what I like to call “a clue”.  I didn’t know what was coming out, but I know we didn’t want to see it.  Roger that.  We headed back to the car just in time to pick Scott up from “work” and head back to the RV.

I’ve got a question but I’m going to lead into it.  Scott and I have been encouraged, supported and high-five’d every step of the build up to this sabbatical.  I can’t tell you how many times I’ve heard, “That’s awesome....

Something happened today.  My feelings are mixed - on the one hand it was really sweet, kind and well intentioned.  On the other hand, it was bizarre and I’m having trouble wrapping my mind around it.  It’s gonna take a...

Back Again Scott’s been on me lately.  “Why have you stopped writing... again?”  That makes me happy.  He likes the blog.  So do I.  Here’s the thing, we’re homeschooling, traveling far too much (I still overestimate how much can be...