The plan leaving JTNP was straight forward.  Hit Indio, CA, dump at a free station, head south on Rt 86 along the Sultan Sea, turn inland at Rt 78, go west to Anza-Borrego Desert State Park.  That’s ground zero for the bloom.  After a nice picnic, continue on to visit family just north of San Diego.  That seems nice, right?  Easy day.  3 – 3+ hours of travel.  Something unique to see along the way.  Why do I always think, “Easy,” right before the very worst that gets thrown at us?  From now on, this will be a clue.

Bottom line – we narrowly escaped serious badness several times on this “easy” day.  At times we were laughing so hard we were crying.  At times it was too much to talk.  There were even a few times the kids didn’t dare to breath loudly.  I am now rated NASCAR level pro in the 30 ft + category – not for speed, for ability to make tight turns under extreme circumstances.

When we turned off the Sultan Sea, life was good.  It was hot day.  The sun was out and bright.  Traffic was light and hauling.

First off, Ocotillo Wells, CA seems to be a world-famous ATV/motor bike location.  I’ve never heard of it.  But let me clear – that means nothing…. I didn’t know about Moab either.  I’m not your go-to for ATV/motor bike information.  There are 100s of miles of trails and RVs scattered about boondocking.  All that and yet there is no place to get gas for well over 100 miles.  Thanks.

It’s desert.  Not Egypt-level Sahara desert… but “no-water” desert nonetheless.  There is no green. There is not a lot obviously living.

We arrived at the turnoff for A-B Desert State Park.  I pulled onto the shoulder.  20 miles more up to the state park.  We weren’t seeing anything living… nothing blooming. Turns out… we were about a week ahead of the official “super bloom”.  By the way, I think that might be a creative way of saying “we have A flower blooming out here… call everyone”.

If you’re familiar with southeastern CA, you probably know RT 78.  I suspect it’s famous.  If they run rally races up Mt Washington then this road has to be on someone’s radar.  We should have known when we saw the first “No vehicles over 35 ft”.  Being a sold 2 ft less than the warning, I continued.  Bold.

Have you ever seen those old movies of Grace Kelly riding around Monaco in a sporty little 2 seater… her scarf blowing off in the wind?  It was like that.  Hair pin turns.  100 ft vertical drop off in place of a satisfactory break down lane.  No turn arounds.

By the time I could pull over (the first time), I let 22 cars go by.  Understandably, some drivers expressed displeasure at my modest 25 mph speed. 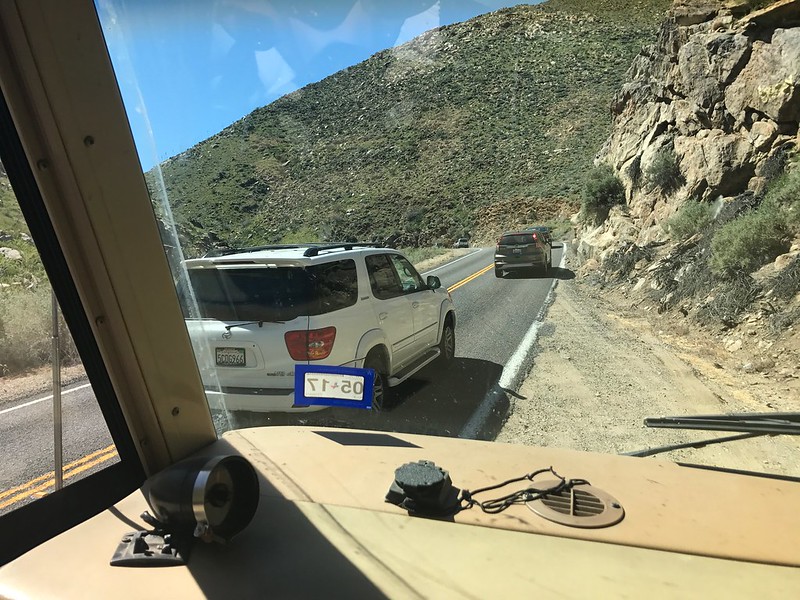 I pulled back out and continued on… honestly… because there was no other option.

The second time I pulled over, 17 cars went by.  Apparently the news of the “super bloom” drew a lot of spectators.  Awesome.

Back on the road, after a few moments of silence, I said, “Mom, are you going to take some pictures?  I know it sucks but some of this is stunning.”  Mom, “No.”  {pause} {pause} quickly, “I can’t move.”   There really is no response to that.  Carry on.

A little bit down the road, I’m concentrating but the worst is really over.  Mom, “Soooooooooooo…..” Me…. waiting patiently for the next words.  Mom, “I don’t want to scare you……  but there’s something I think you will want to know about.  I’m not sure…… so maybe it’s not something to worry about…. but just in case, I wanted to tell you sooner rather than lat….”  Me, “TELL ME!!!  TELL ME NOW!!! WHAT THE HELL IS GOING ON?!?!?”  Look, I have a limited amount of patience.  It’s a best practice to not make me use it all up waiting to hear what may or may not be an issue in the rapidly approaching future.

Mom, “Well… see those cars on that cliff over there?  We may have to go on that.”  She’s pointing to a road on the other side of the canyon – the one paralleling us. No, we are not going to have to turn around and go due east to get to our destination (due west).  Clearly her navigator skills need a little refreshing.  Crisis averted, breathing resumes, blood returns to hands.  Bonus – we have a new rule.  If in doubt, say it immediately with no qualifiers.  Rip the band-aid off with no remorse.

Finally we get to a point where we can turn off and take ‘the long way’.  I might have been tempted to stay the course and just get it over with but there was another sign, “No vehicles over 40 ft”.  Damn straight, Universe.  I got you.  We’ll take the long way.

Still no gas.  Now we’re at half a tank.  But let’s not forget… the bottom half of the tank is surprisingly smaller than the top half.  What is up with you people from the 80s?  Half should be HALF.

We relaxed a bit and started laughing…. No cars in sight…. This whole thing is too funny…..SLAM ON THE BREAKS!!!! There’s a line of stoped cars just around a bend as far as the eye can see.  What on earth….!!?!?  Turns out everyone and their brother wanted to see the super bloom.  A T-intersection on a 2 lane road in the middle of cow-country CA caused at least a 10 mile back-up in traffic.

Deep in stop and go hell, headed down a substantial grade, the engine started overheating.  See how, on the bottom, the line is pointing to hot?  That’s not right. 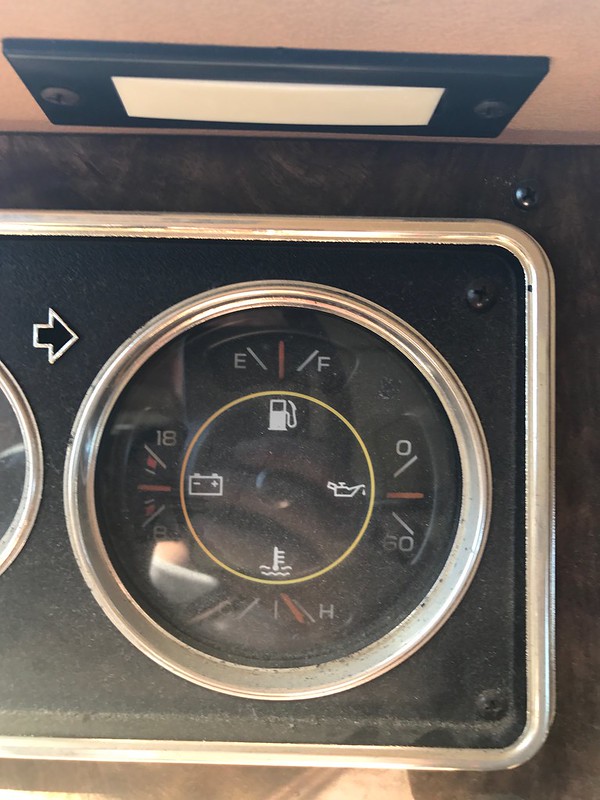 I pulled over to let the Chief cool down.  We hung out for about 10 minutes.  California drivers are so rude that it was actually hard to pull back out into traffic.  We have a few names for those kind of drivers in Boston.  My personal favorite is: Douche Bags.  The kids now understand that to be a very very bad word that mommy occasionally mumbles while driving and it should not be repeated.  It’ll be repeated at the most inconvenient time, I’m sure of it.

Finally, one last major mountain range to cross and then we’re into orange country and home free.  Being that the engine had already almost overheated, I was cautious.  So cautious that the breaks started smoking.  We smelled it first.  Mom popped her head out the window, pulled back in quickly and popped her head out again.  I pulled over.  She went out to investigate.  Mom, “Yup, they’re smoking.  I really hope they’re not on fire.” Me… oh god, not this again.  Mom, “No the smoke is going down.  They’re not on fire.”  What are you supposed to say to that?  Great?  Is it honestly great that things aren’t on fire even if they’re billowing smoke?!  I don’t know.  I was so beyond done I think I was actually genuinely happy that they “weren’t on fire”.  Go team.

After another cooling down period we got down the grade.

Mom called our cousins to give them an ETA.  They’re so sweet.  Lori is my dad’s first cousin.  He walked her down the aisle at their wedding.  She and her husband Rick were so welcoming and warm.  Salt of the earth types.  Genuine.  “Come right into the driveway.  We have plenty of space.”  So I did.  But, in the spirit of the day, that turned out to be… challenging.  See, they have breathtaking views from their home… on account of the fact that they live on the side of (you guessed it) canyon.  Their driveway is the steepest driveway I have ever seen.  Not hyperbole.  Truth.

I got the Chief to the top, but the car (still attached) remained on the steep part.  The word that comes to mind is “dangling”.  I choked the wheels (all of them, in fact) and went inside the house.  I knew I was going to have a mess to fix later but I really needed to not be making big decisions for a few minutes.  Mental health was the priority. 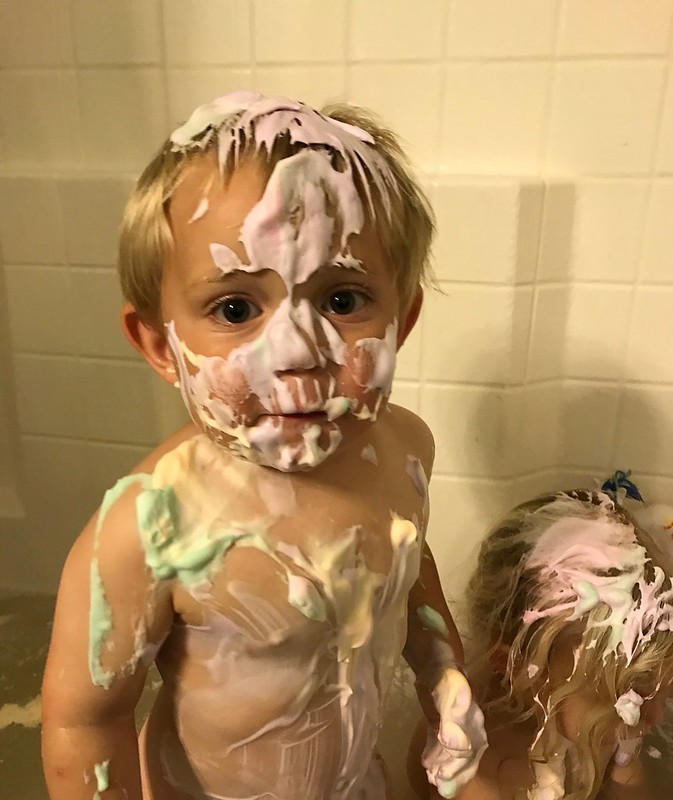 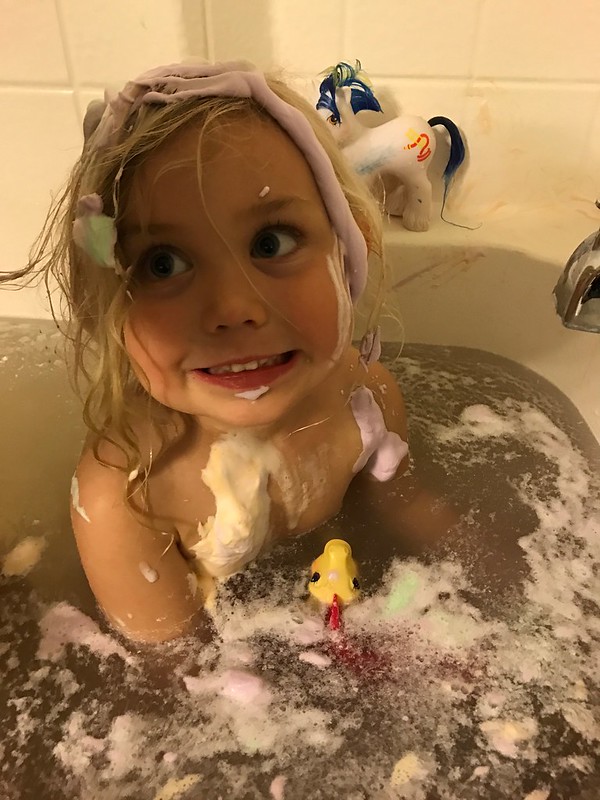 These pictures don’t do the driveway justice.   Not even close.  I could take a picture of Mt. Everest and make it look like a milld bump in the road.  I have a hard time capturing verticality in photos.  These were taken the next day, after I took the car off, turned the RV at the bottom and BACKED IT up the driveway.  It was too steep to try to maneuver the dolly down the driveway by hand (even with 3 capable adults).  We attached it to the Chief at the top so the brakes could do the work.  The deep gouge in the driveway was done by yours truly… the hitch hit and dragged because of the angle.  We were royally screwed…. 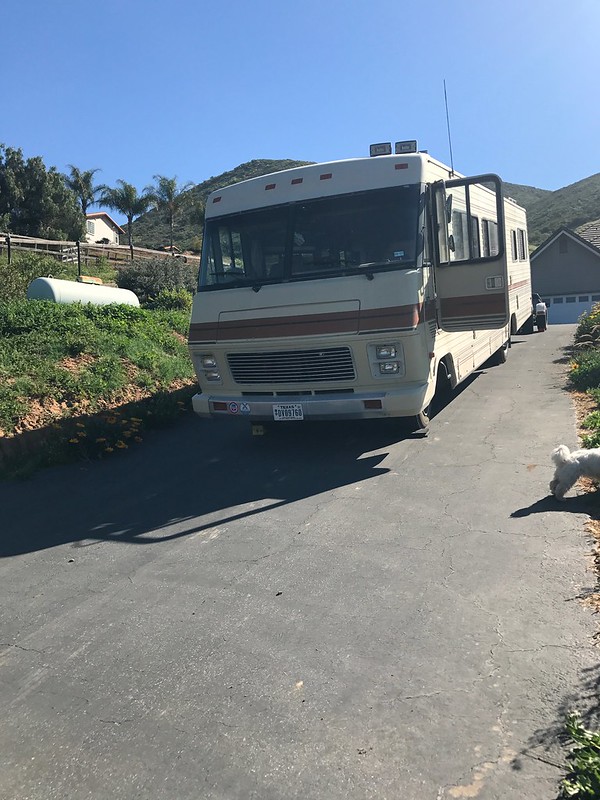 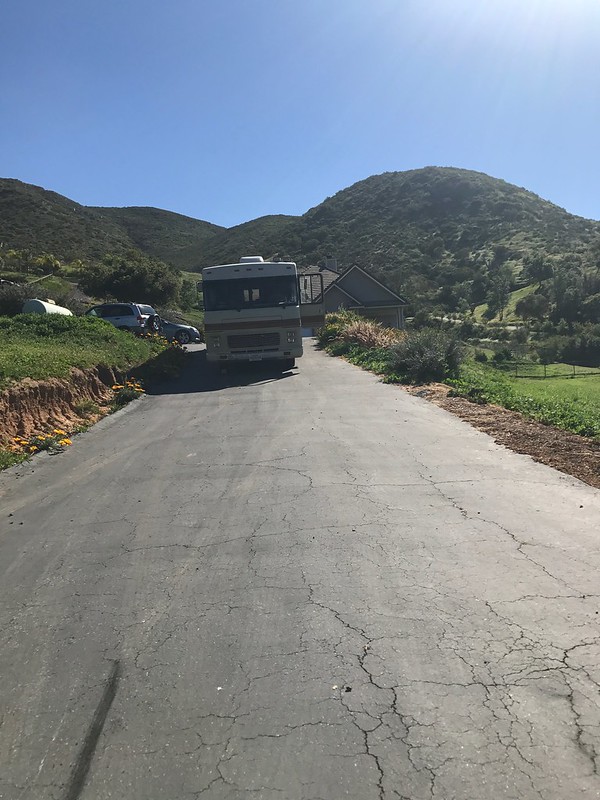