We’re still figuring out where to go, when to leave, etc.  I’m not gonna lie, it’s a little frustrating.  I’m not entirely sure what the hold up is apart from me being flighty and struggling to reconcile some tough requirements (i.e. someplace to stay that averages less than $20/night – we’re no longer well off so I have to adjust my expectations).  I’m doing a little reflection to figure out what the energy block is during my downtime (just kidding… I don’t actually have downtime).  Meanwhile, DRD4-7R is restless.

I don’t care be repetitive so I won’t go over the options again.  I did, however, add a new one.

I spent most of last week totally engrossed in thinking we were going to finally buy that boat I’m always talking about.  I spent long enough on it that Mom thought it might actually happen.  That scared her into action.  She contacted one of her closest friends who is a sailor herself and happens to be married to a very accomplished sailor.

I think he was supposed to talk me out of it.  However, I had already seen the writing on the wall.  We had the following exchange:

I understand that you are considering taking off on a boat. Sounds like quite an adventure. I am sure that you have done some research. There are many ways to go, many things to consider; type of boat, size of boat, gas versus diesel, the condition of all systems on the boat. Your experience level. Please consider these from all angles.

After you have figured that out, it comes down to Where to go and When.

The intercoastal waterway is a good way to travel. A little more sheltered and available services. I have been told that you can anchor in many places along the waterway. There are times of the year when it becomes congested, like any north-south highway. There are many in-depth articles on traveling the waterway.

Choose your boat and course carefully.  If you have any particular questions, feel free to ask.

I will leave you with the sailor’s benediction.
“May you always have a clean bottom and a fair wind”

Thank you for the email, especially the last line.  That got a hearty laugh.
Where do we stand?  Let’s see.  Scott and I have and will continue to dream about the day we get on our boat.  In my ideal world, that boat is a 40′ Leopard from South Africa (owner configuration) with solar and/or a wind generator already installed.  But who has $500k to throw around these days?!  More realistically I started looking at 1960s-1970s monohulls that had some significant needs.  You can imagine how excited Mom was about that…. taking her grandkids on a great adventure in a “probably seaworthy” vessel while not knowing how to sail.  It’s sort of her worst nightmare.
After several days of pouring over blogs, boattrader.com and salvage websites (apparently all the lightly damaged boats from Irma have already been scooped up), I’ve put the boat dream back on the shelf {to be dusted off in another few years, no doubt}.   The cost of the boat itself doesn’t scare me.  I think I could find us something reasonable for $20-25k.  {In fact, I found a beautiful little sloop made in the 30s that I just love for $25k in San Fran Bay.)  Scott and I prefer to pay outright for our vehicles to avoid any sort of payment.  But it’s what happens after we buy the boat that becomes problematic.  While we absolutely loved boondocking in the RV, it wouldn’t be quite as easy dropping the hook.  Based on what I read, there are plenty of public areas where that’s possible on the east coast, but those spaces aren’t necessarily near beaches.  I can’t just let the kids run around on a boat and I’m certain our island would become very small very quickly.  Being in a marina doesn’t solve that problem entirely and adds a whole new scary factor.  Is it really $60-$120 a night for a berth?  That’s highway robbery.  We would be transient, so we wouldn’t be able to take advantage of the longer term discounts.  That’s the cost of a hotel room….I didn’t realize that part was so expensive.
We would also need to get lessons (again) to refresh our memory on how to handle a boat.  That wouldn’t be easy to pull off with a 5-year-old and a 3-year-old running around. Add to that the fact that the kids can kinda sorta swim in a pool…. maybe spending 100% our time on the ocean isn’t really the best option right now.
Maybe when they’re older?!  I know people say that. I actually mean it.  I love the idea of doing the Great Loop… then once we have some experience under our belt while in sight of US soil, hit Florida, point it toward Bimini and set out to find Atlantis (either underwater or the resort in the Bahamas…. I don’t really care which).
When the time comes I will rely on your advice heavily.  You’re the only real sailor I know.  Sure, we know plenty of navy guys…. but they don’t necessarily know how to handle a small craft anymore.
Cheers,
Traci

Scott snorted laughter at the navy comment (Go Army!) and told me I needed to put the email in the blog.  So here it is, captured for the family record.
This is what I know.  The travel itch is getting worse.  Which brings me back to DRD4-7R.  That is the allele, or gene variant, otherwise known by it’s sexier name, the wanderlust gene.  I have it.  I suspect I got it from my mother’s father (the one who taught us about energy balls and allegedly destroyed psychic surgery for Filipinos… long story).  Scott has it.  {Good job finding a compatible mate, Traci.}  We need have an adventure.  It feels something like the compulsion to breathe.  Furthermore, the adventure has to be on the cheap (because reality).  It should be exotic enough to feel like something different (i.e. outside the U.S.).  We want to taste the hot spice of real world. Ideally, it will also be someplace warm.
I’ll be edgy until we’re on an airplane.  After that… I’ll be writing.  Where we’re going, there’s sure to be plenty to talk about in the blog.

Beloved postcard from Prague.  We miss you Marc and Kathy!!! 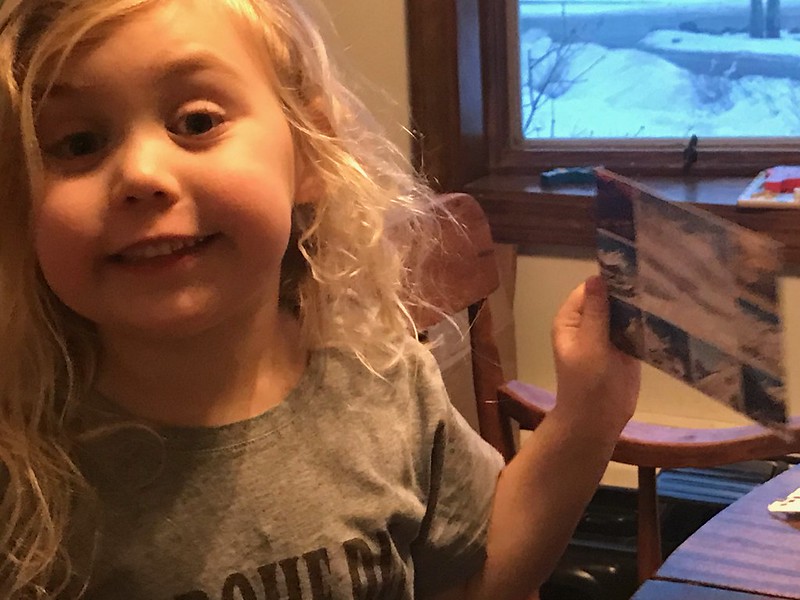 This year for Christmas Auntie Ang and Uncle Brock sent the kids money.  They did this to support our efforts to teach them how to handle the green stuff and to work on math skill.  One random week day we took off for a store with the money.  We had a great lesson with numbers, in responsible spending and in saving a little something in a rainy day fund.  And it was just super fun. 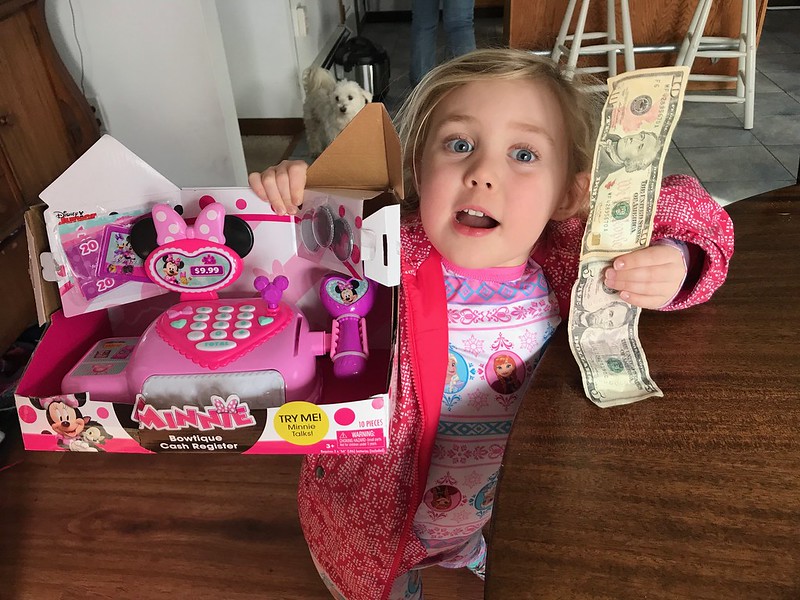 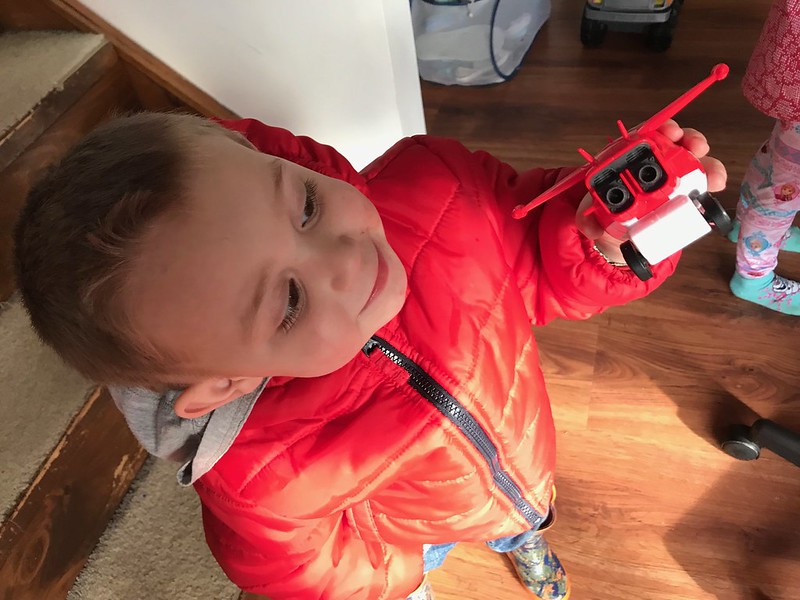 Don’t be misled – this child is not angelic.  He’s mischievous and he often finds himself on The Thinking Chair.  But sometimes he sure can channel a cherub.  This will come in handy later in life (I hope). 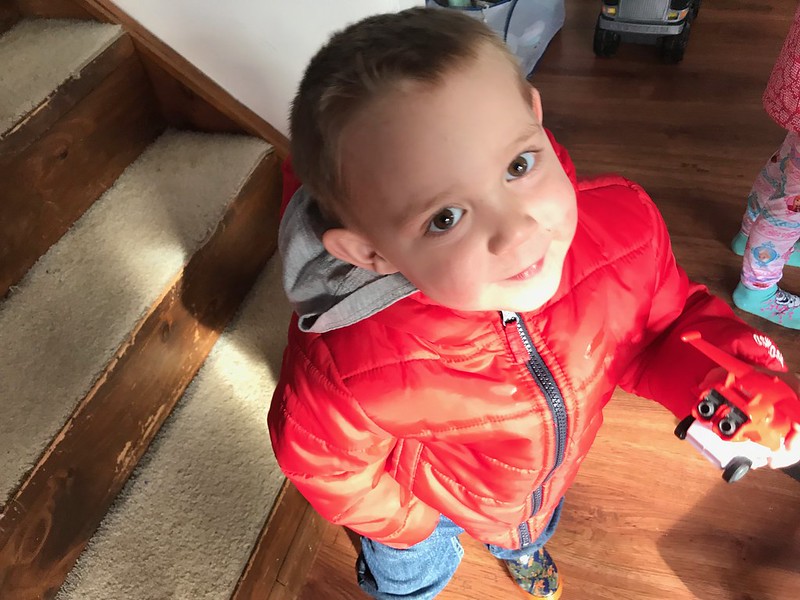 Nate spent his Feb vacation with us.  The big to-do was a Saturday spent playing Quest for the Antidote with none other than Tom (game creator!!!!).  I’m gonna call it like I see it – I’m the best stepmom ever.  I wouldn’t have thought to use the word “epic”, but since you brought it up…. 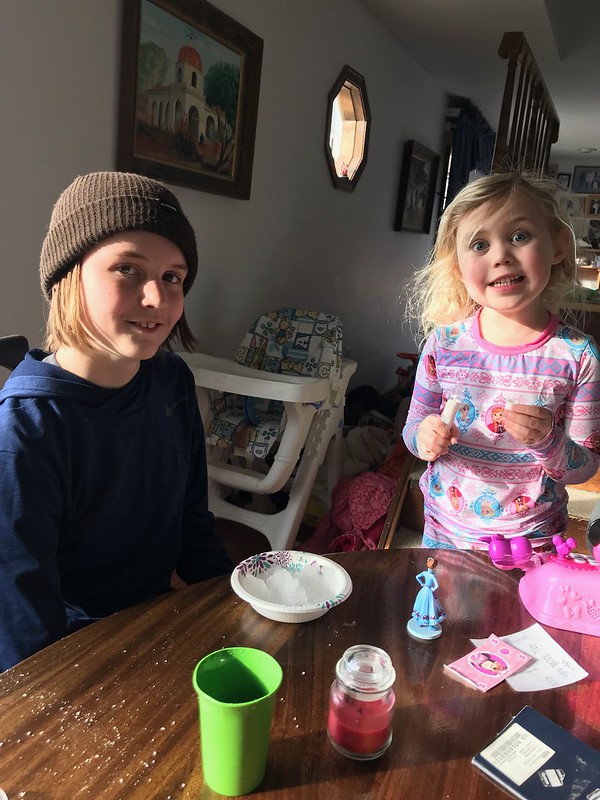 As this snowman melted, he looked remarkably like a character from Coco (one of the dead ones…. not good): 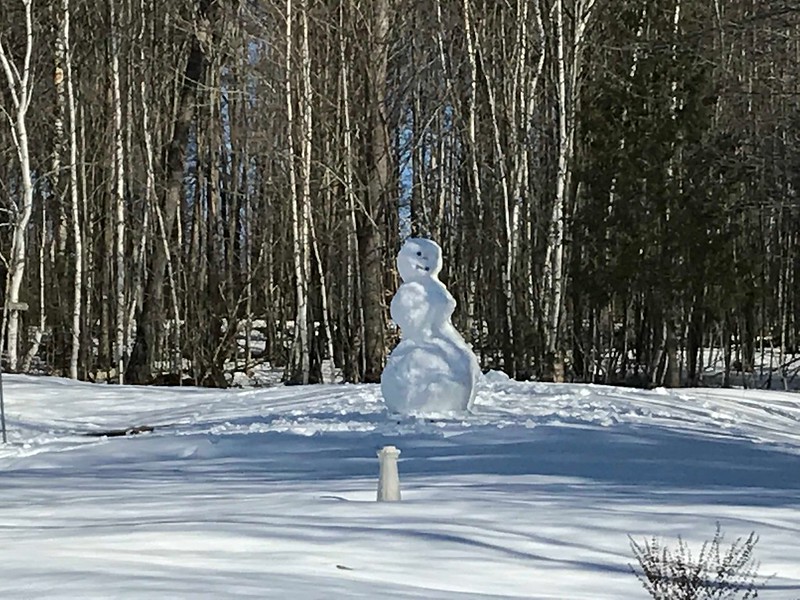 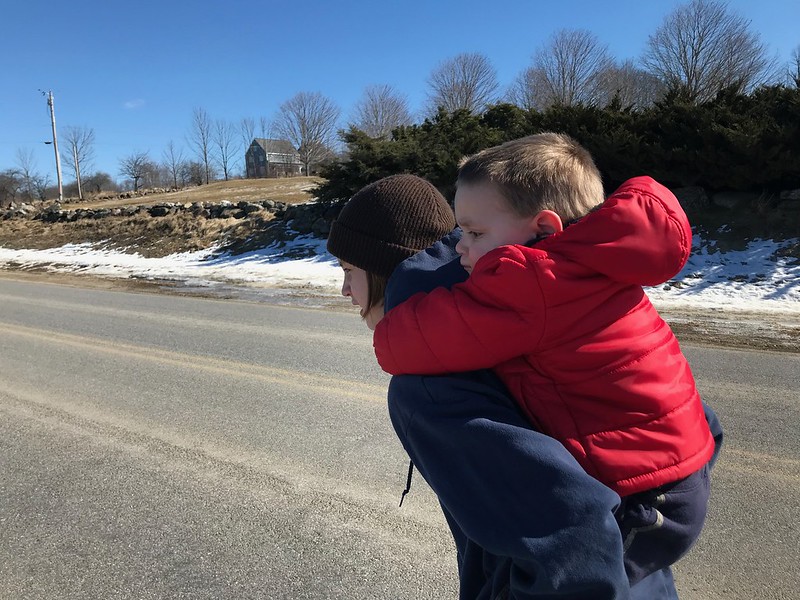 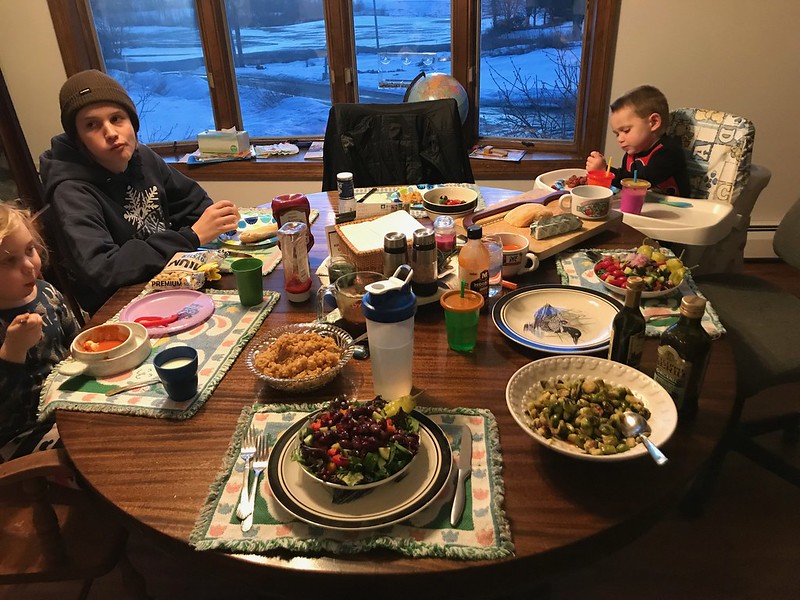 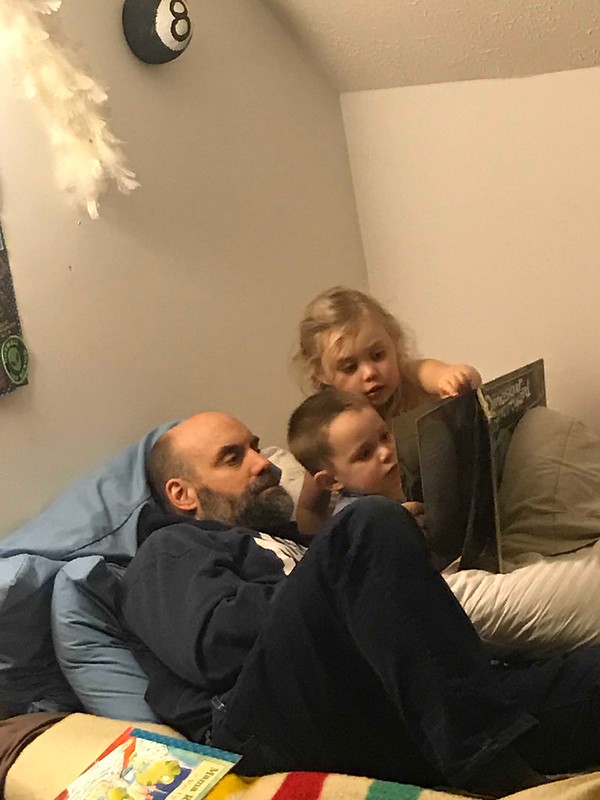 I believe the people that say your cell phone is listening to you all the time. Facebook knows your secrets. Glacier National Park was never on my radar. It seemed 'cold' and 'far away'. Being from Maine - who in...

Despite my best intentions and a lovely picture in my head of hopping around the globe with nothing but backpacks and a sense of adventure, not having a local "home" is rough.  That $%^&# is hard work!  If Thailand taught...

It turns out we were wrong - you and I.  In all fairness, not entirely wrong but we hadn’t hit the nail on the head.  Everyone thought the Chief looked so much like the RV in Breaking Bad… and wasn’t...